Milan: The Resurrection of the Rossoneri | The Analyst 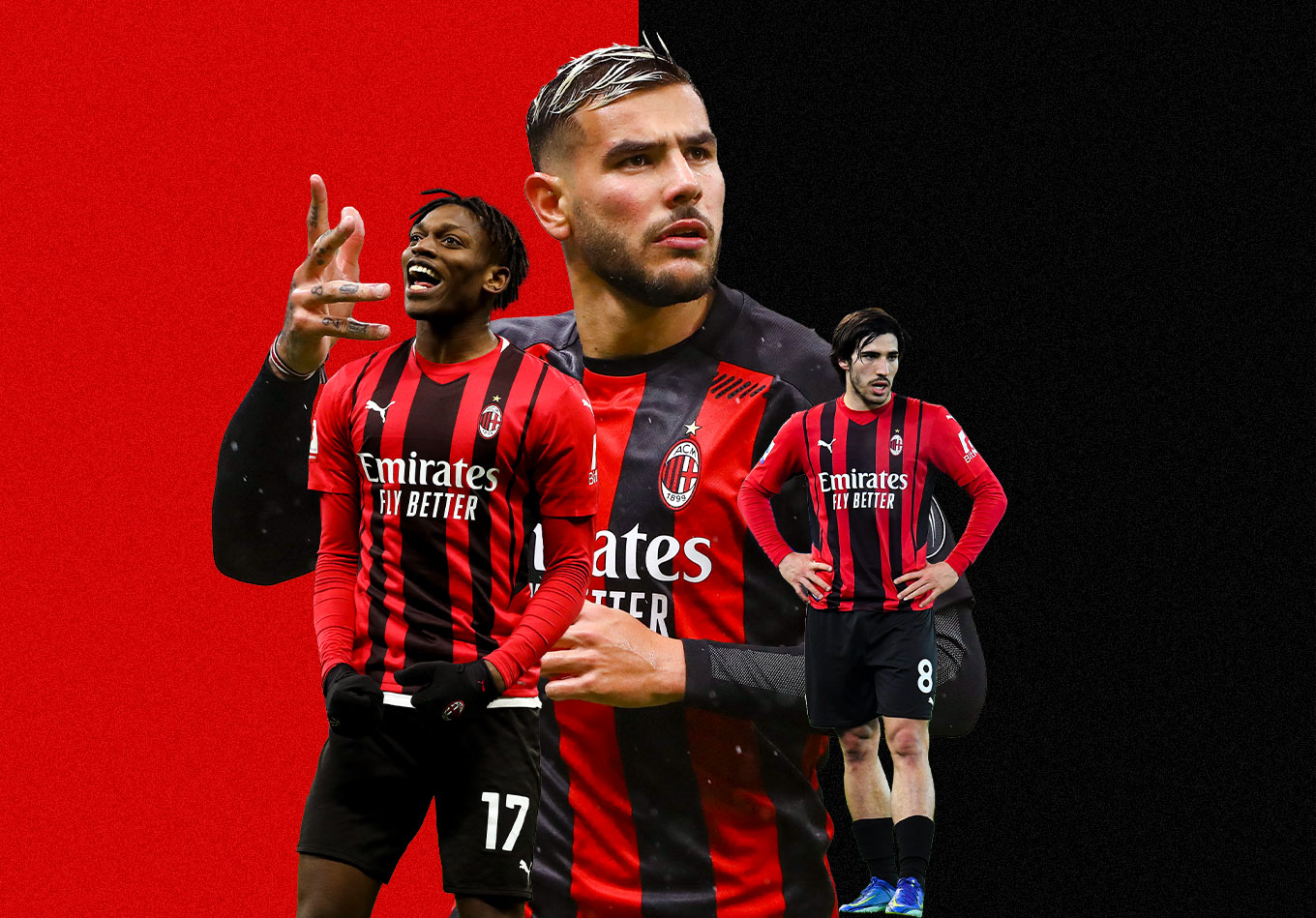 Milan: The Resurrection of the Rossoneri

The iconic red and black silks, the cross of Saint Ambrose painted across their crest, the magnificent amphitheatre that is the San Siro – Milan are a side steeped in European footballing history.

With seven European Cup and Champions League titles to their name, Milan are the second most successful club in the competition’s history behind only Real Madrid (13). The Rossoneri are also the third most successful club in Serie A, having won 18 league titles, yet the last of those came over a decade ago in 2010-11. Since Massimiliano Allegri departed for Juventus in 2014, Milan had seen seven permanent managers take to their San Siro dugout before the appointment of Stefano Pioli in October 2019. All this in addition to three different club owners in that same period, leading to a fall from grace for a club once considered among the European elite.

After successfully guiding the club to the summit of European football during his three decades in charge, owner Silvio Berlusconi opted to sell Milan to a Chinese consortium in April 2017. The three-time Italian Prime Minister had spent extortionate sums of his own personal wealth on the side and had been advised that it was no longer sustainable. As a result, Chinese businessman Li Yonghong took over the club for a reported €740 million. However, it transpired that Yonghong was reportedly unable to repay the high-interest loans that had allowed him to fund the acquisition of the Rossoneri. The club was then repossessed by Elliott Management, a US hedge fund, in a state of negligence and extreme debt.

Despite a minimal budget and insurmountable expectations, Allegri had been able to keep Milan competitive in his final few seasons at the club. Yet, unsatisfied with performances, Berlusconi decided that someone else could do better. In turn, a conveyor belt of managers descended upon the San Siro. Former players Clarence Seedorf, Filippo Inzaghi and Gennaro Gattuso all failed to reach the heights that they achieved as players with the Rossoneri whilst in the managerial hotseat, finishing as low as 10th under Inzaghi in 2014-15.

After a dreadful start to the 2019-20 campaign, the Milan hierarchy dismissed manager Marco Giampaolo and hired Pioli as a perceived stopgap until the end of the season. Talk of Ralf Rangnick taking charge of the Rossoneri at the end of the 2019-20 season was rife within the Italian press – in fact, it was even reported that terms between the two parties had been agreed. Pioli however, had other ideas.

The Italian guided Milan into the Europa League, as they embarked on a sensational run towards the tail end of the campaign, going unbeaten for the final 12 games of the season and picking up 30 points – the most of any side in Serie A during that period.

Subsequently, Pioli was given a contract extension and led Milan to a second place finish the following season. It was the first time that they had qualified for the Champions League in seven years, and yet there was still a lingering feeling of disappointment in the air. The Rossoneri had been top at the halfway stage of the campaign, having not lost a single game until early January, but the title was eventually clinched by their bitter city rivals Inter.

But after a productive summer, which saw the likes of Olivier Giroud, Mike Maignan and Fikayo Tomori all make permanent moves to Milan, optimism was high in the red half of the Italian capital for the season ahead. That perceived optimism has bore fruit, as the Rossoneri currently sit second in Serie A, level on points with first-placed Napoli. Inter, meanwhile, are just two points behind the pair with a game in hand.

Milan are in the midst of a three-way title race, with their points tally of 57 after 27 games their best record at this stage of a Serie A season since 2011-12, when they finished second. Most impressive of all, they’ve achieved this with a mostly young, rejuvenated squad that’s been built up with clever recruitment since Pioli’s arrival.

Milan have typically set up in a 4-2-3-1 formation under Pioli, whilst engaging in countless positional rotations throughout games. This has been uber-effective against the man-orientated pressing styles predominantly employed by sides across Serie A as markers are dispersed. The defensive midfield double pivot of Franck Kessie and one of Sandro Tonali or Ismael Bennacer is at the forefront of this, dropping into the backline to provide cover for the hazardous runs of full backs Theo Hernandez and Davide Calabria.

In Hernandez, the Rossoneri possess one of the most explosive attacking outlets in Serie A. The left back has been involved in 89 attacking sequences in open play that have led to a Milan shot this season in Serie A, with only Rafael Leao (99) having had more.

Hernandez and his full back partner Calabria are also integral to kick-starting Milan attacks. The duo make lung-bursting runs infield that often see them end up the furthest forward of any Milan attacker. Hernandez has progressed the ball further than any player in Serie A this season via his ball carries (163m per 90), while he’s also made the second most (12) progressive ball carries per 90 in the division, behind only Fiorentina’s Lucas Martinez (13.3). Hernandez has the joint-second most goal involvements (10) for Pioli’s side in Serie A this campaign, with only attacker Rafael Leao (11) contributing more.

Milan signed Leao from Ligue 1 side Lille in 2019 for a fee reported to be €28 million after bonuses – a significant sum considering the mounting debt issues that the Rossoneri faced. However, the acquisition was viewed as an investment, with Leao aged just 20 when making the switch to Italy. Yet following two seasons of inconsistent performances, with the Portuguese international failing to nail down a starting berth in the Milan attack, Leao has come into his own in the current campaign. The forward has netted eight goals in Serie A this term – a tally already higher than he managed in his two previous Serie A campaigns (six in both).

Leao has displayed frightening qualities on and off the ball. Deployed on the left wing, the forward has attempted (104) and completed (63) the most take-ons of any Serie A player this season. Of his 316 ball carries in Serie A across 2021-22 so far, 25 have led to a shot – no player has attempted more in this manner.

Leao’s exploitive runs in-behind opposition defences have also added a new dimension to Pioli’s side. If they are unable to play through the press, the Rossoneri possess the ability to go direct and play over the top. The tactic was clear to see in their goal in a 1-0 victory over Sampdoria last month. Goalkeeper Maignan played a searching ball into the Sampdoria half, which Leao then gathered and beat a defender before finding the back of the net – a win which sent the Rossoneri top of the table.

Gianluigi Donnarumma was a mainstay in between the sticks for Milan ever since making his debut as a 16-year-old in 2015. However, the shot-stopper left the Rossoneri for Paris Saint-Germain last summer on a free transfer. Replacing Donnarumma was no easy feat, yet the Rossoneri’s purchase of Maignan, fresh from winning the Ligue 1 title with Lille, has proved to be an astute signing. Across the big five leagues last season, no goalkeeper kept as many clean sheets as he did (21), while only three goalkeepers in those five leagues had a higher goals prevented total (7.9) than him based on Opta’s expected goals on target data.

Across 2021-22 to date, the 26-year-old goalkeeper has kept eight clean sheets in Serie A and has the third highest (77%) save percentage in the Italian top-flight. Maignan has been an impenetrable force in the Milan goal at times this term, yet he rightly benefits from the impressive pressing system in place within Pioli’s outfit.

No side have attempted as many shots following high turnovers in Serie A this season as Milan (51), whilst only Verona (255) have provoked more high turnovers in 2021-22 than the Rossoneri (250). Pioli’s side’s PPDA (opposition passes allowed per defensive action) is the second lowest (10) in Serie A this term, behind only Torino (9.2). In essence, this means that Milan are the second most aggressive pressers in the league. Winger Alexis Saelemaekers is one of the most important cogs within the Milan press and wins possession in the opposition third an average of 1.2 times per 90 – the fourth most of any player in Serie A.

English defender Fikayo Tomori has become a stalwart in the heart of the defence, heralding Milan technical director and former centre back Paolo Maldini as a driving factor behind his improvement on the pitch. Since the start of last season, Milan have been a much stronger team with the former Chelsea defender in the starting XI than without him. They’ve only lost four of the 35 matches that he’s started in Serie A, collecting an average of 2.26 points per game and have a win ratio of 69%. Without him in the starting line-up, those averages drop to 1.90 and 57% respectively.

Moving to Italy after finding gametime limited in London has without a doubt helped Tomori force himself firmly into Gareth Southgate’s plans ahead of the upcoming England squad announcement for the March friendlies.

With 11 games of the Serie A season remaining, Milan’s aspirations of conquering the Scudetto are in reach. Five of the Rossoneri’s last games are against sides who currently occupy the bottom half of the table, with this young side looking to win a first league title in over a decade. Only three teams have a younger average starting 11 in Serie A this season in Milan (26 years & 29 days), which is considerably younger than their title rivals Napoli (28y 157d) and Inter (29y 61d).

Pioli’s side’s mettle will be strongly tested on Sunday evening as they travel to Naples for a top-of-the-table clash with Luciano Spalletti’s Napoli. If the Rossoneri can navigate their way to a 19th Scudetto, it will proclaim the reawakening of Italy’s sleeping giant.