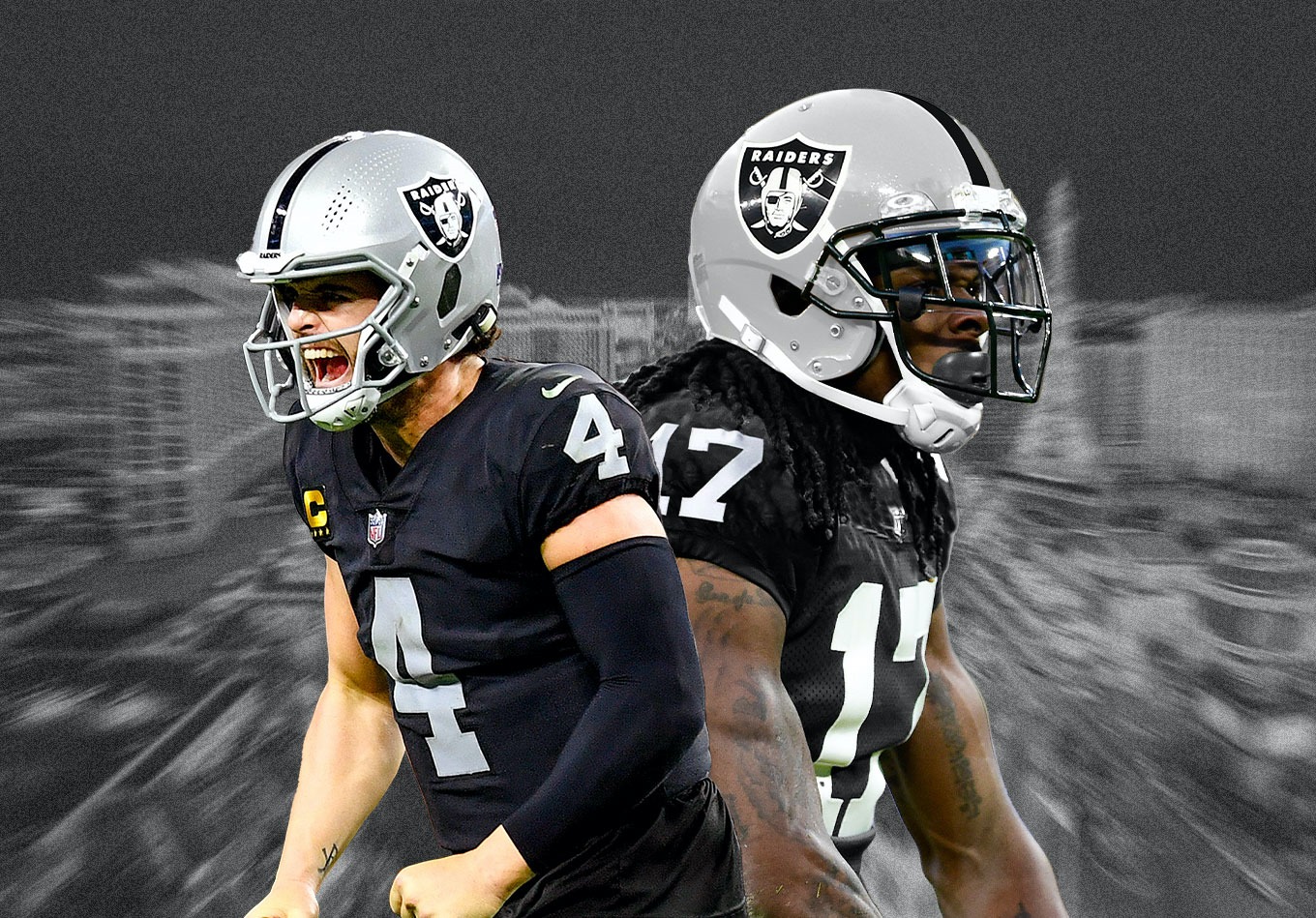 With the addition of Davante Adams, the offensive weapons are there. The offensive line may not be. But great quarterbacks frequently find ways to deal with imperfect parts. The question that remains is whether Derek Carr will ever reach such status. His college teammate has arrived, his contract negotiations are underway. After that, all that remains is winning – in an incredibly difficult AFC West.

Derek Carr has spent his entire career trying to convince the Raiders, and indeed the wider NFL universe that he is good enough.

Few quarterbacks to have been as consistent as Carr have inspired such little confidence, his name rarely mentioned among the top players at the NFL’s most important position despite him compiling some impressive numbers since arriving in the league.

Drafted in the second round in 2014, Carr has thrown for 31,700 yards in his career, the fourth-most in the league in that span. His 247 passing plays of 25 yards or more is a tally bettered by only four quarterbacks over the same timeframe.

Yet there are plenty of quarterbacks who excel at compiling stats and, for as tedious as the debate around whether wins should be considered a quarterback stat (they shouldn’t) is, part of the reason for Carr’s lack of recognition compared to his contemporaries is that he has not been able to elevate the Raiders, either in Oakland or now Las Vegas, to a playoff win.

In efforts to end that wait, there have been reported dalliances with other quarterbacks by the Raiders, most notably with Tom Brady before he signed with the Tampa Bay Buccaneers in 2020.

Las Vegas has also previously been seen as a destination for Aaron Rodgers and Russell Wilson but, while the Raiders will get to see new Denver Broncos quarterback Wilson up close twice a season, they are firmly tied to Carr, and have this offseason done an excellent job of setting him up for success.

In Josh McDaniels, they have paired him with one of the league’s premier offensive minds and, by acquiring college teammate Davante Adams in a blockbuster trade with the Green Bay Packers last week, the Raiders have given Carr the wide receiver many consider to be the class of the league.

With Adams added to an already exciting cast of offensive weapons, Carr has all the tools to definitively prove that, for the Raiders, he has always been the best man for the job.

The timing of Carr’s reunion with former Fresno State teammate Adams could hardly be better, as he is coming off arguably the finest season of his career.

Among quarterbacks with at least 200 pass attempts, Carr finished third in well-thrown percentage. Trailing only Joe Burrow and Ryan Tannehill, he delivered an accurate, well-thrown ball on 81.6% of his passes.

None of the eight quarterbacks to average more air yards per attempt than Carr’s 8.29 had a superior well-thrown percentage, his ability to blend ball placement and downfield upside further illustrated by his 67 completions of 20 yards or more in 2021. Tom Brady (75) was the sole quarterback to end the season with more. Carr achieved those feats despite tight end Darren Waller missing six games of the season and the Raiders losing wide receiver Henry Ruggs III after his November arrest.

He deserves great credit for continuing to thrive in a season that saw head coach Jon Gruden resign in disgrace and the Raiders playing the majority of the season under the interim leadership of Rich Bisaccia. Now with McDaniels at the helm, Carr has a head coach to maximize his skill set and, with Adams joining Waller and Co. on offense, undoubtedly the most talented supporting cast of his career.

It is extremely difficult to overstate the importance of Adams’ acquisition.

Over the past three seasons, only one player has racked up more receiving yards than Adams’ 3,924. The man who represents his competition for the title of best receiver in the NFL, Cooper Kupp (4,082). Adams’ 34 receiving touchdowns in that span are second to Mike Evans (35), while no player has averaged more receiving yards per game than his 93.4 since 2019.

Producing a burn, which is when a receiver wins his matchup with a defender on a play where he is targeted, on 65.6% of his targets, Adams was comfortably above the league average for receivers with at least 100 targets of 62. While his position as the NFL’s top wideout may be up for debate, his status as one of its elite separators is not in question. Only four receivers (min. 100 targets), one of which was Kupp (4.0), averaged more burn yards per route than Adams (3.5) in 2021.

Second (3.4) and first (3.9) in the same metric in 2019 and 2020, Adams’ consistency in creating separation from coverage is unmatched, and he should benefit from playing in an offense stacked with bonafide weapons worthy of defensive attention.

Despite missing time, Waller still ended the 2021 season fifth among tight ends (min. 50 targets) in burn yards per target (11.91) and fourth in burn yards per route (3.0), his size, athleticism and ability to line up at every receiving position on the field making him a mismatch nightmare for defenses when at his best. Only two tight ends, Travis Kelce and Mark Andrews, have more receiving plays of 20 yards or more since 2019 than Waller (43).

Carr also has an excellent rapport with Hunter Renfrow. They combined for nine touchdowns in 2021, with three of those scores for the diminutive wideout coming on third down.

Yet the nickname ‘Third and Renfrow’ may have been inappropriately applied. Not because Renfrow isn’t great on third down (18 of his 33 third-down targets last year went for first downs), but because teammate Bryan Edwards might be even better.

Targeted just eight times on third down, six of those throws from Edwards to Carr were completed for a first down. Overall, Edwards had 76.5% of his catches result in a first down last season, the second-best ratio in the NFL.

At 6-foot-3 and 215 pounds, Edwards is a still under-utilized physically imposing ball-winner. Between Adams, Waller, Renfrow and Edwards, Carr now has a receiving corps to stack up with any other in the NFL.

Throw in a running back in Josh Jacobs who displayed his ability to overcome sub-standard blocking by averaging 3.38 yards per carry on runs where there was a disruption by a defender, the sixth-most in the NFL in 2021, and Carr appears to have everything at his disposal to helm an explosive and dominant offense in 2022. That is presuming, of course, that Carr can re-establish his college connection with Adams.

But there is a risk any potential offensive surge could be cancelled out by the improvements made by their rivals in what now looks a hellish AFC West.

The trade for Adams was just the latest move in a series of blockbusters from AFC West teams. In respective offseason efforts to end the divisional superiority of the Kansas City Chiefs, the Denver Broncos and Los Angeles Chargers each made significant additions to their rosters.

In essence, the Raiders now have to compete with three elite quarterbacks in Patrick Mahomes, Wilson and Justin Herbert, all of whom have seen their teams stack the deck around them.

Carr has previously gone blow for blow with both Mahomes and Herbert and won, most famously in Week 18 last season in the epic overtime game that almost ended in a tie that would have sent both the Raiders and Chargers to the playoffs.

However, with the Chargers pairing Mack with another fearsome pass rusher, Joey Bosa, and the Chiefs retaining Frank Clark on a defensive line that also features Chris Jones, Carr’s hopes of getting the best of each of those signal-callers could be compromised by the play of his offensive line.

The Raiders’ O-Line ranked 21st in pass block win rate last year, with Carr pressured 285 times, the third-most in the league behind Matt Ryan (319) and Josh Allen (312), and yet that area of the team has gone largely neglected in the offseason.

Great quarterbacks can overcome shortcomings at other positions, and Carr did so last year in leading the Raiders to the playoffs. Though he may have improved help from a defense that looks better prepared to deal with the threat of opposing offenses after the hire of Patrick Graham as coordinator and the additions of veteran edge rusher Chandler Jones and cornerback Rock Ya-Sin, the reality is Carr will likely have to raise his game again if the Raiders are to enjoy postseason success.

The Raiders may look to use what draft capital they have left to improve on the offensive side of the trenches, but the onus is firmly on Carr regardless of any further moves to come. His is a career that has been spent trying to prove he belongs in the conversation as a top-tier quarterback. He built a compelling case last season, but now flanked by offensive talent ready-made to help him keep pace with Mahomes, Herbert and Wilson, 2022 is the year where he must definitively win the argument.