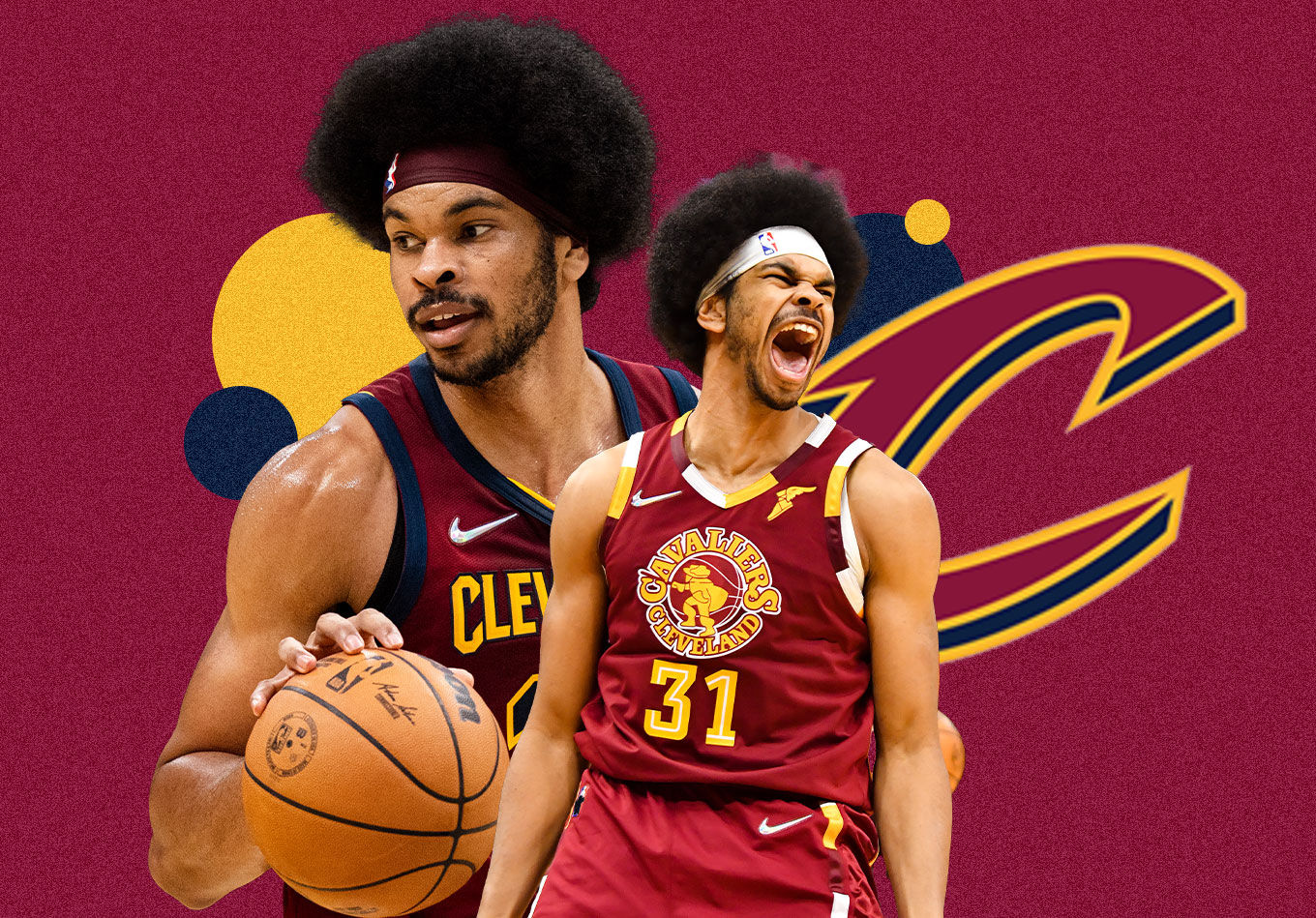 This past offseason, Jarrett Allen and the Cleveland Cavaliers agreed to a five-year, $100 million deal. Such a move was met with skepticism from certain corners of the basketball world.

People cited the arrival of third overall pick Evan Mobley, a supremely talented prospect who might be maximized long-term at center. They worried Allen, while good, might not be good enough to commit half a decade toward. Others were concerned the two big men couldn’t aptly coexist.

None of the points were entirely unfounded. But they felt a little like getting bogged down in the nitty gritty, while ignoring the fact Cleveland, a non-destination market, retained an excellent young player at a reasonable price point.

Through half the season, all of those sentiments have been extinguished.

Mobley is cruising as the NBA Rookie of the Year favorite and an ironclad future superstar. The Cavs are outscoring opponents by 6.0 points per 100 possessions when Allen and Mobley share the floor. Allen has made the leap from young, rising center to deserving All-Star. Despite season-ending injuries to Collin Sexton and Ricky Rubio – as well as enduring other ailments and absences – Cleveland is the six seed at 24-18, destined for its first playoff appearance since 2017-18.

As arguably the team’s best player, Allen rests at the heart of this prosperity. Across 34 games, he’s averaging career highs in points (16.9), rebounds (10.9), assists (1.8), blocks (1.5), steals (0.9) and true shooting percentage (71.7). When All-Star reserves are announced next month, Allen figures to be among the choices out East and rightfully so.

Some of his superlative production stems from playing a career-high 32.6 minutes per game. Per 100 possessions, his rebound, assist and block numbers don’t stand out from prior years. Allen, nonetheless, is certainly building upon the foundational skills that enticed Cleveland to keep him around. He’s one of the league’s most improved players, enjoying substantial strides on both sides of the ball.

After serving as a good defender his first four seasons, he’s putting together a case for an All-Defensive Team honor in 2021-22. Trotting out three 7-footers most nights, Cleveland owns the NBA’s fourth-ranked defensive in the East, thanks in large part to Allen’s exceptional contributions. He’s 10th in the league with a plus-1.7 defensive DRIP, which is a projection of a player’s contribution to team plus-minus per 100 possessions on defense, among players with at least 800 minutes this season.

He’s emerged as one of the absolute best rim protectors this year and is perhaps the best thus far. Opponents are shooting 16.7% worse than their average on shots within six feet of the rim, the biggest dropoff among players who’ve contested at least 100 attempts, according to NBA.com.

Allen has notoriously been on the wrong end of various poster dunks throughout his career but that’s because he’s always willing to make a play on the ball. That willingness to never embrace a business decision benefits him and the Cavs. He covers ground rather quickly, is hyper-aware as a helper, is a verticality practitioner and has a 7-foot-6 wingspan that looks more like 8-foot-6 when he’s turning away oncoming scorers.

At times this season, he’s achieved a hallmark of vaunted rim protection: prompting a pass with his mere presence and rejecting whoever receives said pass. He routinely keeps his hands high to deter shots, too.

His tendency to play with active hands extends to his pick-and-roll coverage, where Allen is menacing. It’s also a platform where he showcases his improved mobility, fueled by quick feet and the ability to concisely flip his hips in response to changes of direction.

Cleveland demands much of its big men defensively and he’s proven capable. He can play at the level of the screen to contain drives, operate as the weak-side man to leverage his size and length, and is always maintaining lively hands. Between rim protection and ball-screen exploits, he’s been a certifiably dominant interior defender.

Because Allen spends a chunk of minutes alongside another elite interior defender in Mobley, he’s tasked with comfortably functioning on the perimeter for stretches. His leap in that regard has smoothed some of the concerns between their games and amplified the profits of the pairing.

When switched onto ball-handlers, he fares rather well. He’ll play the nail as though he’s a wing defender asked to frustrate drivers with stunt-and-recovers. His swift hands and fluidity against changes of direction are vital. Some of his newfound affluence and growth working outside of the paint is revealed through a career-high 1.3 steals per 48 minutes.

If Allen were resigned to the interior to thrive defensively, he and Mobley wouldn’t mesh as seamlessly. But in many senses, those two are largely interchangeable in their roles together, which renders the Cavs’ defense all the more stifling.

The contexts in which each excels are fairly broad. It was expected for Mobley. Yet it’s been a bit of welcomed and pivotal development for Allen, allowing this team’s atypical, Tower City defensive approach to shine.

Despite shouldering such significant and wide-ranging defensive responsibilities all over the court, he almost never fouls. Because he’s disciplined, astute positionally and remarkably pointed in the use of his lurking claws, he averages just 2.8 fouls per 100 possessions.

Great defenders master the art of impacting possessions without jeopardizing their playing time due to potential foul trouble. Allen has accomplished that dynamic this season and it’s quite impressive.

While he predominantly fits the criteria of rim-runner, it’s a term that often implies severe limitations and ignores the nuances of the archetype. Yes, his primary duties are to set screens and finish plays around the rim. But he’s more than that, and running to the rim extends well beyond merely catching the ball and putting it in the hoop.

Some guys in that role struggle mightily converting in traffic or setting screens (Daniel Gafford, Mitchell Robinson and Robert Williams come to mind, though Williams is a bit different as a fabulous passer). They lack dynamism. Allen is quite proficient in all three areas and provides dynamism.

He makes contact on his picks and will flip the angle or re-screen when necessary. Equipped with refined patience and savvy, he isn’t neutralized by a looming defender between him and a bucket; he’ll bust out a shot fake and extend around or through them to score. Putting the ball on the deck for a dribble or two isn’t a nonstarter like it is for others in a similar position. He’s also a heady off-ball mover and smartly drifts into space to conjure up passing windows for teammates.

Most importantly, he’s shooting a staggering career-high 75.8% at the rim. For reference, Rudy Gobert, the man renowned for converting almost everything near the hoop, is shooting a career-high 72.6% there this season.

Passing maestros like Rubio and Darius Garland undoubtedly aid Allen’s production, but being a trusty release valve for them, given their interior scoring limitations, is incredibly valuable. Many offenses and ball-handlers are hamstrung without a reliable rolling threat.

Allen ensures those two can focus on their strengths as brilliant facilitators. He’s formed devastating chemistry with each of them (here’s to a speedy recovery, Ricky) and understands the vast ways he can make himself available as a roller.

Assuming notable scoring volume is a skill because it typically implies some level of useful versatility or preeminence in specific skills. Most guys who embody a role similar to Allen’s cannot carry a scoring load that produces 16.9 points per game on top-tier efficiency. That’s why they’re featured less prominently.

Wielding patience, off-ball savvy, effective screen-setting and unbridled dominance as a play-finisher, Allen is capable. It’s part of what differentiates him from the dime-a-dozen, non-All-Star rim-runners.

By no means is he a guy Cleveland calls upon to backpack the self-creation load, though maturation in that regard comprises some of his All-Star candidacy.

He’s a master of the pivot, dupes defenders with up-fakes and has incorporated a silky hook shot. His preferred offices are the elbow and low block, and he can finish with either hand. The growth isn’t overwhelming, but it exists and further solidifies his All-Star efforts this season.

Outside of some self-creation chops, Allen distances himself from the rim-running pigeonhole with passing vision. Cleveland can trust him as a decision-maker in spurts. While Mobley is its ideal distributor on the short roll or from the high post, Allen is a viable substitute.

Those two work the high-low game keenly. Allen hits cutters and shooters for good looks. When he’s asked to be the trigger man, he won’t lose his wits if the initial option isn’t available. Even if plus passing isn’t the lead singer of his game, it’s still a member of the band.

Nearly three months into the regular season, the Cavs sit just three games back of the two seed, 2.5 back of the three seed and 1.5 back of the four seed. Hosting a playoff series this spring is a legitimate possibility.

Driving that possibility is the three-headed, star-laden core of Allen, Garland and Mobley. At least one of them should join next month’s festivities as an All-Star. Maybe even two of them receive the invite to stick around Cleveland over the break. If it’s only one, though, Allen is the guy. He’s an elite defender and finisher. He’s refined his defensive versatility and individual scoring.

Only a handful of big men have been better this season, and they’re all locks for the 2022 All-Star game – a recognition Allen’s play and development also warrant.

Anything less undersells him.