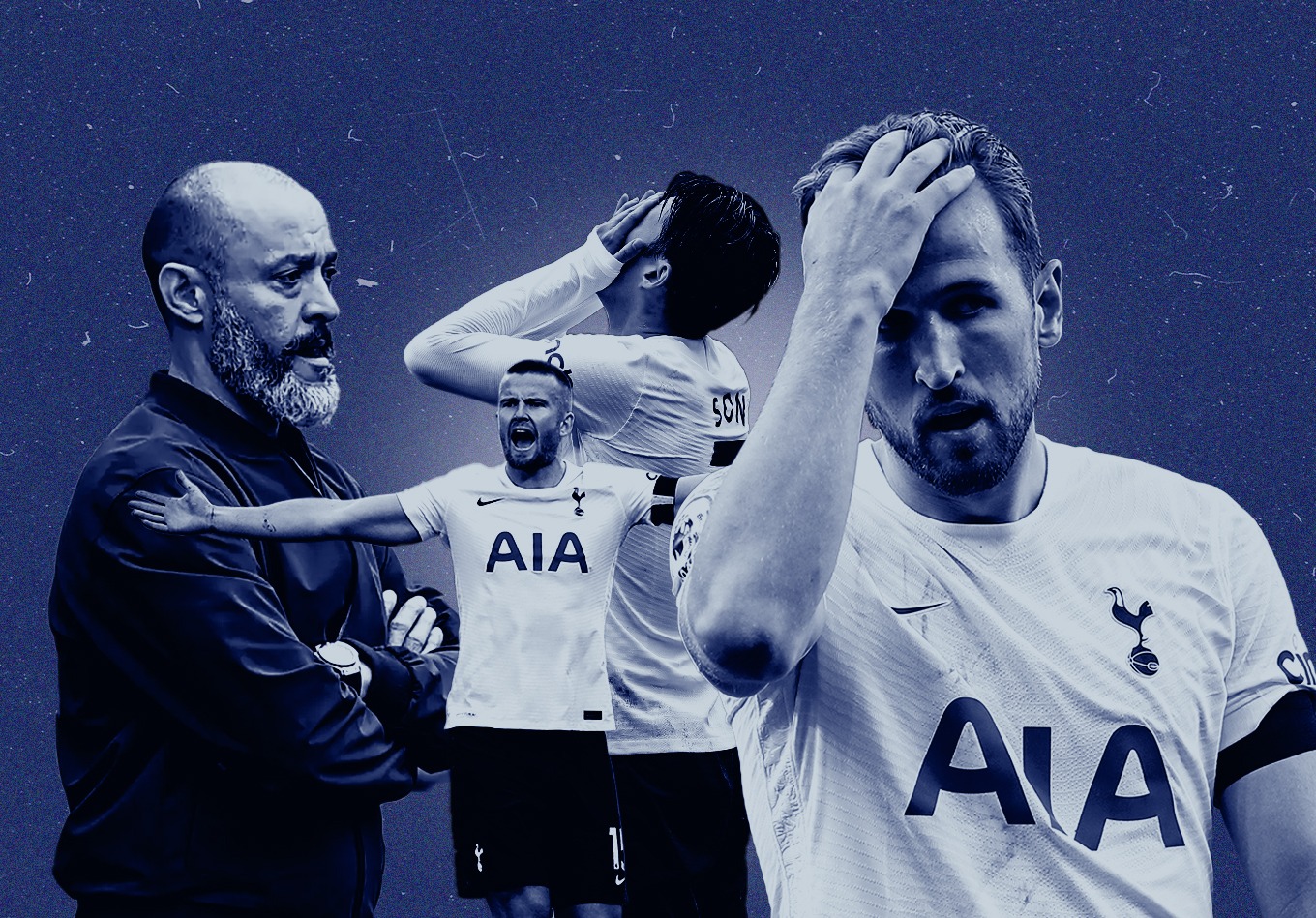 Tottenham Hotspur spent the summer drifting through an identity crisis, clutching at Super League status even as they were being turned down by a series of middling managers. They are a club in limbo; ungrounded, left a bit shaken up by the final months of José Mourinho, the scandalous Super League fiasco, and Harry Kane’s transfer saga.

Chaos, and the absence of strong leadership, tends to trickle down from the top, and so it is hardly surprising that Spurs’ off-field issues should be so neatly reflected on the pitch. In short, Spurs are confusing to watch and tactically untethered under Nuno Espírito Santo – who understandably seems unsure quite what to do.

Levy promised attacking football and hired another Mourinho type. He promised to honour the club’s DNA and appointed a director of football with a clear preference for reactive football. No wonder Nuno’s team keep lurching between ideals, one week aligning with his instincts – a safe mid-block, minimal pressing, sharp counters in the dribble, long-ball diagonals switching the play – and the next producing a shadow imitation of Mauricio Pochettino’s hard-pressing, Bielsa-influenced football.

Let’s start by looking at Spurs off the ball.

Like Nuno’s Wolves, on the whole, Tottenham are not pressing high but sitting off: their PPDA of 12.7 is mid-table, with Spurs ranking in the top five for pressures in their own third but 13th and 17th in the middle and attacking thirds respectively. To illustrate this further, only five sides have completed fewer high turnovers – i.e. winning the ball back within 40m or less from the opponent’s goal.

Splitting their pressures into thirds this seasons paints a clear picture of a side willing to sit back and let teams come onto them.

This is creating a passivity in the challenge, a sense of Spurs shimmying from side to side without engaging confrontationally enough to disrupt the opposition, which partly explains why they face 16.6 shots per game, the second-most in the division behind Leeds.

But the problem is more to do with the shape of Nuno’s ultra-narrow 4-3-3 in which the forward line rarely drops back, leaving the wide areas exposed. It worked very well blocking the central column against Man City on the opening day but not so much since then.

Spurs have faced the most crosses this season (123) and notably were overpowered by wingers in the fortunate 1-0 win over Wolves and 3-0 defeat to Crystal Palace.

Put these two defensive issues together, a passive shape and open flanks, and it’s no surprise opponents are building momentum and peppering Hugo Lloris’s goal.

On the ball, things aren’t any better. Spurs rank second bottom, just ahead of Southampton for passes that bypass a five opponents or more, reflecting their serious difficulty in playing through the lines with a coherent structure. Alarmingly, they are averaging just 8.4 sequences of play where they string 10 or more passes together per game – over 50% fewer than the 12.9 under Mourinho last season.

Tottenham’s problems in this regard are inextricably linked to their defensive shape. By starting deep and waiting reactively for fast breaks the man on the ball has few forward passing options.

Unsurprisingly, this has led to a dearth in creativity: Spurs have registered the fourth fewest open play shots (50), and have had the fourth-fewest touches in the opposition penalty area, with only Norwich, Watford, and Brentford performing worse.

Aside from the essential structural issue, Spurs are not helped by Nuno using Pierre-Emile Hojbjerg and Dele Alli as the eights either side of a defensive midfielder, the former lacking the technical quality and the latter unfamiliar with the role. Tanguy Ndombele and Giovani Lo Celso, who offer quicker thinking and greater press-evasion in tight spaces, are notable upgrades and should be utilised more often in the coming weeks.

Certainly, Spurs could have done with these two in the infamous 3-0 defeat to Crystal Palace, in which Patrick Vieira’s assertive press in central midfield saw Nuno’s side retreat into themselves, unable to play with any kind of fluency.

All of this is pretty damning, even if it is early days. But now comes the confusing part. In the games against Arsenal and Chelsea, played just eight days apart, Spurs could not have been more different tactically.

These two matches tell us Nuno is stuck, unsure of how to proceed and accidentally channelling the tortured, chaotic energy of the club over these last few months as his team pinball across the division.

The Chelsea performance, retrospectively criticised for the manner of Tottenham’s collapse, was very strong in the first 45 minutes. Spurs pressed hard, outnumbering Chelsea’s midfield as Harry Kane and Lo Celso dropped between the lines to provide Dele and Ndombele with that vertical, progressive pass they have been missing.

It didn’t work, and it meant that as soon as Arsenal recovered possession Emile Smith Rowe and Martin Odegaard had a wide-open midfield through which to run. Looking at their defensive actions in that game shows how much space Arsenal enjoyed in the centre of the park.

Confusion runs through Tottenham like a stick of rock at the moment, and unsurprisingly the manager – known to be sixth or seventh choice for the job, hired to deploy tactics entirely at odds with his preferences, and overseeing a team still jittery after the Mourinho, Super League, and Kane debacles – is finding it hard to settle.

But that does not mean he is doomed, rather he ought to pick a lane – and although supporters would prefer Pochettino 2.0, Nuno’s best option is to go all-in with his tried and tested methods. In other words, he should implement his Wolves-era 3-4-2-1.

A surprisingly effective centre-back partnership of Eric Dier and Davinson Sanchez could be made even stronger with Cristian Romero, and if Nuno teams don’t tend to progress the ball confidently through midfield then sacrificing one of them for a central defender shouldn’t be a problem.

There is enough quality in the Spurs ranks to emulate how Ruben Neves and João Moutinho broke up play before hitting raking long balls into the forwards, while in Heung-Min Son and Lucas Moura, Nuno has the perfect counter-attacking weapons to sit either side of Harry Kane, playing the Raul Jimenez role.

Nuno and Spurs will be grateful for the upcoming international break; for the space to take a breather, to have a rethink. When the players return, Kane’s hat-trick against Mura and Son’s brilliance against Aston Villa ought to be used as the catalyst to begin a new era of self-assured football led by a singular vision from the dugout.

No more confusion, no more hesitating between a rock and a hard place. It’s time for Nuno to stamp his tactical authority onto this team.