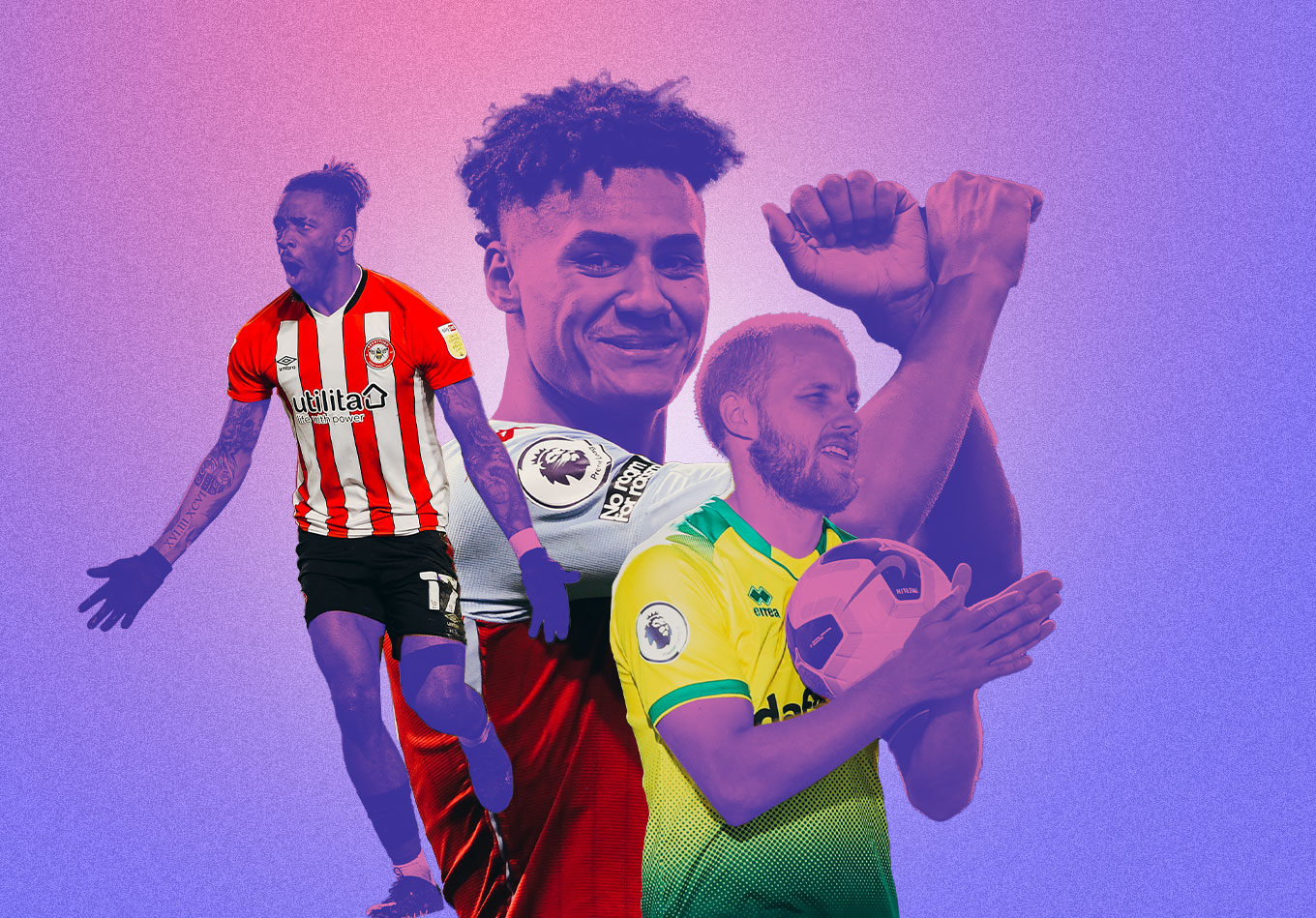 The Step Up: Can Ivan Toney Be as Prolific in the Premier League?

There are many ways a team can earn promotion to the Premier League, but a reliable goalscorer is usually a factor. Across the last five Premier League seasons, 12 of the 15 promoted teams have come up after producing one of the top 10 scorers in the Championship, and sometimes more than one. And yet, from 2016-17 through to 2019-20, only two strikers ended up in the top 10 in the top-flight after spending the previous season in the second tier: experienced head Glenn Murray in 2017-18 and Tammy Abraham, given the benefit of Chelsea’s supply line in 2019-20 after banging them in for Aston Villa in their promotion campaign.

Last season, though, something changed. Not one but two men kept it up in the top division, and neither felt like a sure thing before the first ball was kicked. Ollie Watkins was an unknown quantity at the highest level, and a relatively late bloomer before becoming (at the time) Aston Villa’s record signing. Patrick Bamford had more Premier League experience, but this wasn’t looked at as a good thing given the frontman’s travails before helping Leeds to the promised land. And yet, both thrived and then some. Watkins hit 14 to ensure Villa went from relegation battlers to a comfortable mid-table side with aspirations of climbing even higher. Bamford, meanwhile, scored 17 – more than his tally in the promotion season, and from fewer appearances.

So, what was different? Was the Premier League becoming easier for goalscorers? Was the impact of the shortened pre-season or the absence of fans making the campaign an anomaly? And, crucially, can we realistically expect last season to be the start of something as we welcome more high scorers to the top flight? Ivan Toney scored 33 goals in the Championship last term and will be leading the line for Brentford in their maiden Premier League season, while Teemu Pukki (26 goals) and Emi Buendía (15) will have a second crack at the division after dropping down with Norwich in 2020, albeit no longer as teammates. We may even have a fourth Championship hotshot if, as reported, Adam Armstrong takes the momentum of his 28-goal Blackburn season to St Mary’s as a replacement for Danny Ings. So, based on what we’ve seen in the past, what makes a Championship striker better placed to succeed or fail after making the jump?

The idea of defences being better at a higher level is unlikely to be disputed too loudly, and the addition of a deeper and higher-level supply line is only going to bridge the gap so much. And that’s before we get onto the clubs who add an extra striker to their ranks in preparation for facing those better defences. As an example, as good a Championship poacher as Billy Sharp was, there was rarely as much danger of him being relied upon quite as much post-promotion once Sheffield United had added Oli McBurnie and Lys Mousset to their attacking ranks (also Richairo Zivkovic in January, though there’s no guarantee even he remembers moving to Bramall Lane).

Sharp played 34.6% as many minutes in the Premier League as he did in the second tier, making it harder to hone that great intangible of momentum, but even within that context, his numbers dropped off substantially: a drop from 23 goals to three betrayed the expected goals a little, but not too much (20.9 vs 3.8), while Sharp’s non-penalty xG per 90 minutes fell by close to half. McBurnie, meanwhile, illustrated another side of the promoted striker drop-off: simply letting the variance right itself while also getting fewer chances in a team that was more conservative than his Swansea 2018-19 outfit even before climbing up to the top division. If you’re playing less, for a team that creates less, any failure to maintain an independent hot-streak will stick out like a sore thumb.

While we know it’s tough to score freely for a newly promoted side as they adjust to fighting for points every single week instead of rolling opponents over, perhaps we don’t appreciate quite how hard. Just 15 men have scored 15 or more goals for a newly promoted side in the Premier League era, and just nine since the turn of the century (there are more if you look further back, but if a promoted striker replicated Dixie Dean’s 45-goal season from 1931-32 then we’d have a lot of questions).

Within that group, you have a curious mix – late bloomers with a past in the lower leagues (Grant Holt, Charlie Austin, Rickie Lambert), mid-season arrivals during a promotion campaign (Marcus Stewart, Yakubu) and players who banged them in on the way up before continuing the trend post-promotion (Bamford, Andrew Johnson, Odion Ighalo). Only one of the nine, Peter Odemwingie at West Bromwich Albion, was a case of a marquee signing hitting the ground running.

For a while in the 2019-20 season, it looked like Pukki would become another member of the Johnson-Ighalo club. His 29-goal season as Norwich stormed to the title came as a surprise to some, but his fast start made some of us question why his Premier League bow hadn’t come sooner. Or, in other words, whenever Pukki wasn’t on our screens, we were all asking ‘Where’s Pukki?’.

And then he just, well, stopped scoring. All of the Finn’s nine non-penalty goals in the Premier League came before Christmas, and he failed to score at all in his last 13 appearances. His non-penalty shot conversion percentage came in at 11.5%, compared to 20.3% in the Championship, and while his xG/shot didn’t fall by all that much, he was also taking fewer shots in a team whose decline began to act as a self-fulfilling prophecy as the season drew on.

As for those poised to join the Premier League party in 2021-22, Toney stands out if only for his importance to Brentford on their way up. The former Newcastle United man contributed a huge 41.8% of the Bees’ goals, comfortably north of the percentage contributed by Watkins the previous season and Neal Maupay (34.3%) the season before that.

His fortunes in the upcoming season may well be tied into those of his club: of the two strikers this century to tick the boxes marked ’15 or more goals’ and ‘more than 40% of his team’s goals in the Premier League’, both – Andrew Johnson and Charlie Austin – suffered relegation. The sample size isn’t large enough for anything especially conclusive here, but one wonders if a struggling team is less likely to have a variety of attacking outlets and more prone to simply giving the ball to the guy they trust to find the net in a ‘top scorer go brrrrr’ situation.

Of the players preparing to make the step up, only Pukki has a better non-penalty xG/90 return than Toney, though Armstrong could make it two if he takes his 0.60 npxG/90 from Blackburn to Southampton. All will be hoping they’re less Sharp or McBurnie and more Abraham or Ché Adams, two men who managed to up their xG after moving up a division, albeit with varying results in 2019-20. Adams is a curious case, having notably taken months to get off the mark after moving from Birmingham to Southampton, and one wonders how much of this comes from not immediately being the main man up front for his new club.

The concept of pressure is another element we can’t ever fully quantify, and it’s impossible to wholly gauge the difference between a player attempting to impress new supporters versus one whose goal is to continue being the saviour of a group of fans used to seeing him do incredible things for their team. And as much as we’d love to simulate an alternate reality where Toney spends next season elsewhere in the Premier League – or, indeed, one where the 2019-20 version of Tammy Abraham is being supplied by Jack Grealish and Anwar El-Ghazi rather than Mason Mount, Christian Pulisic and Willian – technology sadly and consistently refuses to comply with our niche and ridiculous whims.

As much as we’d love to say there’s a definite pathway from Bamford’s and Watkins’ exploits last season to those of one of the new boys this time around, it’s inevitably not quite that simple. We can, however, identify a few things to keep an eye on.

The likes of Pukki and Toney shouldn’t be surprised if they receive fewer and lower-quality chances against elite defences, and when we’ve seen several teams drop £20m or more on new defenders in this window alone, the gap between the top and second tier is self-evident. However, chances will be there, and goals can still come without the teams showing the outright dominance they did on the way up.

There will always be surprises, in both directions, and now it’s up to some prolific lower-league men to show us they’re determined to be the good kind.