Bundesliga Season Preview: Can Anyone Stop Bayern? | The Analyst 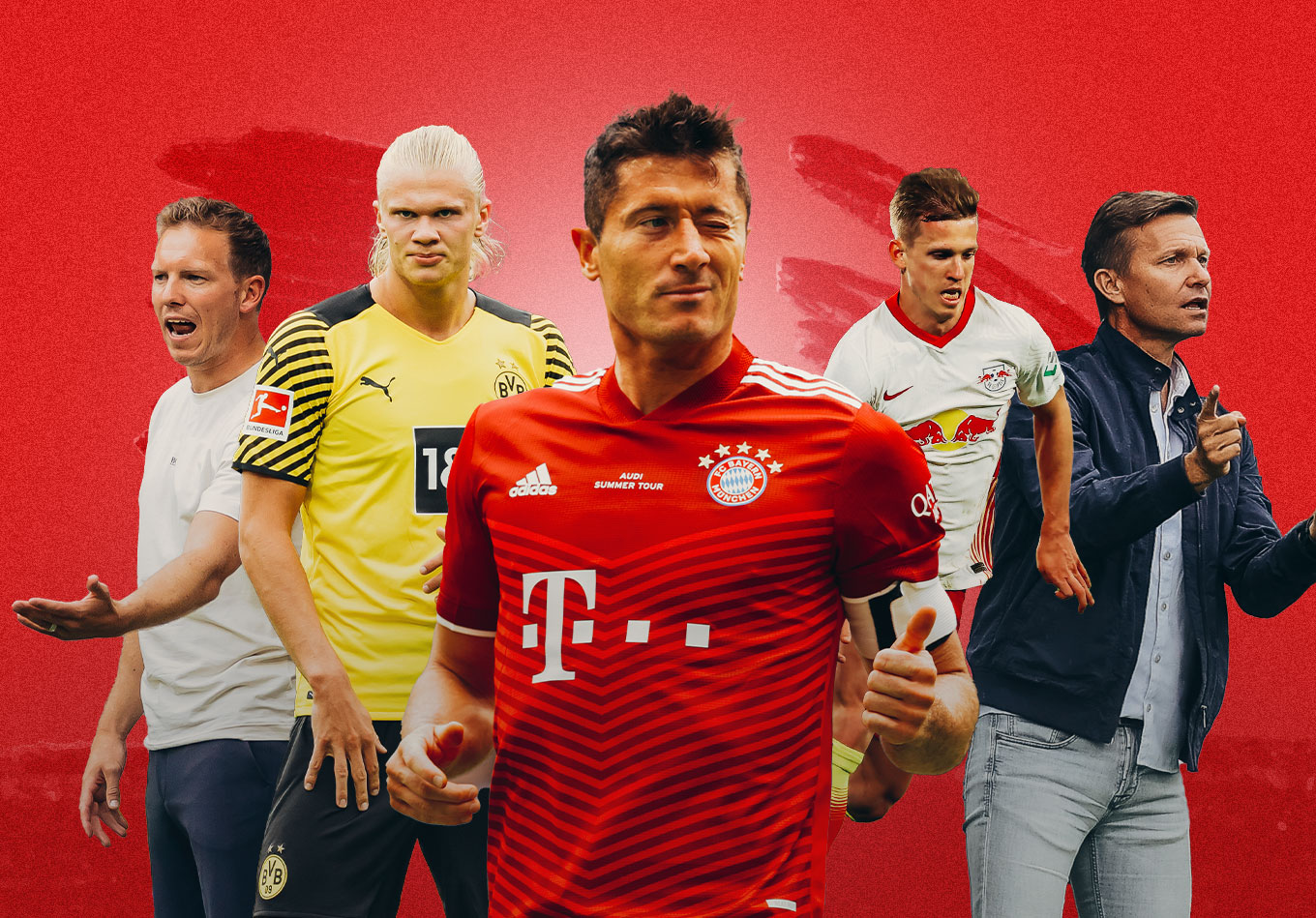 This Friday sees the 2021-22 Bundesliga kick off as Borussia Mönchengladbach host Bayern Munich. Bayern have won each of the last nine Bundesliga titles and are favoured by almost everyone and everything – including our AI Prediction Model – to make it 10. If they did so, the Bavarians would become the first side in the top five European leagues to win 10 consecutive domestic league titles. This is, however, easier said than done – just look at Juventus who failed to complete that feat last season. Bayern’s biggest rivals will be desperate to finally end their stranglehold on German football. But has anyone got a chance? Here’s our Bundesliga season preview.

Over the majority of the past decade, Bayern Munich have been in a class of their own in Germany. They’ve won nine consecutive Bundesliga titles and, when you look at the margin of victory in each season, it was not particularly close:

Bayern’s attack reached historic heights last season. Their total of 99 goals has only been bettered twice in Bundesliga history, each time by a previous Bayern side (1971-72 with 101 and 2019-20 with 100). Compared to their rivals, the Bavarian side were clinical in front of goal, scoring 99 goals from an expected goals total of 77.2, the biggest positive difference between goals and xG in the league  (Wolfsburg scored 61 goals from 49.9 xG, the second biggest overperformance).

At the centre of this league-leading attack was Robert Lewandowski, who broke Gerd Müller’s previously ‘unbreakable’ record of 40 goals in a single Bundesliga season. Unsurprisingly, Lewandowski led the Bundesliga in most attacking categories and was directly involved in 48 of Bayern’s 99 goals (a league-leading 48.5%).

But such dependency on one player has its drawbacks. Bayern do not have an adequate replacement should their star striker miss an extended period of time. Given his age, this is becoming more and more possible. Sure, there is a young star in the making in Jamal Musiala, but the youngster has yet to prove he can perform consistently over the course of a full season.

Another element to consider is new manager Julian Nagelsmann. Although it looks set to change this season, Nagelsmann is yet to win a trophy in professional football. His record with RB Leipzig against teams in the top five of the Bundesliga last season also does not inspire confidence (D5 L3). Yet, given that the German champions had their worst defensive season last campaign since 1995-96, shipping 44 goals, Bayern will first and foremost bank on the young manager bringing his defensive prowess over from RB Leipzig.

Let’s be honest, we’re clutching at straws so far to find reasons Bayern might not win again. None of this will matter if a worthy contender doesn’t emerge. So, what should we make of Bayern’s rivals?

Borussia Dortmund were the last team to win the Bundesliga before Bayern went on their run of nine consecutive championships, when they lifted the trophy in 2011-12. Since then, Dortmund have come the closest to breaking Bayern’s monopoly on the title, finishing two points behind the Bavarians in 2018-19.

If any side is to dethrone Bayern, it looks like it has to be Dortmund. For starters, they’re the only side anywhere near matching Bayern’s firepower. BVB scored 75 goals last season, the second highest behind Bayern’s 99, with 27 of those strikes coming from Erling Haaland. The Norwegian has been directly involved in 48 league goals (40 goals, eight assists) since he joined Dortmund in January 2020, scoring a goal every 87 minutes. Looking at all players to have scored at least 25 league goals, no other player in Bundesliga history has needed under 100 minutes per goal.

Whether Dortmund can maintain their attacking output will depend on how well they cope with Jadon Sancho’s departure. Since making his debut in October 2017, Sancho racked up more goals and assists than any other Dortmund player in the Bundesliga (83: 38G, 45A). Dortmund will look to replace Sancho’s goal threat with new and existing options alike.

The newly signed Dutch international Donyell Malen scored more non-penalty goals (19) and recorded more non-penalty xG (17.7) than any other player in the Eredivisie in 2020-21. Dortmund captain Marco Reus will hope to carry on his late-season form from 2020-21, when he scored five times in his last seven Bundesliga matches.

To keep the creativity flowing without Sancho, Dortmund will look to some well-known faces: left-back Raphael Guerreiro already led BVB in chances created from open play (51) in 2020-21 and recorded the third highest open-play expected assists tally in the league last season (8.3). Additionally, the Portuguese international played the most through balls of all players in the Bundesliga (eight) and registered 10 assists, a personal best.

He scored five goals to go with his 10 assists, and his 15 goal involvements were the most for any defender in the league last term.

Due to injuries, Thorgan Hazard only started in eight league games last season, scoring once and assisting three. In the two seasons before that, the Belgian assisted 23 goals in the Bundesliga – only Sancho and Thomas Müller had more over that period (30 each). Finally, Giovanni Reyna might step up in a similar fashion to how Sancho did after Ousmane Dembele’s departure in 2017-18. The 18-year-old American is already the youngest player to assist three goals in a single Bundesliga match, after doing so in October 2020 against Freiburg (17y 325d).

One of Dortmund’s biggest weaknesses in past years has been their poor record when facing Bayern, losing eight of their last nine Bundesliga matches against the Bavarian giants (W1). However, new BVB manager Marco Rose has beaten Bayern twice in four league matches with Gladbach – since 2019-20 no coach has beaten Bayern more often in the Bundesliga. If Dortmund are to usurp the kings, they will need to take more points from Bayern directly, just as in 2010-11 and 2011-12 when BVB won all four matches against the Bavarians and lifted the Meisterschale at the end of both seasons.

RB Leipzig are starting only their sixth Bundesliga season, but they’ve already established themselves as one of the top teams in Germany, having finished in the top three in four of their five seasons. Since Leipzig’s promotion to the Bundesliga (2016), only Bayern (18 defeats) have lost fewer games than Leipzig’s 35, this among all teams to have played at least three seasons in that period.

However, for the fourth time Leipzig will start the season with a new coach. This time it’s Jesse Marsch, who joins the club from Red Bull Salzburg. Marsch has already successfully applied the philosophy of Red Bull franchise football at the New York Red Bulls (Supporters Shield Winner) and most recently at Salzburg (two-time double winner in Austria). In Leipzig, the conditions are in place to continue that success:

With Marsch, Leipzig have a coach on the sidelines who loves to play attacking football. In 2019-20, Salzburg scored 110 goals in 32 games under him – the highest number in the history of the Austrian Bundesliga.

Marsch’s sides love to win the ball back as close to the opponent’s goal as possible. In last season’s Austrian Bundesliga, no team won possession in the opponent’s third as often as Salzburg (201 times).

Dani Olmo is one who will really suit this style of play. In Europe’s top five leagues last season, only Kike Garcia (52, Eibar) won possession more often in the attacking third than the Spaniard (41). After winning the ball back, the next directive is to engineer a shot inside the penalty area. Case in point: 72% of Salzburg’s shots (incl. blocks) were taken from inside the box last season – the highest percentage in the Austrian league. Olmo does not only win the ball in dangerous areas, but he also creates chances off the back of it. Only Bayern’s Joshua Kimmich (44 secondary chances created) played the second-to-last pass before a shot more often than Olmo (37) in last season’s Bundesliga.

After Leipzig had no player with more than eight goals last season, the Saxons have brought in reinforcements. Andre Silva, who came from Eintracht Frankfurt, was directly involved in 33 goals last season (28 goals, five assists). Only Lewandowski had more direct goal involvements (48) in the Bundesliga last season. Silva is especially dangerous in the penalty area, the target zone of Marsch’s attacking football. He scored all his 28 goals from inside the penalty area, and no other player in Europe’s top five leagues scored more goals from inside the box than the Portuguese striker.

So, Leipzig fans can look forward to some great attacking football in addition to their already strong rearguard. In last season’s Bundesliga, Leipzig allowed just 29.6 expected goals against, conceded only 32 goals and kept 15 clean sheets, ranking first in all these categories. In addition, Leipzig were the only team in Europe’s top five leagues last year that did not make a single individual error leading to a goal.

For the upcoming season, their defence will be further strengthened by Josko Gvardiol, who won 66% of his duels in last season’s Croatian top flight – no Leipzig outfield player won their battles at a higher rate last season. On the other hand, Leipzig lost two key players in their defence with Dayot Upamecano and Ibrahima Konaté leaving. Only time will tell if their absence can be compensated for and whether Leipzig can kick on again this year.

What Does Our Prediction Model Say?

As usual in the German top flight, Bayern will be the team to beat this season. Dortmund and Leipzig – their two main competitors – added some exceptional players in Malen and Silva and will try everything to end Bayern’s winning streak. But arguably they lost more than they gained with the departures of Sancho, Upamecano and Konaté.

Bayern remain Bayern – one of the best teams in the world with only one target: to win their 10th consecutive Bundesliga title. Our prediction model totally confirms their expectations:

The model estimates the probability of each match outcome – either a win, draw or loss – based on each team’s attacking and defensive quality. Those ratings are allocated based on four years’ worth of comprehensive historic data points and results, with more weighting given to recent matches to account for changes in form and personnel over time. You can read more on this below.

The model gives Bayern a 84.3% chance to win the crown. Dortmund have the highest chance among the chasing pack at 11.7%, followed by RB Leipzig with 2.9%. Wolfsburg, who managed their third-best Bundesliga points tally ever last year (61), have got a tiny 0.6% chance. It will truly be a miracle for Mark van Bommel’s team to lift the trophy again after already beating the odds in 2008-09.

The model estimates the probability of each match outcome (win, draw or loss) given each team’s attacking and defensive quality.

The team’s attacking and defensive qualities are based on four years of historic results, with more weighting given to their most recent results.

The model will take into account the quality of the opposition that a team scores or concedes against and reward them accordingly. For example, scoring against Manchester City is worth more than scoring vs. Newcastle.

We can simulate the upcoming matches using goal predictions from the Poisson distribution with the two teams’ attacking and defending qualities as inputs.

Finally, we simulate the outcome of the season 10,000 times in order to estimate the likelihood of each team finishing in each league position.