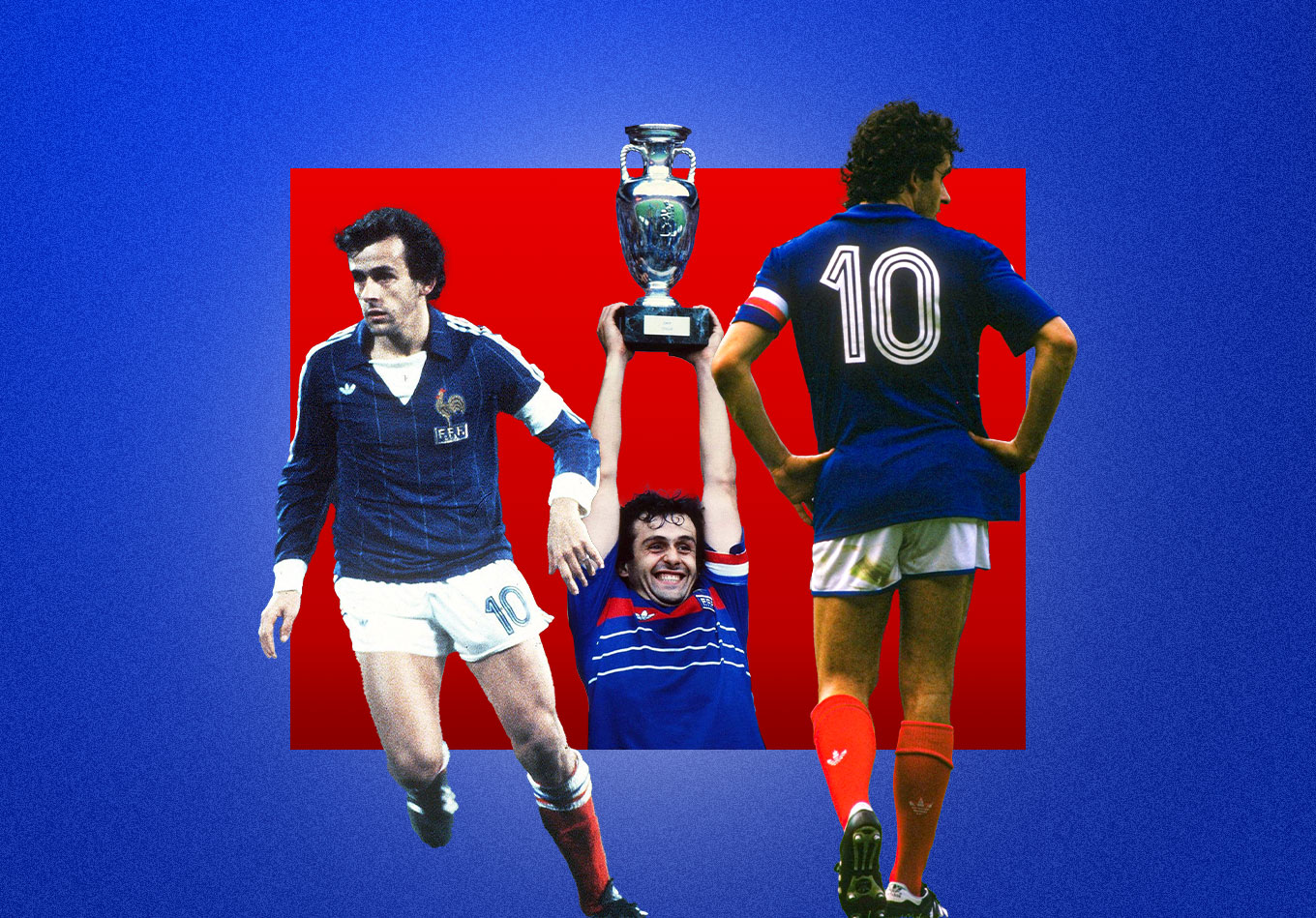 Here at The Analyst, we have the largest treasure trove of UEFA European Championships data. It means we can relive the greatest tournaments and performances of yesteryear. David Wall needed no excuse to revisit 1984, when Michel Platini had Europe at his feet.

Major tournaments on home soil are a double-edged sword. On one hand, the nation acts as a 12th player. On the other, the pressure can rapidly become unbearable.

Prior to Euro 1984, France had an inferiority complex towards its main neighbours. West Germany and Italy had won four major international tournaments each. Even England and Spain had one to their name.

They approached Euro 1984 with memories of the World Cup two years prior still fresh in their minds. Their epic semi-final against West Germany showed the world they belonged, and it offered the motivation for what they could achieve on their own patch.

Major Tournament Titles for European Nations – on the Eve of Euro 1984:

Their captain, Michel Platini, was in the form of his life.

On the club front, he had left Saint-Étienne in 1982 to reach new heights abroad with Juventus. In the space of two seasons, he’d finished Serie A top scorer twice, won the Ballon d’Or, Cup Winners Cup and guided the Turin side to a new league title.

On June 12, 1984, hours before the inaugural game against Denmark, the stars were aligned for the 28-year-old.

Platini’s nine goals in 1984 remains a record at a UEFA European Championship.

His beginnings in the tournament were anything but auspicious. Well-marked by a talented and disciplined Danish side in the opening match, Platini conceded more than twice as many fouls (seven) as he completed passes in the final third of the pitch (three). However, like any great leader and No. 10 of repute, he popped up when it mattered most, opening the scoring midway through the second half with one of his scruffiest finishes but also one of his most important.

Offered more space in his two other group games (averaging 94 touches against Belgium and Yugoslavia – as opposed to only 37 against Denmark), Platini scored two consecutive hat tricks. A rarity, it has only ever been achieved by two other European players at a major international tournament: Hungary’s Sándor Kocsis at the 1954 World Cup and West Germany’s Gerd Müller in 1970.

His back-to-back trebles were also noteworthy in that they were both ‘perfect,’ as is the nomenclature in football parlance when a player scores one goal with his right foot, one with his left and one with his head. In fact, his two headers were so clinically dispatched (including the stylish diving header below against Yugoslavia aided by some not so stylish marking) that one would have expected him to score more cranium-related goals in his international career. However, only three of his 41 goals for France came via the aerial route.

Euro 1984 was also a microcosm for his trademark: free-kicks. That’s the way he scored the opening goal in the final against Spain, helped by the now legendary mishandling of goalkeeper Luis Arconada.

Platini once remarked that free-kicks had become like penalties, such was the expectation that he would score from those situations. His efficiency was down to the ability to vary his style: from delicate, dipping attempts to powerfully driven shots, his repertoire kept goalkeepers guessing, and more often than not picking the ball out of their nets. In fact, over a quarter of his 41 international goals came from free-kicks, scored either directly from a dead ball (seven) or following a short, tapped pass (four), back when it was fashionable for a teammate to roll the ball a couple of meters to open up the shooting angle.

It might be cliché to say that a player’s exploits are the reflection of the quality around him. But that is especially true in the case of Platini and that 1984 French side.

Platini was the spearhead of a fluid midfield, a quartet the French press called ‘carré magique’, or magic square.

All three were on a high, having ended the 1983-84 season as league champions with their respective clubs, Platini with Juventus, Giresse and Tigana with Bordeaux.

The fourth member was a relative newcomer and youngest member of the quartet, Luis Fernández. He was nonetheless essential in a more defensive, deeper lying role.

That balance offered a subtle alchemy to the team’s setup. An ode to a game meant to be played beautifully, as Platini highlighted when head coach Michel Hidalgo passed away in early 2020: “Hidalgo was a creator of emotions. His strength was to trust the group and allow us to express our qualities and individual talents.”

Platini, Giresse, Tigana and Fernandez played every single minute at Euro 1984 and as the open-play sequence involvements show, France’s midfield was omnipresent with the ball.

Platini only rarely visited the flanks (see touch map below), which he left to Giresse and Tigana. When on the receiving end of rugged defending, he would lose his marker to drop deep, start a timely ball carry or a long diagonal pass to inject verticality.

However, it was on the end of moves where Platini was at his most devastating. If a 9 ½ shirt number existed, it would be Platini’s.

The philosophy of that French midfield is encapsulated in France’s opening goal at Euro 1984, with Platini benefiting from Tigana’s interception and Giresse’s drive upfield:

Tigana – who would finish second in the 1984 Ballon d’Or – was the tournament’s joint-top assist provider (three). He also created the most chances from open play (14) and embarked on the most progressive carries (92), the latter being the most telling statistic in highlighting Tigana’s ability to drift past the opposition and offer penetration to a team dripping with flair.

Fernandez the disruptor; Giresse and Tigana the instigators; Platini the finisher. It’s perhaps an overly simplistic summary as all players took turns to fill some of these roles.

For instance, Platini committed 16 fouls in five games. That’s nearly twice as many as any other French player. Whether it was stopping opposition counter-attacks or a sign of frustration, the two games where he conceded the most fouls were the ones that remained undecided for the longest: Denmark in the opening game and Portugal in the semi-finals. The most graceful players can also put the foot in when it matters.

Platini could also dig deep and show his leadership qualities when it mattered. No game epitomises his will to win quite like the semi-final against Portugal. 2-1 down and six minutes to go in extra-time, captain Platini was in no mood to see France’s campaign come to a crashing halt at the penultimate stage. He set up defender Jean-Francois Domergue for the equaliser, a move dripping with determination rather than pure skill – his solitary assist of the tournament.

The winning goal in the 119th minute was pure No. 9 flair: benefitting again from Tigana’s forward carry, Platini reads the run perfectly and anticipates the cut-back faster than the Portuguese defenders. One touch to put himself in position and the finish. France were on their way, demons of 1982 exorcised.

Amazingly, despite appearing in only one UEFA European Championship, Platini still jointly holds the record for most goals in the history of the tournament. Maybe not that much longer if Cristiano Ronaldo or Antoine Griezmann have anything to say about it at this summer’s tournament.

Euro 1984 consolidated Michel Platini as one of Europe’s greatest players. During the tournament, he overtook Just Fontaine as France’s all-time top scorer, a feat that would be unsurpassed until Thierry Henry broke the record in 2007.

The 1986 World Cup would be his swansong although an injury prevented him from replicating the exploits of two years prior. He left that to Diego Maradona.

Alongside the Argentine No. 10, Pelé and Johan Cruyff, Platini truly was the player of his generation.