For 80 Years, Scotland Were Better Than England | The Analyst 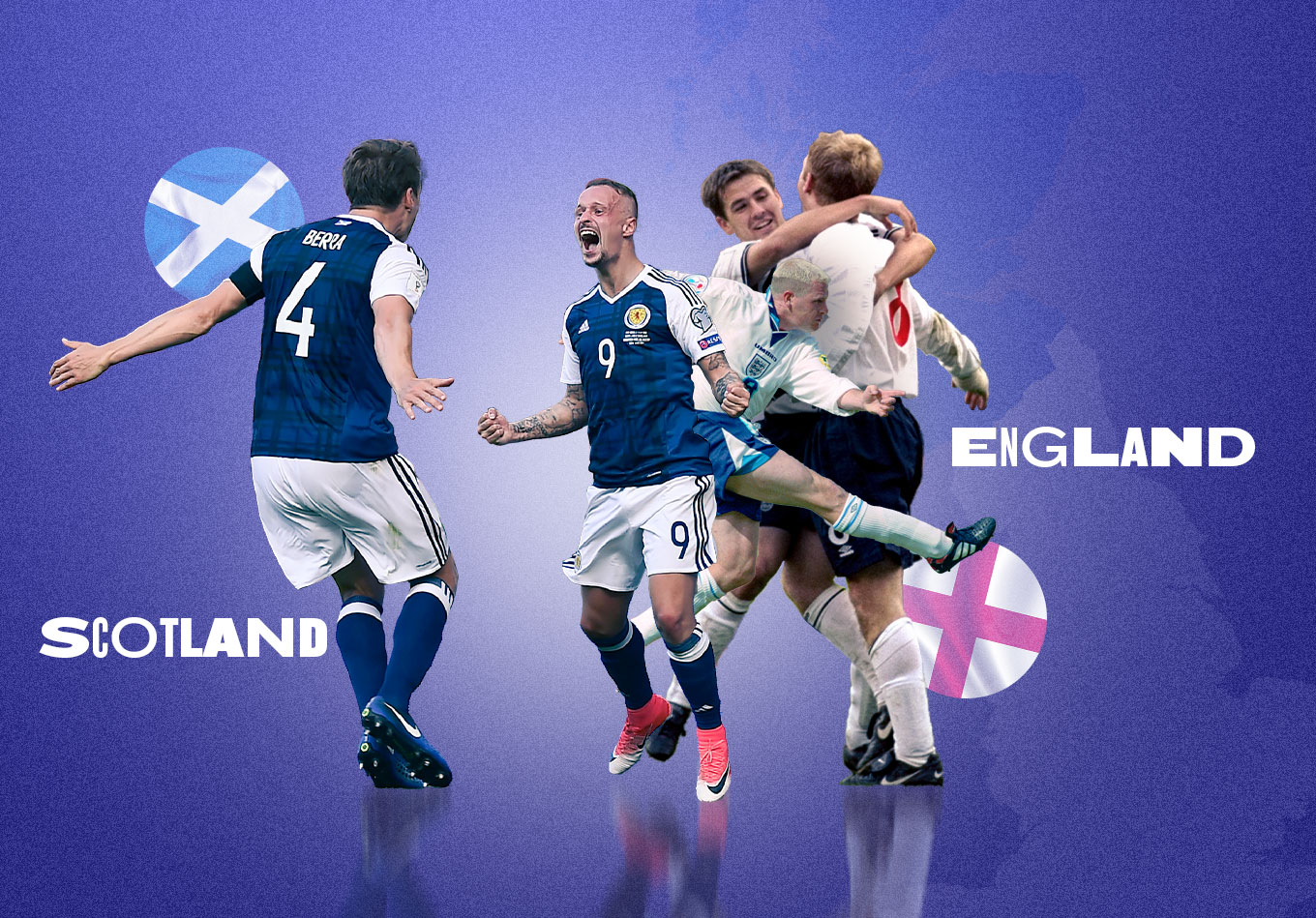 Bring up “The Battle of Neville’s Cross” and some people will think of the military encounter between Scotland and England in October 1346, which ended with Scotland’s King, David II, being captured and brought to London for ransom, like a medieval Charlie Nicholas. Others will think of Gary Neville’s cross to Alan Shearer against the Scots at Euro 96, expertly headed home by the Blackburn striker for the first goal in England’s nervy 2-0 win.

Whatever your preference, this is a clash weighed down with history, almost too much of it. Whether they knew it or not, the England and Scotland players lining up in front of 2,000 fans at a cricket ground in Partick for the first-ever official international football game in November 1872 were starting something that has reached its latest incarnation in Euro 2020, in the year 2021. Rivalries in football can spring up at any point, but this is the original, and this is its story.

Scotland dominated the early encounters between the nations, winning nine of the first 13 games. The very first match, at Hamilton Crescent, ended 0-0, which was a rare scoreline in the year after goalkeepers were legislated as a specific position. For two nations who have often prioritised functionality over the years, it’s pleasing to know that there have been only three goalless draws between them, that opening game, plus one in 1970 when England were still reigning World Champions and another in 1987 when England were very much not reigning World Champions.

But 1987 and the Rous Cup was just an HG Wells-style futuristic dream in the 19th century. Contemporary Scotsmen could instead enjoy the fantasy football that their players, early advocates of the very un-English technique of “passing”, were displaying against the southern nation. Scotland scored seven goals against England in March 1878, still the most they have managed in a game against them, and four of the five occasions the Scots have scored five or more against the English came in a year starting with ‘18’.

One of the most eagerly contested games came in 1879 at the Kennington Oval. England won 5-4 but there were four goals ruled out for offside, proving that this sort of aesthetic outrage happened in the pre-VAR era and even the pre-video era. That 5-4 was to be England’s only win for nine years, the next coming in 1888, shortly before the formation of the Football League. England’s 5-0 win at Hampden Park contained players from clubs such as West Brom, Nottingham Forest, Aston Villa, Preston and Wolves. League football was coming and nothing would ever be the same again. Although for fans of extremely 19th-century football, it should be pointed out that England’s goalkeeper in this game was a Billy Moon, who played his club football for Old Westminsters FC.

The 20th century started cautiously, with only 21 goals in 11 games between 1903 and 1913. For Scotland, the highlight of the era in which the World Cup was first mooted, yet snootily rejected by the Home Nations, was the famous 5-1 win at Wembley in 1928. The “Wembley Wizards” scored four second-half goals to hand out England’s biggest home defeat since 1881 and their biggest at Wembley until Hungary came calling in the 1950s.

By now, both England and Scotland were regularly facing glamour sides from the continental mainland but the Home Championship ensured that the old rivals would meet every season. England won the final meeting between the two before the Second World War interrupted everything, but it ended a run of only four wins in the previous 18. Turns out having Dixie Dean in his pomp doesn’t guarantee regular wins against the auld (old) enemy.

One of the notable England defeats in the 1930s came at Hampden in April 1937, significant because it set a new world attendance record of 149,407. Surpassed by Brazil’s Maracana, most notably in the 1950 World Cup, it remains the biggest crowd to watch an international football game in Europe, and one that absolutely won’t be beaten in the Covid-restricted era. Stanley Matthews made his fourth appearance for England in that game; his final appearance for his country would come more than 20 years later.

Football was understandably popular as normal life returned post-1945, and the Home Nations even deigned to take part in the World Cup competition they once thought beneath them. The regularly organised seasonal tournament between the nations of the British Isles thus occasionally became World Cup qualifiers and, mysteriously, England’s form improved considerably.

Scotland won only two of 15 games against England in the 1940s and 1950s. A run of three Scottish wins in a row in 1962, 1963 and 1964 might look like good times, but it’s sandwiched between two dark events for Scottish football: England’s World Cup win in 1966 and in April 1961, a 9-3 defeat at Wembley, featuring an early cabaret performance from Saint (no goals) and Greavsie (three goals). Scottish keeper Frank Haffey never appeared for his country again, and it formed the origin story for Jimmy Greaves’ Scottish goalkeeper content in the 1980s.

There was Scottish solace in a 3-2 win against England in 1967, making them unofficial world champions, while a pair of wins in 1976 and 1977 was most memorable for the Scotland fans invading the Wembley pitch in the second game, breaking the crossbar and snapping the grip of the Home Championship on British international football. A sort of footballing Four Nations, the 1983-84 edition was the final edition, and, perhaps aptly, a gloomy 1-1 draw, albeit one that saw Gary Lineker’s international debut, handed the final title to Northern Ireland.

That wasn’t the end of regular meetings between Scotland and England, though. The late 80s saw a new, short-lived end-of-season competition, the Rous Cup, created firstly as a single game between the sides, before the likes of Brazil and Chile were invited in. The Scotland v England game in 1989 ended 2-0 to the detested visitors and was the official end of regularly scheduled contests, the final goal being scored by Steve Bull on his international debut, a man who had been playing league football in the third tier that season. As the game became an increasingly global affair, the parochial scrap between north Britain and south Britain had lost its lustre.

Both England and Scotland were at the World Cup in 1990 but while it was another group stage exit for the Scots, England came closer to the final than at any point since 1966. The oldest rivalry in international football was drifting into folk memory by the time the draw for the Euro 96 groups were made in December 1995. Much has been written about the events of 1996, so much in fact that the six subsequent games are barely an afterthought. OK, England’s two friendlies against Scotland under Roy Hodgson don’t register highly on the Battle of Britain Richter scale, but the playoff games to reach Euro 2000 were cult classics, Paul Scholes’ smart brace at Hampden Park almost cancelled out in the second leg as Scotland won 1-0 at Wembley.

Further meetings in qualifying for the 2018 World Cup were relatively low key, with Harry Kane’s last-minute equaliser at Hampden Park in June 2017 the most recent goal scored in an England-Scotland match. He has every chance of being the next scorer in this fixture too.

Billy Connolly once said that “there are two seasons in Scotland. June and winter.” If Steve Clarke’s team pull off the win they absolutely need on Friday night, then the 2021 Scottish summer will last from this first big weekend until December and possibly beyond. If you like your football served up with abundant history and occasional good play, I’m happy to confirm that England against Scotland is the one for you.