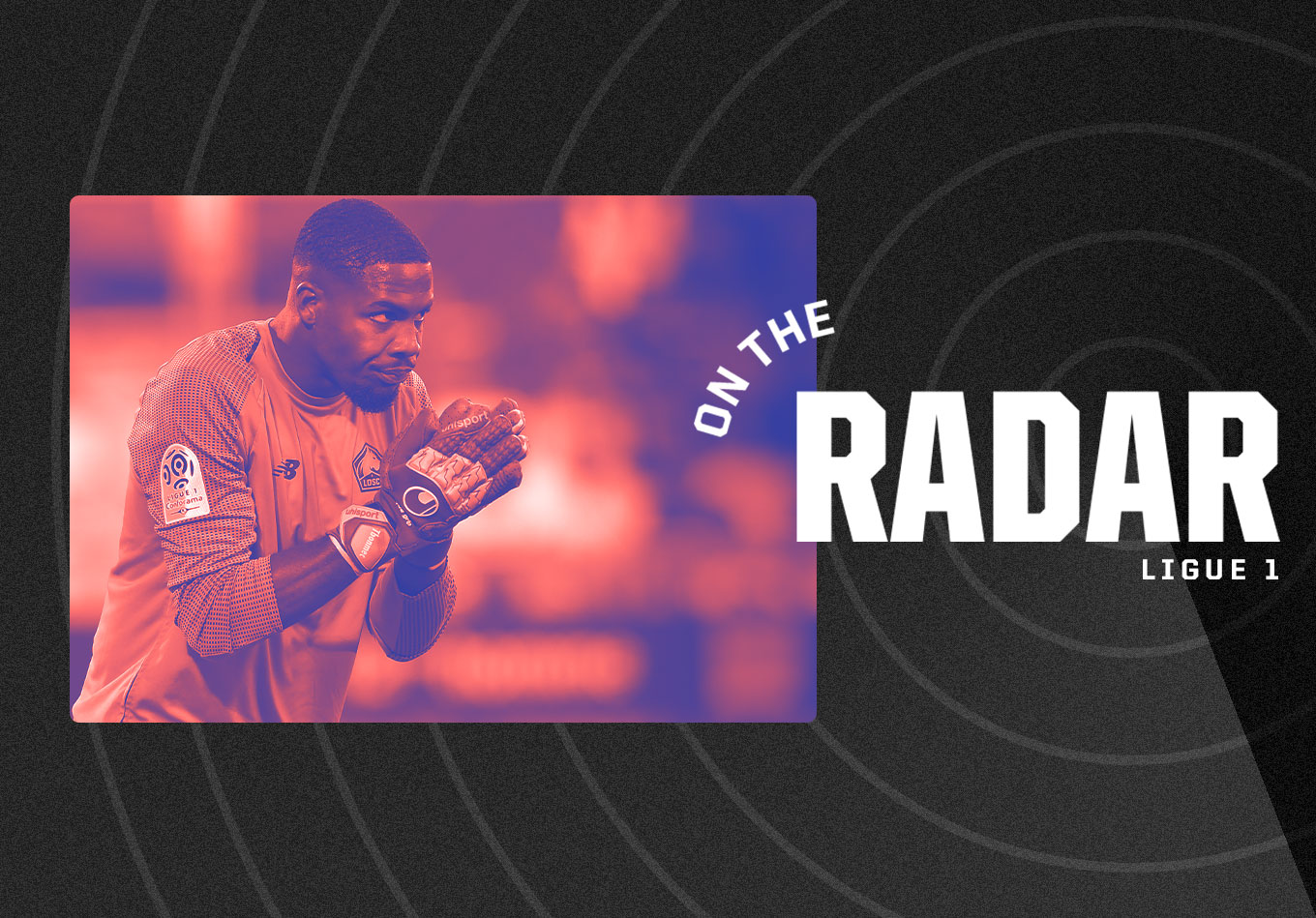 With the 2020-21 season coming to a close, the international transfer window will once again open, and many clubs will be looking to invest in young talent from other leagues. In our transfer target series, we identify players who could well be on the radar of top European clubs this summer. Jean-Baptiste Caillet selects five players who’ve impressed in Ligue 1 this season.

Two years after his professional debut, Eduardo Camavinga has already done enough to be on the shopping list of any big club around Europe. At 18 years old, the central midfielder has already played 80 competitive games at Rennes, including four games in the 2020-21 Champions League. As it stands, he has 65 Ligue 1 appearances and is the second-youngest player to reach that tally in the history of the competition after Basile Boli.

When looking at the most precocious French players, Kylian Mbappé is often the name on the lips of many, but Camavinga shouldn’t be an afterthought. Even before his 18th birthday, he’d already been selected by Didier Deschamps to the full French squad, becoming the first under-18 player in the post-war era. On making his first start for Les Bleus against Ukraine in October 2020, he became the second-youngest scorer in their history at 17 years, 332 days old, only behind Maurice Gastiger who was six months younger when scoring against Luxembourg in February 1914.

Camavinga’s story isn’t only about his potential. The young midfielder has already shown what he can bring to a team. Since the start of 2019-20, he’s made the most tackles (195) and has completed 57% of duels in Ligue 1 – only two of the other 24 midfielders to have competed in 500+ duels in this period have a success rate as strong.

After such a campaign and such a glorious debut with Les Bleus, Camavinga was criticised for underperforming in certain matches. Despite this, he remains one of the leading box-to-box players in the French top flight. No player in a similar position to him this season has carried the ball farther up field than he has (3,040 metres), which coupled with his high tackling rate provides a very useful service to a Rennes side chasing a top five finish in 2020-21.

His contract ends in 2022, and Rennes are aware that they can’t hold their most promising talent for much longer. It seems they must sell this summer to cash in on the talented youngster before he can leave for free, therefore providing a golden opportunity for a bigger European club to come in for him.

Despite being close to the Ligue 1 title, Lille will have a tough battle to have Mike Maignan protecting their goal in 2021-22, after six years and almost 150 top-flight games at the club.

It seems clear that he’ll be one of the French goalkeepers in the squad at Euro 2020, and a debut appearance in a major international tournament would not be an undeserved achievement.

Across the top five European leagues this season, he has kept more clean sheets than any other goalkeeper (20). This, coupled with his career-high save percentage in 2020-21 (78.9%) have led to Lille having the best defensive record in Ligue 1 (22 goals conceded) on the way to a potential league title.

He’s been a reliable keeper, playing every minute of Lille’s last 106 Ligue 1 games in the top flight while conceding only three errors leading to goal. ‘Magic Mike’ also has a very good record at saving penalties, with eight of the 26 faced in the French top-flight saved (31%). That’s the third-highest tally in Ligue 1 since his debut in September 2015 when his very first touch in the competition was a penalty save against Paul Georges Ntep.

Goalkeeper of the Year at the last Trophées UNFP in 2019, he is toe-to-toe with Keylor Navas to claim another award this season. Both are way above the rest of the Ligue 1 goalkeepers in 2020-21 in terms of goals prevented.

Goals prevented measured as a rate metric can account for different goalkeepers facing a different number of shots over a period of time and is a more accurate way to judge a goalkeeper’s shot-stopping ability. Normalising for the volume of shots allows us to see if goalkeepers were expected to concede more or fewer goals for every goal conceded, based on the quality of shots that they face on target.

Miagnan’s goals prevented rate is 1.36, meaning that he would have been expected to concede 1.36 goals for every goal he’s actually conceded in 2020-21 – only lower than only Jan Oblak (1.52) across the top five European leagues this season among first-choice goalkeepers. When placed among the elite group of goalkeepers in Europe, it’s no wonder his name has been linked to some of the biggest clubs.

Lyon fans were upset when they learned that Amine Gouiri was leaving the club for a meagre €7 million last July. The young forward, born only 40 kilometers from Lyon, failed to find his place under Rudi Garcia with just 110 minutes of competitive playing time in 2019-20. As Loïc Rémy or Alassane Pléa did in years past, he chose to join Nice to get all-important playing time.

It’s been a fairly unspectacular season for Nice overall, with them sitting in ninth place in Ligue 1 with two games remaining and a poor UEFA Europa League campaign where they finished bottom of the group behind Bayer Leverkusen, Slavia Prague and Beer Sheva. The same couldn’t be said for Gouiri himself. With 16 goals and seven assists, his 23 goals involvements are more than double any teammate at Nice.

Beyond his goals and his assists, Gouiri is a very busy forward. In Ligue 1 this season, he ranks eighth in shots (76), sixth in touches in the opposition box (170) and first for possessions won in the final third (33) across all players. It’s true that he’s underperformed his expected goals total of 14.4 with 12 goals, but margins are fine, with Gouiri hitting the woodwork more often than any other player (six).

Away from Lyon where he suffered from the premature comparisons with Karim Benzema, Gouiri has now shown that he did indeed have potential. It wouldn’t be a surprise to see clubs queuing up for his services in the summer.

With Monaco falling apart and fighting to avoid relegation in 2018-19, Benoît Badiashile was one of the very few silver linings.

With his Ligue 1 debut against PSG and his Champions League debut against Atlético Madrid at the end of 2018, the centre back had to quickly adapt himself to play against the best. He seems to have passed that test, with 68 appearances and more minutes (5,777) than any other player aged 21 or under across the top five European leagues this season.

Despite interest from Manchester United last summer, he eventually stayed in the principality, where he has continued his progress under Niko Kovač. The Croat has helped Monaco surge back to the top end of Ligue 1 while fighting for a Champions League spot, with Badiashile a big part of that.

He is the most used defender in Ligue 1 this campaign with 33 appearances and 2,691 minutes played, while he also scored two important goals to kick off their campaign, with an equaliser versus Reims in the first matches of the season and the winner in their meeting at Metz.

With Monaco holding the third-highest average possession figure in Ligue 1 this season (56.2%), it’s important that they have players who are comfortable on the ball. Badiashile has completed the most passes (2,002) and made the most touches (2,596) for Kovač’s side. In a game versus Reims in August, the defender broke the player records for Monaco in both categories, with 151 touches and 133 successful passes.

An accomplished defender despite his age, Badiashile has the second-best aerial duel win ratio of players in Ligue 1 (72.5%) and has the highest duel win ratio of any Monaco player (62.3%). He does this while maintaining discipline with a great record of receiving just four cautions in his last 52 top-flight appearances.

Three years after a difficult and unexpected debut in the Champions League, Badiashile will surely have another chance to appear in the competition, whether it be with Monaco or not.

Reports suggested a transfer to Juventus or Arsenal last summer were on the horizon, but they never came to fruition for Houssem Aouar. A fifth consecutive season with Lyon has produced slightly disappointing top-level numbers, with six goals and half that number of assists (three), but there is little doubt at the talent Aouar possesses.

Spells out with injuries and Covid-19 have hampered him this season, but he’s had flashes of genius to help Lyon in their title challenge. His association in the midfield with Brazilians Lucas Paquetá and Thiago Mendes or Bruno Guimarães works well to give him the space he needs to progress with the ball on the left side and support the three frontmen.

Only Neymar (8.0) has been involved in more shot-ending sequences per 90 minutes in Ligue 1 this season than Aouar (7.5), while he is also the central midfielder with the most shot-ending carries (17), which is at least twice that of any player in his position.

At 22, Aouar already has decent experience in both Ligue 1 (124 appearances) and European competitions (25). Since his top-flight debut, he’s been involved in 41 goals (22 goals, 19 assists) with only Kylian Mbappé (141) having more among players born since the start of 1998.

Lyon are always cited among the best football academies in France. In recent years, they have sold players at high price such as Karim Benzema, Alexandre Lacazette, Corentin Tolisso or Samuel Umtiti. There is a high chance that Aouar could join the list in the coming months.

Enjoy this? Subscribe to our newsletter to receive five stories each Friday. It’s free!