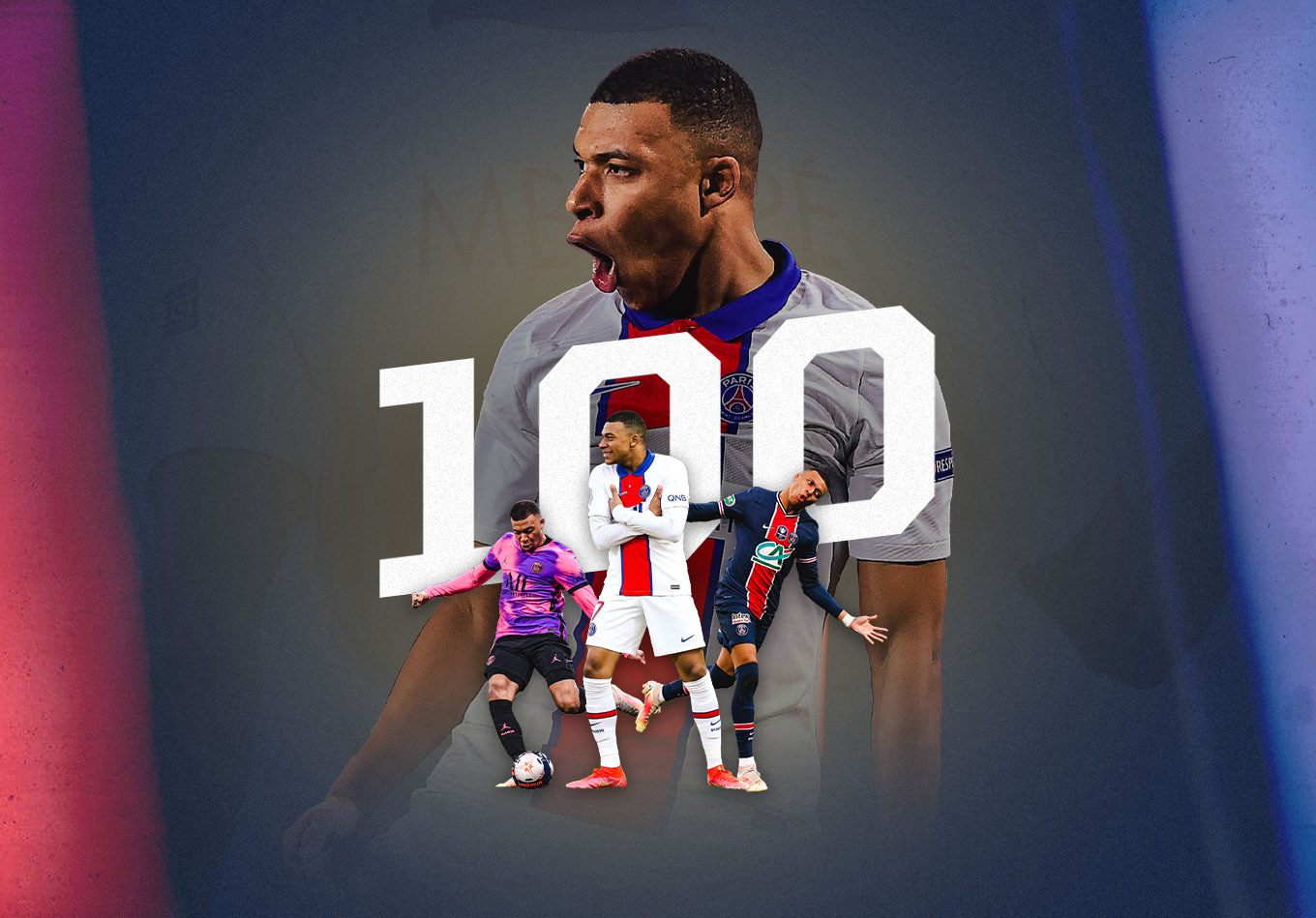 With a brace last Sunday against Lyon, Kylian Mbappé became the 89th and youngest player to score 100 goals in Ligue 1. But who else has he joined in the exclusive 100 Club? Here, we run through some of our favourite journeys towards those three magical figures.

Since his professional debut in December 2015, Kylian Mbappé’s goalscoring record is phenomenal. In Ligue 1, he’s scored 100 goals in 142 games. In the Champions League, it’s 25 goals in 42 games. For France – where he is still ludicrously eligible for the ongoing 2021 UEFA European U-21 Championship – he’s got 16 goals in 40 games.

The French striker has been no stranger to records in his young career, and now he has another one to his name. His brace against Lyon last Sunday saw Mbappé become the youngest player in history to score 100 goals in the French top flight (16 with Monaco, 84 with Paris Saint-Germain). At 22 years and 91 days old, he shattered the previous record held by Hervé Revelli (with Saint-Étienne in October 1969) by over a year. Mbappé is also the youngest player to achieve this feat across the top five European leagues in the 21st century, beating Lionel Messi’s age when he scored 100 La Liga goals by over a year (23 years and 150 days).

At the other end of the spectrum is Henri ‘Heinrich’ Hiltl. The winger, who played for both Austria and France at the international level, was described by his peers as “a great artist of football.” We’ll have to take their word for it. This artist had to wait for over 12 years to finally score his 100th goal in the French top flight, partly due to the break in football caused by World War II. The exact day that Hiltl reached his century has been lost in time, but the winger was at least 35 years and 10 months old when it happened, which makes him older than anyone on record. His 100th goal was his first in the 1946-47 campaign with CO Roubaix-Tourcoing. In the same season, he’d go on to win his only Ligue 1 title.

Roger Courtois was one of the most prominent players to feature in the early days of French top-flight football. He joined Sochaux in 1933 to compete in what was just the second edition of Ligue 1. The striker quickly established himself as one of the best forwards of the pre-WWII era, scooping up two league titles (in 1935 and 1938) and two golden boot trophies (1936 and 1939).

Courtois – courteous by name but not by nature – spared no time in becoming the first player to notch 100 Ligue 1 goals, achieving the milestone in the penultimate game of the 1936-37 season with a brace against Mulhouse. That match was only his 97th appearance in the French top flight, meaning he still holds the record for the fewest games needed to hit treble figures.

Despite the imposition of the Second World War, Courtois managed to score 210 goals in the French top flight, finding the net for the last time in 1956, just a few days after his 44th birthday. It won’t surprise you to learn that he’s also the oldest player to score a Ligue 1 goal.

After 14 years with Lyon, Alexandre Lacazette announced his departure from the club at the end of the 2016-17 season in an interview with L’Equipe published on May 19, 2017. His final game with OL came the day after in a pulsating 3-3 draw against Nice. Lacazette scored twice to bring up his century of Ligue 1 goals and ensured the home fans left with a parting gift. Assuming Kylian Mbappé plays another Ligue 1 game – nothing is certain in life, but The Analyst understands this should happen – Lacazette will remain the only player to join the 100 Club in his very last appearance in the French top flight.

Josip Skoblar is most remembered for the 44 goals he scored during the Ligue 1 season in 1970-71, the highest single tally in a French top-flight campaign. But the Yugoslavian striker has a far greater legacy than just one season. The Marseille legend remains the only Ligue 1 player to win the European Golden Boot award, and he was also the first player to finish as the top scorer in France for three consecutive seasons. Skoblar was a complete striker, as strong in the air as he was on the ground, but one of his greatest feats was scoring his 100th goal in the same game as his 100th appearance, doing so against Lyon in May 1972. Skoblar remains the second-quickest player to a century of Ligue 1 goals, behind Courtois, and the only one to combine two milestones on the same day.

Bastia, Lille, Metz, Strasbourg, Tours, Le Havre, Saint-Étienne and Matra Racing. Of the 89 players to reach 100 goals in Ligue 1, Abdelkrim ‘Krimau’ Merry did it while scoring for the highest number of teams (eight). From Corsica to Flanders, the Moroccan striker found the net for every side he played for until his 100th strike against Bordeaux in October 1988. Little did he know that this goal would be the swansong to a top-flight career (337 appearances, 102 goals) that ended a few weeks later after he was unceremoniously demoted to the bench. It seems not even centurions are immune to downturns in form. Still, no Ligue 1 player has scored for more teams than Merry Krimau since.

The Bonus Round: The Perfect Setup to Score Your 100th Ligue 1 Goal

Kylian Mbappé is the 89th player to reach 100 goals. Who knows who number 90 will be – it may even be you. To have the best chance at reaching the famous milestone, here are a few scenarios you might want to engineer:

The Most Frequent Fixture to Score A 100th Goal:

The Nationality (If You’re Not French):

So, it seems like if you’re an Argentinean Bernard playing either for or against Lyon, you’ve got a pretty good chance of scoring your 100th Ligue 1 goal. All you need to do first is score 99 others.