Will the Bills' Inability to Put Teams Away Finally Catch up With Them? | The Analyst 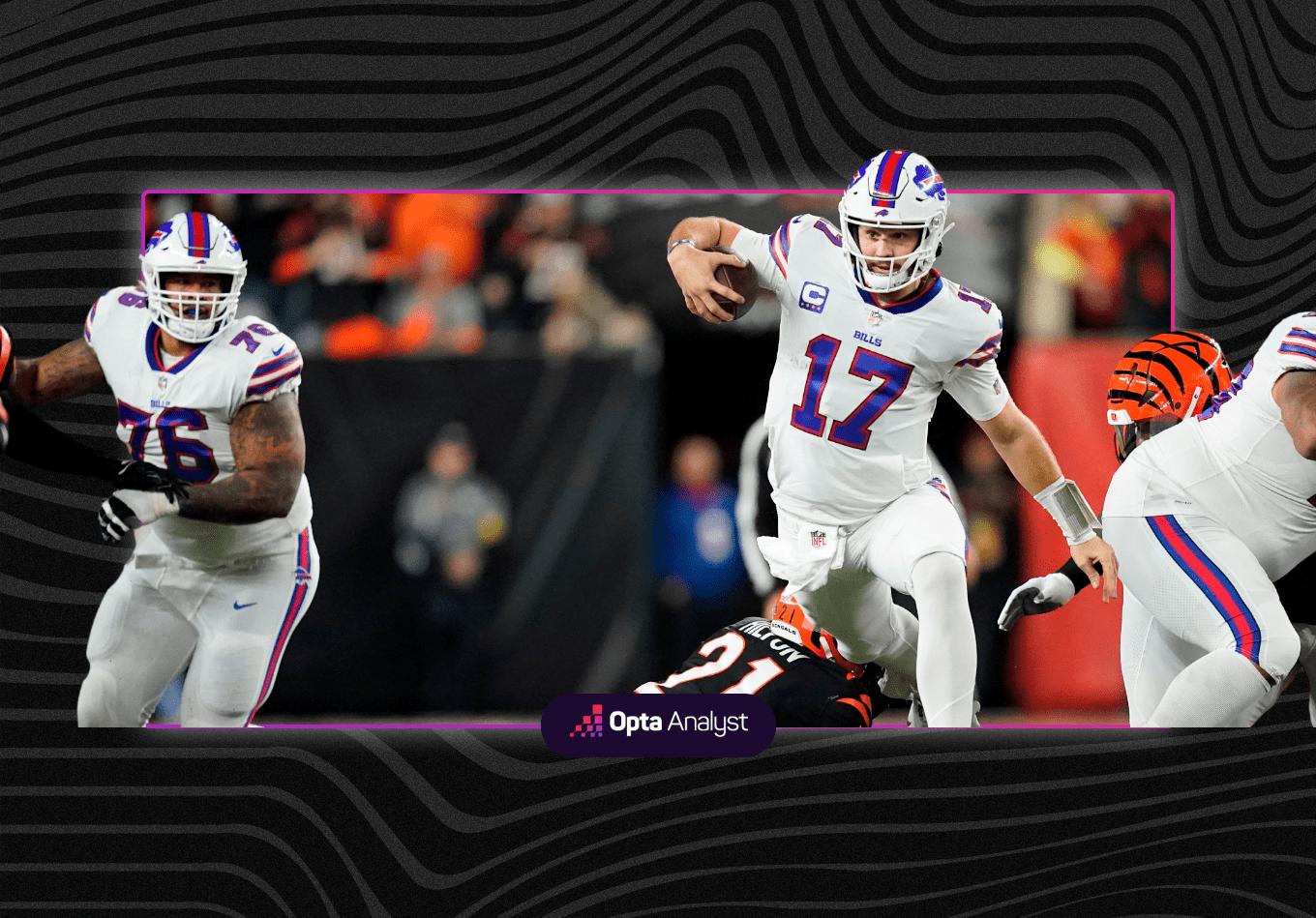 Will the Bills’ Inability to Put Teams Away Finally Catch up With Them?

The Buffalo Bills are in the midst of an eight-game winning streak, so it sounds a little strange to call them vulnerable heading into a divisional-round matchup against the Cincinnati Bengals.

But for anyone who closely watched the second-seeded Bills beat the New England Patriots in Week 18 and squeak by the seventh-seeded Miami Dolphins in the wild-card round, it’s more than fair to question Buffalo’s dominance.

As fate would have it, the playoff showdown with the Bengals is somewhat of a rematch between the two teams. Cincinnati was leading Buffalo 7-3 in the first quarter of Week 17 when the game was suspended and subsequently canceled after Bills safety Damar Hamlin suffered a cardiac arrest on the field in a frightening situation. Hamlin will miss the rest of the season, but he’s out of the hospital and has been back at the facility just over two weeks after the medical emergency.

If that game had finished, then the Bills and Bengals would not be playing this week under these circumstances. With a Bills win in Week 17, Buffalo would have been the No. 1 seed in the AFC playoffs and received a first-round bye. The NFL attempted to remedy that situation by holding a potential Bills-Chiefs AFC championship game (if both teams advance this weekend) on a neutral site in Atlanta. If the Bengals had won, however, Cincinnati would have wound up with the No. 2 seed, and this Sunday’s game would have been held in Cincinnati instead. The NFL elected against a neutral site for the Bengals-Bills game.

Bills quarterback Josh Allen will need to be at the top of his game to beat the Bengals on Sunday, and he can’t keep turning the ball over in key situations. Without two touchdowns off of kick returns, it’s entirely possible the Bills could have lost to the Patriots in Week 18 and lost the No. 2 seed in the AFC playoffs. Allen made some superhuman throws against New England, but he also tossed an interception in the red zone for a league-leading fifth time this season.

Allen ranked second in red-zone touchdowns with 24 – 10 scores behind Chiefs QB Patrick Mahomes – and added six rushing TDs from inside the 20 during the regular season. But he completed just 54.3% of his passes inside the 20-yard line and had two interceptions from inside the 10-yard line with 13 touchdown passes and a 50.0% completion percentage.

The Dolphins had no business keeping their wild-card round matchup close with rookie Skylar Thompson at quarterback, but Allen turned over the ball three times with two interceptions and a fumble that was scooped up for a Miami touchdown. He also made some tremendous throws, but mistakes keep popping up with the Pro Bowl passer.

Allen had the 11th-highest (or worst) pickable pass percentage with a 4.60 mark during the regular season. That was significantly up from 4.15% in 2021 and 3.68% in 2020. He’s split his interceptions pretty evenly based on depth of target. He’s thrown six picks on deep balls, five on intermediate throws and another five on short passes.

He’s been good under pressure with only five of his interceptions coming in those situations, but he leads the NFL in interceptions with 11 in a clean pocket and his 17 pickable passes without pressure are the third most in the NFL. He has five interceptions when blitzed and 11 when the opposing defense is sending four or fewer defenders.

One of the Bengals’ strengths is being able to generate pressure without blitzing. They ranked 12th in the league with a 39.7% pressure rate despite having the 14th-lowest blitz rate in the NFL at 29.1%.

Buffalo was able to keep winning despite the turnover problems because the Bills are one of the most complete teams in the NFL. Heading into the divisional round, they rank third in offensive EVE (Efficiency Versus Expected), sixth in defensive EVE, third in passing EVE, third in rushing EVE, sixth in EVE against the pass and fourth in EVE against the run. And they’re at their best on offense in obvious passing situations.

And Allen overall this season was one of the NFL’s best passers. He ranked first in passing EVE, which measures the average yards gained compared to the expected amount on anticipated passing situations, and second in average air yards. His well-thrown percentage was just 18th, however, and his catchable pass rate was 20th.

But he also didn’t really get enough help from surrounding playmakers. The Bills released wide receiver Cole Beasley before the season and didn’t re-sign Emmanuel Sanders, who went on to retire. They signed wide receivers Jamison Crowder and Tavon Austin and had big plans for returning wideouts Isaiah McKenzie and Gabe Davis. Crowder played just four games before being placed on injured reserve, Austin was released in October, and McKenzie and Davis haven’t quite lived up to the hype. The Bills had to re-sign Beasley last month to boost their wide receiver corps.

Allen threw six of his interceptions on targets to Davis, three on targets to tight end Dawson Knox and another two on throws to McKenzie. Stefon Diggs, meanwhile, ranks fourth in the NFL with 158 targets this season, and Allen was only picked off on one pass his way.

Davis had a strong playoff performance against the Dolphins, and the Bills will have to hope his playoff success continues into this week against the Bengals. But he was tied for having the fourth-most targets intercepted this season, and Allen completed just 52.9% of his targets to Davis.

The Bills also made a mistake in letting go of wide receiver Isaiah Hodgins, a 2020 sixth-round pick who started the season on the practice squad. He was signed to the active roster Oct. 8 and was waived Nov. 1. Former Bills offensive coordinator and now-New York Giants head coach Brian Dabolll claimed Hodgins off waivers, and he’s gone on to catch 41 passes on 48 targets for 456 yards with five touchdowns in nine games. He put together an eight-catch, 105-yard performance with a touchdown in New York’s wild-card round win over the Minnesota Vikings.

Cincinnati will also have to perform better on defense this week. The Baltimore Ravens, despite starting Anthony Brown and Tyler Huntley at QB, were able to keep things pretty close in back-to-back games against the Bengals.

Cincinnati is not as strong on paper as the Bills. The Bengals rank 17th in offensive EVE and 16th in defensive EVE heading into the division round. They also rank 12th in passing EVE, 28th in rushing EVE, 16th in EVE against the pass and 16th in EVE against the run. But they’ve also rounded into shape with their own nine-game winning streak that has seen some of their early-season issues running the ball and defending the run decrease.

Given how good the Bills have been this season, how complete they are, and how efficient Allen has been, it feels a little bit unfair to criticize them too much entering the divisional round. But during their eight-game winning streak, they’ve beaten just three teams with a top-16 overall EVE in the New England Patriots, Miami Dolphins and New York Jets.

It’s fair to wonder if they can keep winning games while Allen is turning the ball over at a high clip against the NFL’s elite.