Trending Up: The Four Hottest Teams in the NFL Ahead of the Playoffs | The Analyst 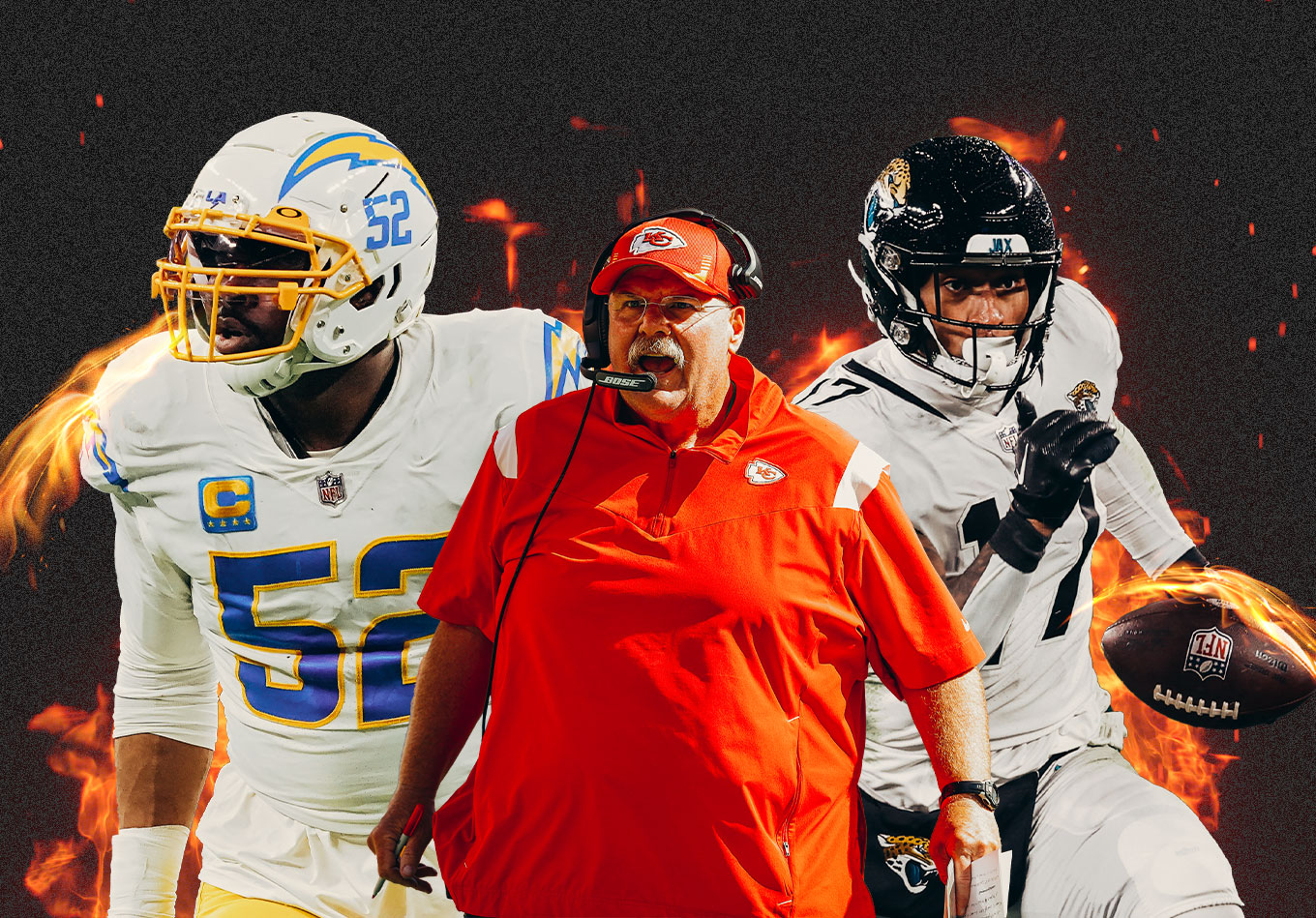 Trending Up: The Four Hottest Teams in the NFL Ahead of the Playoffs

Teams play with varying degrees of competition in Week 18 of the NFL season.

As a perfect case in point, Miami Dolphins and New York Jets fans are getting prepared to watch a football game quarterbacked by Skylar Thompson and Joe Flacco in the final week of the 2022 NFL season.

So, with the postseason on the horizon, let’s look at the teams that have been playing the best on both sides of the ball from Weeks 14 through 17 to determine who’s trending in the right direction before the playoffs. Four AFC teams rank in the top 10 in both offensive and defensive EVE over that span, and no NFC teams qualified.

The Cincinnati Bengals have won an AFC-best seven in a row, but they rank 21st in offensive EVE and 14th in defensive EVE over the last four weeks.

It took roughly 14 weeks, but the Chargers began to live up to their potential from Weeks 14-17 over a four-game win streak that saw them beat the Miami Dolphins, Tennessee Titans, Indianapolis Colts and Los Angeles Rams. Say what you will about the Chargers’ level of competition over that stretch, but the Dolphins had won five of their last six games entering their Week 14 matchup with the Chargers, the Titans still had Ryan Tannehill at quarterback and the Rams were coming off of a 51-14 victory over the Denver Broncos despite being ravaged by injuries.

The win over the Colts was what it was, though it’s still worth noting that the Chargers absolutely demolished Indianapolis and picked off quarterback Nick Foles three times in the game.

Perhaps the biggest factor on offense for the Chargers over the last four weeks has been the health and reintroduction of wide receivers Keenan Allen and Mike Williams in the offense. Despite having one of the NFL’s best and most promising young quarterbacks in Justin Herbert, the Chargers have kept things mostly conservative in the passing game and have a minus-0.179 passing EVE on the season. That mark has risen to plus-0.312 over the last four weeks of the season.

The Chargers’ defensive turnaround has had far less to do with returning personnel and rests more on the shoulder of head coach Brandon Staley’s scheme. Defensive superstars Joey Bosa and Derwin James have combined for just 49 snaps over the last four games, and high-profile free-agent additions JC Jackson and Austin Johnson are lost for the season on injured reserve.

Cornerbacks Asante Samuel and Michael Davis and outside linebackers Kyle Van Noy and Khalil Mack have helped lead the Chargers to No. 1 in defensive EVE against the pass over the last four weeks.

On paper, the Chargers looked like one of the NFL’s strongest and most complete teams entering the season. Then injuries played a significant role in their slow start to the season with Allen, Williams, Bosa, James, Jackson, Johnson and star left tackle Rashawn Slater all going down with injuries. Allen Williams and Bosa are back, and James is on the mend from a concussion. And there’s still a possibility that Slater could return from the postseason.

The losses of Jackson and Johnson mean the Chargers might still not live up to their fullest potential this season, but they’re getting hot at the right time and could still make some noise in the playoffs as the AFC’s No. 5 seed.

The Chiefs are on their own four-game winning streak, and like with the Chargers, their strength of competition can also be questioned with two wins over the Broncos and victories over the Houston Texans and Seattle Seahawks. Kansas City’s last loss came in Week 13 at the Bengals in a close matchup between two AFC powerhouses.

That being said, the Chiefs have dominated all season, and while their defense has stepped up more in the last four weeks, their offense has actually taken a slight step back. Over the course of the entire 2022 season, the Chiefs rank first in passing EVE and 16th in rushing EVE.

Over the last four weeks, they’re fourth in passing EVE and 22nd in rushing EVE. It hasn’t helped that Kansas City has had to face a stout Broncos defense twice and that wide receivers Kadarius Toney and Mecole Hardman have missed time with injuries.

Beyond being one of the NFL’s most talented and best-coached teams with an elite QB-head coach combination in Patrick Mahomes and Andy Reid, the Chiefs, unlike the Chargers, also have been exceptionally lucky when it comes to avoiding injuries – especially those of the season-ending variety.

Kansas City has just four players on injured reserve in running back Clyde Edwards-Helaire, wide receiver Justyn Ross, tight end Jody Fortson and defensive tackle Tershawn Wharton. Only Ross and Wharton are out for the season.

The Bills will be playing with added emotion Sunday when they take on the New England Patriots as teammate Damar Hamlin continues to recover from cardiac arrest suffered on the field Monday against the Bengals.

That game against the Bengals will not be resumed, so we’re looking at the Bills’ last three games instead – wins over the New York Jets, Dolphins and Chicago Bears.

They’re still one of the NFL’s most dangerous offenses, but their passing attack, which ranks fifth on the season with an 0.674 EVE, has dropped to 16th with -0.129 EVE over the last four weeks.

Buffalo faces a difficult test Sunday against a New England defense that ranks first in EVE over the course of the season and fifth over the last four weeks.

We examined the rise of Trevor Lawrence and the Jaguars three weeks ago with the caveat that their next two games against the vaunted defenses of the Dallas Cowboys and Jets would be their toughest challenges of the season.

Another massive difference for Jacksonville is that cornerback Darious Williams has gotten over some early-season struggles and rebounded for the Jaguars in recent weeks thanks to a change in position. Williams looks like a slot cornerback at 5-foot-9, 187 pounds, but he had barely manned the role with the Rams before signing a three-year, $30 million contract with Jacksonville this offseason. Williams played the majority of his snaps in the slot over the first 13 weeks of the season to mixed results. The Jaguars swapped him outside to play opposite Campbell since Week 14, and he’s been stellar ever since.

Lawrence has been the biggest X-factor on offense as he’s ascended into the top tier of quarterbacks over the second half of the season. After posting a 4.89 pickable pass percentage that was worse than the league average (4.33%) in Weeks 1-8, Lawrence ranks second in the NFL to Joe Burrow (0.80%) with a 1.50 mark since Week 9.

Tight end Evan Engram has also exploded for 27 catches for 353 yards with two touchdowns in the last four weeks, and wide receiver Zay Jones has added four touchdown passes in the same span.

As long as the Jaguars beat a Titans team with Joshua Dobbs starting at quarterback, they’ll be able to play at home in the first round of the playoffs as a division winner. It’s already an accomplishment to make the playoffs one year after a disastrous 2021 campaign, but it’s not out of the realm of possibility that they could actually advance in the postseason considering how well they’ve played in recent weeks.