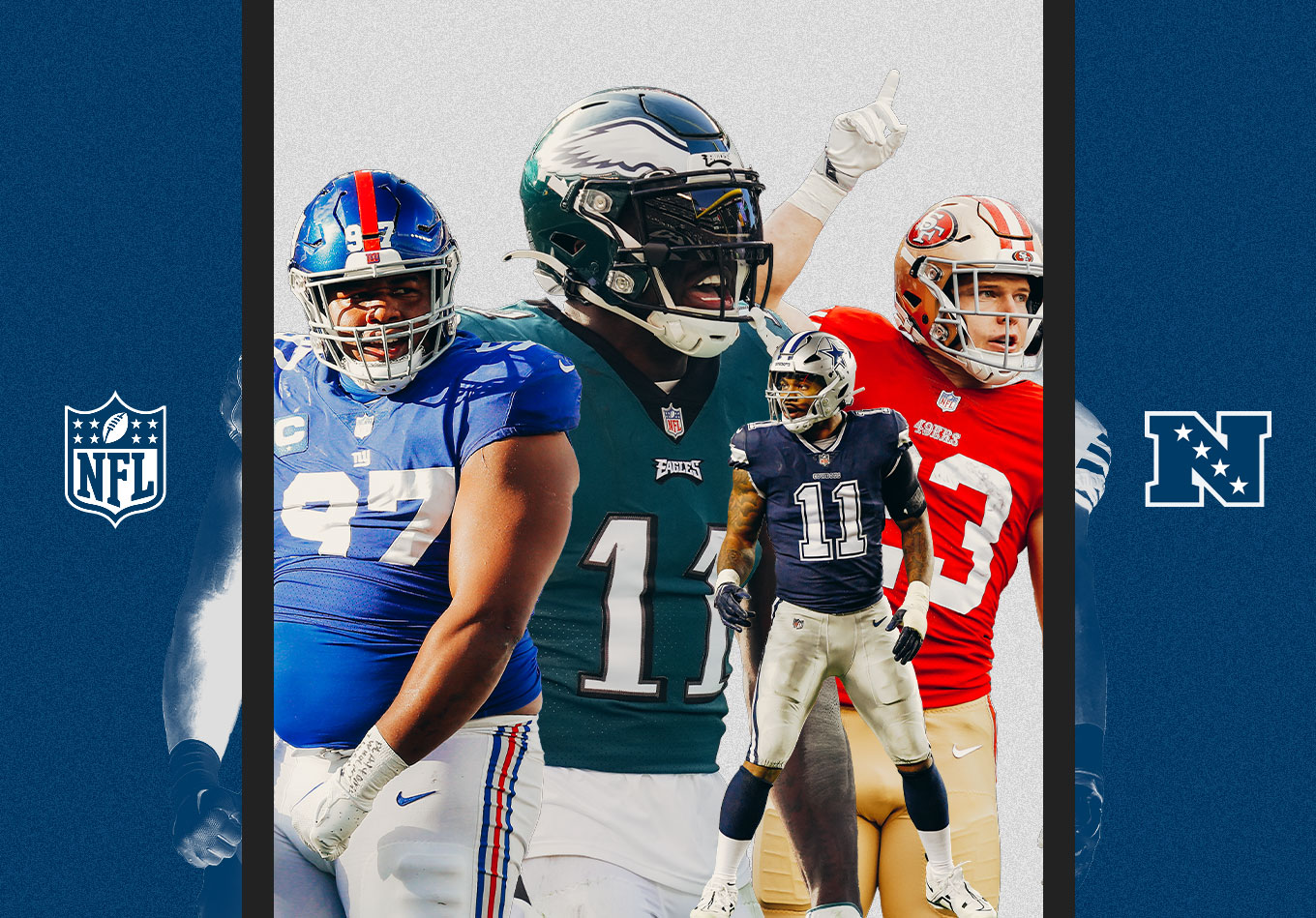 Daniel Jones and Brock Purdy were historically dazzling in their postseason debuts.

Both quarterbacks may need to be just as good again for their teams to advance to the conference championship, and that may not even be enough in one case.

Purdy added another chapter to his rags-to-riches tale when the San Francisco 49ers’ machine rolled on with last week’s methodical 41-23 victory over the Seattle Seahawks during Super Wild Card Weekend. The 262nd and last pick of the 2022 draft did his part by throwing for 332 yards – the most by any player in his first playoff game since the NFL/AFL merger – and becoming the first rookie quarterback to account for four total touchdowns in a postseason appearance.

A similarly strong performance might be necessary in the divisional playoffs for the 49ers to run their current winning streak to 12 games and reach the NFC title game for a second straight year. Standing in the way are the formidable Dallas Cowboys, who are the most complete opponent Purdy will have faced since taking over for an injured Jimmy Garoppolo in Week 13.

Our projection model, which factors in EVE (Efficiency Versus Expected) ratings for both team and quarterback as well as team values for pass protection/pass rush, skill position players/coverage defenders and run blocking/run defense, sees the Dallas-San Francisco game as a virtual dead-even matchup that’s by far the biggest toss-up of this week’s four divisional-round showdowns.

The NFC’s other game, however, sits at the opposite end of the spectrum, as the model gives Jones’ New York Giants a less than 10% chance of upending a rested and supremely talented Philadelphia Eagles squad that easily handed Big Blue a 48-22 defeat in this season’s lone meeting between the teams in which both were still playing for something.

New York set up a Round 3 between the longtime NFC East rivals by outlasting the NFC North champion Minnesota Vikings in a 31-24 thriller that delivered a nearly flawless outing from Jones in the first round. He became the first quarterback in league history with 300 passing yards, 75 rushing yards and two touchdown passes in a playoff game.

Prior to the start of this postseason, we analyzed every team’s potentially fatal flaw that could prove to be its biggest hurdle to winning Super Bowl LVII in Arizona. And when breaking down both of these NFC games, how each of these four combatants navigates those possible obstacles may determine their fates this weekend.

Here’s a more in-depth look at the factors that could have the greatest impact on the final outcome and determine who advances to the NFC championship game:

It’s overstating the obvious to say the Eagles wouldn’t be the NFC’s No. 1 seed and a solid favorite to represent the conference in the Super Bowl without the magnificent play of Jalen Hurts, a certain finalist for NFL MVP honors whose QB EVE of 1.21 yards added over expected in anticipated passing situations ranks fourth among qualified quarterbacks this season.

The second-year starter hasn’t done it alone, however, as he’s usually been well-protected by a stout offensive line that’s yielded the seventh-lowest pressure rate in the league. And Hurts has consistently shown to be extremely dangerous when given time. His 75.4 completion percentage when not pressured is fifth among quarterbacks with at least 150 pass attempts under those conditions, and his pickable pass percentage of 2.97 with a clean pocket is relatively low.

That latter number rises sharply, though, when under duress. Among quarterbacks with 70 or more attempts under pressure, Hurts’ pickable pass percentage of 9.57 is among the highest rates in the league.

The Giants can get to the quarterback, as their pressure rate of 42.2% ranks sixth overall. They didn’t hit that standard in either of their two regular-season meetings with Philadelphia, but they also didn’t have their three best rushers – Dexter Lawrence, Leonard Williams and Kavon Thibodeaux – in a 22-16 loss to the Eagles in the finale, and Williams also missed New York’s blowout loss to Philly in Week 14.

Lawrence and Williams are two of only six interior defensive linemen with at least 250 pass rush attempts this season to produce pressure rates above 20%, and they could be a handful for an Eagles front wall that won’t quite be at full strength on Saturday night with elite right tackle Lane Johnson set to play through a torn adductor muscle that will require offseason surgery.

If the Giants are to pull off what would be an improbable upset, it’s a must that they not only keep mistakes to a minimum, but keep Philly’s potent offense off the field as much as possible by controlling the clock.

That is something New York has done fairly well throughout its surprisingly successful season by utilizing an often efficient and at-times persistent rushing attack. The Giants rank third in the NFL in rushing EVE in expected run situations, and they’re 10-0-1 when having 30 or more rush attempts in a game. That includes last week’s playoff win over the Vikings when they churned out 142 yards on the ground on 30 carries.

The Eagles don’t have many warts on either side of the ball, but they are a mediocre 20th in EVE against the run and 27th in run disruption rate.

New York does possess the league’s fourth-leading rusher this season in Saquon Barkley, though Jones may pose the greater threat to Philadelphia with his underrated ability to make plays with his legs. The Eagles have allowed an average of 6.5 yards per rush to quarterbacks this season, with only Detroit permitting a higher number.

Jones is coming off a game in which he generated 59 rushing yards on six scrambles – a key factor in last week’s win as the Giants converted a strong 60% (9 of 15) chances on third and fourth downs.

It’s absolutely crucial for New York to establish the run and avoid a repeat of its Week 14 matchup with Philadelphia when the Eagles scored touchdowns on their first three possessions to build a 21-0 lead and provide an opportunity to unleash a furious pass rush that’s racked up a league-best 70 sacks.

That would create a mismatch squarely in Philly’s favor in the NFL divisional round, as the Eagles own the NFLs fourth-highest pressure rate at 42.7% and the Giants have allowed pressures on a league-worst 44.3% of pass attempts.

In a game that could be decided by the slimmest of margins (and in the Cowboys’ case, they may be wishing it doesn’t come down to an extra point), this may simply boil down to which team makes the fewer – or lesser – mistakes.

Turnovers have played a major role in the success of both these participants. The NFC West champion 49ers finished atop the NFL with a plus-13 turnover margin, while the Cowboys were second at plus-10 and led the league with 33 takeaways.

Dallas’ defense is great at getting the ball back, but the offense was a bit too casual with it during the second half of the regular season with 14 giveaways over the final seven games. Eleven of those miscues came courtesy of Dak Prescott throws, as the usually steady quarterback posted a 4.5% interception rate from Weeks 12-18. That was the highest of any player with at least 150 pass attempts over that stretch.

Prescott also had the highest pickable pass percentage of any quarterback during the regular season (min. 250 pass attempts) at 5.50, and his struggles are an undeniable cause for concern heading into a matchup against a 49ers defense that tied for the NFL lead with 20 interceptions in the regular season and ranked third in interception percentage.

Prescott did bounce back to an extent with a turnover-free, 305-yard, four-touchdown passing display in Monday’s 31-14 shellacking of the punchless Tampa Bay Buccaneers in the wild-card round. Still, two of his 32 adjusted attempts were what we deem “pickable,” so there was some good fortune behind those otherwise impressive numbers.

The Cowboys are awfully tough to beat when they aren’t beating themselves, as they’re 10-1 this season when turning the ball over one time or less. They’re also 8-1 when recording a positive turnover differential, with the lone defeat coming in overtime in Week 15 against a Jacksonville Jaguars team that was among the league’s hottest during the final stretch.

Purdy’s meteoric rise from the draft’s Mr. Irrelevant to starting quarterback of a legitimate Super Bowl hopeful in the NFL playoffs has to rank at or near the top of this season’s most unforeseen developments, but he’s also been well-spotted for success during his unbeaten run thanks to having one of the league’s premier defenses in his corner as well as some careful and crafty game management by Kyle Shanahan and his staff.

Purdy has attempted more than 30 passes just once in his six starts, and the one time he went over that figure (a 37-34 overtime win over the Las Vegas Raiders in Week 17) was the closest San Francisco came to losing during its string of 11 consecutive victories. He also hasn’t been tested all that much by the competition, having faced just one opponent (Tampa Bay) that ranks in the top 10 in defensive EVE and one (Washington) among the top 15 in pressure rate (three of the five teams he’s faced as a starter rank 25th or below).

The 49ers have put less on Purdy’s plate by running the ball 50.6% of the time over the course of his six starts, and they’ve been doing so at a remarkably high level to aid the rookie’s cause. San Francisco has averaged 175.3 rushing yards per game and 5.5 yards per attempt over those six games – both the highest marks in the NFL during that time.

San Francisco has leaned heavily on Christian McCaffrey since Garoppolo’s injury, and the midseason addition has more than answered the bell by routinely creating chunk plays as both a runner and receiver. McCaffrey’s 6.3 yards per touch since Week 14 is the third highest of any running back with at least 60 touches over that span, while his 3.76 yards before contact and big-play rate (gains of 10 or more yards) of 15.2% on running plays in that period trails only Baltimore’s J.K. Dobbins for the best in the league.

The Cowboys can be vulnerable to splash plays in the rushing department, as they yielded gains of 10-plus yards on 13.5% of opponents’ run attempts during the regular season to rank 26th overall.

They’ve also surrendered 135 rushing yards or more in each of their five losses.