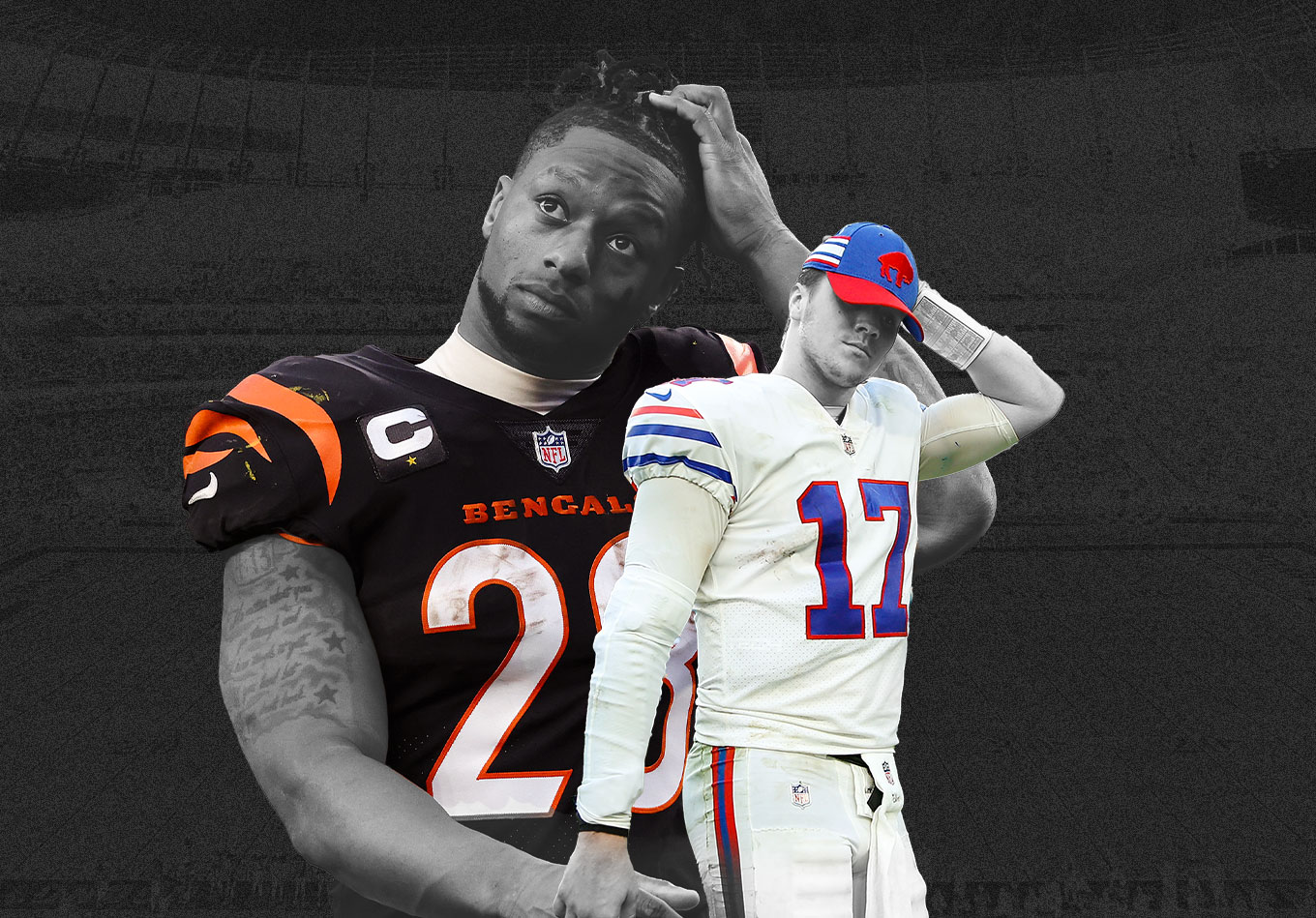 There isn’t one perfect team heading into the NFL playoffs, though some are certainly closer than others.

According to our projection model, the Philadelphia Eagles have a league-best 59.9% probability of reaching the Super Bowl out of the NFC.

The Kansas City Chiefs have a 43.3% chance of coming out of the AFC and the Buffalo Bills have the third-highest shot at 31.0%. But that doesn’t mean there aren’t issues that could bring them down in the playoffs.

With the postseason set to kick off on Saturday, let’s look at one flaw that could potentially tank each team.

You can certainly nitpick about Kansas City’s defense this season. The unit ranks 21st in our adjusted team ratings, but is coming off of a dominant Week 18 performance against the Las Vegas Raiders and ranks highly in defensive EVE (Efficiency Versus Expected) over the last five weeks.

A common thread has been Cincinnati’s ability to generate pressure without blitzing the Chiefs – a key against quarterback Patrick Mahomes, who is one of the NFL’s most efficient passers when blitzed year after year – and flooding the field with defenders. Kansas City will need to prove it can adjust if it plays the Bengals in the AFC championship game again this year.

He led the NFL with five red-zone interceptions this season and completed just 50.0% of his red-zone passes, ranking 21st among qualified QBs. The Patriots were able to keep things close against the Bills in Week 18, and while Allen did throw one red-zone touchdown, he also was intercepted at New England’s 15-yard line. Without two kick returns for touchdowns, Buffalo could have lost that game. Allen can’t continue to waste red-zone chances with interceptions in the postseason.

The Bengals turned around their early-season struggles to rip off eight straight wins to close out the 2022 campaign. Their offense and defense as a whole improved from the first quarter of the season when they went just 2-3, but their offensive line continued to struggle. They’ll have to figure out a way to keep Joe Burrow upright after ranking 24th in pass protection win percentage during the regular season.

Cincinnati also ranked just 28th in rushing EVE. And while a strong passing attack is more important in total offensive success, the Bengals might need to count on running back Joe Mixon and their offensive line, which is now missing right tackle La’el Collins, to help them close out games. That could prove difficult after they ranked 31st in the NFL in run block win percentage during the regular season.

That pass defense has improved dramatically since Week 14, however, when cornerback Darious Williams was moved from the slot back to outside where he thrived during the early portion of his career with the Los Angeles Rams. But we’d like to see that success in pass coverage continue in the postseason against some tougher competition. The Jaguars have faced the Tennessee Titans twice plus the New York Jets, Houston Texans and Dallas Cowboys. They’ll play Justin Herbert and the Los Angeles Chargers in the wild-card round at home.

The Chargers have one of the most talented quarterbacks in the NFL in Herbert, two top wide receivers in Keenan Allen and Mike Williams, and a superstar running back in Austin Ekeler. Yet their offense ranks 16th in our adjusted team ratings, 21st in overall offensive EVE, 14th in passing EVE and 29th in rushing EVE.

Offensive coordinator Joe Lombardi has shown an unwillingness to let Herbert uncork the ball with his conservative play-calling, though the team’s injuries at wideout may have played a role in that as well as Herbert’s league-high 17.1% checkdown rate. Herbert also ranks in the bottom third in deep passing attempt rate and in the bottom quarter of intermediate passing attempt rate. Over 60% of Herbert’s passes are shorter than 10 yards, and he’s 30th among qualified quarterbacks in air yards with 6.6 despite ranking fourth in well-thrown percentage.

Lamar Jackson missed five straight games to end the regular season with a lingering knee injury and he announced Thursday that he won’t play Sunday against the Bengals as well. That’s a major blow for Baltimore as its win probability dropped from 57.4% to 42.1%, according to our model.

The Ravens still managed to go 2-3 with Tyler Huntley and Anthony Brown at quarterback, but getting Jackson back would have been a game-changer in the postseason. Jackson’s pickable pass percentage (2.58) was half that of Huntley’s (5.66) and Brown’s (6.38) this season.

The Dolphins snuck into the playoffs with an 11-6 win over a New York Jets team quarterbacked by Joe Flacco following a near-late-season collapse that saw Miami lose five of its six games. It would be harder to find what the Dolphins have done well since they started going downhill in Week 13 against the San Francisco 49ers.

Their biggest issue, however, is the massive question mark at quarterback as they enter their wild-card round game against the Bills. Tua Tagovailoa hasn’t been cleared from his second officially diagnosed concussion of the season and is out Sunday. Teddy Bridgewater (dislocated pinky) was active Sunday but backed up rookie Skylar Thompson, who is expected to start again in the playoffs. Miami also has Mike Glennon on the practice squad.

The Dolphins have also had issues on defense – most notably in coverage where Xavien Howard has struggled and Byron Jones never returned off of the PUP list – and in running the ball this season.

Miami proved twice it can compete with the Bills in a Week 3 win and a 32-29 last-second loss in Week 15. And the Dolphins were believed to be one of the AFC’s premier teams when they were 8-3 and on a five-game winning streak. So, it’s entirely possible that Miami could have been competitive this Sunday in Buffalo if Tagovailoa could have played. But his health is of utmost importance, and with Thompson expected to start, it would be shocking if the Dolphins beat Buffalo. Our model gives them a 28.4% chance.

As far as potential fatal flaws go, run defense ranks pretty low. But the Eagles are 20th in EVE against the run and their defense is 19th in our adjusted team ratings.

Run defense does matter more if the Eagles can’t jump out to big leads, and competition is certainly fiercer in the playoffs. Philadelphia has been better against the run since signing Linval Joseph and Ndamukong Suh and after getting Jordan Davis back off of injured reserve.

Rookie quarterback Brock Purdy has played as well as anyone could have possibly envisioned as the last pick in the 2022 NFL Draft filling in for both Jimmy Garoppolo and Trey Lance. He hasn’t been a perfect facsimile of Garoppolo, though.

The hope at this point is that Purdy doesn’t crater in the playoffs when competition is ramped up. He wouldn’t be the first as 19 rookies have started in the playoffs in the Super Bowl era, and they’ve posted a 9-19 record over that span.

Most backup quarterbacks fall back down to earth in just a few weeks too. That hasn’t happened with Purdy thanks in large part to head coach Kyle Shanahan’s system. There’s still a possibility that Garoppolo could return in the postseason. The 49ers need to weather the storm until that point.

The Vikings are a massively flawed 13-4 No. 3 seed with a defense that ranks 26th in our adjusted team ratings and 29th in EVE against the pass.

A 41-17 loss to the Green Bay Packers on New Year’s Day was damning. Minnesota has shown offensive firepower this season thanks to Kirk Cousins’ connection with wide receiver Justin Jefferson, but the offense as a whole ranks just 15th in our adjusted team ratings and that’s almost certainly not good enough to make up for the postseason’s worst defense. They take on the Giants, who have their own issues, in the wild-card round.

Tom Brady actually hasn’t been bad this season outside of a brutal three-game stretch from Weeks 14-16. His offense overall, however, has been terrible. The unit ranks 28th in our adjusted team ratings, 20th in passing EVE and 31st in rushing EVE.

The solution for fixing the Buccaneers’ offensive issues in the postseason is simple and incredibly unscientific. Brady simply has to play like vintage Brady, which is easier said than done behind an offensive line he doesn’t trust, playmakers who don’t fit his skill set and a league-worst rushing attack.

Dak Prescott has thrown interceptions in seven straight games and has at least one pick in 10 of his 12 appearances this season. He tied Houston Texans QB Davis Mills for the league lead in interceptions despite throwing 85 fewer attempts and has a career-high 3.8 interception percentage.

The Cowboys QB has the second-worst pickable pass percentage (5.48) in the NFL ahead of only Taylor Heinicke of the Washington Commanders (7.82). His well-thrown percentage is sixth, however, so it hasn’t been all bad for Prescott.

The Cowboys have to hope his issues have been an aberration that can be fixed in the postseason, but it seems that Prescott sorely misses wide receivers Amari Cooper and Cedrick Wilson.

Daniel Jones has actually played pretty well this season, but the Giants still rank 25th in passing EVE and 22nd in overall offensive EVE heading into the playoffs. It certainly doesn’t help that they’re 24th in overall defensive EVE as well.

New York probably could afford to unleash Jones more in its wild-card matchup against the Vikings. He ranked 25th in QB EVE, but was slightly better than the league average (3.96) in pickable pass percentage (3.84) and fifth in well-thrown percentage (84.9). It hurts that New York couldn’t make things work with Kadarius Toney and that Jones heads into the playoffs with Darius Slayton, who barely played through the first quarter of the season, as his top target alongside Richie James and Isaiah Hodgins. Slayton, however, and ranks fifth among qualified wide receivers in 71.8 burn percentage.

Making matters worse, Seattle faces a 49ers team that ranks third in rushing EVE this season, has Christian McCaffrey at running back and Elijah Mitchell back in the offense. That spells trouble for a Seattle defense missing starting linebacker Jordyn Brooks.