Manchester City vs Tottenham Prediction and Preview | The Analyst 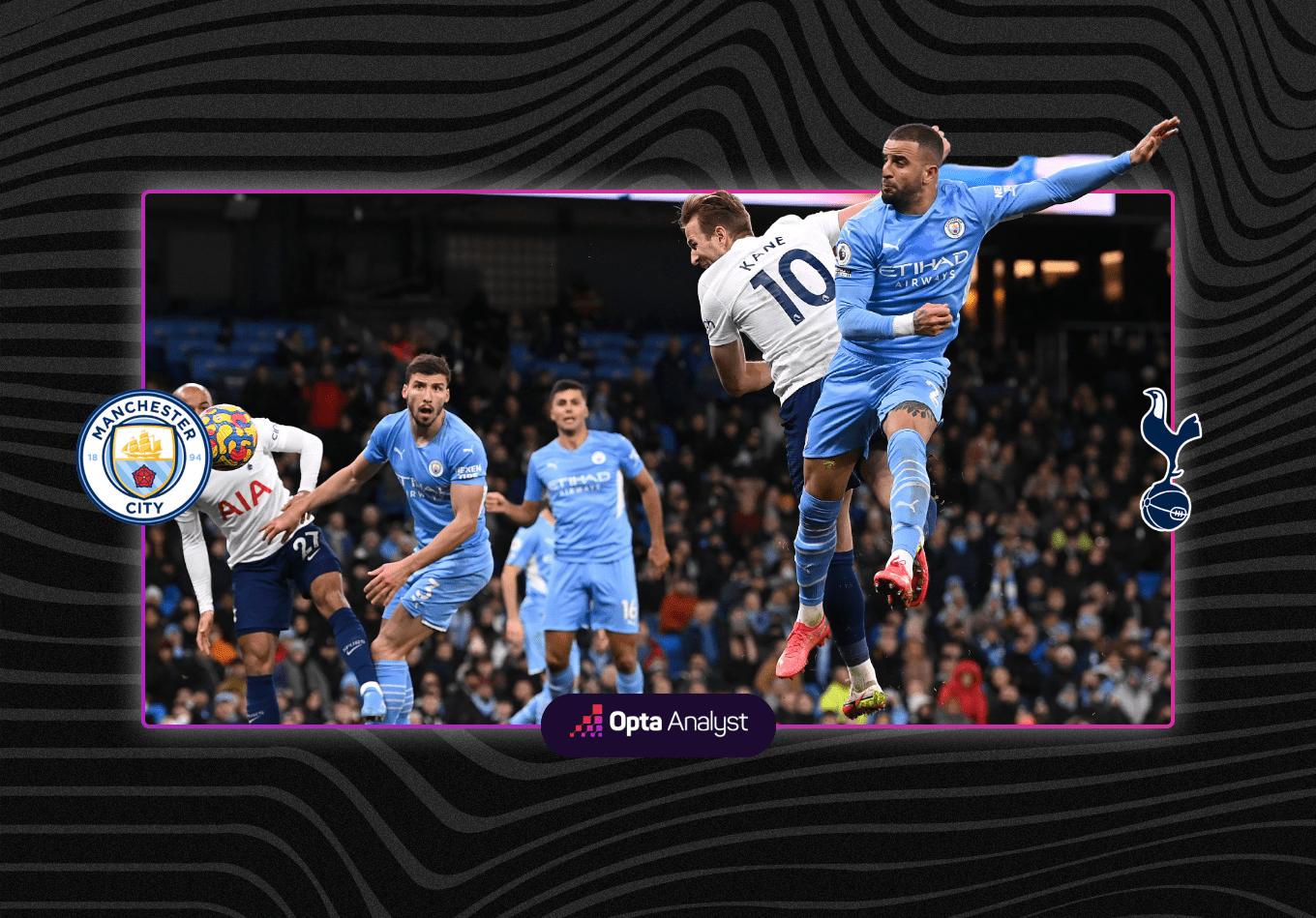 We preview the Premier League clash between Manchester City and Tottenham Hotspur, including our pre-match prediction for the battle between Pep Guardiola and Antonio Conte’s sides on Thursday at the Etihad Stadium.

The 51st Premier League head-to-head between Manchester City and Tottenham Hotspur will take place at the Etihad Stadium on Thursday evening, with City looking for a win to close the gap with Arsenal at the top of the league to five points.

Pep Guardiola’s side currently find themselves eight points behind the Gunners in the league table as it stands, with this match being Man City’s 19th of the league season, meaning they’ll be halfway through their Premier League campaign. This also means they’ll be a match ahead of Arsenal (18 games), who defeated Spurs themselves in the North London derby at the Tottenham Hotspur Stadium on Sunday.

For Man City to reduce the points deficit on Mikel Arteta’s side, they’ll have to improve on their terrible recent run against Spurs in the competition. They have lost four of their last five Premier League matches against Tottenham (winning the other), which is as many defeats as they’d suffered in their previous 19 league meetings with them (W12 D3 L4). In fact, if Spurs were to win this match, they’d become the first team to win three consecutive league games against a side led by Guardiola. That spans the Premier League, La Liga and Bundesliga.

The Spaniard’s record against Spurs is among the worst across his career versus a single opponent. He’s lost six of his 15 meetings with the north London side in all competitions, which is only surpassed by his total of defeats to Chelsea (eight), Liverpool (eight) and Manchester United (seven) since he began his managerial career with Barcelona B in 2007.

Guardiola’s loss to Manchester United last weekend in the derby was his 500th top-flight league game as a manager – a far from ideal way to celebrate the milestone. Despite this loss, he has still won 379 of his 500 top-flight league games as a manager with City, Barcelona and Bayern Munich (76%), with this being both the most wins and the best win ratio of any manager to take charge of at least 100 games across the big five European leagues since his first campaign in 2008-09 at Barca.

Conte’s suffering a tough time as Spurs manager. The experienced Italian has lost as many games at the club as he’s won since the start of November (W4 D1 L4). At the halfway point of 2022-23 – 19 games in – Spurs are three points worse off than they were at this stage last season (36 vs. 33 points).

This will be the first competitive meeting between Man City and Spurs since the entertaining battle at the Etihad Stadium 11 months ago, which the away side won 3-2 thanks to a 95th-minute Harry Kane header.

Man City thought they’d rescued a draw with Riyad Mahrez’s 92nd-minute penalty past Hugo Lloris (he scored this one, but remains one of the poorest penalty takers in Premier League history), before Kane’s injury-time winner sent Spurs fans into delirium behind the goal. At the time, this goal – timed at 94:25 – was the latest winning goal scored against Man City in a Premier League match since the start of 2010-11, but that record has since been snatched by Ivan Toney in Brentford’s win over City at the Etihad Stadium in November (97:17).

This victory also saw Dejan Kulusevski score in his first Premier League start for Spurs – the fourth Swedish player to net in their first start in the competition – before he also assisted Kane’s late winner with a brilliant cross from the right.

This was Spurs’ first league victory away at Manchester City since February 2016 under Mauricio Pochettino – a 2-1 win that also saw  Kane score. The last Spurs’ manager to win back-to-back Premier League away games at the Etihad Stadium was Harry Redknapp in November 2008 and May 2010, something Conte could replicate in this match on Thursday evening.

Manchester City have lost 29 Premier League matches whilst the reigning champions of the competition, with this 3-2 defeat being the fourth of those against Spurs. No team have beaten City whilst they were reigning PL champions more often than they have.

In a rare occurrence nowadays, Manchester City enter this game on a two-game losing streak across all competitions following defeats against Southampton in the EFL Cup and Man Utd in the Premier League. The last time that they lost three competitive matches in a row was back in April 2018.

Their most recent defeat came in Manchester derby on Saturday versus United, with Marcus Rashford’s late winner condemning them to their third Premier League defeat of the season, equalling last season’s total across the 38-game campaign. They haven’t lost two Premier League matches in a row since December 2018 – four years and 24 days from the date of this fixture on Thursday night.

Since the Premier League resumed post-World Cup, Man City’s tally of seven points from their four games (W2 D1 L1) is less than six clubs, including less-fancied Fulham (12), Brentford (10) and Brighton (nine). This is still three more than Spurs (four) in that period, who have fewer than relegation-threatened Wolves (seven) and Nottingham Forest (seven).

The Etihad Stadium has been a tough place to go for any team since Pep Guardiola took over in Manchester City, with the Citizens averaging 2.45 points-per-game at home since 2016-17. That form has continued so far this term, as City have won the joint-most points in home games across the 2022-23 Premier League season so far (22), while they have scored more goals at home than any other side this season (31).

Despite this, City are winless in their last two home matches, following a 2-1 defeat to Brentford in their final game before the 2022 World Cup (12 November) and a 1-1 draw against relegation-threatened Everton on 31 December. They haven’t gone three without a win in the Premier League at the Etihad Stadium since a four-game run between October and December 2016 (W0 D3 L1) in Guardiola’s first season at the club.

Since Antonio Conte took over as Spurs manager on 2 November 2021, they have been the fourth-best team for points won (89), which is 23 fewer than Man City (112 – the best) having played a game more.

His recent form as Spurs manager has been less impressive, however. After losing just six of his first 35 Premier League matches at the club (W22 D7) and averaging 2.09 PPG, he’s lost six of his last 12 games at Tottenham in league competition (W5 D1) and averaged 1.33 PPG.

With Erling Haaland on a three-match scoring drought for Man City – his worst such run in all competitions since a five-game run with Borussia Dortmund between March and April 2022 – Guardiola may need to rely on Kevin De Bruyne’s creativity to end that run and help Man City to victory.

The Belgian ranks among the leading assisters in Premier League history, but more importantly, he’s been in exceptional form once again in 2022-23 as City’s creative spark.

He has assisted 15 goals this season in all competitions for Man City. That’s one more than their next three highest assisters combined: João Cancelo (four), Rodri (four) and Bernardo Silva (five), who are just ahead of Phil Foden, Haaland and Jack Grealish (all three).

De Bruyne’s xG assisted total of 8.6 is by far the best in the Premier League this season, 3.1 higher than next-highest Kieran Trippier (5.5). He’s assisted a league-high 10 goals, including Jack Grealish’s goal at Old Trafford against Man Utd on Saturday, and created the most goalscoring chances for team-mates both overall (60) and from open play (42).

His recent Premier League form against Spurs isn’t great, with no goal involvements across his last four appearances versus them (281 mins) and only two assists (and no goals) in his last eight matches versus Spurs in the league across 517 minutes of action. But he didn’t have Haaland to aim his passes at in any of those games.

Haaland will be a name that irks Harry Kane, with the big Norwegian taking the England captain’s crown as the most feared striker in the Premier League after arriving in Manchester this summer.

The former Dortmund striker is the Premier League top scorer with 21 goals, but Kane follows him in the standings with 15 in 19 games himself. The Spurs striker has only scored more goals in his opening 19 appearances of a Premier League season on one occasion (18 in 2017-18), while this is 10 more goals than Kane had at this stage last season and only two off his end-of-season tally from 2021-22 (17) in the competition.

Harry Kane is now two goals away from becoming just the 28th man to score 200 English top-flight league goals in the history of the EFL. His 198 goals have come in exactly 300 top-flight appearances, giving him an exceptional ratio of 0.66 goals per game.

When Kane does hit this goal landmark, he’ll become the first player to reach 200 top-flight league goals for an English club since Ian Rush did so for Liverpool in August 1993 – just shy of three decades ago. Before Rush, it was the late, great Jimmy Greaves, also for Spurs, in the late 1960s (220 goals in Division One).

It is Greaves that stands in the way of another record that could be broken this weekend. The former Spurs great scored 266 competitive goals for the club (excluding two in the 1962 Charity Shield), which is one more than Kane’s tally of 265. With clean sheets hard to come by for Man City recently – just one in their last six Premier League games – there’s every chance Kane can equal that club record against Ederson in the City goal this week.

Our predictor fancies Manchester City to get over their poor run of form with a victory over Tottenham in this meeting. The supercomputer gives them a 62.7% chance of winning at the Etihad Stadium on Thursday night, but bear in mind City were expected to defeat Manchester United on Saturday, too (54.3% chance of victory).

A draw is being deemed more likely (22.5%) than a Spurs away win (14.8%). Good job for City, as they need the points on the board after falling behind Arsenal in the supercomputer’s Premier League season predictions for the first time in 2022-23.

Following a derby win for Arsenal over Spurs on Sunday, a day after City’s defeat to Man Utd, the Gunners moved to 51.4% favourites in our season predictions. Guardiola’s side are still being given a very decent chance of retaining their English Premier League crown (45.4%), but this is slightly below their preseason value of 47.0%.