Liverpool vs Chelsea Prediction and Preview | The Analyst 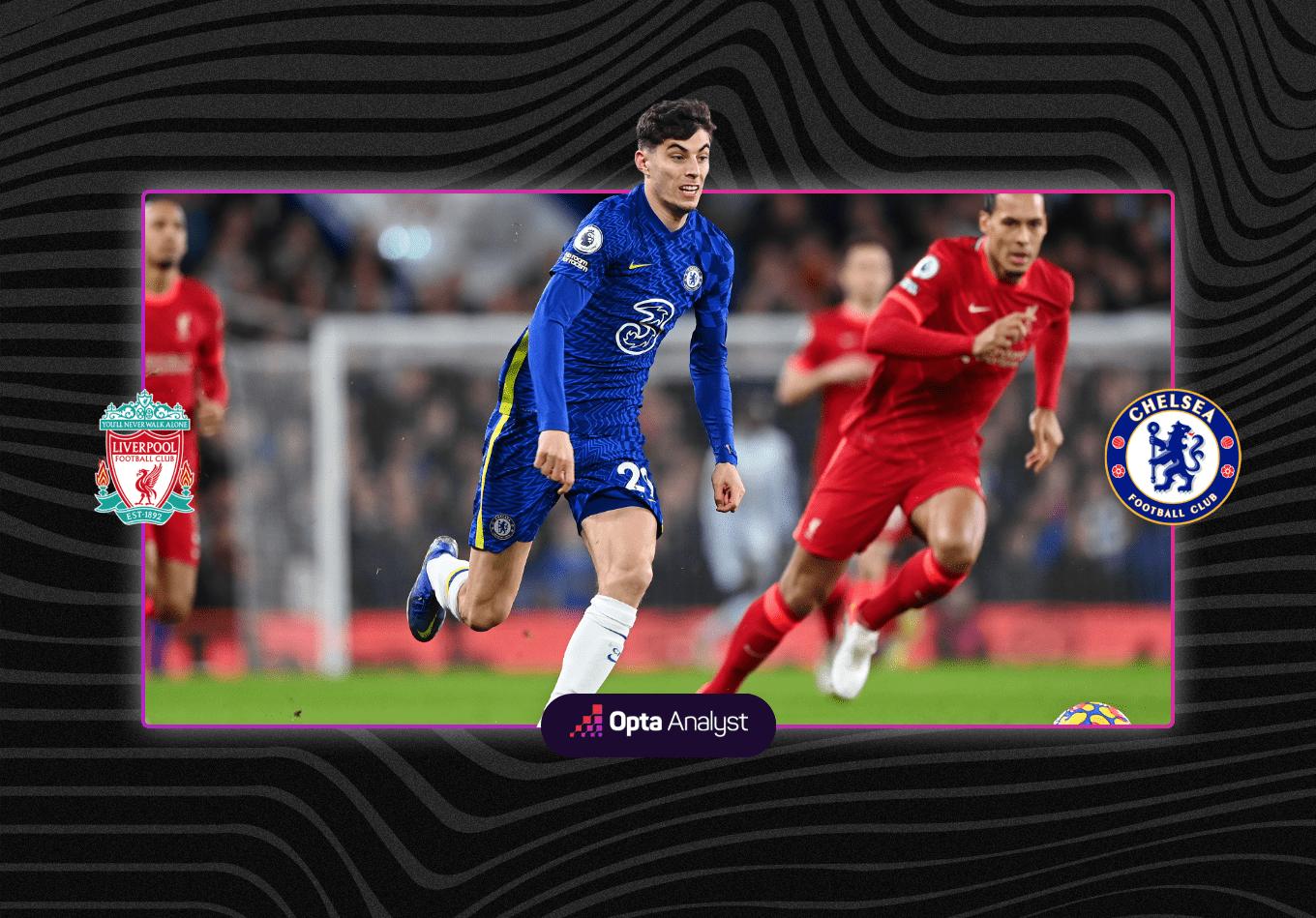 Liverpool vs Chelsea: Prediction and Preview

We preview the Premier League clash between Liverpool and Chelsea, including our pre-match prediction ahead of the early Saturday kick-off between Jürgen Klopp and Graham Potter’s side at Anfield.

It apparently takes 21 months to travel to and from Mars. And if you had left on such a space odyssey and returned to Earth in time for this Saturday’s Premier League action, you might have thought you would be watching a battle for the title between Liverpool and Chelsea at Anfield.

Instead, what you’d be greeted by is ninth vs. 10th in the table. And a battle of the embattled.

It’s not exactly the showpiece game you would imagine that Jürgen Klopp would be hoping for in his 1000th match as a manager. But that doesn’t mean the 60th head-to-head meeting between these two sides in the Premier League isn’t going to be one of full of intrigue.

It has been a miserable start to 2023 in the Premier League for Liverpool, even if they did enjoy FA Cup success against Wolves earlier in the week. The Reds have lost both of their league games against Brentford and Brighton, conceding three times in both matches. They haven’t lost their first three league matches in a calendar year since 1953, which was also the last time that they shipped three or more goals in a row in the top-flight.

These defensive worries will be concerning Klopp, despite having a side packed with the talent of Virgil van Dijk and Trent Alexander-Arnold, as they come up against Chelsea whom he has won just six of his 19 meetings against, his lowest win rate (32%) against any English side he’s faced 10 or more times.

The German has been a model of consistency at the Liverpool helm – Graham Potter will become the seven different Chelsea manager he has faced in England – and he’s only failed to register victories against Guus Hiddink (one draw) and Thomas Tuchel (four draws and a defeat). It will be the sixth time he’s faced off against Potter in an EPL dugout though, recording three wins, two draws and one defeat during Potter’s spell at Brighton and Hove Albion.

Victory against Crystal Palace may have kept the metaphoric ‘dark clouds’ away from Stamford Bridge for a little while longer, but with just two wins in their last 10 leagues games– none of which have come on the road – Potter will need his magic to start working in his 20th game in all competitions in charge of the Blues. Stumble here and his time at the club could end abruptly.

We are going to conveniently ignore the pair of cup finals the two sides played out last season (both of which went to penalties and ended up with Reds’ success) and instead focus on the last time they met in the Premier League, over a year ago.

All four of the goals came in the first half, with Mohamed Salah becoming the club’s outright Premier League top scorer in London with his 14th in the capital to put the Reds 2-0 in front. But for the second time in the 2021-2022 season, Liverpool would fail to win the game despite being in such an advantageous position. The other occasion came against the Graham Potter led Brighton and Hove Albion.

Just 245 seconds separated Mateo Kovačić and Christian Pulisic’s response for the Blues in what would end up being the second of four consecutive draws the sides played out in competitive fixtures, although this fixture has never been drawn in three consecutive league meetings.

The game was also notable for Sadio Mané receiving the earliest booking (15 seconds) in a Premier League game since 2006-2007, although it is quite some way off Vinnie Jones’ efforts for Sheffield United against Manchester City back in 1990.

Despite those back-to-back defeats to start the calendar year, Liverpool can take solace in the fact this Saturday’s game takes place on home soil. They’ve only lost one of their last 32 Premier League matches at Anfield, finding the back of the net in each of them, scoring 79 goals at an average of 2.5 per game.

However, the home team has won just three of the last 17 Premier League games between the two sides (seven draws and seven losses), though two of those did come at Anfield in 2019 and 2020.

And with six defeats already in the Premier League this season (also losing to Leeds United, Nottingham Forest, Arsenal, Man United) , they are fast approaching Klopp’s previous highs of nine (2020-2021) and eight defeats (2015-2016) across a campaign.

We’ve already briefly touched on Chelsea’s away day blues, but it really is quite drastic. They are looking to win consecutively in the Premier League for the first time since October where, granted, they strung together a run of four victories on the bounce against West Ham, Crystal Palace, Wolves and Aston Villa, having suffered defeat against Southampton

Maybe the change of kick-off time will be of benefit to them, as this Saturday marks the first time they’ll be playing in the 12:30 timeslot, although they have lost four of their six such games, including defeats in each of those matches they played on the road.

With Darwin Núñez the latest to join the Liverpool injury list alongside Roberto Firmino, Diogo Jota and Luis Diaz, even more pressure will now be heaped on the shoulders of Salah if the Reds are to get anything from this game.

The Egyptian has been heavily involved in any attacking sequence Liverpool have put together so far this season – leading the way in both shots (58) and chances created (33) for the Reds. But as Brighton proved last time out, it has been possible to stifle his attacking threat, reducing him to just 38 touches during the game, of which only four came in the Seagulls box.

His seven goals in the Premier League this season and four assists might not be quite setting off alarm bells in the owner’s box yet, despite Liverpool handing him a contract extension over the summer and Salah returning from a ‘proper’ break during the World Cup.. But the 30-year-old is underperforming his xG so far this season, perhaps highlighting a dip in his finishing form or rather a reflection on his need to create more opportunities for the side following the departure of Mané during the off-season.

That being said, excluding own goals, 10 of Liverpool’s last 11 goals at Anfield in all competitions were scored by either him or Núñez, after the pair scored just one of the Reds’ first 16 home goals.

It may be taking a little while for the Salah flame to spark, but having scored in his last two league games against Chelsea (as many goals as he had managed in his previous eight games against his former side), a return to the goalscoring form he’s capable of will come as a welcome relief to Klopp and co.

The match-winner last time out for Chelsea, has Graham Potter finally found the role he wants Kai Havertz to play? Or will the German find himself one of the rare sales for the Blues this transfer window? Another strong performance against Liverpool might be enough to keep him around Stamford Bridge a little longer, even if Bayern Munich appear keen to step up their interest.

The German leads the way when it comes to goals (five), shots (35), shots on target (17) and shots off target (14) for Chelsea this season. It’s probably not surprising when you consider he has played the third most minutes of any of their players this season (1336), behind Thiago Silva (1523) and Mason Mount (1336). He’s been used in a variety of position across the forwards set so far this campaign, but with the arrivals of Mykhailo Mudryk and João Félix (although he is suspended for this game), we are expecting to see Havertz, if he stays, being used more in a central position.

Havertz does lead the way across the season when it comes to touches in the opposition box for Chelsea (95), but the nine touches he enjoyed against Crystal Palace last time out were the most he’s had in a Premier League game since October (Brighton & Hove Albion, 10). Building upon that and continuing to convert the chances that is created by the abundance of talent alongside him, will help their rise up the table.

He’s also already proved that he enjoys a game at Anfield, having scored in this exact fixture last season. The last Chelsea player to score in consecutive away league games against Liverpool was Joe Cole way back in 2005. How Potter would dearly love that record to be matched if the Blues can take the victory this time out.

Our predictor is in no doubt that Liverpool will put a stop to their two-match losing run in the Premier League with victory over Chelsea. The supercomputer gives the Reds a 51.8% of winning at Anfield on Saturday and also gives the draw more chance of coming true (26.4%) than Graham Potter’s side picking up the three points (21.8%).

Perhaps we shouldn’t be too surprised by this. Liverpool have lost just two of their last 15 Premier League matches against Chelsea, with the Blues having only lost more Premier League games against Arsenal (24) than they have against the Reds (23), with 15 of those defeats coming at Anfield.

A Liverpool victory will give their hopes of UEFA Champions League qualification a huge boost, with our supercomputer Premier League season predictions still giving them a 37.8% chance of finishing in the top four (let’s try to ignore that 0.1% at the top shall we), although it does believe a fifth-place finish is the most likely outcome for the side, behind Manchester United and Newcastle United, but ahead of Tottenham Hotspur. Victory for Chelsea though will have huge ramifications on their current expected eighth place finish, just ahead of Fulham, and maybe keeping their own Champions League dream alive.