Prepping Purdy: How Have Rookie Quarterbacks Fared in the Playoffs? | The Analyst 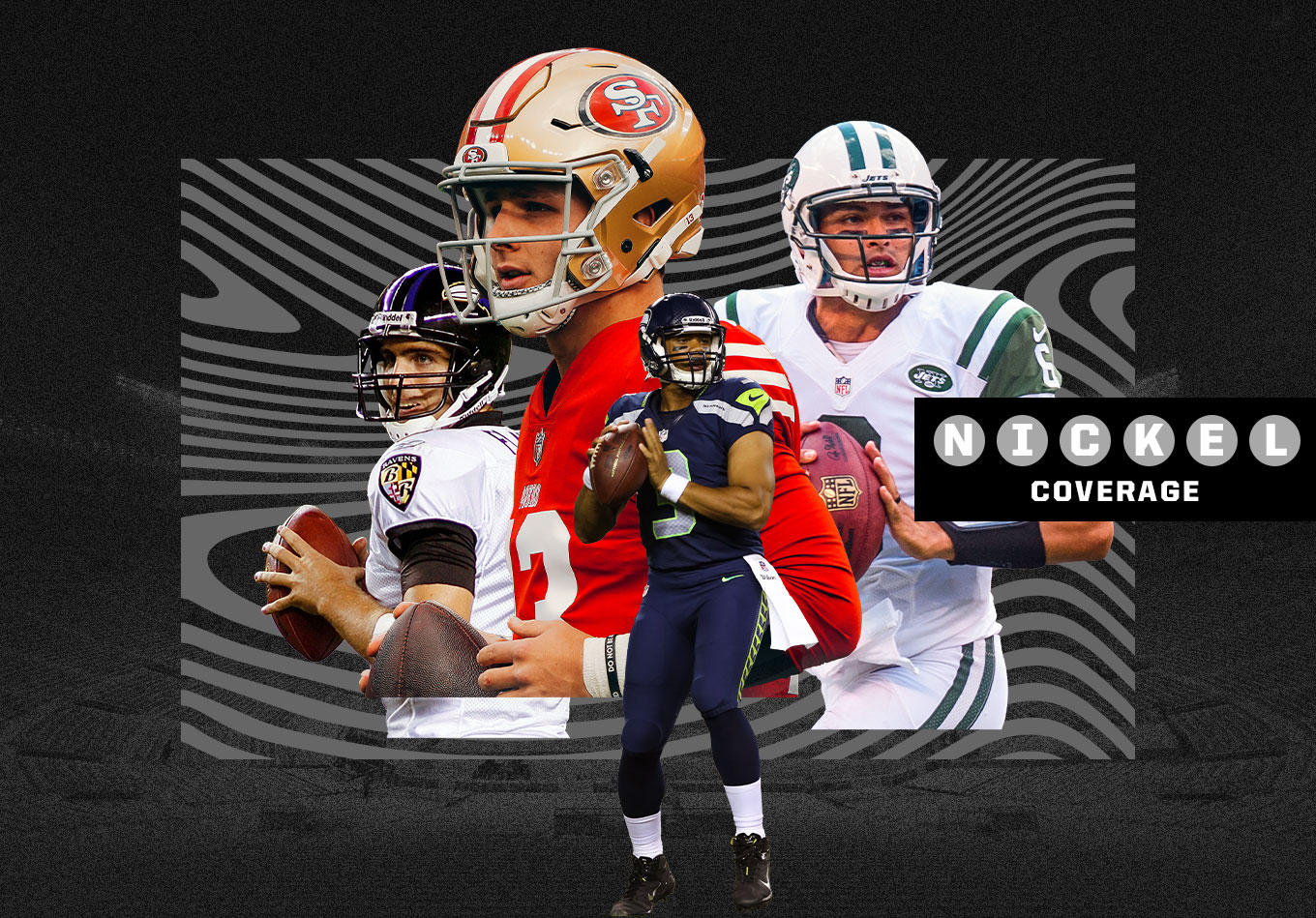 Prepping Purdy: How Have Rookie Quarterbacks Fared in the Playoffs?

In the 2022 NFL season, there have been few stories as remarkable as that of San Francisco 49ers quarterback Brock Purdy, who heads into the postseason with a golden opportunity to become the first rookie quarterback to lead a team to Super Bowl glory.

Purdy has been a revelation since being thrust into the spotlight as the starting quarterback after Jimmy Garoppolo suffered a fractured foot in the Week 13 win over the Miami Dolphins.

This was supposed to be Trey Lance’s team, but the third overall pick in 2021 endured his own season-ending ankle injury in Week 2.

So now there are pertinent questions asking if it should be Purdy’s job for the long term, and they are merited given how he has performed in an extraordinary start to his career.

Belying his status as the last pick in the 2022 draft, Purdy has confidently piloted one of the best offenses in football, with the 49ers averaging a league-leading 33.6 points per game since he became the full-time starter.

In addition to Purdy ensuring the 49ers beat the Dolphins following Garoppolo’s first-quarter departure, he has since won each of his first five starts to help the NFC West champions finish the regular season on a 10-game winning streak.

With the 49ers’ win over the Arizona Cardinals in Week 18 in which he threw three touchdowns, Purdy became the third rookie quarterback to win his first five starts along with Ben Roethlisberger (who won his first 13 in 2004) and Mike Kruczek (won his first six in 1968).

The support system for Purdy as he looks to make league history is excellent. San Francisco’s offense is stacked with playmakers, with the addition of Christian McCaffrey boosting a group that already included Deebo Samuel, Brandon Aiyuk and George Kittle.

With a defense led by NFL Defensive Player of the Year frontrunner Nick Bosa establishing itself as the NFL’s best, the 49ers finished the regular season second in overall EVE.

By that measure, San Francisco is the best team in the NFC (the Kansas City Chiefs are No. 1 in overall EVE), but history is firmly against Purdy having success in his quest to guide them to a sixth Lombardi Trophy in franchise history.

Nineteen rookies have started in the playoffs in the Super Bowl era, and it hasn’t gone well as they’ve posted a 9-19 record over that span.

While no rookie quarterback has lifted the Lombardi, the performances of a selection of those to have entered the heat of the postseason battle in their first season offer a glimpse into what may lie ahead for Purdy entering his start against the Seattle Seahawks on Saturday.

Roethlisberger may be the best parallel we can draw for Purdy given their shared place in the NFL history books. The Steelers great enjoyed an entirely different draft experience in 2004, playing the role of frustrated spectator until the 11th pick as the famous Eli Manning-Philip Rivers saga took its course.

Roethlisberger made the San Diego Chargers and New York Giants initially look foolish for not valuing him higher, helping a juggernaut Steelers team to a 15-1 record and the No. 1 seed in the AFC. Yet his first postseason proved a difficult one for Big Ben, with Roethlisberger completing only 57.4% of his passes for 407 yards, three touchdowns and five interceptions.

Three of his five picks came in the AFC championship game loss to the New England Patriots, whose opportunistic defensive performance inspired them to a third Super Bowl appearance – and ultimately a third Super Bowl title – in four seasons.

Purdy has the benefit of having the league’s premier defense on his side, and the top-seeded Philadelphia Eagles would appear to be the only team in the 49ers’ way who possess the capability to pose him problems akin to those Roethlisberger experienced back in January 2005.

The NFL has changed significantly since Bill Belichick’s defense denied Roethlisberger a chance at history, but the Steelers’ conference championship game woes of 18 years ago are a scarcely needed reminder of the value of protecting the football.

Purdy, who has 13 touchdowns to four interceptions, has done a largely impressive job in that sense and the 49ers will be excellently positioned for a deep run if that continues. If the Niners do fall short, Purdy may take heart from Roethlisberger’s second season when he led the Steelers to victory in Super Bowl XL over the Seahawks.

Flacco and Sanchez are also decent examples that could be a guide to how Purdy’s playoff journey may go. Unlike Purdy, they were both highly drafted quarterbacks, but they are comparable in that they had the benefit of supporting casts built for January success. Both made it all the way to the AFC championship game.

Flacco did not have to do much to get to that point with the 2008 Ravens. In his three postseason games, Flacco completed just 44.0% of his passes for 437 yards, one touchdown and three interceptions.

Yet the Ravens were able to succeed by leaning on a third-ranked defense and a fourth-ranked run game, taking the pressure off Flacco. Baltimore gave up just 19 points over the first two rounds of the playoffs and it was only when the Ravens faced a top-ranked Steelers defense in the title game that Flacco’s shortcomings as a rookie proved decisive.

A year later, Sanchez fared better with the Jets, hitting on just over 60% of his passes for 539 yards, four touchdowns and a pair of picks. Though his numbers were better, the formula was the same. The Jets rode Rex Ryan’s dominant defense and a ground attack that led the NFL in yards per game to the conference championship.

Flacco went on to enjoy one of the great postseason runs in 2012 when he led the Ravens to a win over the 49ers in the Super Bowl, but Purdy will try to surpass Sanchez’s achievements following the electric start to his career.

Purdy has thrived throwing the ball to the intermediate area of the field. On throws between 10-20 yards, he has an 83.7 well-thrown percentage that’s second only to Andy Dalton (85.6) among quarterbacks with at least 20 such attempts.

But with McCaffrey, Samuel and Elijah Mitchell giving the 49ers arguably the most versatile backfield in the NFL (one in which both McCaffrey and Samuel are threats to run the ball, catch it out of the backfield or line up in the formation as a receiver), San Francisco can significantly ease the pressure on Purdy by leaning on the ground game and short checkdown throws that always have the potential to be turned into big plays.

On top of that, the defense, which finished the season with the second-best success rate (35.9%) in the league, has consistently shown its ability to put the team on its back despite some signs of vulnerability in recent weeks.

One of the best rookie quarterback performances in the playoffs came from a player who was previously the thorn in the 49ers’ side. Wilson won the Super Bowl in only his second season, but the groundwork for that run was laid during a superb rookie year.

The Seahawks star was excellent in his first postseason, completing 62.9% of his passes for 572 yards, three touchdowns and an interception. He posted a passer rating of 102.4, leading the Seahawks to a win over Washington at FedEx Field in the wild-card round before falling short against the Atlanta Falcons in the divisional round.

Wilson had the benefit of a full regular season under his belt and was a better athlete than Purdy is at that point in his career. But the 49ers will hope the repetitions Purdy has to his name will be enough for him to perform at a level akin to that of Wilson, albeit with expectations of better results.

As the overall record indicates, starting a rookie quarterback in the playoffs typically ends badly. Matt Ryan threw two interceptions in his postseason debut in 2008 and Dalton was picked off three times as he and the Cincinnati Bengals suffered wild-card heartache in 2011. Andrew Luck led the Colts to the playoffs in 2012, but he posted a passer rating of just 59.8.

Robert Griffin III’s sole playoff appearance in 2012 ended in a knee injury as he was beaten by Wilson and the Seahawks in a battle of the rookies. In 2018, Lamar Jackson was confounded by a Los Angeles Chargers defense that frequently deployed seven defensive backs to hold the dual-threat QB in check and restrict him to a 48.3 completion percentage.

Mac Jones was the last rookie to start a playoff game last January. He was intercepted twice as the Patriots couldn’t keep up with the prolific Buffalo Bills offense in a 47-17 loss.

Even if Purdy maintains his stellar level of play, there is a chance that it still may not be enough. Dak Prescott threw for over 300 yards and three touchdowns in his playoff debut, but the Dallas Cowboys fell to Aaron Rodgers and the Green Bay Packers 34-31 in the 2016 divisional round.

That game serves as a perfect illustration as to why the playoffs are a different animal. The stakes go up, and the standard can also rise to a point where a player’s best is often not good enough.

It will soon become apparent whether Purdy has what it takes to give this Cinderella quarterback story a fairytale ending.