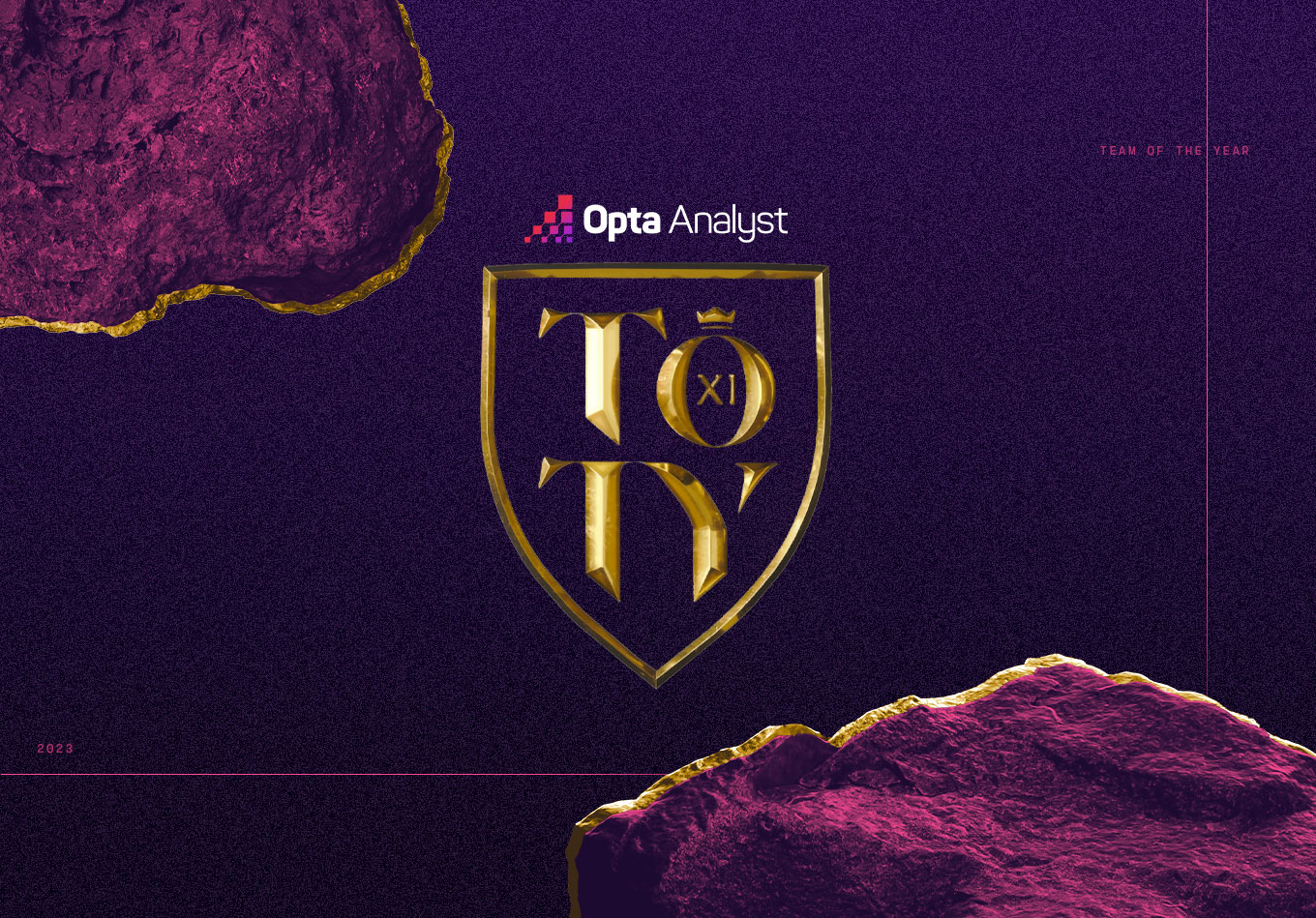 After a scintillating 12 months of football, EA Sports have shortlisted what they consider to be the 100 best footballers across the globe, before handing over the list to fans from around the world and asking them to vote on which players they think should make the final XI.

With the EA Sports’ FIFA 23 TOTY vote closing later today, we thought it would be a good time to make our selections based on real-life Opta data ahead of the TOTY reveal on Thursday.

Using the 100-man shortlist, we have picked 11 players in a traditional 4-3-3 formation based on who have impressed us the most through their metrics in 2022, both in club football and on the international stage.

So, who made the team?

There are 10 contenders for the goalkeeping spot in the FIFA 23 TOTY, but despite stiff competition, there is only one man who can don the gloves for the Opta Analyst team. That man is Liverpool and Brazil shot-stopper Alisson.

He may have ended the year in disappointment with his Brazil side being knocked out of the FIFA World Cup in Qatar at the quarter-final stage following a penalty shootout against Croatia, but he was in exceptional form at club level with Liverpool across 2022.

No goalkeeper at a top five European league club kept more competitive clean sheets than the 23 he did across 2022 for Jürgen Klopp’s side. Not only this, but the Brazilian’s saves prevented the opposition from scoring nearly 13 goals more than the expected goals on target (xGOT) data suggests that the ‘average’ goalkeeper should have conceded (44 goals conceded from an xGOT of 56.7). This is way higher than any of the other nine contenders for this spot in the TOTY. Emiliano Martínez may have helped Argentina win the World Cup in December, but at club level, he conceded three more goals than his xGOT suggested he should have (39 goals conceded vs. 36 xGOT).

Alisson didn’t make a single error leading to a goal at club level in his 52 appearances for Liverpool in 2022, while he also saved two of the five penalties that he faced across his 4,710 minutes of action.

Picking four defenders from the 25 shortlisted for the FUT23 is a difficult job, but someone’s got to do it. We’ll start with our two central defenders.

Our goalkeeper Alisson will have a familiar face in front of him, as Liverpool team-mate Virgil van Dijk is the first defender selected in our FIFA 23 TOTY.

The Dutch international had another strong calendar year and ended it with heartache at the World Cup, as his Netherlands side were knocked out on penalties in the quarter-final against eventual winners Argentina. Despite this penalty shootout despair, the Netherlands ended 2022 unbeaten in normal time (W9 D4 L0) and Van Dijk was a key part of that form. At club level with Liverpool, he won 82% of his aerial duels in the Premier League in 2022 (101/124), the highest percentage of any player to contest at least 50. It was certainly a busy year for the Reds’ defender, as among players in all competitions for teams in Europe’s top five leagues, Van Dijk both played (54) and started (54) the most games in 2022, eventually playing more minutes than anyone else (4,890) too.

Bremer had an excellent 2022, winning the Serie A Best Defender award and making the Serie A Team of the Year in 2021-22 for his performances with Torino. This earned him a move to Italian giants Juventus in the summer and also his first appearances for the Brazilian national team.

Arguably this could be one of the more controversial picks in our FIFA 23 TOTY, but Bremer’s 2022 stats are impressive – he made the most interceptions of any Serie A player (69) and won the most aerial duels in the competition across the calendar year (90).

Our right-back selection must be Morocco and Paris Saint-Germain star Achraf Hakimi. He was instrumental in Morocco’s surprise run to the semi-finals of the 2022 World Cup and even made the Opta Team of the Tournament after making the official Africa Cup of Nations XI in January 2022.

At club level for PSG, he picked up his first Ligue 1 title win in 2021-22 to follow his Serie A success with Internazionale a season earlier. Across 2022 at PSG, Hakimi was one of the biggest attacking threats from defence, with the Moroccan completing more passes in the final third than any other Ligue 1 defender (362) and the second-most touches in the opposition box by a defender in 2022 (82).

Left-back Théo Hernández was another player to make the Opta World Cup 2022 Team of the Tournament, as he created the most chances of any defender at the finals (11). So it’s no surprise that the Frenchman completes our four-man defence.

Hernández is another player who causes opposition teams problems in the attacking half of the pitch from defence, with his 57 shots in 2022 the most of any Serie A defender. Quite often his threat comes from his ability to drive the ball up the pitch at his feet, with the Milan left-back having carried the ball further than any other player in Serie A across 2022 (6,932m).

Picking our midfield trio from a 35-man shortlist of fantastic midfielders is not an easy job.

As we’ve got an exceptional front three that can provide the goals and creativity, we’ve decided to pick one defensive-minded midfielder alongside a tempo-setter for our FIFA 23 TOTY. That leaves space for just one creative midfielder in the three.

That creative midfielder has to be Manchester City star Kevin De Bruyne. The Belgian assisted the most goals of any player for a top five European league club across all competitions in 2022 (26), with his 154 chances created also the highest of all players considered. Granted, he ended the year on a low with Belgium’s terrible World Cup performance and group stage exit, but De Bruyne is a player we can’t leave out.

Of players to play at least 2,000 minutes of league action across the top five European leagues in 2022, no player won possession back from the opposition more often on a per-ninety basis (5.8/90) than Rodri. The second Man City player in our three-man midfield will act as the ball-winner, whilst also having the ability to set the tempo – he was one of only three players across the top five European leagues in 2022 to average more than 80 successful passes per 90 (85.9).

Alongside Rodri in a deeper midfield role than KDB will be experienced Real Madrid star Toni Kroos.

Across his 2,037 minutes of league football in 2022, he averaged 88.8 successful passes per 90 minutes – only Marco Verratti (92.2) averaged more across the top five European leagues, while he also chipped in creatively with an average of two chances created for team-mates for every ninety minutes he was on the pitch.

This is a man who won’t give the ball away to the opposition easily. In addition to being the player who completed the most passes in La Liga (2,009) and the Champions League (904) in 2022, Kroos had the best passing success rate in both competitions (95% and 94%).

Lionel Messi’s 2022 at club level didn’t witness the standard of goalscoring that we’ve come to expect from the seven-time FIFA Ballon d’Or winner but following his exploits at the 2022 FIFA World Cup, it’s impossible to leave him out from this FIFA 23 TOTY XI.

Messi scored 17 goals in 37 games for PSG across all competitions in 2022, but he was still a creative menace. Only fellow Opta Analyst TOTY selection Kevin De Bruyne (26) assisted more competitive goals among players at top five European league clubs across the year than Messi did (24).

Messi finally won the FIFA World Cup, with his exceptional performances the key reason behind Argentina’s success in Qatar. Now the player with the most FIFA World Cup appearances (26), Messi also became the first player to score in the group stage, round of 16, quarter-final, semi-final and final in a single edition of a FIFA World Cup tournament on the way to picking up the Golden Ball at Qatar 2022.

Kylian Mbappé may have seen his France side lose to Messi’s Argentina in the 2022 World Cup final, but his eight goals were enough to see him collect the 2022 FIFA World Cup Golden Boot – no player had scored this many goals at a single men’s World Cup tournament since Ronaldo for Brazil in 2002 (eight).

Scoring goals is what Mbappé does for fun. No player scored more often across top five European league players in all competitions within 2022 than he did (44), while his non-penalty goals per 90 ratio of 0.96 far exceeded his non-penalty xG average of 0.69 per 90.

His major threat comes from his ability to charge at opponents with the ball at his feet, with his 68 shots from ball carries in all competitions more than any other top five European League player in 2022.

With Messi and Mbappé occupying the wide forward positions, we need a lethal central striker in our FIFA 23 TOTY. Erling Haaland was strongly considered, while Harry Kane and Karim Benzema were in with a shout, but in the end, we opted for Barcelona hitman Robert Lewandowski.

Lewandowski has managed to convert his lethal goalscoring record from the German Bundesliga to the Spanish top-flight, with 18 goals in 20 appearances before the new year for Barcelona – more than any other La Liga player in all competitions.

Of top five European league players, only Mbappé has scored more goals (44) and non-penalty goals (39) than Lewandowski has in 2022 (38 and 34), with much of his success coming from his ability to find excellent goalscoring positions. No top five Euro league player has posted a better non-penalty xG per 90 rate than the Pole in 2022 (0.82).

Lewandowski finally scored a World Cup goal, with his first strike coming in Poland’s 2-0 group stage win over Saudi Arabia in Qatar. He ended the tournament with two goals, following a penalty in the last-16 defeat to France.

We’ve selected our XI from the 100-man FIFA 23 Team of the Year shortlist, now you can have your say.