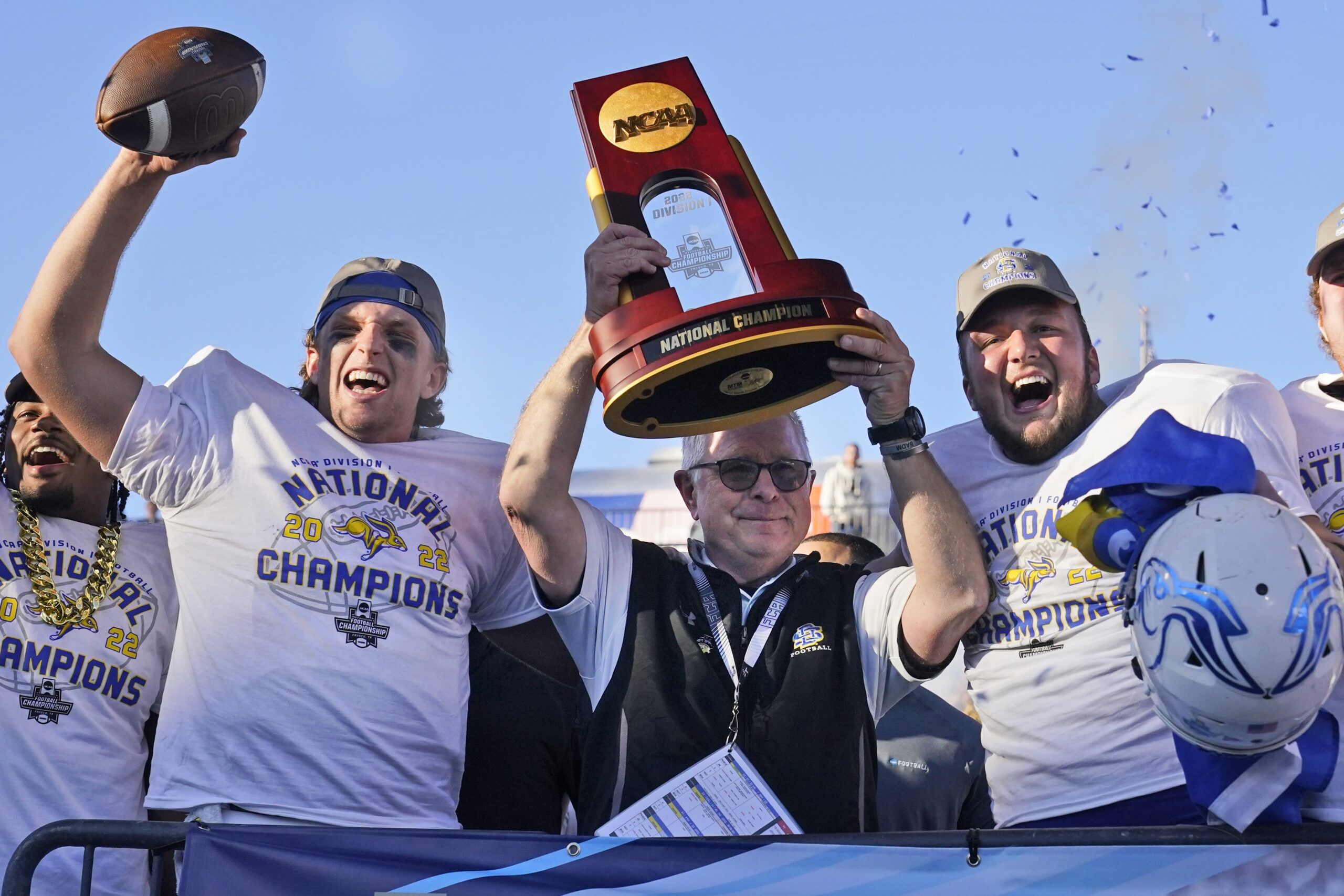 Nonetheless, how it happened on Sunday was improbable.

The Jackrabbits captured the first Division I national title in school history, handling the Bison dynasty 45-21 at Toyota Stadium in Frisco, Texas.

Entering the rivalry matchup, North Dakota State had been 9-0 in title games since 2011.

”It’s really a storybook ending for us,” said SDSU quarterback Mark Gronowski, who was voted the game’s most outstanding player.

Following is a review of SDSU’s decisive victory:

The Jackrabbits needed a second-half rally to win the regular-season matchup, but they were hopping offensively from the start of the championship game. They scored on six of their first seven possessions to build a 38-14 lead early in the third quarter (with a 417-186 advantage in yards at that point) and turn the second half anti-climactic.

Gronowski gained extra satisfaction in directing the dominating offense and earning top individual honors. Knocked out early by injury in the Jackrabbits’ previous appearance in the FCS championship game (spring 2021 season), he accounted for 280 yards of total offensive and four touchdowns (three passing, one rushing).

Outside linebacker Jason Freeman helped anchor SDSU’s mauling defense, matching his season high with 10 tackles (eight solos) and helping the Jackrabbits to a 3-0 turnover margin with a fourth-quarter interception.

1. There was great camaraderie in the all-Missouri Valley Football Conference matchup. Yes, seriously. It may be an intense rivalry, but the respect for each other’s program was evident, and many were thrilled for SDSU’s highly respected coach John Stiegelmeier, who capped his 26th season by receiving the Eddie Robinson Award Saturday night before winning his first national championship a day later.

2. Time of possession rules among these rivals: SDSU’s four-minute advantage marked the 20th straight meeting in which the winning team won the statistical category. It helped to have 283 rushing yards, with Amar Johnson (126 yards, touchdown) and Isaiah Davis (103, TD) both going over the century mark.

3. NDSU’s defense seemed to be backpedaling while SDSU built its big lead, and offensive coordinator Zach Lujan played a big part with the Jackrabbits’ play-calling. On one third down in the second quarter, Gronowski took a snap out of a shot gun, moved toward the line of scrimmage, then lofted a short pass over a drawn-in defense, connecting for a 44-yard touchdown to tight end Michael Morgan.

4. Injuries to key players impacted NDSU throughout the season. That the Bison allowed 523 yards to SDSU after giving up 539 to UIW in a semifinal reflected the wearing down over a challenging season. They had given up 500+ yards only four other times in a 256-game D-I history.

5. The best team won. SDSU lost by only four points at Iowa to open the season, then went on a program-record 14-game winning streak. The Jackrabbits had been knocking on the door of their first national title, so beating the Bison twice this season to increase their winning streak in the 114-game series to four proved they were ready to be national champions.

Light up the scoreboard. The Jackrabbits’ 45 points were the most in the final since Appalachian State had 49 against Delaware in 2007. Their 31 first-half points were the most allowed by NDSU since a 2002 game on the Division II level, and no team had scored at least 45 against the Bison since Sam Houston had 48 in a 2009 game.

SDSU was successful on seven of its first eight third-down conversion attempts, finishing 9 of 14 overall.

NDSU’s famed run of 39 straight wins after open weeks in the regular season or postseason came to an end. The streak stretched to 2005.

With loaded returning lineups, these FCS powers figure to be the top-ranked teams entering the 2023 season. The Dakota Marker trophy will be at stake on Nov. 4 when SDSU hosts NDSU.

It may not be their only meeting.