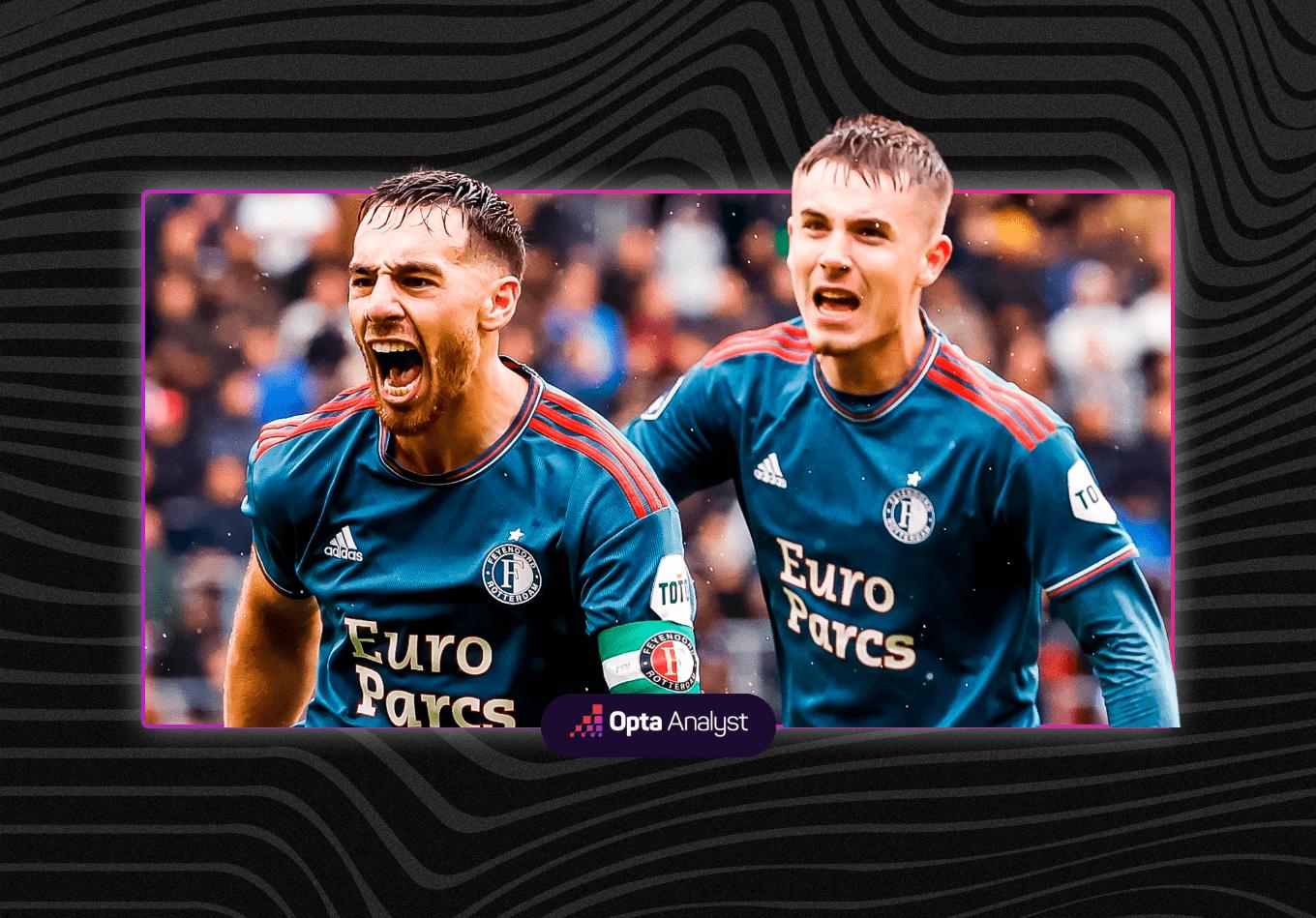 The Dutch Eredivisie restarts on Friday night, so there’s no better time to recap the key data stories in the Dutch top-flight this season via our experts at OptaJohan.

Press to Impress: The Feyenoord Style

Feyenoord currently lead the Eredivisie over pre-season favourites Ajax and PSV Eindhoven. Their strong 2022-23 campaign so far confirms that their European exploits last season were no flash in the pan.

Despite only having four players that started last season’s UEFA Europa Conference League final defeat to Roma still at the club, Feyenoord’s aspirations of topping the Dutch league this season felt questionable. Even more so when you consider that the pair held 10-point (PSV) and 12-point (Ajax) advantages over the Rotterdam club in the 2021-22 table.

Despite this, they’ve proved many wrong so far, as their 33-point tally this season in the Eredivisie is three more than their two rivals (both on 30 points).

Much of their impressive European campaign last season came thanks to their high intensity press and attractive, offensive playing style. It’ll comes as no surprise that coach Arne Slot is repeating that successful style across the domestic league campaign so far this season.

Playing in the opposition half with the highest average start distance of open play sequences (45.4m from their own goal), they’ve pressed their opponents and made the most high turnovers of possession in the Eredivisie in 2022-23 (173). Of those, 33 have ended in shots and nine have been converted into goals – both Eredivisie highs this season so far.

Feyenoord last started a calendar year top of the Eredivisie table back in 2017, when they last clinched the Dutch league title. An omen for 2023?

Is Ajax’s Time as Champions Coming to an End?

Ajax have won the last three Eredivisie titles and were even top of the league when Covid-19 stalled and eventually postponed the 2019-20 campaign. The 2021-22 league triumph came with a lower point tally than the other two (83) but was still impressive nonetheless.

The 2022-23 season has been much more difficult, but arguably very understandable considering the huge overhaul on and off the pitch. Losing head coach Erik ten Hag to Manchester United and their director of football Marc Overmars were big enough blows, but to lose important players like Antony, Lisandro Martínez, Sébastien Haller, Ryan Gravenberch and Noussair Mazraoui made it even more chaotic.

Before the break for the 2022 World Cup, Ajax suffered a poor run of form: losing to PSV and drawing with the more unfancied Vitesse and FC Emmen. As it stands, after 14 matchdays, they trail Feyenoord by three points, while newcomers Steven Bergwijn, Brian Brobbey, Calvin Bassey, Owen Wijndal and Jorge Sánchez haven’t fully convinced yet.

Their xG performance both in attack and defence is very similar across this season and last, in fact, their 0.9 xG against per game is exactly the same as it was in 2021-22. However, where they have increased their goals per game output slightly (by 0.2), they have conceded twice as many goals as last season on average (1.2 vs. 0.6).

Last season saw Ajax become the ‘clean sheet machine’ with 22 in their title-winning Eredivisie campaign – just one less than the national record held by both PSV and FC Twente (23) in a single top-flight season.

Goalkeeper Remko Pasveer was inspired last season after coming into the side. His goals prevented rate of 2.1 – meaning for every goal he conceded, the quality of shots on target faced would have seen the average goalkeeper concede 2.1 goals – was the best in the Eredivisie. So far in 2022-23, that rate is at 0.92, meaning that he’s conceded more often from shots on target faced than expected.

The Amsterdam side are currently on a dramatic streak of 13 consecutive games in all competitions without a clean sheet, their longest run since 1985.

There are other concerns for Ajax, too. Their pressing is less active, with their high turnovers per game falling from 12.3 last season to 9.9 this season, while they allow their opponents one more pass on average before making a defensive action this season compared to 2021-22 (10.0 vs. 9.0).

With the Klassieker against Feyenoord coming up on 22 January, Ajax will be looking to improve their form in time.

The New Xavi: Time to Step Up

It came as little surprise, but after impressing at the 2022 World Cup for the Netherlands, Cody Gakpo secured his big move from PSV to Liverpool, leaving the Eindhoven side with a huge hole up front – and not just because of his 6-foot-4 stature.

The 23-year-old has been vital for PSV this season, as not only the Eredivisie top scorer (nine goals) and assist leader (12) going into the winter break, but also the player with the most shots (51), chances created (59) and successful crosses (52) in the competition.

Dazzling numbers from Gakpo, and the question remains how PSV can stay competitive during the business end of the season without him.

Despite PSV undoubtedly planning to use some of that incoming money to sign a new attacking talent, the answer might already be right under their noses. After choosing playing time over the Paris Saint-Germain bench last summer, Xavi Simons quickly earned a place in the PSV starting line-up and after a string of fine performances, was also handed his national team debut at the World Cup.

Simons started with six goals in his first four Eredivisie games, making him the youngest player in Eredivisie history with as many goals from his first four games. In total, Simons tallied eight goals and three assists in 14 Eredivisie games for PSV this season. He has won the second-most duels this campaign (92) behind Sparta’s Tobias Lauritsen (154) and has been fouled more often than any other player (35), with opponents often unable to deal with his quick feet.

Although Simons is not yet able to reach Gakpo’s goal and assist tallies, he does have underlying numbers that rival the Liverpool-bound attacker. Simons was involved in 78 open play attacking sequences, just one fewer than Gakpo. With the latter being PSV’s chief of set pieces, Simons offers a more balanced palette of sequence types: he attempted 30 shots but was involved in almost as many build-ups to attempts. Making Simons the main creative output of PSV might lead to the team offering up more diverse attacking styles going forward.

Simons has been used in multiple positions under PSV manager Ruud van Nistelrooy: he played as a striker during Luuk de Jong’s absence and has been deployed on the wing but his favoured position seems to be as an attacking midfielder.

With PSV looking to complete the puzzle with a new winger and Luuk de Jong returning from injury, Simons excelling from behind the striker might just be the way PSV can put up a proper title fight.

The Eredivisie is usually a competition where players have their breakthrough at a very young age, with the likes of Arjen Robben, Christian Eriksen and Matthijs de Ligt all regular starters as teenagers.

It’s not often that you’ll see a revelation in the competition as a 24-year-old, but AZ’s Tijjani Reijnders is showing that patience could lead to a breakthrough at this age.

Considering that AZ are a team outside of the traditional ‘big three’ in the Netherlands – albeit one of the next strongest – it’s not rare to see their best young talents move elsewhere in the search for silverware. Across the last few seasons, we’ve seen players like Myron Boadu (Monaco), Teun Koopmeiners (Atalanta) and Owen Wijndal (Ajax) depart the club for this reason. However, AZ have always managed to find adequate replacements.

Reijnders joined the club from PEC Zwolle in 2017 and after almost a century of matches for their reserve team in the second tier of Dutch league football, a short loan spell at RKC and two seasons of settling for cameos from the bench for the first team, 2022-23 is the first season he’s been a regular starter at AZ. With his performances so far this season, many have been wondering why it’s taken so long.

No Eredivisie player has been involved in as many open play sequences leading to a shot as he has (105), while the balance in the midfield alongside the more defensive-minded Jordy Clasie and the attacking Dani de Wit has been a perfect trio for AZ.

Although Reijnders is not the most offensive midfielder for the Alkmaar side, he has the sixth highest tally of shots in the Eredivisie 2022-23 (39), coupled with creating the fourth most chances from open play (26). He brings defensive intelligence as well, with just two players making more interceptions in this Dutch top-flight campaign than Reijnders (27).

But Reijnders is not just bringing the ball closer to the opposition goal with his passing game, he likes to carry the ball as well, as no midfielder made as many progressive carries as Reijnders this Eredivisie season (122). The plain stats of scoring just two goals and providing three assists might not highlight Reijnders as a productive player, but his 3.2 xG total and 4.3 xA tally suggest he was not the luckiest player in the end. If Reijnders keeps his numbers up like this, the inevitable step to a bigger club like his predecessors will surely come.

Seasoned manager Ron Jans took on the job as head coach of FC Twente in the summer of 2020. But it wasn’t an easy task at first, with Jans proclaiming that “the team has just eight players and four goalkeepers” after arriving at the club.

Two and half years later, FC Twente are one of the most impressive teams in the competition: they currently rank fifth in the Eredivisie table, after finishing fourth last season and qualifying for the European play-offs. How did Jans manage to change the fortunes of the Tukker side?

For starters, the 64-year-old brought along plenty of experience in managing Eredivisie teams. Of all the current managers in the Dutch top-flight, he coached by far the most games in the competition and currently ranks fourth in most games managed in Eredivisie history (550).

It seems that it’s in defence that FC Twente have profited the most from Jans’ approach. Since the beginning of last season, only Ajax (26) had kept more clean sheets in the Eredivisie than the Enschede side (20 – level with Feyenoord), while in this campaign they have the best defensive record, conceding just nine goals after 14 league games.

Jans created a cohesive unit of players who know each other very well with a healthy mix of experience and hungry youngsters.

Much of their successive has come from consistency. Overall, there have been just four different defensive combinations at FC Twente this season, only two teams had fewer combinations across the whole league.

In Jans’ formation, the full-back players are also a big part of Twente’s attack. Of all the defenders in the league this season, right-back Brenet is the player with the most touches in the opposition box (37), while left back Smal is the defender with the most chances created from open play (22). Additionally, only Vitesse’s Maximilian Wittek (six) has more goals and assists this season among defenders than the two FC Twente fullbacks (both five).

The most impressive FC Twente player is the one between the sticks, both in terms of appearance and shot-stopping abilities. Lars Unnerstall is vital for their impressive defensive record: standing tall at just under 6-foot-5, the goalkeeper has prevented the most Eredivisie goals since the start of last season (10.7) – three more than Andries Noppert (7.7).