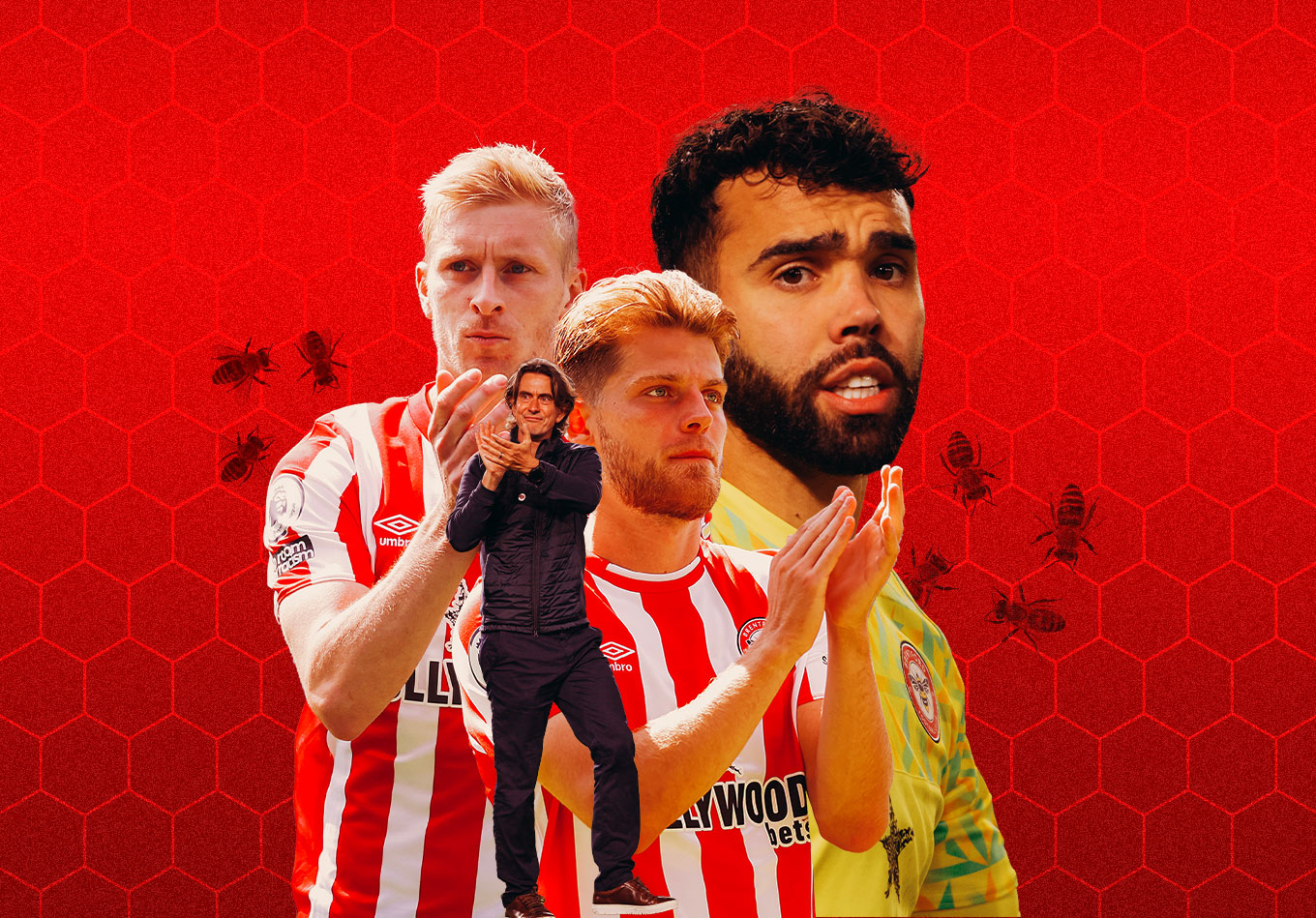 Plenty of Buzz: How Brentford’s Astonishing Record Continues to Sting the Big Boys

It’s almost 10 years to the day since Brentford, then of League One, held Chelsea to a 2-2 draw in the fourth round of the FA Cup. They’d even twice led at their characterful old Griffin Park home. The Bees’ run ended as they lost the replay 4-0 at Stamford Bridge – where they’d lose another fourth-round tie by the same scoreline four years later, this time as a Championship team.

Less than five years after that, though, Brentford and Chelsea met as equals for the first time since 1947. The Blues may have won 1-0 in the Premier League at the Gtech Community Stadium, but the Bees battered their West London neighbours that evening in a sign of things to come.

In the reverse fixture last April, Brentford fell behind at Stamford Bridge – then went and won 4-1 to record one of the biggest results in their history.

It would be quite the exaggeration to suggest that there’s been any kind of lasting power shift in the West London footballing sphere over the past nine months, but Bees fans are currently buzzing with good reason: halfway through their second season back in the top-flight (following a 74-year absence), Brentford sit eighth, one point above Chelsea (who, for all their struggles this season, still have a squad reportedly worth over £600m more than Brentford’s).

Thomas Frank’s side made it three league wins on the spin and seven unbeaten (W4 D3) by beating Bournemouth 2-0 on Saturday. In fact, only a rejuvenated Manchester United have picked up more points from their last five matches (15) than Brentford’s 13.

“The job is to keep being better, year on year,” explained Brentford director of football Phil Giles in September. Well, compared to the same stage last term, Brentford are better – six points better, to be precise.

The Bees have conceded two more goals than they did during their first 19 matches of 2021-22, but they’ve scored significantly more: 1.68 per game compared to 1.21 per game (they finished last season with 48 goals at an average of 1.26 per game). And they largely owe their improved attacking output to a continuously improving Ivan Toney, who surpassed his 2021-22 Premier League tally by putting Brentford ahead from the spot against Bournemouth (“the best penalty taker in the world” according to Frank, Toney – with his almost alarmingly composed run-up stroll-up – has only ever missed one out of 27 penalties in his career).

Only Erling Haaland (21) and Harry Kane (15) have more Premier League goals to their name in 2022-23 than Toney (13, of which nine have been non-penalty). The 26-year-old has scored in all four of his league appearances since missing out on England’s 2022 World Cup squad, netting five goals in total, including a brace which clinched an historic victory at Manchester City in Brentford’s final match prior to the World Cup break.

Less than three years ago, Toney was playing against the likes of Accrington Stanley and Fleetwood Town in League One with Peterborough United. This season, he’s averaging 0.53 non-penalty goals per 90 in the best league in the world. He’s also one of only nine current Premier League players to average 0.50 goals per 90 or higher since the start of 2021-22 – and one of only six to score 20 or more goals during the same period (along with Haaland, Kane, Mohamed Salah, Son Heung-Min and Wilfried Zaha).

It’s been a long road for Toney – he didn’t make his first top-flight start until the age of 25 after two brief substitute appearances for Newcastle as a 19-year-old – but Brentford are benefitting from his brilliance as he approaches the approximate peak of a striker (he turns 27 in March).

However, Brentford might soon have to do without their main man: Toney is currently being investigated by the FA in relation to alleged betting breaches, having initially been charged in November. While he’s free to play in the meantime, he could be hit with a ban lengthy enough for him to miss the rest of the season. Brentford have managed to get by without Toney on occasion – they’ve drawn three and won three of the eight Premier League games he’s missed, including the recent 3-1 victory over Liverpool – but the fact is he’s accounted for 39.6% of their league goals since signing. They’re unlikely to find an instantly effective like-for-like replacement in January – of course, they’ll be hoping that it doesn’t come to that.

In defeating Liverpool, Brentford once again showcased their sizeable set-piece threat, opening the scoring from a corner through Ibrahima Konaté’s own goal, before seeing Yoane Wissa’s scrambled finish from the same scenario ruled out for offside. The Bees have notched eight goals from non-penalty dead-ball situations this season – the fourth-most in the Premier League behind Tottenham (10), Liverpool and Fulham (both nine) – while only Newcastle have created more from them (10.1 xG to Brentford’s 8.2).

Brentford’s set-piece success shouldn’t come as a surprise: the Bees appointed their first set-piece coach – Gianni Vio, who’s now at Spurs – in 2015, six years before they were even promoted from the Championship. They’ve kept things relatively tight at the other end too, giving up the Premier League’s eighth lowest xG this season (4.87), with the relatively high seven goals they’ve conceded from dead-ball situations seemingly more due to strong opposition finishing.

Saturday’s win over Bournemouth not only saw Brentford record three straight Premier League victories for the second time, but it also amazingly it means that they’ve still not lost a game they’ve led in the competition.

In fact, the Bees haven’t lost a match in league competition (including play-offs) in which they’ve taken the lead at any point for almost two years (2-1 versus QPR on 17 February 2021) – a streak of 39 matches across the Championship (12) and the Premier League (27). Following Manchester United’s derby comeback against Manchester City, Liverpool (42 games) are the only other team not to lose a Premier League game after leading since the start of last season.

It’s an extraordinary statistic – and Brentford have won 20 of those 27 Premier League matches they’ve led (13/17 last season and 7/10 this season). Only six of the 17 ever-present teams in the Premier League since 2021-22 have dropped fewer points from winning positions than the Bees’ 14: five of the ‘big six’ – Arsenal (13), Liverpool (12, including two in a 3-3 draw at Brentford last season), Manchester City, Manchester United (both 11), Spurs (nine) – and Brighton (11). Only four such sides have dropped fewer points from winning positions at home: Spurs, Arsenal (both five), City and United (both four).

Brentford’s immense knack for closing out games is made all the more remarkable by the fact they’ve led seven of their first 18 games against the ‘big six’. Of the eight promoted teams to survive their first season (back) in the Premier League across the past five campaigns – the others being Newcastle, Brighton, Huddersfield Town, Wolves, Sheffield United, Aston Villa and Leeds – only Wolves (21) have taken more points from their first three games against each of the ‘big six’ than Brentford’s 18.

The Bees have frequentlystung the big boys, beating them all once apart from Spurs (who they’ve drawn twice with) – including, surely still most memorably of all, their very first Premier League match: a 2-0 home win over Arsenal in the 2021-22 curtain-raiser.

Three of those five victories have come this term: 4-0 at home to Manchester United, 2-1 away to Manchester City and 3-1 at home to Liverpool. Brentford will get the chance to complete the set when they make the short trip to Spurs on the penultimate weekend of the season; while they also travel to Arsenal, United, Chelsea and Liverpool between now and then.

They won’t earn too many style points from the absolute purists, but Brentford provide entertainment aplenty with an aggressive and – quite evidently – successful brand of direct football. From their ‘no d**kheads’ policy to their Moneyball-esque recruitment strategy, they continue to carve a path that’s distinctly their own to becoming an established top-flight club.

Any worries that Brentford would succumb to ‘second season syndrome’ (a fairly common affliction, albeit one which rarely results in relegation) should have dissipated by now. It was only 15 years ago that they finished in the bottom half of League Two, one place below Bury.

As they enter the second half of 2022-23, trailing fifth-placed Spurs by just four points, there must be a sense that European qualification (which a seventh-place finish might be enough to secure) is something less than fantasy.