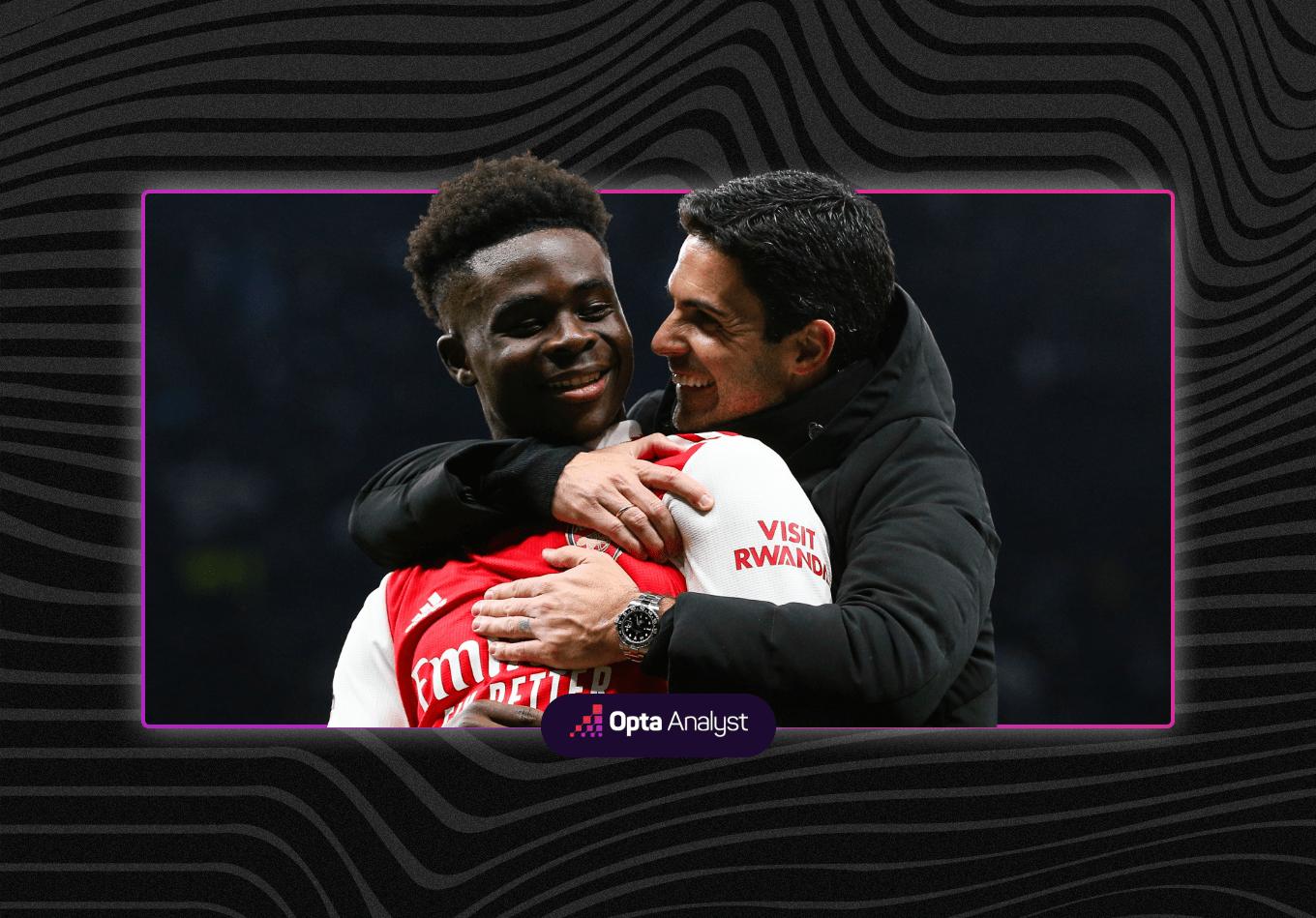 After a full-bloodied weekend of Premier League derby action, our supercomputer now has Arsenal as favourites to win the Premier League.

A massive win in the north London derby took Mikel Arteta’s side eight points clear at the top of the table, and the model now estimates their probability of going on to clinch their first title since 2003-04 at 51.4%.

Manchester City, who suffered a body blow in the Manchester derby against United, have slipped down to 45.4%. This is the first time since the season began that Pep Guardiola’s side are no longer the supercomputer’s favourites to win the title.

And that flip in the favourites is for good reason. Arsenal’s eight-point lead over City is their biggest lead in the competition when playing the same number of games as the side below them since the final day of the 2003-04 season, when they won the title by 11 points.

Furthermore, the Gunners’ 47 points from 18 Premier League games this season is the most points they’ve won at this stage of a campaign in their league history.

Despite heading into the World Cup break on the back of a 2-1 defeat against Brentford, our supercomputer still had Manchester City as strong favourites for the title, giving them a 75% chance of winning as games restarted on Boxing Day 2022.

Back then, Arsenal’s lead over City was five points. But Arteta’s men are unbeaten since the resumption of club football while City dropped valuable points in a drab 1-1 draw against Everton and have looked sluggish and vulnerable in two consecutive defeats in all competitions against Southampton and Manchester United.

Man City failed to attempt a single shot on target in their midweek EFL Cup loss at Southampton – the first time since April 2018 that this has happened in a competitive match, while they only had one shot on target against the Red Devils on Saturday, their joint-fewest in a Premier League match under Guardiola (also one vs. Stoke in March 2017, and one vs. Southampton in September 2021).

Arsenal fans have remained cautious about their title chances this season, but even the most pessimistic among them may be starting to dream after Sunday’s result. It was an excellent attacking performance, particularly in the first half, but was underlined with a grit and determination not often associated with Arsenal in recent years. Aaron Ramsdale and his back four were magnificent at repelling the waves of Spurs attacks that came in the first 15 minutes of the second half.

The win marked Arsenal’s first league double over Tottenham since the 2013-14 campaign, with the Gunners winning away at Spurs for the first time in the league since March 2014.

The task at hand doesn’t get any easier for Arsenal however as they welcome Manchester United to the Emirates next weekend. Erik ten Hag’s side have won nine consecutive matches in all competitions – their longest run since a run of nine between December and January in 2016-17 under José Mourinho – and will have title aspirations of their own, despite the supercomputer currently rating that possibility at just 2.7%.

Our model has Arsenal as comfortable favourites for that tie at 43.7%, and it’s one they’ll be keen to win as Manchester City look to bounce back against Wolves.

Overcome United in that one and, well, those dreams may be starting to become reality.