What Should the Broncos Do About Their Russell Wilson Problem? | The Analyst 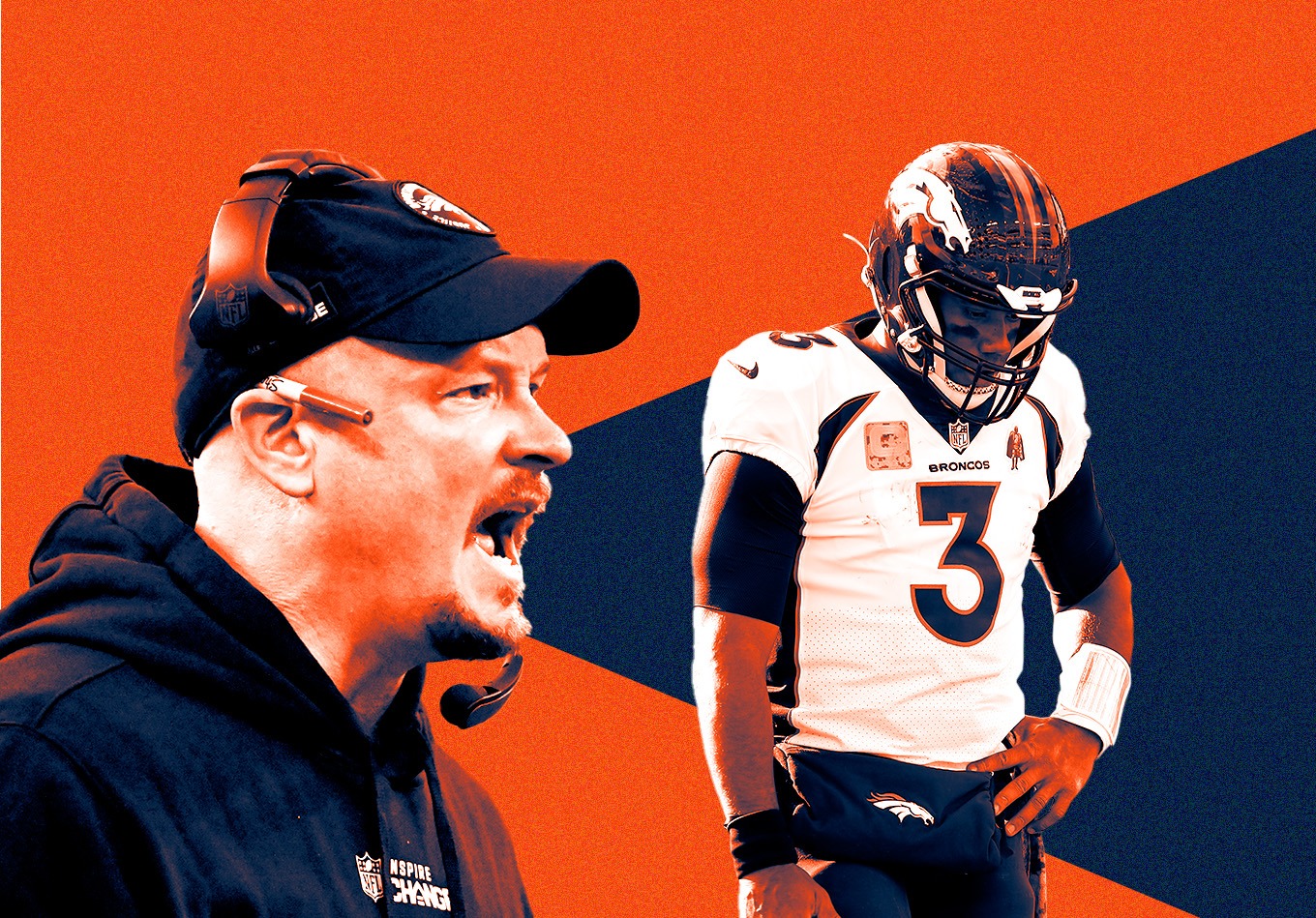 What Should the Broncos Do About Their Russell Wilson Problem?

Nathaniel Hackett, Russell Wilson and the Denver Broncos left little choice for new ownership to make a drastic change after Sunday’s embarrassing 51-14 loss to the Los Angeles Rams in a national window on Christmas Day.

After trading a package that included two first-round picks, two second-round picks and three players for Wilson then extending him on a five-year, $245 million deal with $165 million guaranteed and $124 million guaranteed at signing this offseason, the Broncos lost to a Rams team missing the majority of its best players and quarterbacked by Baker Mayfield.

So, the Broncos’ new ownership fired Hackett. And while Hackett wasn’t all to blame for the Broncos’ deficiencies this season as he began his head coaching career 4-11, it was an ugly tenure that started out with the inexplicable decision to kick a 64-yard field goal in a Week 1 loss to the Seattle Seahawks and ended with teammates fighting on the sideline in a loss to a team that had effectively given up on the season weeks prior.

There’s no real use in lessening Hackett’s blame for Denver ranking 28th in offensive EVE and 27th in passing EVE this season, but he also lacked the ability to bench his quarterback for two reasons:

Denver almost certainly must try this all again with Wilson and a new head coach in 2023 despite how poorly the QB has played so far this season. Wilson is 21st in passing EVE, 23rd in well-thrown percentage and 17th in pickable pass percentage among QBs with at least 200 attempts.

As recently as two years ago, Wilson was still one of the best quarterbacks in the NFL. His 2021 campaign and relative struggles were largely written off because of a broken finger from which he rushed back onto the field.

But he’s been even less productive this season with just 3,020 passing yards, 12 touchdowns and nine interceptions despite an offensive cast that includes wide receivers Courtland Sutton and Jerry Jeudy and tight end Greg Dulcich.

If the Broncos were to release Wilson without any designation this offseason, he would account for $107 million in dead cap and subtract $85 million from Denver’s salary cap next season. Considering the Broncos only are set to have $16 million in salary cap space, per OverTheCap.com, that’s a nearly impossible proposition. The Broncos would need to cut a quarter of their roster to get under the cap if they cut Wilson.

Releasing Wilson with a post-June 1 designation is slightly more feasible since it would spread out that dead cap and only subtract $17 million from the Broncos’ salary cap. By doing that, the Broncos would incur dead cap in 2024, as well, however. That $107M in dead cap would just be spread out over two years – $39 million in 2023 and $68 million in 2024.

Still, taking on $107 million in total dead cap while giving up four Day 1 and 2 picks including a 2023 first-rounder currently set to be the No. 3 overall pick is undoubtedly worse than just keeping Wilson and hoping he improves under a new head coach and offensive coordinator. The Broncos would still need to pay Wilson his salary, but keeping him and benching him all season would actually be better from a salary cap perspective.

This has been a season from hell for Denver, which lost wide receiver Tim Patrick during training camp to a torn ACL, running back Javonte Williams in Week 4 to a severe knee injury and left tackle Garrett Bolles in Week 5 to a broken leg. With those players back in the mix next season, Wilson should be better in 2023.

The Broncos’ offense never got to play up to its fullest potential without Patrick in 2022. And then the offense didn’t truly have the ability to rebound after losing Williams and Bolles. Wilson should have been better, but losing a starting wide receiver, running back and left tackle would impact any quarterback, especially one playing in a new system.

The safest play for the Broncos, led by CEO Greg Penner in their search for new leadership, would be to find a head coach who would bring in an offensive coordinator who had former success with Wilson. Ex-Seahawks offensive coordinator Brian Schottenheimer, who’s currently a coaching analyst for the Dallas Cowboys, has been a popular candidate among reporters.

Wilson has not been described by people within the Seahawks’ organization as the easiest player to mesh with, which makes a reunion with Schottenheimer seem unlikely on the surface. But Schottenheimer already looks better for what he accomplished with Wilson between 2018-20 based on how the QB has performed the past two seasons. If he could turn Wilson’s career around and help lead the Broncos to a productive offense in 2023, then he could potentially re-enter the head coaching interview circuit after 2023.

The Broncos do own a 2023 first-round pick from when they traded edge defender Bradley Chubb to the Miami Dolphins, so they could trade for former New Orleans Saints head coach Sean Payton, though he would have to believe he could fix and want to work with Wilson. The other current betting favorites to be hired as the Broncos’ next head coach include current Cowboys defensive coordinator Dan Quinn, former Indianapolis Colts and Detroit Lions head coach Jim Caldwell and current Philadelphia Eagles offensive coordinator Shane Steichen, who has had success with another mobile quarterback in Jalen Hurts this season. Wilson has lost a step as he enters his mid-30s, so it’s not guaranteed that Steichen could find similar success as he has with Hurts.

There has been some question about whether the Denver job is an attractive one since a new head coach would be tied to Wilson. That’s fair. But a new head coach also could use Wilson as a scapegoat. If Wilson can’t rebound in 2023, then he could be let go much easier during the 2024 offseason before his 2025 salary becomes fully guaranteed.

Another way out would be to trade Wilson before exercising his 2023 option of $20 million. Given how poorly Wilson has played this season, it seems unlikely a team would take on his contract unless Denver gave up even more draft capital just to ship him out of town.

One season down, the Wilson acquisition looks like an outright disaster for the Broncos. Denver has lacked consistency at quarterback since Peyton Manning retired following the 2015 season, and Wilson was expected to provide it. Now, we’re examining potential outs to a $245 million contract. And while the Walton-Penner ownership group wasn’t in charge when general manager George Paton was hired, when Hackett was hired or when Wilson was acquired via trade, they did OK the QB’s five-year contract extension before the season began.

The Broncos’ struggles have also set up the Seahawks for future success without Wilson. After a hot start, the 7-8 Seahawks have lost five of their last six games, but they also have a young roster and will be able to add even more talent to it with the Broncos’ pick and their own first-rounder. Seattle is currently slated to pick third and 12th overall in the 2023 NFL Draft.

They could stay put or move up to take their own quarterback of the future. Or they could continue to fill in other key roles on their roster while rolling with Geno Smith at quarterback. Smith currently leads the NFL in well-thrown percentage and ranks higher than Wilson in catchable percentage and passing EVE.

If the Broncos really want to part ways with Wilson this offseason, they could figure it out with a trade or post-June 1 cut. But the most likely scenario is that Wilson is back at quarterback in 2023 in another new system as Denver hopes it didn’t make the worst trade in NFL history.

And since Penner is leading the search for a new head coach, it seems likely that Paton’s job will be tied to Wilson’s success, and the next drastic change within the organization could mean a firing and a release.