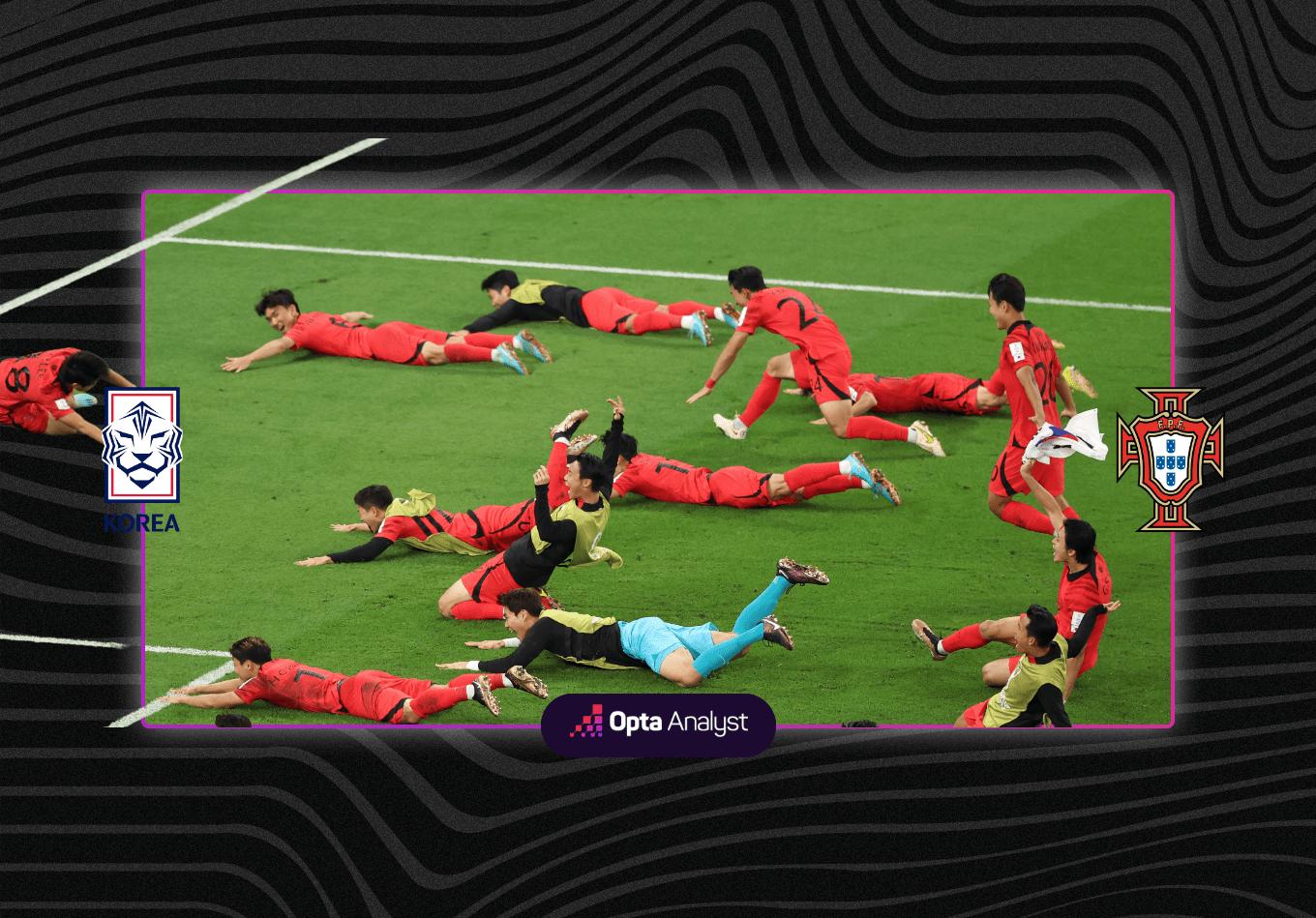 A late winner for South Korea from Hwang Hee-Chan was enough to see them progress from Group F at the expense of Uruguay, qualifying over them on goals scored. It is yet another shock in a World Cup group stage full of them.

This result looked miles off after five minutes when Portugal went a goal up. Starting fast seems to be the Portuguese way – since their first-ever World Cup appearance in 1966, they have scored more goals in the first five minutes of World Cup matches than any other nation (6). Today was no different. A raking long ball over the top of the South Korean defence from Pepe saw Diogo Dalot sprint onto the ball, drive into the box and square for Ricardo Horta to score on his World Cup debut. Horta is the third player to score on his World Cup debut for Portugal at this edition (also João Félix and Rafael Leão), their most at a single World Cup. The future of this Portugal squad seems bright.

But back to the present. Fast starts aren’t usually the South Korean way. Prior to today, they’d never scored a first-half World Cup goal, with their previous 10 tournament strikes all coming in the second period. Kim Young-Gwon ended that record, however, sweeping in from a corner that Portugal failed to clear, with Cristiano Ronaldo inadvertently teeing him up, the ball striking the forward and falling neatly into Young-Gwon’s path.

It was one element of a frustrating night for Ronaldo, who today became the first European player ever to make 20+ appearances in both the World Cup (20) and European Championships (25). He was caught offside three times, more than any other player, and failed to hit the target with his two shots. His chase for Eusebio’s goal record of nine will have to wait until the last 16. By now we need no more reminders that Ronaldo has never scored in the World Cup knockout stages. Will his moment finally come?

As usual, Portugal’s two full-backs were heavily involved in their play. João Cancelo (109) had more touches than anyone else on the pitch, while Dalot’s 79 were the third-highest, as the pair looked to exploit a narrow South Korean back four.

But Korea resisted and the moment of the game came in stoppage time. An attacking corner from Portugal broke loose and led to a great counter-attacking opportunity for South Korea, with Son carrying the ball and driving at the heart of the Portuguese defence. His inch-perfect ball slipped through Hwang Hee-Chan who tucked the ball neatly under Diogo Costa. They may not be fast starters, but they are strong finishers: four of South Korea’s last seven World Cup goals have been scored in the 90th minute.

For Portugal, they’ve finally lost a World Cup after scoring the first goal (P19 W15 D3 L1) for the first time in their history.

For South Korea, well, it’s bedlam. The last time they qualified for the last 16 of a World Cup was back in 2010. They were eliminated at that stage by Uruguay. How the tables turn.