The Viz: The Pittsburgh Steelers vs. Baltimore Ravens Through Time | The Analyst 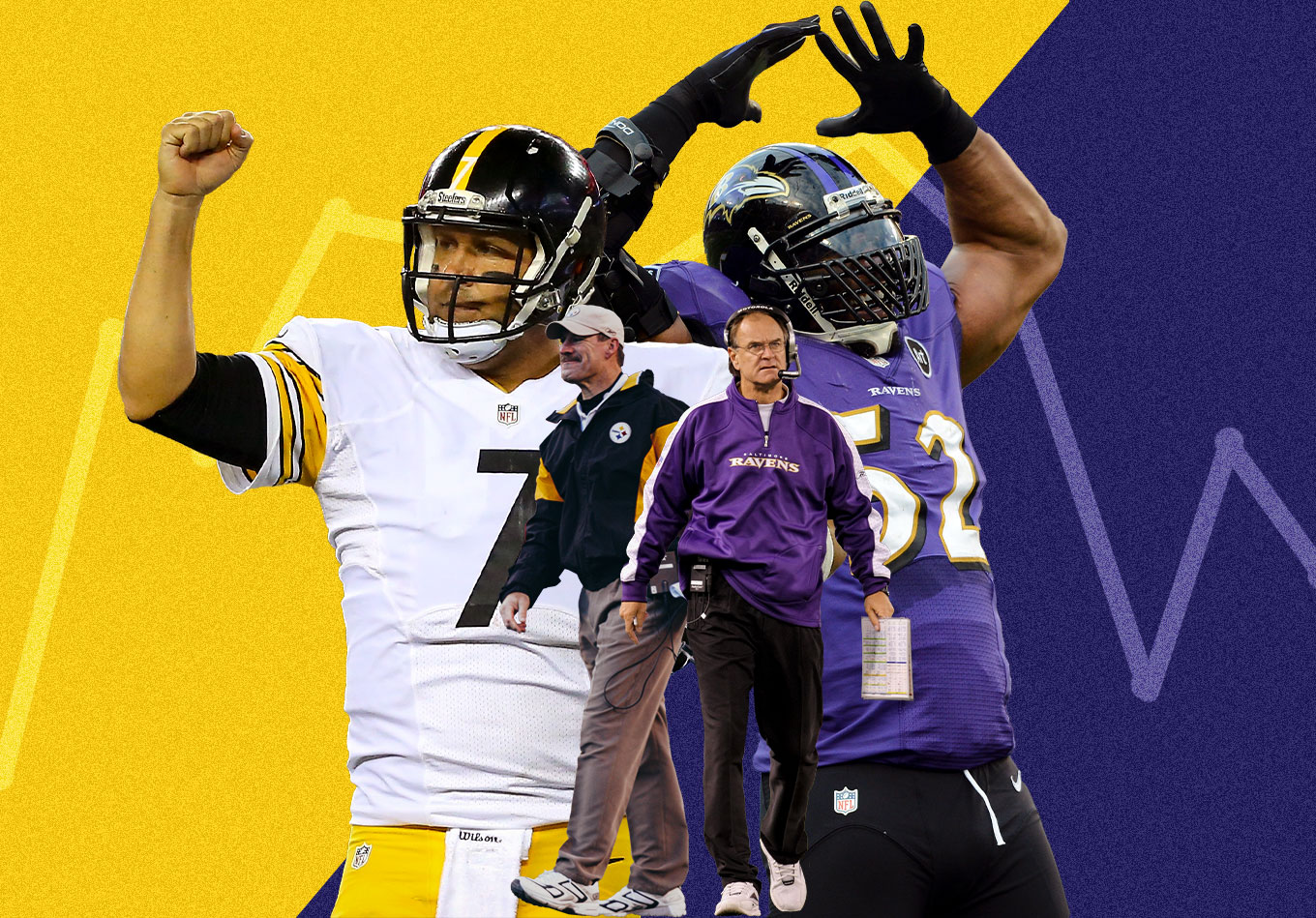 The Viz: The Pittsburgh Steelers vs. Baltimore Ravens Through Time

The Steelers-Ravens rivalry isn’t that old (circa 1996), but it quickly soared to one of the fiercest in the NFL. Telling the story comprehensively would still take volumes, so we took a crack at showing it with fewer words and more data viz ahead of another meeting in this heated rivalry.

“Sometimes guys get hit so hard, you don’t know if they’re going to get up.”

Hines Ward’s quote after the Pittsburgh Steelers’ 23-14 win over the Baltimore Ravens in the 2008 AFC championship game could have come from any Steelers-Ravens game since Art Modell uprooted the Browns from Cleveland in 1996.

Instead, it came after a game that many remember as one of the most violent contests in recent NFL history. Willis McGahee, who scored both Ravens touchdowns, may not remember it that way – or any other way – thanks to a fourth-quarter hit from Ryan Clark.

Clark suffered a concussion. So did McGahee, who – as Ward alluded to – didn’t get up. The two-time Pro Bowler lay flat on his back for more than six minutes after the hit before being immobilized and carted off on a board.

Clark looked like he attempted to lead with his shoulder but clearly made helmet-to-helmet contact with McGahee on that infamous play from January 2009. Tom Junod chronicled McGahee’s and Clark’s journeys of playing through pain and injuries in a 2013 Esquire article that was meant to detail the NFL’s penchant for acceptable violence.

Instead, it serves as practically a written embodiment of what Ravens-Steelers has meant over the years to a league that has publicly attempted to curtail head injuries but would privately froth at the mouth over a current rivalry as intense as this one was in the mid-2000s.

“Everything that fans want to see out of a rivalry is in this game,” Ravens linebacker Terrell Suggs said before the teams played in Week 1 in 2011. “The hatred between the two teams, the physicality … I think it’s the best rivalry in sports.”

Ward and Suggs constantly jawing at each other before, during, and after the two (or three) times a year they played is one of the lasting images of these teams at the height of their hatred. Suggs, who will likely be a Hall of Famer once eligible in 2025, was as colorful a chronicler of the rivalry as any, once saying of Ben Roethlisberger, “God can have his soul. His ass belongs to me.”

They’ve met 56 times – including four in the playoffs – since the Ravens arrived in Baltimore, part expansion team and part bitter old rival from the AFC Central glory days of Browns-Steelers.

Since 2008, only Mike Tomlin and John Harbaugh have coached in this series. Seventeen NFL teams have changed coaches since 2021, yet the Steelers and Ravens have been out here with the same sideline leaders since the days of George W. Bush.

As they head into another meeting, let’s take a look at a rivalry that’s been as vicious and tightly contested as any other over the past quarter century.

The Steelers won 11 of the first 15 in this rivalry, ranging from Mike Tomczak’s lone season as the primary starter under center in the Steel City to the days of Kordell Stewart and Tommy Maddox.

All those – along with seven more matchups through 2006 – came with Bill Cowher’s jaw roaming the sidelines for Pittsburgh, while the Ravens’ initial head coach after heading east was Ted Marchibroda. He gave way to Brian Billick in 1999, and the man whose record-breaking offense powered the 1998 Minnesota Vikings would waste no time helping put together a dominant unit on the other side of the ball.

Billick’s 2000 Ravens defense was arguably the best in NFL history. Led by Ray Lewis, Rod Woodson, Tony Siragusa and Chris McAlister, Baltimore gave up a record-low 165 points in 16 games, including just nine in two meetings against the Steelers (they split those games, with Pittsburgh’s 9-6 Week 9 win in Maryland marking the Ravens’ final loss of the season).

As dominant as the 2000 Ravens were, there would be only one more playoff victory under Billick following the team’s dominant 34-7 win over the New York Giants in Super Bowl XXXV.

Struggling to win the big one was Cowher’s Achilles heel in Pittsburgh – the Steelers had a first-round bye seven times during his 15-year helm but went just 1-4 in AFC championship games at home. It took a six seed and three road games for Cowher’s club to finally get over the top in the 2005 season, beating Seattle for the franchise’s then-fifth Super Bowl win.

As usual, the rivalry was close despite Baltimore’s down 6-10 season. The Steelers and Ravens each won at home – Pittsburgh’s coming 20-19 in Week 8 followed by a Baltimore 16-13 overtime victory in Week 11.

Cowher hung on for one more season and Billick two, but their successors are still going. Tomlin’s introduction to the rivalry in 2007 was a resounding win – a 38-7 walloping in Week 9 that saw Roethlisberger throw five touchdown passes and the Ravens finish with a franchise record-low 104 total yards. Billick and Baltimore got revenge in the final week of the regular season, beating a Steelers team that had clinched the AFC North and was resting many regulars 27-21. A day later, he was fired.

John Harbaugh wasn’t necessarily even the hottest head coaching commodity in the family in 2008 – younger brother Jim was in the early stages of turning Stanford into a Pac-12 powerhouse – but he quickly righted the Ravens’ ship.

John’s first season in Baltimore began a string of five consecutive runs to the playoffs, with the Ravens winning at least 10 games in four of those.

Twenty points is all that has separated the Steelers and Ravens in their 52 regular-season meetings, with Pittsburgh winning 29 of those.

The New England Patriots were still the AFC’s dominant regular season team when Harbaugh and Tomlin stepped onto the scene, but from 2008-12 it was the Ravens and Steelers who were trading haymakers slightly under the radar while Tom Brady of the New England Patriots and Peyton Manning of the Indianapolis Colts stole most of the spotlight.

Baltimore went 54-26 in that five-season stretch, just a win better than the 53-27 Steelers. Of the 10 regular-season meetings between the AFC North rivals, eight were decided by exactly three points and one other by four.

Home-field advantage hasn’t been that significant in this rivalry on the whole – Pittsburgh is 16-10 at home and 13-13 on the road – but it was when No. 7 was under center for the black and gold. Roethlisberger went 11-3 against the Ravens at home in the regular season, with the Steelers averaging 24 points. In Baltimore, Big Ben went 6-7 with Pittsburgh putting up a hair over 15 points per game.

These have been the NFL’s two stingiest rushing defenses since the Ravens came on the scene. Baltimore has allowed 3.66 rushing yards per attempt since 1996 and Pittsburgh 3.89. The Ravens have had just 12 100-yard rushers against the Steelers, while Pittsburgh has had 11 against Baltimore.

Even since that incredible stretch of games decided by a field goal during the height of the rivalry, this series has been tight. Since 2013, the Steelers have won 10 to Baltimore’s eight, though they’ve been outscored 391-388.

Pittsburgh has a four-game winning streak in the series, coming out on top by a total of 13 points despite its generally excellent run defense being gashed. But the Ravens’ 750 yards on the ground – an average of 5.51 yards per carry – hasn’t been enough to overcome 10 turnovers in that stretch. It should be noted that 2019 NFL MVP Lamar Jackson has only played in one of the meetings in each of the last three seasons.

Those two Steelers season sweeps gave them seven in the series. Baltimore has four, and they’ve split 16 times.

The Steelers and Ravens have met four times in the postseason, all in Pittsburgh.

The 2001 divisional round wasn’t much of a contest. The Steelers held Baltimore to just 150 total yards, and the Ravens’ lone score in a 27-10 loss to Kordell Stewart and company came on a Jermaine Lewis 88-yard punt return.

The next two meetings wound up being catapults to the Super Bowl for the Steelers. They got there directly after the 2008 AFC title game win that saw McGahee’s brutal exit. The Ravens couldn’t crack the 200-yard mark in that playoff game, either, yet they had a chance to steal it down 16-14 with under five minutes left.

Troy Polamalu had other ideas. Rookie Joe Flacco’s third interception of the day wound up in Polamalu’s hands, and the Hall of Famer took it 40 yards to the house to set off a celebration of the first and only three-game sweep in the rivalry.

If you thought the Ravens’ offensive futility hadn’t yet hit a low point against the Steelers in big games, the 2010 divisional round proved otherwise. Pittsburgh held Baltimore to 126 yards in that one, but it was the Ravens who took a 21-7 lead to the locker room at halftime on the strength of a defensive touchdown and another short field set up by a Steelers turnover.

Baltimore fell apart from there. Harbaugh’s team had 28 total yards in the second half and three turnovers, and running back Rashard Mendenhall’s two-yard touchdown with 1:33 left gave Pittsburgh a 31-24 win.

Flacco finally got some revenge in a 2014 wild card game. He threw for 259 yards and two TDs, while the Ravens intercepted Roethlisberger twice in a 30-17 win. The second pick, courtesy of Suggs, ended all hopes of a Steelers comeback in the fourth quarter and lives on in Baltimore lore as the “ThighMaster” interception.

It could take time for this rivalry to get back to the blood feud it was in the not-too-distant past, but as long as Harbaugh and Tomlin are wearing headsets, it’s hard to imagine the Ravens-Steelers rivalry as anything but a tightly contested two-game slugfest each fall full of trash talk, key turnovers and – just maybe – a little gamesmanship.