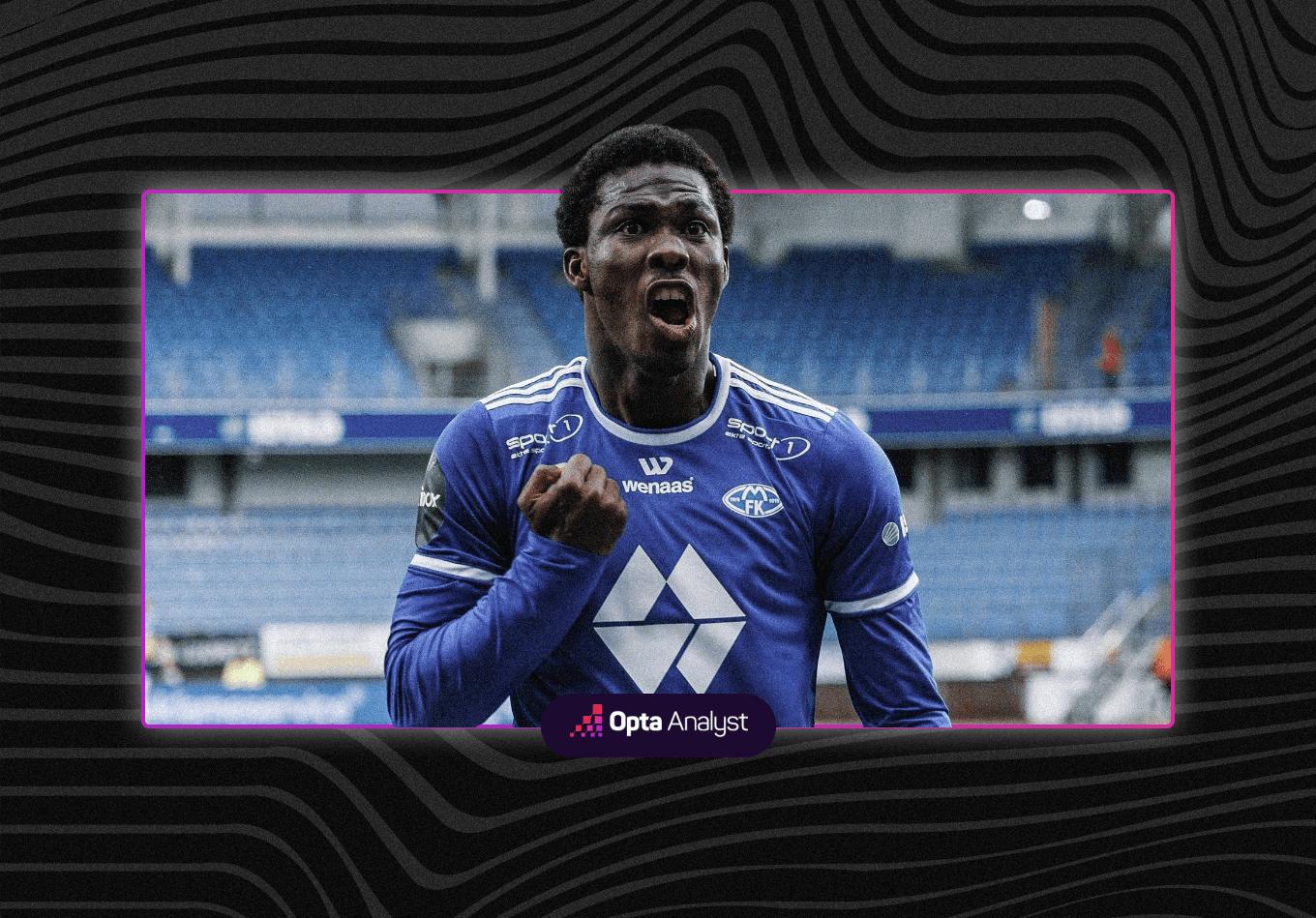 With the 2022 Eliteserien season in the books, our esteemed team of Opta data editors look back at the major talking points from the campaign.

With 26 championship titles, Rosenborg are considered the most successful team in Norway, and with their recent results in Europe, Bodø/Glimt have been perhaps the most eye-catching team from the Nordics in recent years. But there’s an argument that Molde have been the most consistent. In each of the last six seasons, they’ve finished in the top two and this season were crowned champions by 18 points.

Molde had an average start to the season with two wins, a draw and two losses in their first five matches. In the following 25 games, they picked up a remarkable 71 points from the 75 on offer, in a run that included 17 consecutive wins to finish the season. Since the introduction of the single top-tier in 1963, no team had ever managed to win more than 11 games in a row in the competition (Lillestrøm in 1986), and Molde comprehensively blew past that record in 2022.

But it was at the back where Molde came to the fore. They faced fewer shots on target than Bodø (96 to 109) and even if a shot did make it through, Molde could trust in their goalkeeper Jacob Karlstrøm, who saved 75% of the shots on target he faced, the best rate in the league. Including his stand-in Oliver Petersen, who played four games, Molde had two of the top three goalkeepers for save percentage in the league.

Up front, Molde boast a whole range of dangerous players. Nine different Molde players finished the season with at least eight goals or assists. The standout though, was David Datro Fofana,who finished as the club’s top scorer with 15 goals. The Ivorian only recently turned 20, and started in just 19 of Molde’s 30 league games. Despite that, only two players scored more goals in the Eliteserien last season, while no other teenager scored more than five goals in the league.

As mentioned before, Molde weren’t the most dominant team in the Eliteserien when it came to having long spells of possession. Instead, they relied on transitions, being direct with the ball after regaining possession. Molde topped the league for direct attacks – open-play sequences that started inside their own half, had at least 50% of their movement towards the opposition’s goal and ended in a shot or a touch in the opposition box – and scored the most goals from such situations in 2022. It proved to be a successful tactic that saw Molde claim the Norwegian league title for the first time since 2019.

No Three-Peat for Bodø/Glimt

If you’ve heard anything about Norwegian club football over the past few years, the chances are that you’ve heard about Bodø/Glimt.

Glimt, the fairytale club situated in the arctic circle, won two consecutive league titles shortly after their promotion in 2017. They reached the quarter-finals of the UEFA Conference League in 2021-22, in a campaign that saw them inflict the heaviest defeat in José Mourinho’s career, beating Roma 6-1 in the group stage

2022 was not to be for them, though, finishing runners-up to Molde, despite having what appeared to be superior attacking metrics. As the saying goes, getting to the top is hard, but staying there is even harder.

Bodø/Glimt have experienced first-hand just how ruthless football can be when you’re a not-so-wealthy club from a small league like the Eliteserien. In recent years, they’ve made some record profits from transfers like Jens Petter Hauge (AC Milan), Erik Botheim (Krasnodar), Patrick Berg (RC Lens) and Victor Boniface (Union SG). Even this year, after a ‘disappointing’ second place, Bodø will have to look for replacements after losing winger Ola Solbakken to AS Roma.

How sustainable is success if you have to replace your best players after every transfer window?

But back to this season. Bodø/Glimt attempted 582 shots (almost 20 a game), at least 119 more than any other team in the Eliteserien 2022, and outscored every team in the league. More often than not, such attacking output is enough to win you the league.

The fact that they didn’t win the league then, must surely mean they were defensively suspect? Well, not exactly.

But despite facing the fewest shots per game, they conceded 41 goals, while champions Molde conceded just 25 goals from more attempts (336).

Molde’s opponents scored with 7% of their shots in the 2022 season, while Bodø/Glimt’s opponents converted their chances at a rate of 13%. The underlying numbers show that when they did concede shots, Bodø/Glimt conceded high-quality shots. Their expected goals per shot conceded was 0.10, the seventh worst in the league, while Molde’s 0.9 was good enough for third-best.

When Bodø/Glimt did win, they did so in style. 12 of their victories came with them scoring four goals or more.

But in the end, Glimt lost the title by dropping too many points, and five of their six defeats saw the winning side score 3+ goals.

For Bodø/Glimt, next season’s challenge is clear: keep their prolific attack, while becoming more stable in defense.

Casper Tengstedt: The Arctic Fox in the Box

Finding the new Erling Haaland is probably the holy grail for every big team in the world right now. Although Haaland might be a once-in-a-generation striker, maybe scouts don’t have to look further than the Eliteserien again to find the next goalscoring machine.

After netting 15 goals for AC Horsens in the Danish second-tier in 2021-22, 22-year-old Casper Tengstedt moved to Rosenborg in the summer. His Eliteserien career started off magnificently: a goal in his debut game against HamKam was followed by a hat-trick at Sandefjord. Tengstedt finished the season with 15 league goals, more than any other player over this period.

It wasn’t just goals though: the Danish striker also assisted six goals and created 17 chances from open play. His tally of 21 goals and assists is an Eliteserien-high since his debut on 6 August.

It’s no surprise that teams from bigger leagues are already eying the Danish forward. Can Tengstedt cut it in a bigger league? In his first half year the striker scored a goal every 80 minutes. Next season will be a true rest for the young striker, either in Norway or elsewhere. Will he be able to sustain his current minutes-per-goal rate and continue putting up Eliteserien numbers that Erling Haaland would recognise?

For the first time since 2019 Rosenborg finished inside the top three of the Eliteserien, securing themselves a ticket for the Conference League qualification stages in the process. It was an impressive campaign in a league dominated by Molde and Bodø/Glimt, but they maybe deserved more. At home, Rosenborg almost went the entire season unbeaten. They only lost their last game of the season at home, in an extra-time thriller against Sarpsborg 08.

But the team from Trondheim simply dropped too many points away from home to really compete at the top of the table. While they collected 38 points at Lerkendal Stadium, they only secured 18 points in away games.

Where did it go wrong for Rosenborg away from home? It’s not like they didn’t score enough (31 goals in 15 games), but they really struggled to hold onto leads. They went ahead in 11 of their 15 away games but went on to win only four of these matches. In total, Rosenborg lost 17 points from winning positions away from home, the most of all teams in the league in 2022.  Their game against Tromsø was a prime example: fighting back from 2-0 to lead 3-2, in the first half, only to eventually lost 4-3 in extra time.

One reason for this could be the inexperience of their young squad. Rosenborg had the second-youngest average starting line-up (24y and 299d) in Norway’s top-flight in 2022.

With a tenth place in 2022 after finished 11th in 2021 and ninth in 2020, it was a par season for Haugesund in the Eliteserien. But one player made it a remarkable campaign for the Seagulls: their reliance on 19-year-old Christos Zafeiris. With his all-round contribution and workload, arguably no other player had a bigger influence on their team last Eliteserien season than the central midfielder. Born in Athens but raised in Norway, Zafeiris attempted the most shots (56), created the most chances (42) and played more passes in the opposition half (828) than any other Haugesund player.

Indeed, Zafeiris was involved in more attacking sequences than any other Haugesund player.

But his importance stretched further than just attacking power. In the whole 2022 Eliteserien season, just three players won possession more often than Zafeiris (208), while he was also fourth when it comes to attempted tackles (74). Employed as part of Haugesund’s press, Zafeiris, also won back possession 26 times in the final third, the second-highest number of any player. It’s rare to see such a prolific combination of both attacking and defensive prowess.

Despite his young age, Zafeiris started 29 of 30 games for Haugesund last campaign, playing a total of 2536 minutes, more than any other teenager in the competition.

Haugesund have already put their trust in the youngster, who is one to watch in the Norwegian league for next year.