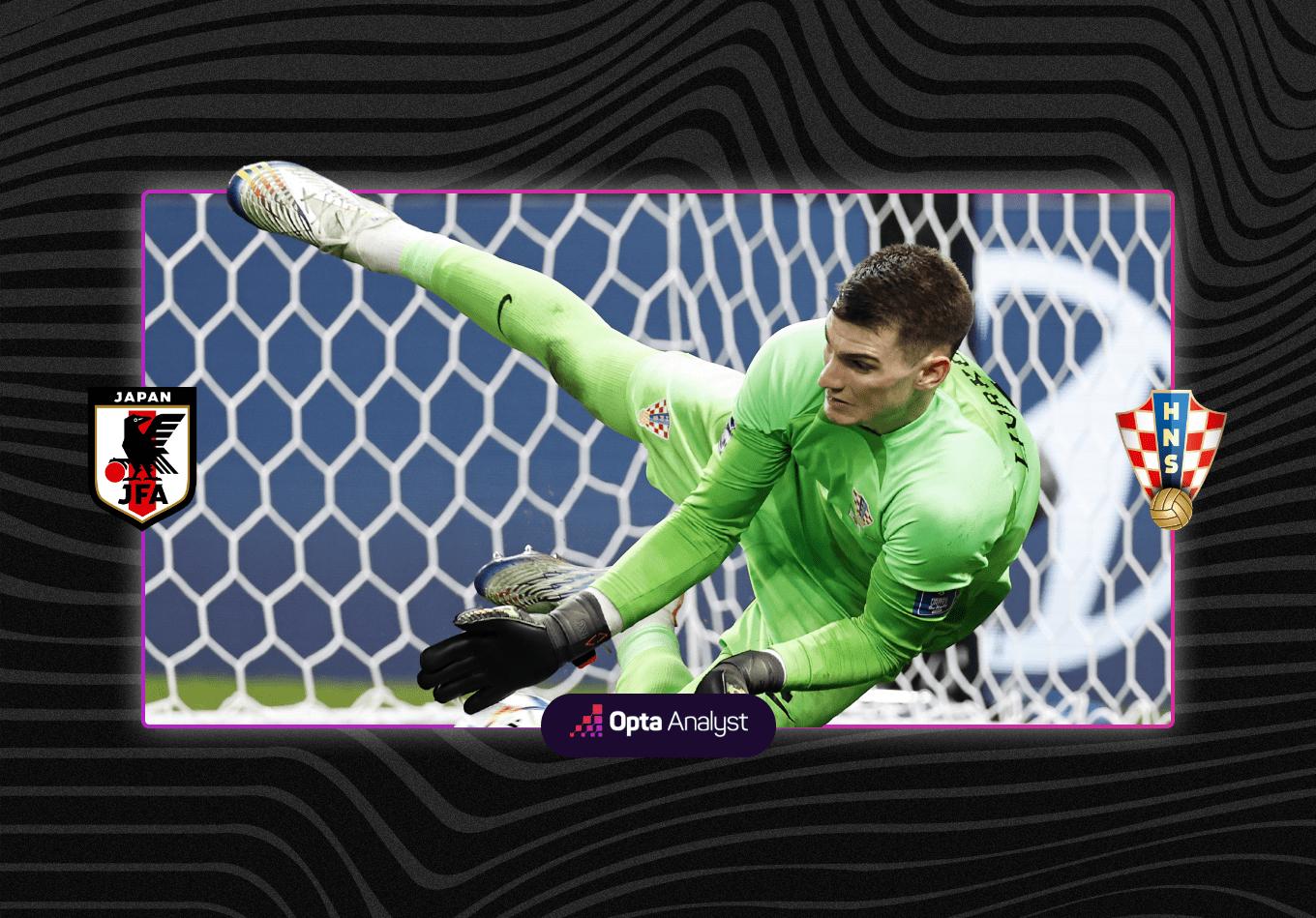 Croatia – the extra-time specialists – once again prevailed after going the distance against Japan in this round of 16 clash. Seven of Croatia’s last eight knockout matches at major tournaments have gone to extra time, with the only exception in that run the 2018 World Cup final versus France. Croatian keeper Dominik Livaković was the hero, saving three of Japan’s four spot kicks. The Japanese takers did make life easy for him though, with three poor attempts.

That’s now three consecutive World Cup penalty shootout victories for Croatia, whose experience ultimately told in the pressure moments. Only Germany (4/4) have a better 100% winning rate in penalty shootouts at the World Cup.

Japan started the game a lot brighter and threatened well before their first shot of the game came. Daizen Maeda – who was a livewire upfront all game – had two great opportunities in the first 20 minutes that won’t show up on the stats sheet. The first, an outstretched leg that just couldn’t reach a ball whipped across the face of the box by the electric Junya Ito. The second, he failed to get his head on a cross from the left.

Japan’s crosses into the box looked threatening all game, via the dynamic Ito in particular. He delivered four crosses in the first half, with no player delivering more in that period, and looked dangerous whenever he got the ball down and ran at his left-back Borna Barišić. Japan attacking heavily down his side, as the below attacking thirds for the first half shows:

Ito plays for Ligue 1 club Reims, and his ability at dribbling with the ball is prolific. So far in France this season he’s made 25 carries with a take-on in Ligue 1 for Reims, which is the highest on their team.

It therefore made sense that Maeda got his goal from a cross. Ritsu Doan hooked in a ball from a short corner, Maya Yoshida kept it alive, and it fell to Maeda in the box to shoot home. It was Maeda’s first shot of the game, but it was just reward for his efforts. It was also Japan’s first shot on target in first half of World Cup 2022.

Croatia got back into the game out of nowhere. Dejan Lovren curled in a great cross that was met by a bullet header from Ivan Perišić. Just as crossing had looked a threat for Japan, it proved equally potent for Croatia. They were 45 attempted crosses in this game over the course of the first 90 minutes – only two matches this tournament have seen more.

This header was also his 10th goal at a major tournament for Croatia, overtaking Davor Šuker’s national team record of nine. His shot map below shows he’s certainly got an area he’s most dangerous from.

That goal gave Croatia the confidence they needed to assert themselves. From that point, they looked more comfortable in possession and were able to control the tempo of the game while the zest and verve slightly faded from Japan’s game.

They’ll meet either Brazil or South Korea in the quarter-final, with only hours left to find out which opponent it’ll be.