Value Reassessment: Who Is the Best Quarterback of the 2020 NFL Draft Class? | The Analyst 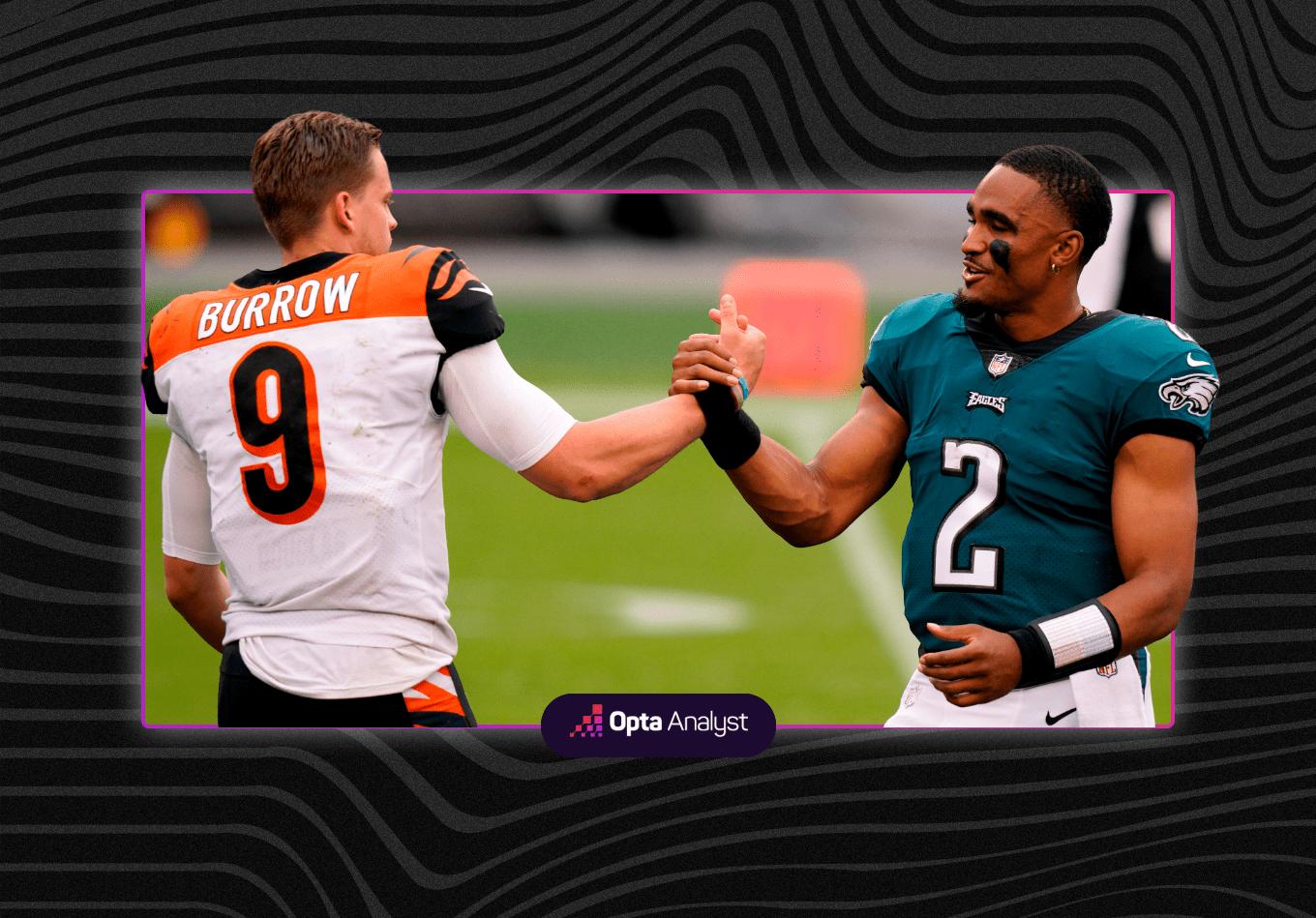 Value Reassessment: Who Is the Best Quarterback of the 2020 NFL Draft Class?

As recently as last season, there was serious debate about who was better between Cincinnati Bengals quarterback Joe Burrow and Los Angeles Chargers QB Justin Herbert. Burrow had led his team to a Super Bowl appearance, while Herbert was the player with better tools and a higher perceived upside.

Miami Dolphins quarterback Tua Tagovailoa and Philadelphia Eagles QB Jalen Hurts were largely afterthoughts. Tagovailoa was merely a middling starter with Brian Flores as head coach and while Hurts had begun his ascent, there were still questions about whether or not head coach Nick Sirianni and the Eagles would head into the 2022 season with Hurts as their quarterback or try to upgrade with one of the many veteran options available in the offseason.

Now the class is looking absolutely loaded 15 weeks into the 2022 NFL season with all four quarterbacks among the six favorites to win NFL MVP. Hurts is behind Kansas City Chiefs QB Patrick Mahomes at +325, Burrow sits behind Buffalo Bills QB Josh Allen at +800, Tagovailoa is at +12500 and Herbert sits at +20000.

If the season ended today, all four QBs would make the playoffs. But which quarterback has actually been the best this season?

Let’s go in order of when each QB was drafted.

For some reason, the Bengals were not a popular Super Bowl contender entering the 2022 season despite the fact that they were in the big game months prior. According to our model, Cincinnati’s projected win total was 8.2 in the preseason and they had a 0.7% probability of winning the Super Bowl.

At 10-4, the Bengals have already hit the over (and are projected to finish with 11.3 wins) and they now have a 1.4% probability of winning the Super Bowl. Burrow is having a fairly similar statistical season to his 2021 campaign, though there have been some significant differences in overall offensive approach.

The deep ball was a major strength of Burrow’s game last season, and he ranked fifth in passing attempts of 20-plus yards with 80 in 20 games, including the postseason. The 2021 No. 1 overall pick has just 40 deep attempts in 14 games this season despite having at least similar efficiency on those plays.

Much of the last two points about the team’s shift in approach has to do with getting the ball out of Burrow’s hands quicker behind an offensive line that ranks near the bottom of the league in matchup win percentage in pass protection. And 56.6% of the team’s pass plays are designed “quick” passes.

Burrow ranks third in well-thrown percentage this season and has the lowest pickable pass percentage. He’s 10th in passing EVE (Efficiency Versus Expected) and fifth in spread value, which represents how far a signal-caller is above or below the cumulative baseline in that period.

Last season, the LSU product was first in well-thrown percentage, had the seventh-lowest pickable pass percentage and was 11th in passing EVE. So while Burrow didn’t take a massive step forward this season, he’s continued to be one of the best and most efficient quarterbacks in the NFL.

The Bengals have the 12th-highest offensive EVE and ninth-highest passing EVE this season.

They still have an outside shot at the No. 1 seed in the AFC.

Tagovailoa took the biggest leap this season among the top quarterbacks from the 2020 NFL Draft class, and there’s no mystery why. He gained an offensive guru in head coach Mike McDaniel, a scheme that fits his skill set in the Shanahan offense and one of the NFL’s best and fastest wide receivers in Tyreek Hill.

It helps too that McDaniel and the offensive brain trust believe in Tagovailoa’s ability to test the defense by throwing deep to Hill and Jaylen Waddle.

The 8-6 Dolphins are third in offensive EVE and second in passing EVE this season. They have a 79.0% chance of making the postseason.

Herbert has been less efficient this season, but there are many excuses why he hasn’t taken a bigger leap in Year 3. Chief among them, he’s been without starting left tackle Rashawn Slater since Week 3, and starting wide receivers Keenan Allen and Mike Williams have missed a combined 11 games. Second-year pro Josh Palmer is currently Herbert’s leading receiver and journeyman wideout DeAndre Carter has accumulated 481 receiving yards.

Chargers offensive coordinator Joe Lombardi was already playing too conservatively with Herbert last season as the LA QB ranked 22nd in air yards at 7.71 yards per clip. That’s dropped down to 32nd this season at 6.48 yards. His well-thrown percentage ranks fourth – up from eighth in 2021 – and his pickable percentage is second – down from first in 2021 – this season.

Herbert has some of the best raw tools in the NFL – and he’s also incredibly accurate. It would make sense to open up the offense and allow him to throw more downfield. At the same time, Allen is not a field-stretcher and running back Austin Ekeler is one of the Chargers’ top passing targets. Williams’ return to health should allow Herbert to throw downfield at a higher clip.

The Chargers, who are 8-6 and currently the AFC’s sixth seed, rank just 27th in overall EVE, 23rd in offensive EVE and 18th in passing EVE.

Our metrics were already high on Hurts coming into the 2022 season. The 2020 second-round pick ranked fourth in passing EVE last season and is fifth this season. He’ll be missed this week if Gardner Minshew takes over as expected as Hurts deals with a sprained shoulder.

Minshew’s passing EVE (yards gained or lost over the expected amount) was minus-0.147 on 70 drop backs last season compared to Hurts’ mark of plus-0.914. The 13-1 Eagles’ offensive EVE and passing EVE both rank fourth this season, so they should be in good shape even with a significant downgrade to Minshew.

The Eagles need to win just one game over the final three weeks to earn the No. 1 seed and a first-round bye in the NFC playoffs as they’re set to face the Dallas Cowboys, New Orleans Saints and New York Giants. They have an NFL-best 64.6% chance of reaching the Super Bowl.

Hurts’ shoulder injury is unfortunate for a number of reasons, but mostly because it affects his chances of winning NFL MVP. His spread value ranks third among quarterbacks, and his well-thrown percentage is 13th. He has an 81.8 catchable percentage (sixth) and his pickable pass percentage is under the league average at 4.0%.

Add in Hurts’ rushing ability — he’s third among QBs in rushing yards and has the second-most rushing touchdowns of any player this season — and it’s easy to see why he’s considered one of the league’s most valuable players. With Hurts expected to be sidelined, our model gives the Cowboys a 59.0% win probability in this week’s showdown.

Hurts has also benefitted from improved coaching and playmakers since he entered the NFL. Sirianni is the favorite to win AP Coach of the Year and wide receiver A.J. Brown ranks third among qualified wide receivers in burn yards per route and fourth overall in receiving touchdowns.

HOW DO THEY RANK?

Based on skill set alone, Herbert probably has the highest upside of all of the quarterbacks taken in the 2020 NFL Draft, and he’d be the best player with which to start a franchise. He’s accurate, has the biggest arm, and he’s athletic.

But he’s also been hamstrung by injuries to top teammates and an offensive system that’s not set up to draw out his best qualities.

And if we’re going by what each quarterback has actually done on the field, then Burrow has probably been the best through three seasons. Since 2020, he has the highest well-thrown percentage in the league at 85.1%, ranks 15th in air yards and has the fourth-lowest pickable pass percentage.

And that’s probably the best way to rank how they’ve actually performed through three seasons: Burrow, Herbert, Hurts and Tagovailoa. But if all four players continue on their current career trajectory, then this clearly has a chance to be a historic draft class.

And all four players have a chance to be handsomely rewarded with new contracts this offseason.