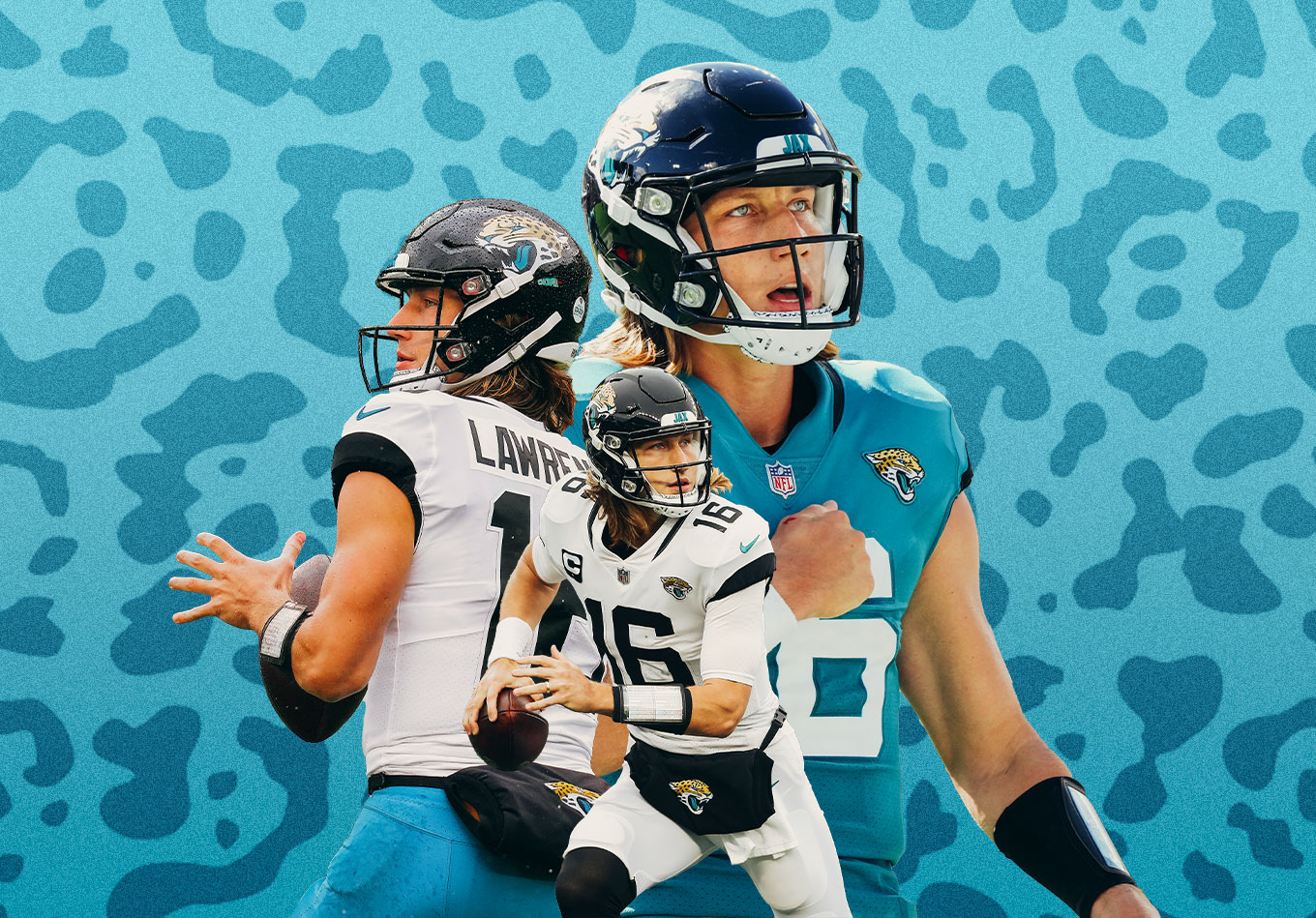 Victory laps aren’t typically run as a communal event, but the NFL as a whole from scouts to general managers, coaches and the media can start jogging now that it appears Jacksonville Jaguars quarterback Trevor Lawrence has ascended in Year 2.

But after being labeled a can’t-miss prospect starting in his freshman year at Clemson, it’s fair to say that Lawrence had a shaky start to his NFL career. Lawrence, along with most of his rookie quarterback class, ranked among the least efficient quarterbacks in 2021. He was also dealing with the circus that came with Urban Meyer as head coach and little in the way of offensive playmakers, so his rookie struggles were mostly and understandably hand-waved.

But then they continued into the 2022 season even after Jacksonville hired Doug Pederson as head coach and spent nearly $200 million in free agency. That was until a recent turn in performance that has Lawrence playing like an elite-level quarterback.

Through the first eight weeks of the season, Lawrence ranked 26th out of 35 qualified quarterbacks with a 77.4 well-thrown percentage, which measures how often quarterbacks make accurate, on-target throws. He had the 11th-worst pickable pass percentage (4.89) and ranked 18th in air yards (8.2). He was 21st in quarterback EVE (our Efficiency Versus Expected metric) in expected passing situations – so passing performance when the defense knows it is coming.

He did show glimmers of his potential early in the season, especially in Weeks 2 and 3 in wins over the Indianapolis Colts and Los Angeles Chargers. But he was also wildly inconsistent. In Week 4, he fumbled four times and threw an interception in a loss to the Philadelphia Eagles. He threw two interceptions and fumbled in a Week 8 loss to the Denver Broncos.

Something flipped in Week 9, however, and it’s not overly surprising that it took Lawrence until halfway through his second season to begin playing up to his potential. The 2021 first-overall pick has a new head coach in Pederson, a new offensive coordinator in Press Taylor and new pass catchers in wide receivers Christian Kirk and Zay Jones and tight end Evan Engram. Sometimes getting acquainted with new coaches and teammates takes time, and Lawrence is playing much more comfortably past the halfway point in the 2022 season.

Since Week 9, Lawrence has the NFL’s highest completion percentage, 10 touchdowns and no interceptions while setting himself apart from the rest of his rookie class. Chicago Bears quarterback and 2021 eighth-overall pick Justin Fields ranks 19th in QB EVE and New England Patriots quarterback and 2021 15th-overall pick Mac Jones is 23rd despite having the third-best well-thrown percentage (88.5) over that span.

That’s due in large part to Jones’ league-low 5.8 air yards in that span as he’s been handcuffed by an ultra-conservative offensive play-caller in former defensive guru Matt Patricia. Zach Wilson, Davis Mills (31st in QB EVE since Week 9) and Sam Ehlinger have all been benched. Trey Lance got hurt in Week 2.

Lawrence had the most complete skill set coming out of Clemson but lacked Fields’ athleticism and Jones’ pure accuracy. He also had the highest upside based on his arm talent and overall set of traits.

Fields, like Lawrence, has a new head coach in Matt Eberflus and offensive coordinator in Luke Getsy. His top pass catchers have had a more difficult time getting open against man and zone coverage compared to Kirk, Jones and Engram. Overall, Chicago pass catchers rank 28th in matchup win percentage, while Jacksonville’s are fifth.

Jones has the same head coach in Bill Belichick, but Josh McDaniels, his offensive coordinator in 2021, left to become the Las Vegas Raiders head coach. McDaniels was replaced by Patricia as offensive play-caller, and former New York Giants head coach/Patriots special-teams coordinator Joe Judge took over the quarterback room. Jones’ frustration with New England’s offense has appeared to boil over in recent weeks.

Lance lost offensive coordinator Mike McDaniel, who’s now the head coach of the Miami Dolphins. Lance’s play came with such a small sample size that it’s still difficult to truly assess his performance. Wilson lost neither his head coach nor offensive coordinator this season. Mike White, his current replacement, has been one of the NFL’s most efficient quarterbacks as a starter. Joe Flacco also ranks higher than Wilson in QB EVE.

Mills had a change at head coach with Lovie Smith replacing David Culley as head coach. Houston promoted passing game coordinator/quarterbacks coach Pep Hamilton to replace Tim Kelly as offensive coordinator. Mills was benched for Kyle Allen for two games but returned as a starter Sunday when he split reps with Jeff Driskel. Mills ranks higher than Allen in QB EVE but below Driskel (albeit in a small sample size).

It’s worth wondering whether Lawrence has taken a significant leap or if he’s just playing against easier defenses, however. The Jaguars have played the Las Vegas Raiders, Kansas City Chiefs, Baltimore Ravens, Detroit Lions and Tennessee Titans since Week 9. Kansas City’s defense ranks 12th in defensive EVE against the pass, while Tennessee is 20th, Baltimore is 23rd, Las Vegas is 30th and Detroit is 31st. Two of Lawrence’s least efficient games this season came against the top-ranked Broncos and the Eagles, who are fourth in pass defense EVE.

Lawrence’s next two games against the Dallas Cowboys (third in pass defense EVE) and the New York Jets (second) will be the best barometer of how far Lawrence has truly come. Overall this season, Lawrence ranks 23rd in QB EVE (dropbacks when he’s expected to pass). The Cowboys are second in pass defense EVE on dropbacks with an expected pass. The Jets are fourth.

The Cowboys and Jets are built differently, however. The strength of the Dallas defense is on the edge with pass rushers Micah Parsons and Demarcus Lawrence. The Jets’ biggest strength is in their interior pass rush with Quinnen Williams and at cornerback with Sauce Gardner, D.J. Reed and Michael Carter.

Lawrence struggled against pressure last season and into the first half of his second campaign, but that’s been a major area of growth for him. After posting a 64.3 well-thrown percentage when under pressure in Weeks 1-8, Lawrence ranks seventh in the league among those with at least 30 attempts with an 80.0% well-thrown rate versus pressure since Week 9.

The next two games aren’t only important for Lawrence as an individual player, but for the Jaguars as well. After dismantling the Tennessee Titans 36-22 on Sunday, Jacksonville is just two games out of first place in the AFC South at 5-8.

With games remaining against the Cowboys, Jets, Houston Texans and Titans in the NFL’s 26th most difficult remaining schedule, the Jaguars currently have an 18.2% chance of making the postseason. While it is unlikely, it’s not completely out of the realm of possibility that Lawrence and the Jaguars could make the playoffs if they continue their ascent over the final four weeks of the playoffs.

Tennessee has games remaining against the Los Angeles Chargers, Texans, Cowboys and Jaguars in the 24th most difficult schedule. If the Jaguars manage to go 2-1 over their final three games and the Titans go 1-2, then that Week 18 matchup between the two franchises would serve as a loser-stays-home game with the winner advancing to the playoffs.

Heading into the 2022 season, I polled people around the league to find out which second-year quarterback they believed would be the best by the end of the season. It’s not surprising that nearly everyone said Lawrence. No one had him ranked lower than two on their ballot. And at this moment, those folks are being proven correct. In that same poll, Jones ranked second, Lance third, Wilson fourth, Mills fifth and Fields sixth based largely on his supporting cast.

We’ve seen Lawrence and Fields ascend, Jones and Mills regress, Lance get injured and Wilson stay largely the same player. It will be worth revisiting how the 2021 QB class closed out the season after Week 18 with none of its members guaranteed postseason berths.