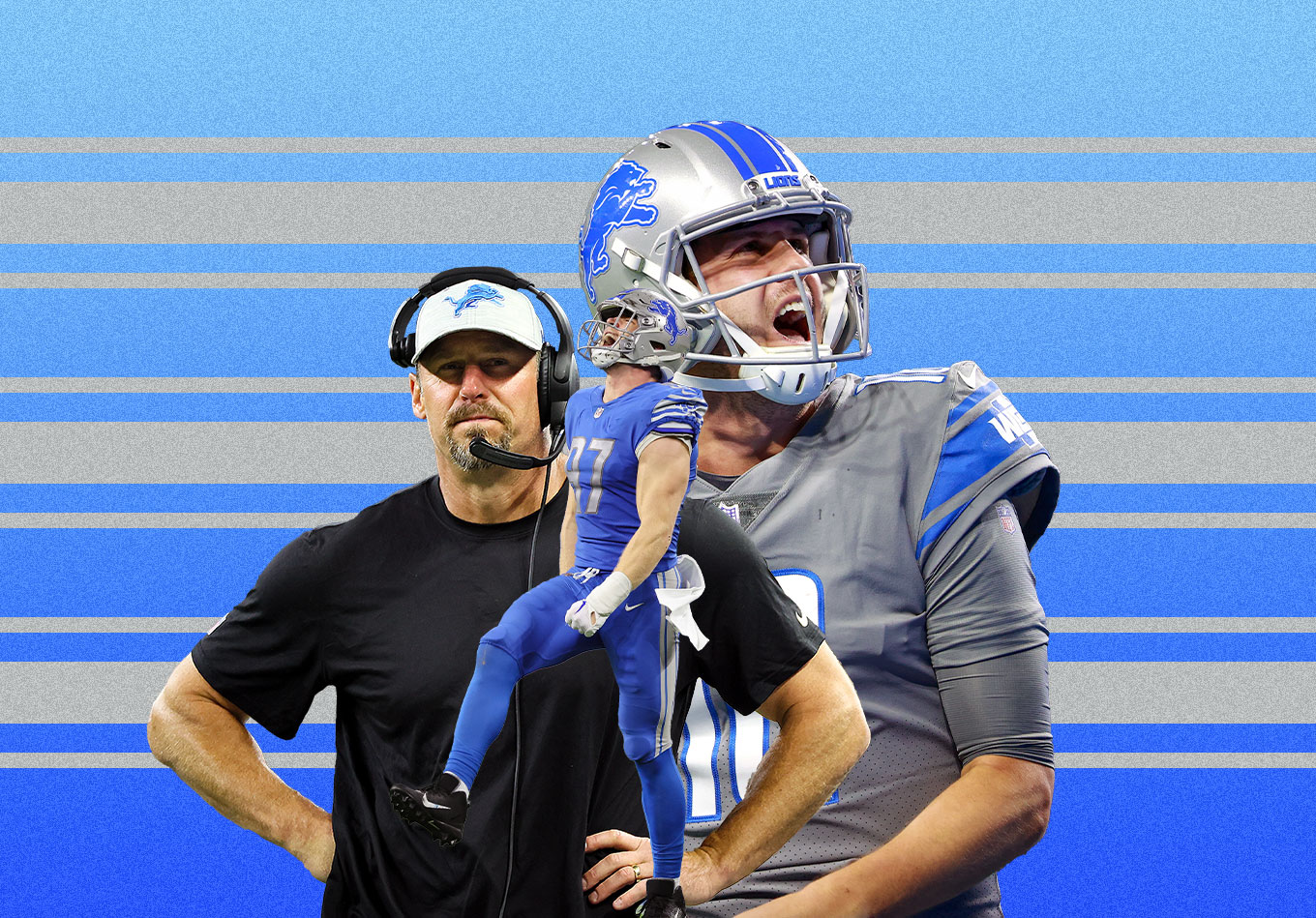 There haven’t been many opportunities to say this in the past handful of decades, but Detroit Lions fans have a lot of reasons to be both happy and optimistic right now.

Losing Matthew Stafford in a trade nearly two years ago was painful, but the Lions got to see their former franchise quarterback win a Super Bowl. And somehow, they still have the league’s hottest passing attack, currently own the No. 4 overall pick in the 2023 NFL Draft by way of a pick acquired from the Los Angeles Rams in that Stafford trade and have won six of their last seven games (including three straight).

It’s been a strange and unpredictable season for the 7-7 Lions split into three distinct parts: the frustrating, the awful and the good.

Let’s take a closer look into how Detroit has turned around its season and how much credit quarterback Jared Goff deserves for the hot streak.

Over the first four weeks, the Lions had a top-10 offense, ranked first in offensive EVE (Efficiency Versus Expected), eighth in passing EVE and first in rushing EVE. But they started out 1-3 behind one of the NFL’s absolute worst defenses, which ranked 31st in defensive EVE, 29th in EVE against the pass and 31st in EVE against the run.

Top cornerbacks Jeffrey Okudah, Mike Hughes and Amani Oruwariye combined to allow 52 catches on 69 targets for 687 yards, three touchdowns, no interceptions and a 120.9 passer rating. There wasn’t a single QB in the NFL over the first four weeks of the season with that high of a passer rating. As a whole, Detroit had the sixth-worst burn-allowed percentage in the league at 54.7% over that span.

Meanwhile, Lions quarterback Jared Goff, acquired in the Stafford trade along with a third-round pick and two first-round picks, was fourth in passing EVE behind Patrick Mahomes, Tua Tagovailoa and Josh Allen.

Detroit was rough in its next two games against the New England Patriots and Dallas Cowboys, bookending a bye. Over that three-week stretch, the Lions ranked 16th in offensive EVE, 14th in passing EVE and 20th in rushing EVE. And their defense ranked 31st in EVE, 28th in EVE against the pass and 27th in EVE against the run.

Goff’s efficiency cratered. His passing EVE dropped from 1.75 to 0.36 (11th) despite a ninth-best completion percentage over expected. He threw three of his seven interceptions in those two games and was sacked seven times.

And it didn’t help that Detroit didn’t have key players like edge defender John Cominsky, wide receivers DJ Chark and Jameson Williams, cornerback Will Harris and running back D’Andre Swift. Or that wideouts Amon-Ra St. Brown and Josh Reynolds, and left guard Jonah Jackson were banged up in that stretch of time.

Things began to turn around offensively in a Week 8 loss to the Miami Dolphins, however. And since the Lions’ string of wins began in Week 9, they’ve ranked 11th in offensive EVE, seventh in passing EVE and 21st in rushing EVE.

The Lions have seen major improvement from two recent high picks since midseason in 2022 second-overall pick Aidan Hutchinson and 2021 third-round pick Alim McNeill. McNeill ranks 41st in the NFL in pass-rush win rate (42.4%), while Hutchinson (34.4%) and Cominsky (35.3%) are both well above the league average (28.7%).

It helps to have cornerback Jerry Jacobs and edge defender Romeo Okwara back, as well. The Lions also benched Oruwariye and defensive lineman Michael Brockers.

On offense, the Lions have taken a more conservative approach with Goff and it’s led to much more efficient play from the 2016 No. 1 overall pick. Over the first eight weeks of the season, Goff ranked ninth among 35 qualified quarterbacks in air yards at 8.5. Since Week 9, he’s 34th at 5.8 air yards.

Goff had the ninth-most deep attempts through the first eight weeks and wasn’t overly successful on those targets, completing 10-of-31 passes for 259 yards with three touchdowns and two interceptions. He had the 13th most intermediate targets from 10-19 yards and completed 28-of-49 attempts for 569 yards with three touchdowns and three interceptions.

Since Week 9, Goff is 22nd in deep attempts and 16th in intermediate throws. His deep-attempt rate has nearly been halved from 12.4% in Weeks 1-8 to 6.9% from Week 9 on. His only interception over the last seven weeks came on a throw from 10-19 yards. He has the NFL’s second-highest passer rating on short passes since Week 9.

The offensive line has also been phenomenal in recent weeks. Among the starters, only right tackle Penei Sewell has allowed a sack. Jackson, left tackle Taylor Decker, center Frank Ragnow and right guard Evan Brown have blanked opposing defenders while also opening up creases for the running backs. After ranking 20th in the league with a 41.5 pressure-allowed percentage in Weeks 1-8, the Lions rank 13th with a 36.5% rate since Week 9.

And that’s important. Goff has struggled under pressure with a 70.7 well-thrown percentage that ranks 24th in the NFL among those with at least 60 pass attempts in those situations.

It has helped that St. Brown has become a serious threat in the passing game with the third-most receiving yards and second-highest catch rate among pass catchers since Week 9 with 54 receptions on 65 targets for 630 yards with three touchdowns and no drops.

HOW THEY GOT HERE

It’s not a major surprise that the Lions were able to rebound so quickly from last season’s 3-13-1 record given general manager Brad Holmes’ drafting success over the last two years. The Lions have thus far missed on 2021 second-round pick defensive tackle Levi Onwuzurike, but Sewell, McNeill and St. Brown have been among Detroit’s best players from last year’s class.

It’s too early to tell on the 2022 draft haul, but Hutchinson has been great, and Williams, Josh Paschal, Kerby Joseph, Malcolm Rodriguez and James Houston have been immediate impact-makers.

Holmes has made other savvy moves as well. Linebacker Alex Anzalone and running back Jamaal Williams were solid free-agent signings in 2021, and Detroit was smart to let wide receiver Kenny Golladay walk in free agency and let the New York Giants deal with his albatross of a contract

Perhaps Holmes’ best move was not succumbing to pressure by inserting himself into the 2022 QB carousel. Rather than signing or trading for a quarterback like Russell Wilson, Marcus Mariota, Carson Wentz, Mitchell Trubisky, Matt Ryan or Baker Mayfield, all of whom have been less efficient than Goff, or reached for one of the rookie quarterbacks, the Lions stood pat at the position, and it’s paid off.

Goff still has his limitations, but he’s been much better in Year 2 and has the Lions vying for a playoff spot.

WHERE THEY GO FROM HERE

In the short term, Detroit currently sits at ninth in the NFC, tied with the Seattle Seahawks and a half-game behind the 7-6-1 Washington Commanders for a playoff spot. With the Carolina Panthers, Chicago Bears and Green Bay Packers left in the 26th-most difficult remaining strength of schedule, they have a 46.4% chance of making the postseason.

According to our model, they have the 13th-best probability of winning the Super Bowl at 0.2% and the sixth-best odds of making it out of the NFC at 0.8%. And their current win total is projected to be 8.4 – ahead of the Tampa Bay Buccaneers’ 8.2.

That being said, if the Lions are in love with Bryce Young, C.J. Stroud or Will Levis, they’ll likely have the ammunition with the Rams’ first-round pick and their own to move up wherever they want in the 2023 NFL Draft. And if they aren’t infatuated with any of the top QBs, it could still make sense to take a player like Anthony Richardson or Hendon Hooker later in the draft to groom as the future QB, especially given the backup situation with Nate Sudfeld behind Goff.

Goff has been very good over the second half of the season, but the year has also shown his limitations and this is a quarterback-driven league. The way to compete season after season is to have one of the best QBs in the NFL. What they shouldn’t do is go after a veteran quarterback even if he looks like an upgrade over Goff.

But the Lions might not have this opportunity to strike for a top quarterback again, and if they believe in the top options, they should go after an elite signal-caller.

As good as Goff has been, it’s unlikely he’ll ever reach that plateau.