Ghana vs. Uruguay: Prediction and Preview | The Analyst 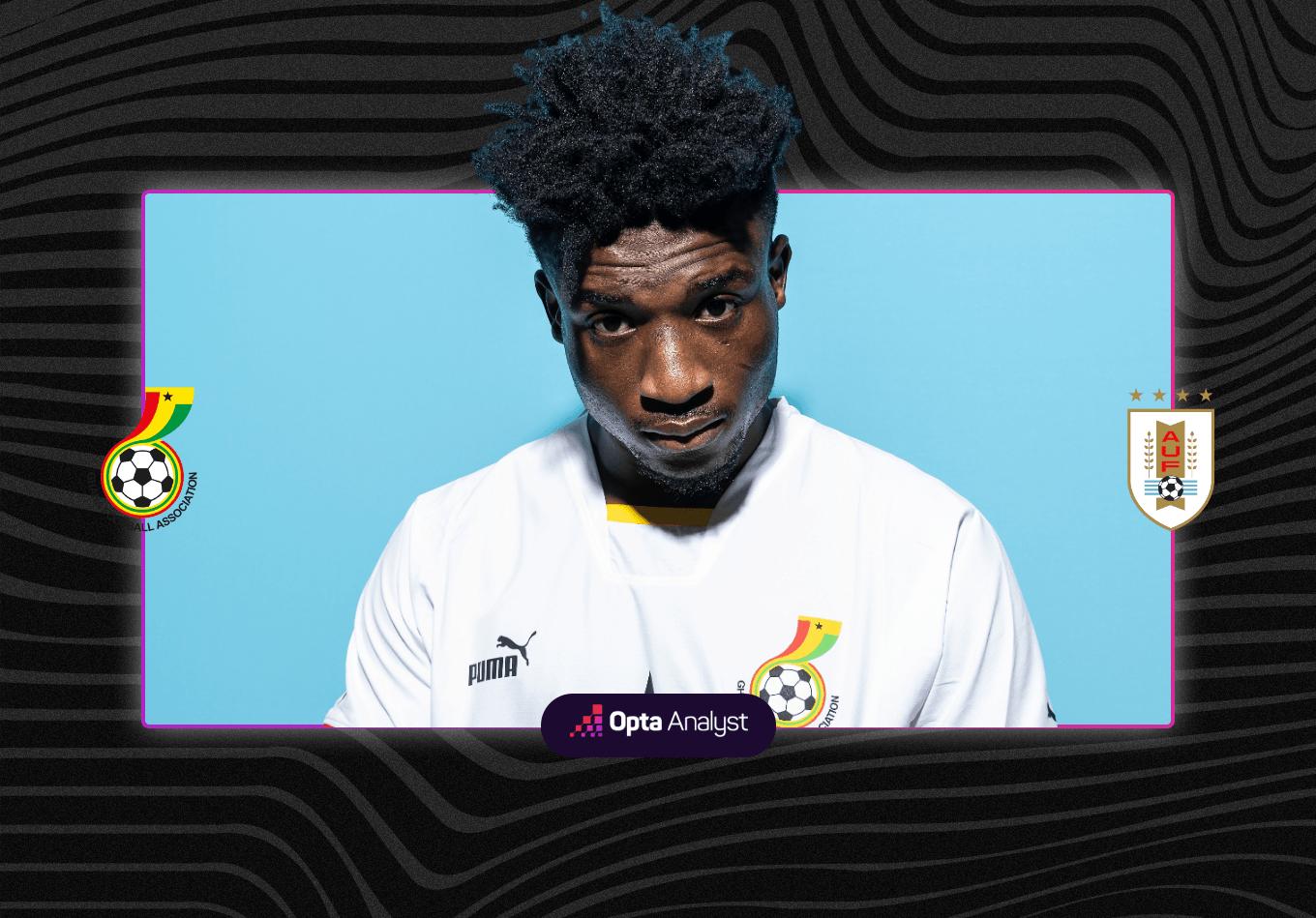 Ghana vs. Uruguay: Prediction and Preview

We preview the 2022 World Cup match between Ghana and Uruguay, including our pre-match prediction for each team’s final game in Group H.

Ghana captain Andre Ayew knows there is more to come from Mohammed Kudus, who has cemented his place as one of the young stars of the 2022 World Cup.

Kudus, who was excellent in Ghana’s opening defeat to Portugal, scored twice for the Black Stars to help them to a 3-2 win over South Korea last time out.

That result means Otto Addo’s team head into their final Group H match, against Uruguay – a fixture that has plenty of history to it – knowing a win would guarantee their place in the last 16, while a draw may also be enough.

Kudus, who was close to joining Everton in August, arrived in Qatar having enjoyed a fine start to the season for Ajax, scoring 10 times, and his form at the tournament has been attracting interest from bigger clubs, with Barcelona director Jordi Cruyff confirming the Blaugrana have been tracking the 22-year-old.

Make three predictions on Ghana vs Uruguay to win $500

“He has a bright future in front of him,” Ayew said of Kudus.

“We know this, I know this, Ghana knows it now, the world is going to know it. You’ll see, more is coming from my boy.

“Hopefully he can keep on shining because he has a really bright future.”

Friday’s match comes over 12 years on from their only previous World Cup meeting in the quarter-finals in South Africa.

With the game level at 1-1, Luis Suarez used his hand to block Dominic Adiyiah’s header on the line.

The Uruguay striker was sent off, but Asamoah Gyan rattled the crossbar from the resulting spot-kick, before Ghana lost the subsequent penalty shootout.

While Addo has insisted Ghana are not out for revenge, there will no doubt be plenty of bite to the encounter at Al Janoub Stadium.

Uruguay have taken just one point from their opening two matches and need to win to progress, while also relying on Portugal not to slip up against South Korea.

Ghana have scored in their last seven World Cup games and could equal Nigeria’s record of eight for an African nation at the tournament, set between 1994 and 1998.

If they are to win, Kudus will likely play a key role once again. He is the only player to ever score twice in a World Cup match for the Black Stars, and another goal in the tournament would see him match Gyan’s record haul of three goals in a single edition of the World Cup for Ghana.

His first goal against South Korea ended a passing sequence of 31 uninterrupted passes – a World Cup record for Ghana.

Arguably one of the form midfielders in world football over the past year, Valverde was limited to having just one shot and making one key pass against Portugal.

But the Real Madrid star has the ability to take the game away from Ghana if, along with Rodrigo Bentancur, he can win the midfield battle.

Bentancur won possession 19 times against Portugal, the most by a player in a 90-minute World Cup match since Brazil’s Mauro Silva in 1994 against the United States (also 19).

Despite Uruguay’s disappointing start in Qatar, our match prediction model still makes them favourites for this one, ranking their chances of victory at 54.8%.

Uruguay have never lost a World Cup match against an African nation, and Opta say Ghana only have a 21.3% likelihood of taking three points.

The draw is given a 23.9% chance, and that result would suit Ghana as long as Korea do not beat Portugal by a two-goal margin.