NFL Prospects to Watch in NDSU vs. SDSU Final | The Analyst 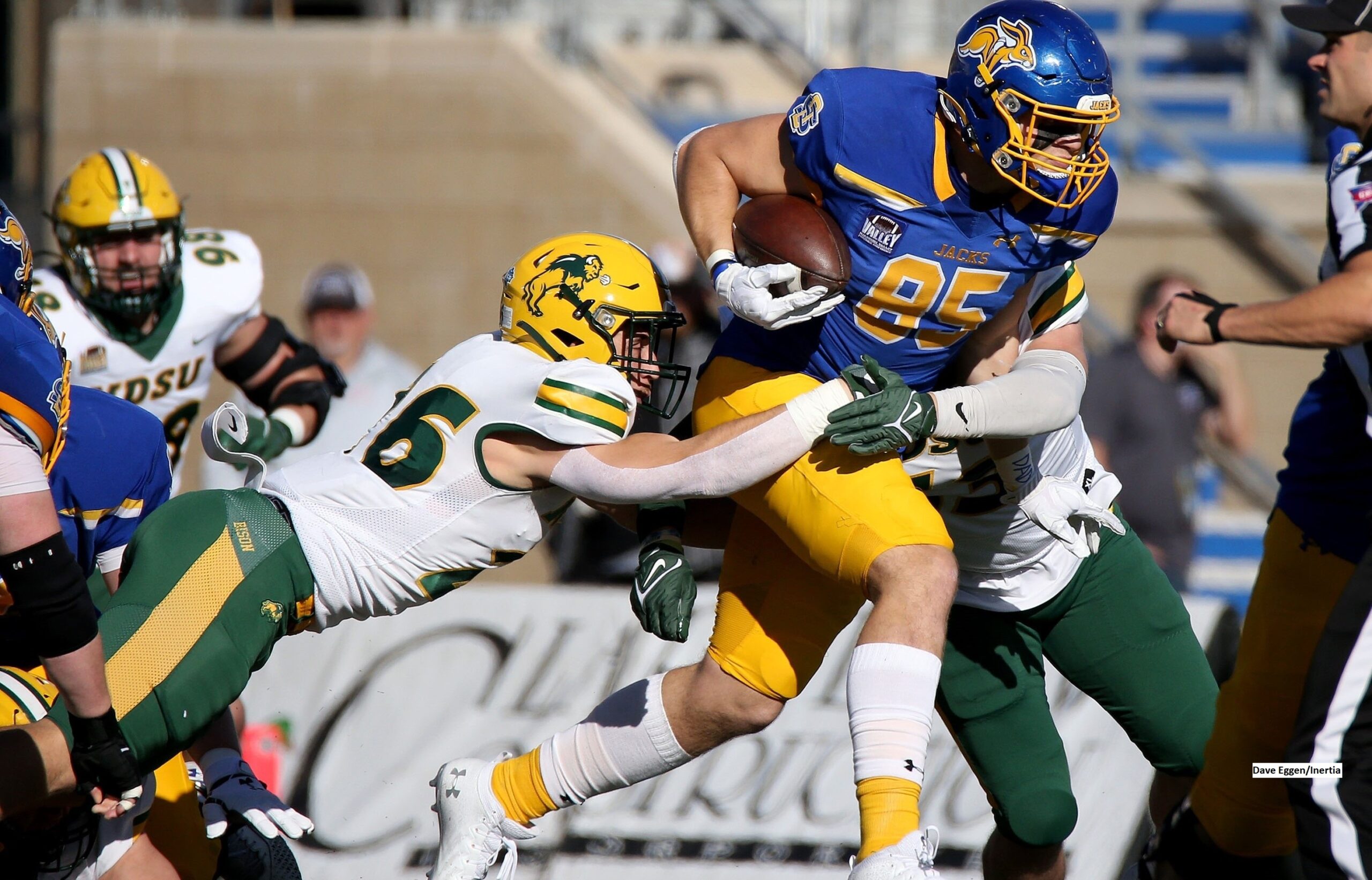 The rosters of FCS finalists South Dakota State and North Dakota State are among the deepest in NFL prospects since the championship game was moved to Frisco, Texas, in the 2010 season.

While injuries will prevent some key NDSU prospects from playing in the highly anticipated final on Jan. 8, the defending champion Bison are a hot commodity with NFL scouts. They’ve produced an FCS-high 11 selections in the last nine drafts, including No. 2 (Carson Wentz, 2016) and 3 (Trey Lance, 2021) overall picks.

Scouts also will keep a close eye on a vast array of talented SDSU players, particularly on the Jackrabbits’ offense. Three of their four draft selections since 2018 were offensive players, led by tight end Dallas Goedert in the 2018 second round.

We asked Josh Buchanan, a small school draft analyst for NFL Draft Scout and Phil Steele Publications, to break down the leading 2023 and ‘24 prospects from both finalists:

1. LT Cody Mauch – The big 6-foot-5, 303-pounder is a strong, physical player who finishes blocks and moves very well. He could be a second- or third-round pick, and move inside to guard at the next level.

2. FB Hunter Luepke (injured) – The 6-1, 236-pound bulldozer was having a great senior campaign until a left shoulder injury in mid-November sidelined him for the remainder of the season. Despite the injury, Luepke should receive an NFL Combine invite and get drafted.

3. LG Nash Jensen – Jensen, who will play in an FCS-record 70th career game against SDSU, is a big body (6-3 5/8, 329) who is strong, physical and athletic enough to pull well. Keep an eye on him for day three or as a priority free agent.

4. TE Noah Gindorff (injured) – Prior to injury problems over the last year, scouts had Gindorff pegged as a possible day-three pick. If the big (6-6, 268) tight end can get healthy and test well on pro day, he should at least be a priority free agent.

5. C Jalen Sundell (injured) – He has a big frame at 6-4½, 294 and was on his way to a huge season before a foot fracture in the fifth game has sidelined him. He should be one of the top 2024 prospects in the Missouri Valley Football Conference.

Other players to keep an eye on for an opportunity in an NFL camp:

1. TE Tucker Kraft – A right ankle injury sidelined Kraft (6-5, 255) for the first half of the season. Since getting healthy, he has returned to his lethal pass-catching ways, and before the playoffs, he declared for the 2023 draft as a junior-eligible candidate. He could be a third- or fourth-round pick.

2. RB Isaiah Davis – Davis is just a junior, one to watch next season as a big back (6-1, 220) who is a productive downfield runner with very good vision. He is a potential day three-prospect for the 2024 draft.

3. LT Garret Greenfield – If not for Mauch, then Greenfield would be the top offensive lineman in the MVFC. He has great size (6-5 5/8, 305), good feet and uses his hands well. He has announced a plan to return for a super senior season, so he is a prospect to watch for 2024.

4. TE Zach Heins – He is a big tight end at 6-6½, 260, and a good blocker. During Kraft’s absence, Heins stepped up with a career game against Missouri State (seven receptions, 127 yards, touchdown). He is a likely priority free agent.

5. LG Mason McCormick – Like Greenfield, McCormick (6-4, 305) is putting off entry into the draft and plans to come back for a super senior season. He will be a prospect to watch for 2024 with good strength, the ability to pull and consistent play.

Other players to keep an eye on for an opportunity in an NFL camp: