The Yays and Nays: Our Fantasy Football Rankings, Projections and Top Plays for Week 14 | The Analyst 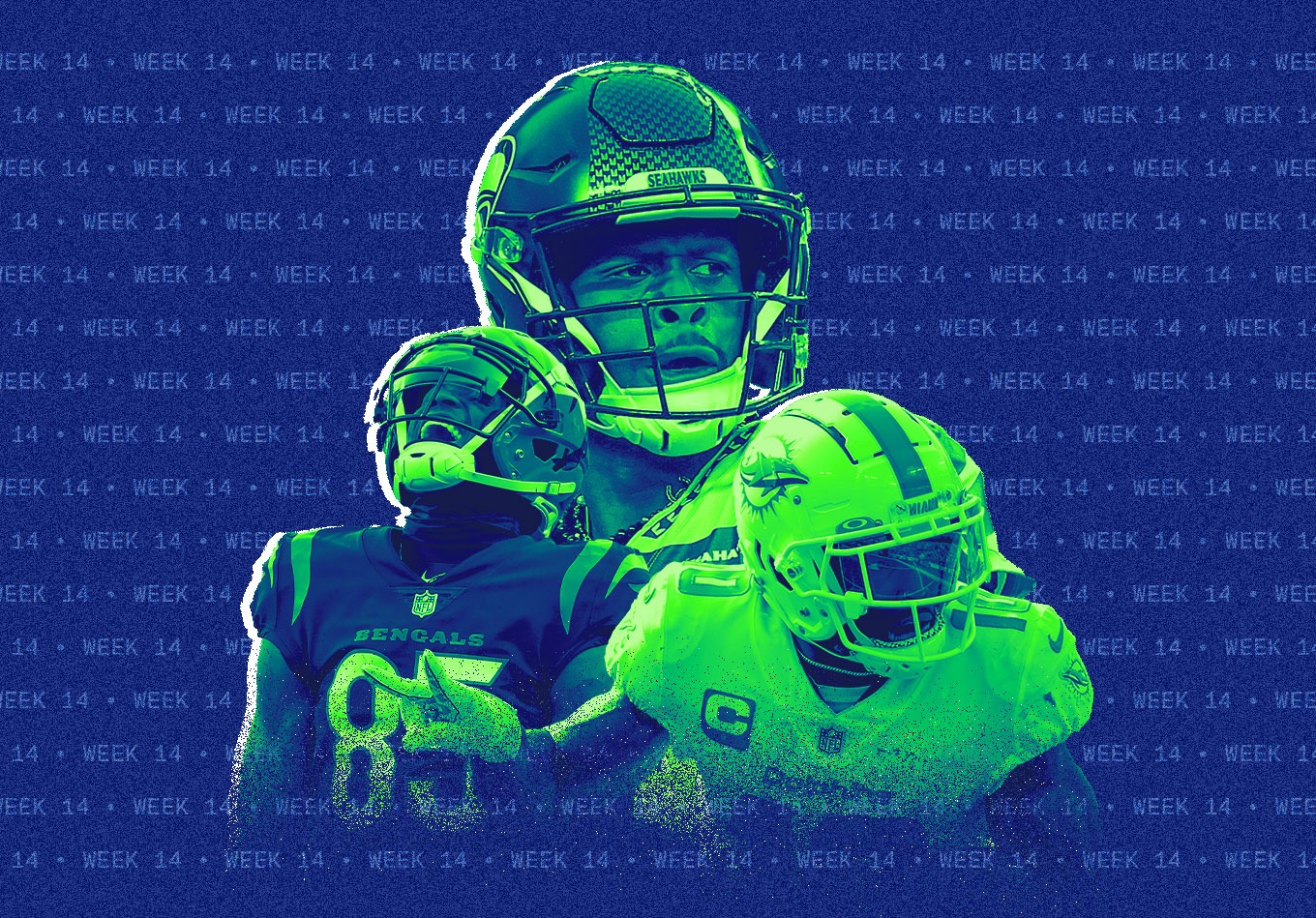 All the way back in Week 2, we opened our Yays and Nays with four overreactions stemming from Week 1.

They were four statements that we thought had a chance, no matter how crazy, that just might play out over the course of the season.

One of them had to do with the wide receiver position. Back in mid-September, we made this grand claim about Cooper Kupp, Justin Jefferson, Ja’Marr Chase, Davante Adams and Stefon Diggs:

The Fab Five are head and shoulders above the rest and (barring injury) will end the season as the top five.

Well, both Chase and Kupp have dealt with injuries this season. But Diggs ranked first, Kupp was second, Adams third, Jefferson fifth and Chase sixth in PPR points per game entering Week 14 among all wide receivers that have played at least eight games (the number of games Chase has played this season).

Of conspicuous absence is, of course, the player with the fourth-most PPR points per game. And that’s who we’ll highlight in this week’s intro.

See, Tyreek Hill is having a season for the ages. He leads the NFL in receptions and has 102 more receiving yards than the next closest player (Jefferson).

But he still has a more than decent chance to break that record, because he’s exploded for some monster games this year. There have been six instances of a player recording at least 10 receptions and 160 receiving yards in a single game this season. Hill has four (!) of them.

This entire Miami Dolphins offense with Jaylen Waddle, Trent Sherfield and Raheem Mostert has been built around speed. Hill is the reason it works. When he faces man coverage, Hill is winning two-thirds of the time – a historically unheard-of rate. Against zone, he’s winning just a shade under 50% of the time, which is still a better rate than Jefferson.

As things stand, Hill ranks second in the NFL in burns – which measures how often the targeted receiver does his part to achieve a successful play (that is, a significant gain toward a first down or touchdown), regardless of the quality of the throw by the quarterback – and first in burn yards per route.

All told, maybe Hill’s impact can only truly be seen when looking at Tua Tagovailoa. The number of statistics that Tagovailoa leads all NFL quarterbacks in is truly staggering, including, but not limited to, yards per pass attempt (9.02), touchdown percentage (6.6) and quarterback rating (112.0).

Back in Week 2, we highlighted burns as a metric to determine which receivers were the best of the best. Hill was in the top six along with those other five. He was then and is most definitely worthy now of inclusion into that group of absolute elites. And as is befitting of that status, he is our model’s WR1 this week.

As always, let’s jump around and evaluate some Week 14 projections gathered from some of the top data-driven projections available using several of our AI-powered models. Refer back to our fantasy football rankings for any questionable waiver wire or lineup decisions.

Note: We’re comparing our rankings to the expert consensus rankings (ECR) from Fantasy Pros. Our rankings here may not match those on our rankings page, which is updated throughout the week. (We pulled these numbers from Friday.) Once again, we are using PPR unless noted otherwise.

Week 14 got off to a roaring start with Baker Mayfield leading the Los Angeles Rams to a most improbable win over Derek Carr and the Las Vegas Raiders. It was one of the best games of the season, because of Mayfield’s incredible last-gasp touchdown drive.

But he has nothing on Smith, maybe the NFL’s best story this season. If you’re wondering why he’s so highly thought of by our model, look no further than his previous four games. In each one, he’s thrown for at least 275 yards and multiple touchdowns. He’s now fourth in the NFL in yards per pass attempt and total passing touchdowns.

This week, facing a Carolina Panthers team that has allowed 29 points per game over their last four road games, Smith is a must start this week. The signal-caller for the Seattle Seahawks is only behind Jalen Hurts of the Philadelphia Eagles and Josh Allen of the Buffalo Bills in our model’s QB projections this week.

Do not be afraid to start him over bigger names like Justin Herbert, Kirk Cousins and even Dak Prescott.

Would it surprise you to know that Conner is averaging 22.7 touches per game since Week 10? Or how about that he’s averaging 3.0 receptions per game, which is his highest mark since 2019?

That might surprise his fantasy managers because the Arizona Cardinals starting running back has struggled so mightily this season. Conner enters Week 14 as RB32 on the season, just barely averaging more than 10 fantasy points per game. But things are turning around lately due in part to that massive volume he’s been receiving. Three of his four rushing touchdowns have come in the last three weeks and his 120 yards against the Los Angeles Chargers last weekend were a season high.

It’s a good bet that the New England Patriots will roll out another conservative game plan with Mac Jones leading the way. What that means is that Conner’s increase in volume will likely continue this week. The model sure thinks so. With his 20 projected touches, including three receptions from Kyler Murray, Conner is a strong bet to have a fourth straight productive game. He’s in our model’s top 10.

The only reason to have a player the caliber of Deebo that low in the industry’s rankings is because of the unknown at the quarterback position with Brock Purdy. But our model thinks differently. If you were to think of the perfect player to help a rookie seventh-round pick, you’d likely start with Deebo.

Why? Because Deebo’s average catch this season is just 2.6 yards past the line of scrimmage this season. But he averages 11.4 yards per catch which, for you math nerds out there, means that he averages 8.8 yards after every catch. That leads all NFL wide receivers for the third straight year. Essentially, he catches the ball around the line of scrimmage and runs for a first down. That sounds like a quarterback’s dream.

This is a juicy matchup between two current playoff teams and the legendary Tom Brady against Mr. Irrelevant in his first career start. For the San Francisco 49ers to notch a win against the Tampa Bay Buccaneers, Deebo will have to have multiple touches. Our model is expecting that and Deebo is a strong WR2 as a result.

It’s been a brutal year for the man they call Bobby Trees. His season high is 13 PPR points, in part because he only has one game with more than four receptions. Of course, only having one touchdown doesn’t help the cause either.

However, this is the week things turn around ever so slightly for Woods. Since the beginning of November, the Jacksonville Jaguars are allowing 296 passing yards and over two passing touchdowns per game. With Treylon Burks still not practicing after suffering an injury last week, Woods is in position to take advantage of the weak Jags pass defense.

With six teams on bye, there is likely some last-minute scrambling going on to fill Flex spots within your league. Woods is not the sexy option, but he might be the most solid. Our model likes his chances of providing WR3/Flex value.

Unlike the aforementioned Geno Smith, Jones does not enter Week 14 with a promising passing or rushing trend. In fact, the opposite is true. He’s only surpassed 230 passing yards once this season and in his last five games, he only has one rushing touchdown.

And things only get tougher as the New York Giants welcome the Eagles to the Meadowlands. The Eagles rank first in the NFL in yards allowed per play and opponent passer rating.

But most importantly, they haven’t surrendered a rushing touchdown to a quarterback all season and have only allowed 70 combined rushing yards to QB over their last five games. This, therefore, is likely to be a heavy Saquon Barkley game if he’s healthy enough to play.

The Eagles, who have the best defense Jones has seen all season, have plenty of motivation to keep winning as they try to hold off the Minnesota Vikings for the NFC’s top seed. Our model is pessimistic that Jones will be able to provide value close to his current ranking of QB11. He’s in the low-end QB2 tier with quarterbacks like Tyler Huntley, Ryan Tannehill, Mike White, Kenny Pickett, Sam Darnold and Davis Mills.

While Philly will be trotting out an elite defense, the defense of the G-men isn’t too shabby either. New York is 11th in points allowed per game and outside of one outlier game to Jamaal Williams, D’Andre Swift and the Detroit Lions, it has only allowed one rushing touchdown to a running back in its last four games.

The fantasy output from Sanders has been strong the last two weeks, but the underlying numbers aren’t as promising. Sanders has not had more than 50% of his team’s carries in any of the last three games and in his last six games, Sanders has only had six total receptions.

As a result, he’s only projected for 1.2 catches this week – the fourth fewest among any of our model’s top 28 running backs. Sanders will need a touchdown against a defense that has been stingy to running backs to deliver RB2 value this week. D’Onta Foreman, with a much better matchup, is one of many running backs better suited to have a good week.

Well, last we checked, Chase is playing in this game, which means he will resume his position as Joe Burrow’s favorite target. In addition, Joe Mixon is likely coming back right in time to face the horrendous Cleveland Browns’ rush defense. Our model, therefore, is projecting Higgins for 4.8 receptions and 64.7 receiving yards, which are numbers right in line with his season-long averages.

Higgins likely will need a touchdown to provide anything more than WR2 value.

Through Week 9, Smith-Schuster had been targeted at least eight times in all but two games, culminating in a 12-target outing against the Tennessee Titans. He only has 11 targets since that game, producing three straight with fewer than 40 receiving yards.

While it’s a good bet that JuJu will turn things around at some point, it’s not likely to start this week. The Denver Broncos are second in the NFL in yards allowed per play and first in the NFL in offensive touchdowns allowed – four fewer than the next closest team.

Patrick Mahomes, tight end Travis Kelce, and head coach Andy Reid will have their hands full against this excellent defense. However, with an awful Russell Wilson-led offense on the other side, the Chiefs won’t feel too much pressure to score a ton of points. Our model is projecting Mahomes for only 266.6 passing yards, more than 50 yards below his season average of 317.3. Smith-Schuster, therefore, is a risky Flex play.