England vs. France Prediction and Preview | The Analyst 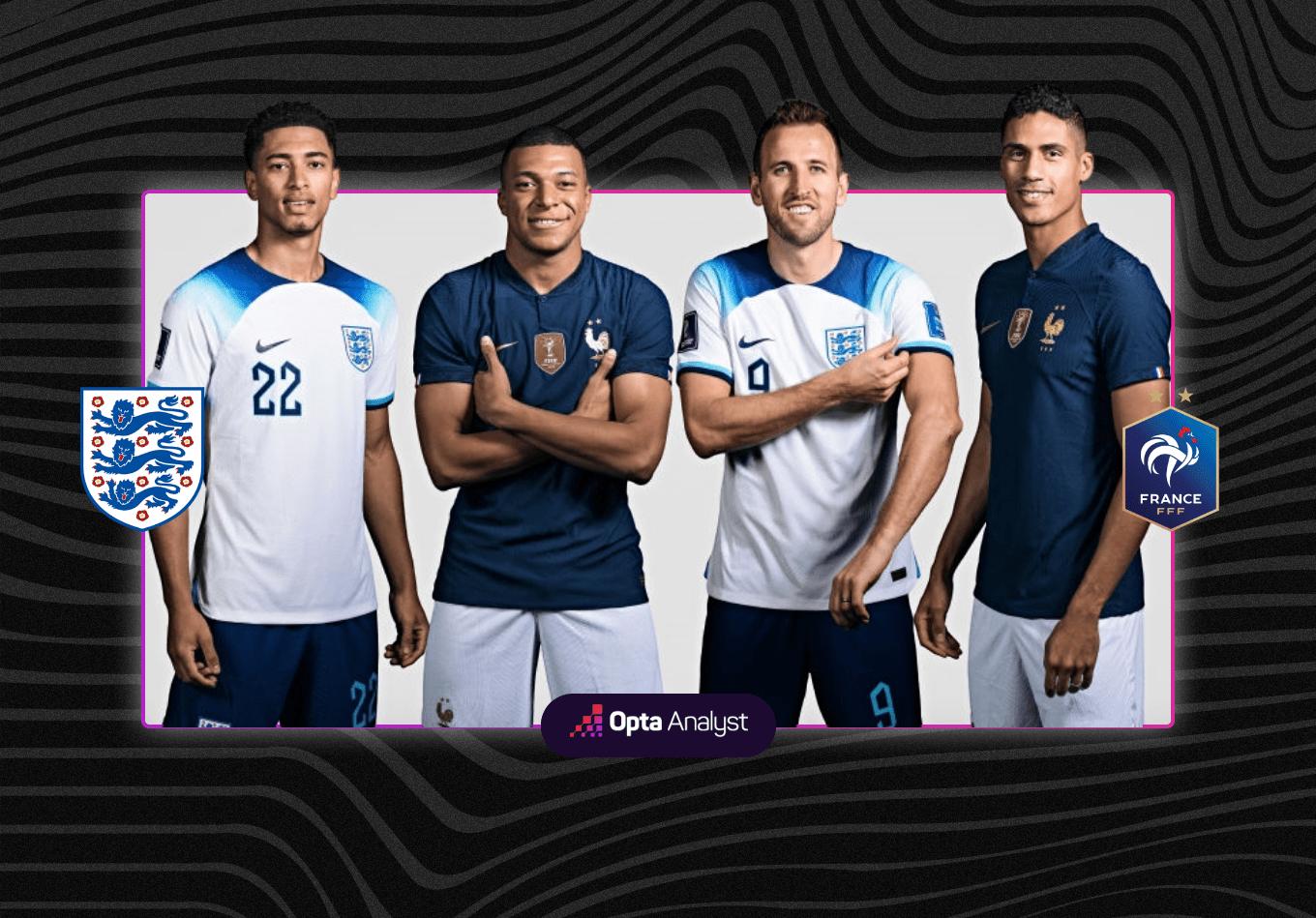 After prevailing against Senegal and Poland, England and France face off in the final quarter-final at Qatar 2022. We preview the game ahead of kick-off at the Al Bayt Stadium in Al Khor, with added insight from our supercomputer model.

Neither England nor France see a clear favourite as they prepare to face one another in a highly anticipated World Cup quarter-final.

The Three Lions and Les Bleus each eased through the group stage and the last 16, beating Senegal and Poland respectively in the last round to set up a far trickier tie in the next round.

Although England have won both of the sides’ previous World Cup meetings, France have lost just one of the past eight between the nations in all competitions.

England have impressed in attack across three of their World Cup games in Qatar so far, with 12 goals across those three matches versus Iran, Wales and Senegal, including strikes by Jordan Henderson, Bukayo Saka and Harry Kane in the 3-0 last 16 win over the African champions.

But it’s not just been attack that they have impressed, with three successive clean sheets thanks much to the performances of Jordan Pickford in goal and Harry Maguire and John Stones in central defence.

Make four predictions on England vs France to win $500

France head into the quarter-finals as the team with the second-most shots (75) and third-highest expected goals total (8.8), but have golden boot hopeful Kylian Mbappe looking to add to his overall tally of nine FIFA World Cup goals – the same as Lionel Messi and one more than Cristiano Ronaldo, despite the PSG striker still being just 23 years old. With service being provided by the more than capable Antoine Griezmann and Ousmane Dembélé, he’ll undoubtedly be a player that the English are worried about.

Didier Deschamps’ side are the world champions – albeit the first holders to feature in a quarter-final since Brazil in 2006.

Meanwhile, Gareth Southgate is hoping to become the first England manager to go to two World Cup semi-finals, and Kyle Walker – on whom there is plenty of focus ahead of the battle with French star Mbappe – cannot split the two teams.

“We’re playing the world champions, but we are two good teams that will go toe to toe,” the England right-back said. “You’ve seen what can happen in 90-plus minutes.

“There have been shocks and for us this is just another game. We take our hat off to them as world champions, but each and every one of us will not be rolling that red carpet out for them to treat it as a theatre.

“We have great talent – talk about the goals we have scored and the clean sheets that we’ve kept. In my eyes, neither team is the underdogs or the favourites.”

It is an assessment France midfielder Adrien Rabiot agrees with, even if England have been eliminated from six of their past eight World Cup knockout matches against fellow European nations.

“They are a team that has the same characteristics as us, very fast on the wings, with attacking full-backs, midfielders who can get forward, and [Declan] Rice looks a bit like [Aurelien] Tchouameni,” Rabiot said.

“I am not sure that we should say that we have to be careful. They will also be very careful because we have the possibility of putting them in difficulty.

“It’s an open game with two teams who know how to counter. What can make a difference is set pieces. They are very good, we will have to be vigilant and not make the same mistakes as against Denmark. They have weapons, but we are not inferior.”

Teenage sensation Bellingham will play a huge role in getting England up the pitch. He has won possession more often than any team-mate (23), with only Harry Kane (six) doing so more often in the final third (five). He’s been a key part of England winning the most high turnovers at the tournament (38).

Mbappe has the talent to decide the game not just by scoring but also by setting up Giroud, as he did against Poland. Mbappe (five) alone has scored more goals for France at this World Cup than the 36-year-old (three). The only older player to net four at a single World Cup was 38-year-old Roger Milla for Cameroon in 1990.

England players will know Giroud well from his nine seasons as a Premier League goalscorer at Chelsea and Arsenal.

Neither Walker nor Rabiot may be able to choose a favourite, but Opta’s supercomputer can – just.

France are given a 40.3% chance of winning, ahead of slight underdogs England’s 32.4%. In a tie this tight, extra time or penalties could be required, with the draw rated at 27.3%.