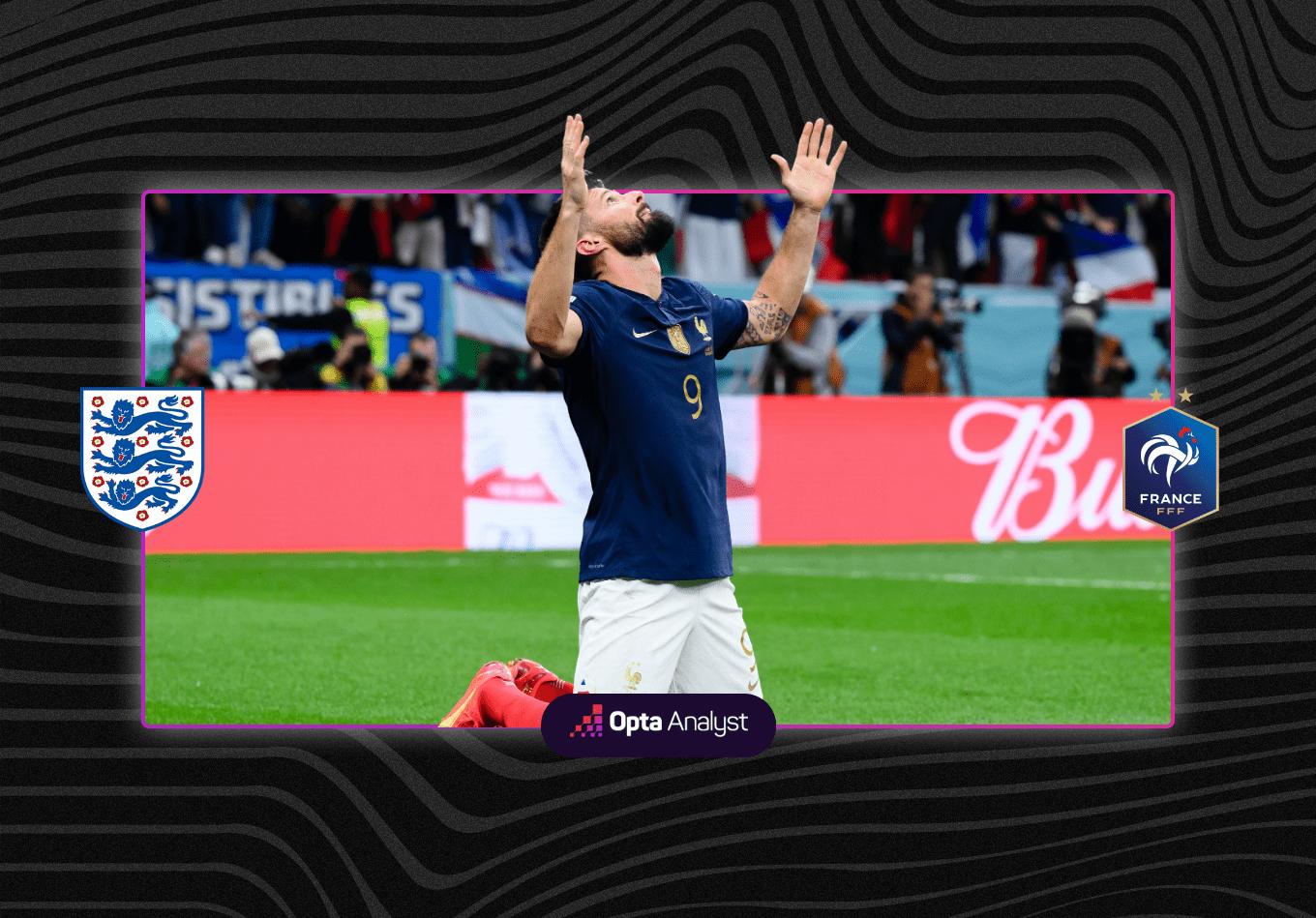 England versus France. The nation who codified football against the nation who – via the brain of Jules Rimet – invented the World Cup, and yet this was the first time the two countries had faced each other in a tournament knockout tie. About time. Less a Year in Provence and more about guaranteeing a month in Qatar, both sides came into this game knowing history was against them. France were trying to stay in with a chance of becoming the first team to retain the World Cup since Brazil in 1962, while England were simply trying to reach a semi-final outside of Europe for the first time in their history. Two nations connected by the longest underwater tunnel in the world, it was time to see who had the ability to dig out a result on the biggest stage.

There were precisely no shocks when the line-ups were announced, both managers sticking with the XIs that had guided them through the second round with relative ease. It was the first time Didier Deschamps hadn’t made a tweak to his line-up since 2019. The first casualty of the game was the match ball, which burst – or, more accurately, deflated – within the first minute. Sometimes the pressure gets to you, sometimes you simply need more pressure.

The first real chance of the game was an Olivier Giroud header in the 11th minute, which Jordan Pickford handled well, but six minutes later the England goalkeeper was beaten by a magnificent strike from Aurélien Tchouaméni, created by the pace of you know who on France’s left flank, although England felt the move had started with a foul on Bukayo Saka. The final pass to Tchouaméni came from Antoine Griezmann, his 27th assist for France, more than any other player in recorded history. The man who simply doesn’t miss international games (this was his 72nd in a row) had kickstarted France’s chances of playing two more at Qatar 2022.

England responded well, getting Harry Kane on the ball between the lines, and it was a burst from the captain into the box midway through the half that brought the first controversy of the match, Kane seemingly fouled on the right hand side of the penalty area, but both the referee and later the VAR team deciding: actually, no. Kane’s response a few minutes later was to lash an attempt from outside the box which Hugo Lloris was only just able to save. The intra-Spurs battle between them would come to dominate the match.

The final chance of the half was an extremely skied effort from Kylian Mbappé which ushered in a period of territorial dominance from England, albeit without many decisive passes. The half ended with an almost even territory split of 23%-55%-22%. In truth it was a textbook evenly matched opening period, other than the fact that France were leading, which in historic terms, has proven a major problem for England in their long and largely unsuccessful World Cup history.

England started on the front foot in the second half, Jude Bellingham seeing an absolute croque monsieur of a shot from outside the box which was tipped over by Lloris. Bukayo Saka continued to influence proceedings from the right flank and after the non-penalty drama of the first half there was no doubt when Saka was fouled in the box by Tchouaméni, France’s first half hero. It set up a Tottenham Hotspur training ground spot-kick routine, straight outta Enfield. And did anyone doubt that Harry Kane would score the penalty with the classic combination of pace and direction, so often missing in penalties at this World Cup?

The goal took Kane to four World Cup penalty goals, a record, and more significantly took him level with Wayne Rooney as the nation’s all-time leading goalscorer. No-one has been playing international football longer than England but this was their 13th goal at this World Cup, a record for them in a single tournament. Progress, of sorts.

Within two minutes of England equalising Adrien Rabiot waltzed through the middle of England’s defence, forcing Jordan Pickford into a decent save, but the bulk of the good chances were still coming England’s way. Kane hitting the target again from outside the box, Harry Maguire nudging the post with a header from a set-piece, Theo Hernández just getting in front of the superb Saka to defend a great cross from Luke Shaw. England fans with memories of, say, the disappointing 2002 quarter-final, at least had a performance to remember, whatever the result.

But England had to remember that they were facing the world champions, and although that status hasn’t been helpful to too many reigning holders in recent editions, France have quality and know-how throughout their squad, and no more so than in Griezmann, who whipped in a 78th-minute cross which Olivier Giroud headed in, via the equally famous skull of Harry Maguire. Against the run of play France were leading. Two assists from the man who had a rested autumn.

VAR told Wilton Pereira Sampaio, a name that will be remembered for some time, to have another look and he did so, observing on a local television screen that Mount had indeed been fouled. Penalty number two for England, penalty number two for Harry Kane. And Kane never misses, right?

Except this time he did. High into the atmosphere that still holds on to Chris Waddle’s 1990 penalty like a broken satellite. It was England’s first ever penalty miss outside of a shootout at a World Cup. That’s right, the narrative was lying to you. England are one of the most reliable teams from 12 yards in World Cup football. Until they weren’t. Until today.

France saw out the rest of the game and injury time, and, in Mbappe, Griezmann and Giroud have a triple threat that even Morocco might struggle with in the semi-final. But the world champions were ragged in that second period, completing only 71.5% of their passes, compared to England’s 84.7%. England had 11 shots after the break to France’s five, but it won’t be a first semi-final on non-European soil for them. Instead France are the first reigning champions to reach the last four since Brazil in 1998.