What Can Teams Learn From Last Year's Failed Offseason Quarterback Acquisitions? | The Analyst 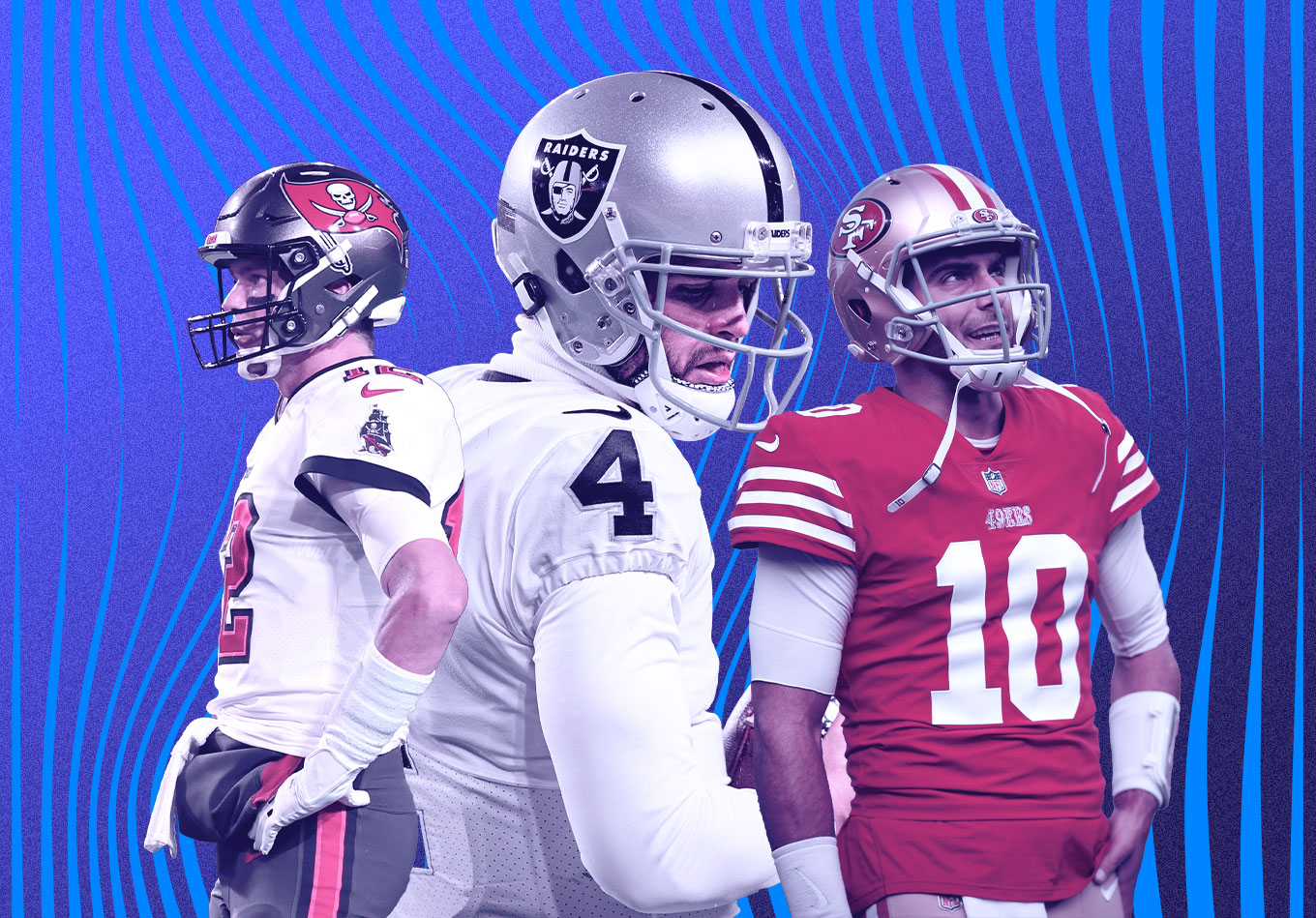 The Las Vegas Raiders made a business decision on Wednesday when head coach Josh McDaniels formally announced that starting quarterback Derek Carr was benched and backup Jarrett Stidham will start over the final two weeks of the season.

Carr has not been good this season. He’s seen his passing EVE, well-thrown percentage and catchable percentage drop from 2021 and his pickable pass percentage rise.

But this decision ultimately was made because Carr’s $32.9 million 2023 salary and $7.5 millions of his 2024 salary were fully guaranteed for injury. The Raiders are clearly planning an exit strategy to move on from Carr and wanted to leave themselves an option to release him if he suffered an injury over the final two weeks.

So even though the Raiders are still in playoff contention, Carr has been benched for a career backup, and it raises the question of where he’ll end up in 2023 and beyond.

Las Vegas must decide on Carr by a deadline of three days after the Super Bowl. On that date, Carr’s 2023 salary and $7.5 million of his 2024 salary will become fully guaranteed. So the Raiders must cut him or find a trade partner before that deadline. They would be left with just $5.625 million in dead money if they cut Carr. That figure is reduced to $1.875 million if they trade him.

And if a team did back out, then the Raiders would be stuck with Carr’s full 2023 salary and $7.5 million of his 2024 salary. Carr has a no-trade clause, so that does complicate matters to some degree.

It would be surprising if the Raiders were forced to cut Carr based on some of the quarterback movement this offseason. Worse quarterbacks than Carr were traded with their full salaries left intact. At the same time, however, teams should be rightfully wary about trading for a veteran quarterback after seeing how those players actually performed on new teams this season.

Carson Wentz has been traded in consecutive offseasons for first- and third-round picks prior to the 2021 season and for two third-round picks prior to the 2022 season. Wentz is back in the starting saddle in Washington, but he lost his job at midseason to Taylor Heinicke and seems unlikely to be back with the Commanders next season unless the team can go on a serious playoff run.

But if a player like Wentz can be traded despite a $28.3 million cap figure in 2022, then Carr should retain some value after this season as well. Carr has struggled, but he’s also played half of the season without tight end Darren Waller and star slot receiver Hunter Renfrow. Offseason addition Davante Adams wasn’t quite as productive this season from a catches and receiving yards standpoint, but he already has the third-most receiving touchdowns of his career through 15 games.

The issue is that nearly every single quarterback who switched teams this offseason has struggled in 2022. Wentz, Mitchell Trubisky, Matt Ryan, Marcus Mariota and Baker Mayfield have been benched. Russell Wilson is having a career-worst season and likely would have been benched if not for his salary and the trade package the Denver Broncos gave up to acquire him. Andy Dalton has actually performed pretty well from an analytical perspective, but the Saints are 6-9 and it seems unlikely that he’ll be handed a starting job in 2023.

Fascinatingly, Jacoby Brissett performed very well for the Cleveland Browns after moving on from the Miami Dolphins, while Deshaun Watson has struggled since taking over the starting job following his 12-week suspension for violating the NFL’s personal-conduct policy after being accused by 20 women of sexual misconduct.

The hit rate on veteran quarterbacks performing well in new surroundings this season is exceptionally low. One of the reasons for that is that typically, there’s a reason why that quarterback is even being made available in the first place. Teams don’t make a habit out of trading franchise quarterbacks or making them available in free agency. Even Wilson, who was still regarded as one of the NFL’s best quarterbacks in 2021, had worn out his welcome in Seattle before being traded to Denver.

So, there’s a buyer-beware element in place for any team that would want to trade for Carr this offseason. At the same time, Carr ranks 10th in well-thrown percentage, fifth in air yards, eighth in catchable percentage and 11th in pickable percentage over the last three seasons. He’s a good, quality quarterback. But he’s a good, quality quarterback who will cost his new team more than $40 million and draft picks if acquired via trade, and there are other, cheaper options available in free agency that won’t cost draft capital to acquire.

And there are other quarterbacks who, like Carr, could become available via release or trade on top of the QBs already set to hit free agency. There’s a world in which Aaron Rodgers, Zach Wilson, Jameis Winston, Jordan Love, Ryan Tannehill, Wentz, Ryan, Trubisky and Mariota could be released or traded.

Among qualified QBs over the last three seasons, those players are ranked, based on well-thrown percentage, in this order: Tannehill, Dalton, Rodgers, Ryan, Carr, Jones, Bridgewater, Brady, Darnold, Garoppolo, Mayfield, Heinicke and Wentz.

That all means that there will be plenty more quarterback movement this offseason and it will be interesting to see if teams are as willing to invest resources in veteran quarterbacks, especially since this is a stronger draft class at the position.

Teams looking to upgrade at quarterback last offseason preferred to take the short-term veteran approach rather than reaching on a quarterback like Desmond Ridder, Malik Willis, Matt Corral or Sam Howell. Kenny Pickett was the only quarterback taken in the first round. Bryce Young, C.J. Stroud and Will Levis are expected to be first-round picks this season and Anthony Richardson could sneak into the mix, as well.

Carr expressed his disappointment earlier this season that the Texans didn’t draft him, but also praised the organization for how it treated his family when David Carr was the team’s inaugural first-round pick in 2002. The Titans might be better off sticking with Tannehill, but Carr does have experience with Tennessee’s offensive coordinator Todd Downing.

Brady seems like a somewhat obvious fit for the Raiders if they do indeed trade or cut Carr. Brady would be able to reunite with his long-time offensive coordinator and Raiders head coach Josh McDaniels and Adams, Renfrow, Waller and running back Josh Jacobs (if retained) would give him playmakers with skill sets in which he typically thrives. Brady has seemed to lack a shifty underneath target like Renfrow and pass-catching back like Jacobs during the last two seasons with the Buccaneers.

Garoppolo seems best suited for the Jets since offensive coordinator Mike LaFleur was the 49ers’ former passing game coordinator. Garoppolo knows the system in New York and would be an immediate upgrade over Zach Wilson to compete with White. Garoppolo and Brissett also have experience in McDaniels’ system from their time in New England.

McDaniels liked quarterback Baker Mayfield in the 2018 NFL Draft and had success with Mac Jones if the Patriots had any desire to trade him after a disappointing sophomore campaign with Matt Patricia and Joe Judge in charge of the offense. It would be somewhat surprising if New England decided to trade Jones, but he has a fan in McDaniels. The New Orleans Saints attempted to trade up for him during the 2021 NFL Draft and Sean Payton could return to coaching in 2023. It seems highly unlikely that New England will continue to roll with a Jones/Patricia pairing in 2023, so something has to give.

Obvious system fits could still work, but Russell Wilson’s struggles should be especially concerning for a team expecting a veteran quarterback to come in Year 1 and continue to perform at a high level in a new offense with new teammates without any immediate hiccups.

It should have been apparent at the time when the Raiders signed Carr to his three-year, $121.5 million extension that all that contract represented was a one-year prove-it deal. It came with such little guarantees beyond Year 1 that McDaniels and general manager Dave Ziegler clearly built in outs if things didn’t go well in 2022.

Carr will likely still get traded. But given the struggles of veteran quarterbacks last season, his contract and his ability to pick his next destination with a no-trade clause, the Raiders might not get the compensation package they desire in a deal.