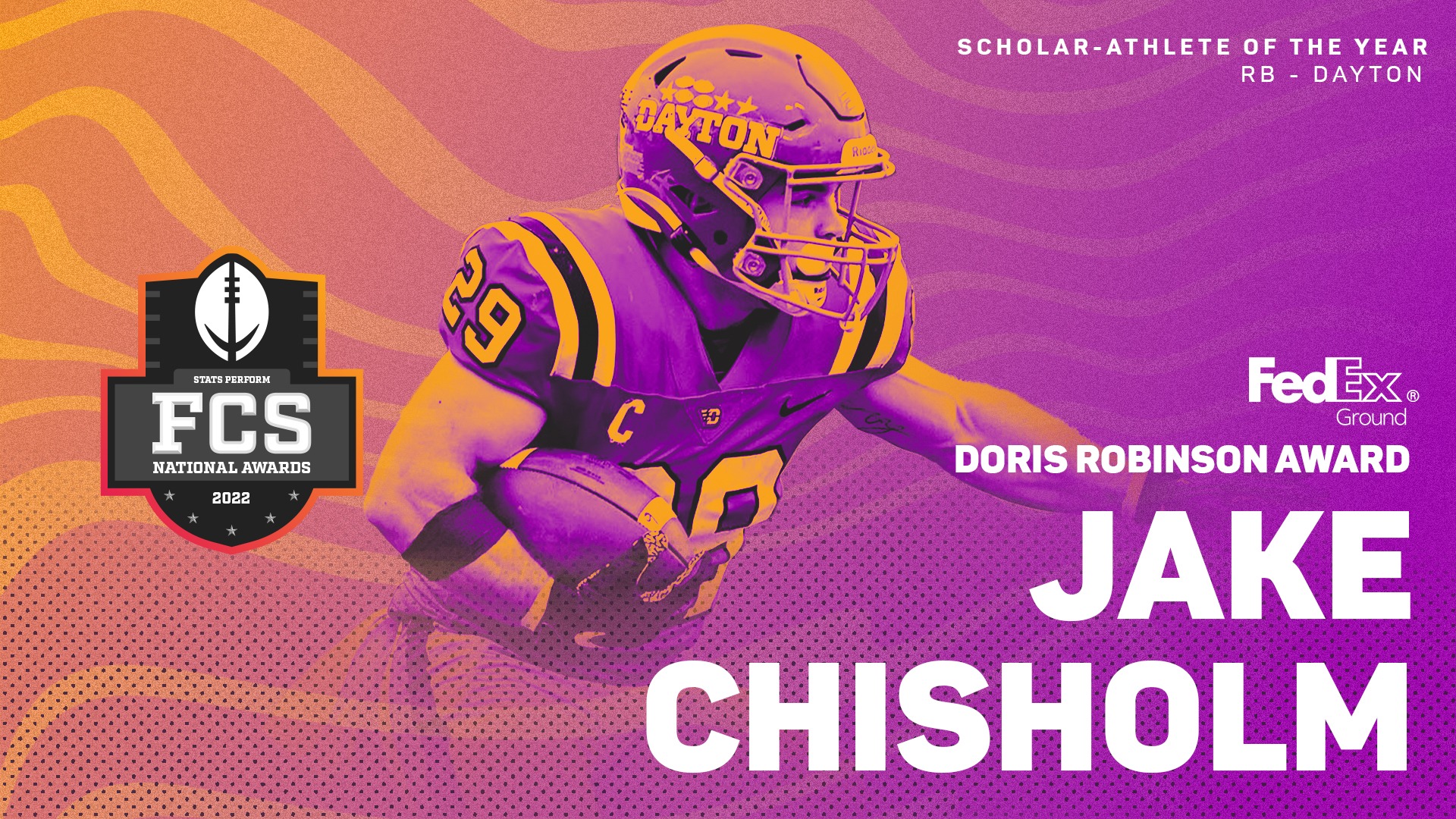 Throughout Jake Chisholm’s Dayton football career, he was consistently among the FCS leaders in all-purpose yards from runs, receptions and returns.

That’s appropriate given how he’s long displayed diversity off the field.

The 23-year-old senior from Union, Kentucky, who will graduate from Dayton later this week, has been selected from 15 finalists – one from each FCS conference – as the 2022 recipient of the FedEx Ground Doris Robinson Scholar-Athlete Award.

Named after the former school teacher and the late wife of legendary Grambling State coach Eddie Robinson, the eighth annual award is presented to an FCS student-athlete who excels not only on the playing field and in the classroom, but in the community and beyond. Chisholm will be honored at the FCS National Awards banquet on Jan. 7 in Frisco, Texas.

Recently retired Dayton head coach Rick Chamberlin says Chisholm is “everything you would want in a college football player” – and it’s true.

Chisholm has a 3.98 grade-point average as a pre-med major with minors in biology and medicine in society. A two-time Pioneer Football League Scholar-Athlete of the Year, he was one of 15 finalists for the National Football Foundation’s William V. Campbell Trophy, considered college football’s highest academic honor.

This season, the 5-foot-9, 191-pound Chisholm had 1,050 rushing yards to become the first Dayton player to surpass the century mark in three different seasons, and he scored 17 touchdowns. While compiling a Flyers’ all-time record 5,603 all-purpose yards, he led the FCS in per-game average in 2019 and ranked second in 2021.

Chisholm’s true calling, however, would appear to be a career in medicine, perhaps he says as a team doctor, but definitely with serving others. He has volunteered 99 hours with the Hospital Elder Life Program, working to prevent hospital-delirium in senior citizens through memory and motion activities.

“I’ve been in rooms with some patients where I’ve sat in there for almost an hour just talking to them, about anything – about their life (or) they ask me questions about what I do,” Chisholm said.

Chisholm has participated in other forms of community service, including the “Rebuilding Together Dayton” clean-up efforts, the Be the Match national bone marrow registry and “Christmas On Campus,” which brings underserved youth to UD to give them a positive start to Christmas.

“It’s more of an internal responsibility – intrinsic motivation,” Chisholm said, “to be someone out in the community that is more of role model, I guess, for the school itself. The University of Dayton, I want to represent the school well just for everything they’ve given for me.”

Majoring in Pre-Medicine with minors in Biology and Medicine in Society, 3.98

Majoring in Psychology (Pre-Law concentration) with a minor in Sports Management, 3.58

Working toward Master’s of Business Administration, 3.80; Undergraduate degree in Management

Working toward double majors in Chemistry and Spanish, 3.95

Working toward Master’s of Business Administration, 3.57; Undergraduate degree in Marketing