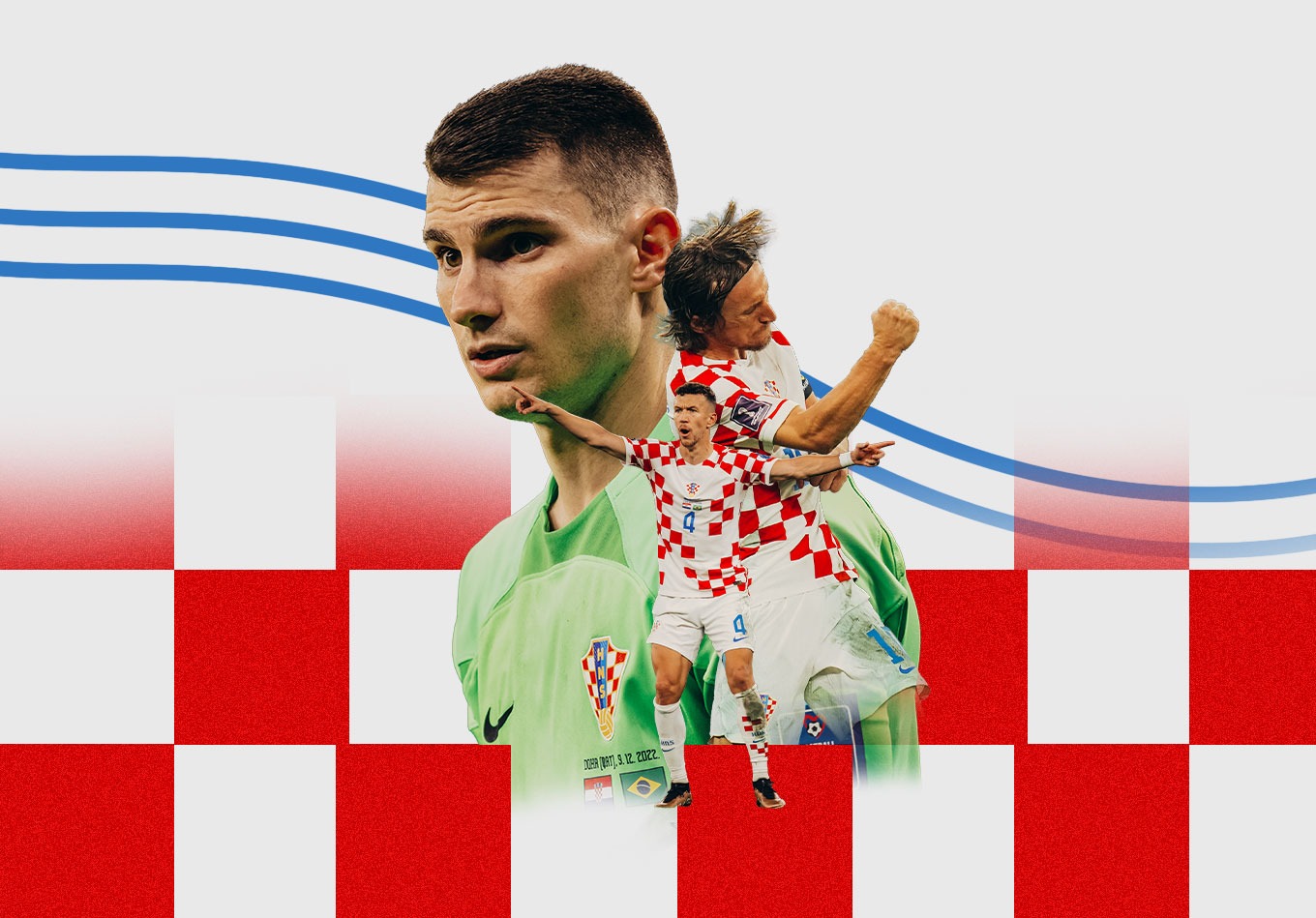 Croatia are just one match away from appearing in a second successive FIFA World Cup final. We take a deeper look at the national team who make clever data-led decisions to enable themselves to compete with the big hitters of international football.

Only Argentina stand in the way of Croatia’s second successive World Cup final appearance. The Croatians have already knocked out Brazil and could become just the second side to eliminate both the Seleção and fellow South American giants Argentina from the knockout stages of the same World Cup, after Germany in 2014.

As one of the numerous World Cup 2022 participants to have a close relationship with Stats Perform and having Opta data at their fingertips, we analyse how they’ve reached consecutive World Cup semi-finals.

No European country has punched above its weight more in world football since the modern-day Croatia returned as a recognised FIFA nation in July 1992. It only took them six years to make a massive impact, with their first-ever World Cup campaign in 1998 ending with a third-place finish.

In fact, of the 14 World Cups and European Championships that it’s been possible for them to participate in since 1996, Croatia have only failed to qualify twice – Euro 2000 and World Cup 2010.

Croatia is only the 30th most populated country in Europe with a shade over four million inhabitants. It’s a notably smaller population than plenty of UEFA footballing nations that have nowhere near as much success on the international stage. Despite this, the Croatians could become just the fourth European nation to reach consecutive World Cup finals after Italy (1934, 1938), the Netherlands (1974, 1978) and Germany (1982, 1986, 1990).

The list of players that Croatia have provided to some of Europe’s biggest clubs across the last 30 years is long and includes top-class talents such as Davor Šuker, Zvonimir Boban, Robert Prosinečki, Niko Kovač, Mario Mandžukić and of course, current players Luka Modrić and Ivan Perišić.

So how do nations like Croatia continue to pull up trees and impress on the international stage without the huge pool of players that previous World Cup-winning nations have at their disposal? Top-level preparation helps. Of course, preparation for matches (and penalty shootouts) relies on both top quality and depth of data to analyse. Croatia use many of Stats Perform’s professional tools, such ProVision, to access Opta data using the latest in AI and machine learning to enable them to make intelligent data-led decisions both pre-match and in-game.

Cutting Off the Threat by Opponents

Croatia are a team who try to build through the lines with a patient and controlled approach, with both Dejan Lovren and Joško Gvardiol comfortable as ball-playing central defenders. But the absolute key to Croatia’s style is the central midfield trio of Modrić, Mateo Kovačić and Marcelo Brozović. At times it may seem that all three are attached to one another by a rope, working in tandem to support different areas of the pitch and constantly breaking up play and exchanging short passes.

Most of Croatia’s statistical leaders for metrics at this World Cup are one of that trio. Brozović leads for successful passes (419) and open-play attacking sequence involvements (22), he and Modrić have made the most ball recoveries (39), Kovačić has made the most tackles (15) and has the highest expected assist total (1.09), while no player in the Croatia squad has created more open-play chances than him and Brozović (five).

The usual wide midfielders – Perišić and Mario Pašalić are very disciplined and offer defensive support to full-backs Borna Sosa and Josip Juranović. This was seen against Brazil in the quarter-finals, as they doubled up on the South American wide players: Sosa and Perišić on Raphinha and Antony (who came on in the 56th minute) and right-sided Juranović and Pašalić doubling up to stop the threat of the skillful Vinicius Junior and later on his Real Madrid team-mate Rodrygo. The same works in Croatia’s attacking phases of play, with the full-backs working in mini-teams with their wide midfielders to provide support in the final third of the pitch.

One of Croatia’s major successes in the quarter-final against Brazil was snuffing out the threat of Vinícius Júnior, as they blocked the Brazilian passing lanes to the 22-year-old and forced him into areas of the pitch that made him less threatening. He only received 14 passes from his team-mates in his 64-minute appearance, and many of his 22 touches were in areas that he didn’t want to be in – farther up the pitch and more central than usual, which nullified his threat to progress Brazil up the pitch with his ball-carrying talents.

Like most fortunate enough to reach this stage, it’s true Croatia used up some of their luck against Brazil. Neymar’s goal in extra time came from Brazil’s 10th shot on target in the match, and Croatian goalkeeper Dominik Livaković had one of the games of his life with 10 saves while conceding just once – that superb Neymar individual strike – from an expected goals on target total of 3.2.

It’s obvious that the biggest threat to Croatia’s chance of reaching another World Cup final comes via Lionel Messi. The Croatians will need to find a plan and execute it as successfully as they did against Vinícius Júnior last time out.

They managed to completely stifle the threat of Messi in their 2018 World Cup group game against Argentina, where they restricted him to a single shot off target in 90 minutes, and it was the game in which the Argentina legend had the fewest touches of the ball (49) and attempted the fewest passes (24) at the tournament. In fact, of every World Cup game that Messi has played more than 70 minutes in, that 2018 meeting with Croatia saw him have the fewest touches of the ball and joint-fewest shots.

Both Modrić and Brozović were in Croatia’s central midfield that day. Can they have as much success this time around?

Messi often drifts wide to the right to pick up the ball, which might see forward Andrej Kramarić drop deeper to support Sosa and Perišić in taking out the opponent’s main threat. So far at this World Cup, Kramarić has found himself dropping much deeper on the right side than the usual striker would. In the last game against Brazil, none of his 33 touches were in the opposition box, with 17 of these on the right side in the opposition half of the pitch (52%).

Croatia are a team that like to get the ball out wide and send in crosses. Of all the teams at the 2022 World Cup, only Mexico (19.7) have attempted more open-play crosses per 90 minutes than Croatia (18.2), while just France (19) and South Korea (11) have created more chances than Zlatko Dalić’s side (10) in this manner.

Thirty-eight of Croatia’s 103 open-play crosses (37%) have been via full-backs Sosa (18) and Juranović (20), and no Croatia player has been on the end of the team’s 28 successful crosses more than Perišić (five).

Croatia commonly used open-play crossing via their full-backs to their advantage at the last World Cup, and one of the goals that helped them reach the final came exactly in this manner – full-back Šime Vrsaljko’s right-wing cross was cleverly converted by Perišić running inside from the back post to equalise in the semi-final versus England. In that tournament four years ago, Croatia were also one of the most prolific crossing teams from open play, with only Germany (26.3) and Portugal (17.3) attempting more per 90 minutes than they did (16.8).

In this year’s quarter-final versus Brazil, we saw Croatia utilise their strength out wide, with only 18.7% of their attacking-half touches coming in the middle third of the opposition half and the remaining 81.3% coming out wide. Compare that to Argentina’s 34.4% central figure in their last match against the Netherlands and we have a clear difference in attacking distribution ahead of this semi.

Argentina’s strength is via Messi’s direct running and exceptional ability to thread a pass through opposition defences, which has contributed to them making less than half (8.8) the average of open-play crosses per 90 minutes than Croatia at this tournament.

There’s little doubt that this will be Modrić’s last World Cup. The Real Madrid midfielder will be a few months shy of his 41st birthday when the 2026 finals in North America arrive, but his experience at Qatar 2022 has been vital to Croatia’s success.

Modrić has made the most World Cup appearances (17) and most appearances at major tournaments (30) for Croatia. He’s started all five of their 2022 World Cup matches and could become only the fourth player to start six matches at a World Cup aged 37 or older, after Brazil’s Nilton Santos in 1962, Italy’s Dino Zoff in 1982 and England’s Peter Shilton in 1990.

Arguably their three key players in their side could be playing in their last World Cup, with 33-year-olds Perišić and Dejan Lovren also nearing the end of their playing careers. However, this tournament has proved that there’s some fresh talent in Croatian football with 20-year-old defender Joško Gvardiol being one of the standout stars of this World Cup.

Including all added time and extra time, Croatia have played the most minutes at this tournament so far (556 minutes, 57 seconds), closely followed by Argentina on 550 minutes and 21 seconds. The Croatians hold the World Cup record for their 778 minutes and 42 seconds played at the 2018 tournament, but with at least 180 minutes of football still to play at this tournament when considering the semi-final, plus either the third-place playoff or final, there’s a fair chance Croatia could break that record once again at Qatar 2022. How will those minutes impact the older legs in the squad? We await the answer.

With Croatia’s recent history of extra time in knockout stage matches at international tournaments, there’s every chance this semi-final could go to a penalty shootout.

Eight of Croatia’s last nine tournament knockout-stage matches have gone to extra time and four of their last six KO games at World Cup finals have gone to penalties. Luckily for Croatia, they have another goalkeeper who is great at saving them.

With his save on Rodrygo in the Brazil shootout to add to the three in their last 16 tie versus Japan, Croatian Dominik Livaković became just the third goalkeeper to save as many as four penalties in shootouts at a single FIFA World Cup tournament, after fellow Croatian Danijel Subašić in 2018 and Argentina Sergio Goycochea in 1990.

Having the data at their fingertips on historical placement of penalties by players may have helped Livaković make three saves against Japan in the round of 16 to progress in the shootout. Those three saves equalled the record of Subašić (Croatia vs. Denmark in 2018) and Ricardo (Portugal vs. England in 2006) of penalties kept out in a World Cup shootout.

Croatia have won all four of their penalty shootouts at World Cup tournaments, knocking out Japan and Brazil in the last 16 and quarter-finals in 2022 respectively. The only downside ahead of this game is that the only nation to win more penalty shootouts in the competition are opponents Argentina (five).