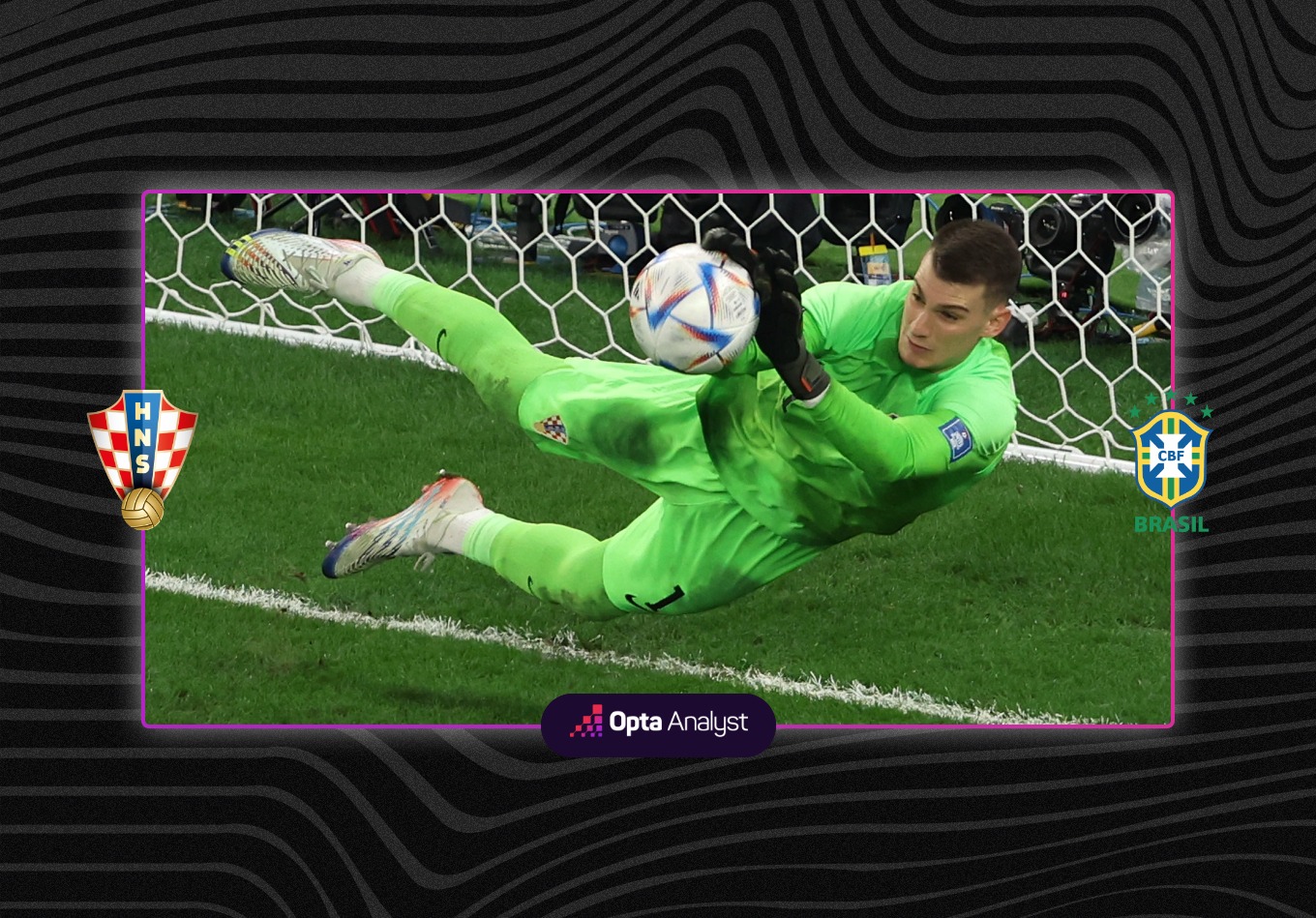 Dominik Livaković – fresh off the back of saving three spot kicks just four days ago – was the hero once again as Croatia stunned tournament favourites Brazil on penalties. Four times Croatia have been in a World Cup shootout and four times they have prevailed, going level with Germany for the most shootouts won while maintaining a 100% record.

It was Croatia themselves who started the game brighter. Their experienced midfield trio of Marcelo Brozović (35 successful passes), Luka Modrić (35) and Mateo Kovačić (28) saw plenty of the ball and were three of Croatia’s top four for total passes completed in the opening 45 minutes. For Brazil, their top four for successful passes were their four defenders. Granted, that’s a fairly rudimentary measure, but it showed where on the pitch each team were enjoying possession.

That those three Croatian players were heavily involved was no surprise. But what was perhaps surprising is how effective and brilliant Josip Juranović was at nullifying first Vinícius Júnior, and then Rodrygo. Only two full backs in this World Cup have clocked up over 300 minutes and not yet lost a single attempted challenge: Juranović and Luke Shaw.

Juranović was exceptional driving up field as well, particularly in the first half, and his influence down the right-hand side is evident in Croatia’s attacking thirds map.

With Ivan Perisic on the other side, Croatia looked to progress the ball down the flanks, but – as they have throughout the tournament – really lacked a central presence.

Despite attempting 139 passes in Brazil’s third, they registered just 18 touches in the opposition box. And ultimately, for all their competitive and combative thrust, they didn’t force Alison into a single save in 90 minutes.

Contrast that to Brazil’s map above, who were a threat from all across the pitch.

Richarlison proved a good focal point and despite completing just seven passes all game, four of them were chances.

Somehow without playing vintage Brazilian football, the Seleção forced Dominik Livaković into 11 saves in the game, not only the most of any Croatian goalkeeper in a single World Cup match but the most of any goalkeeper since Tim Howard made 15 in 2014 against Belgium, a World Cup record in recorded history.

But Brazil could not convert any of these in regulation time, despite three of them being big chances.

And so, as is customary for major tournament knockout games, Croatia took the game into extra time. In a run going back to Euro 2008, eight of Croatia’s last nine knockout stage games at major tournaments have gone to extra time, with the exception being the 2018 World Cup final. They’ve now progressed in all five of those games in the World Cup.

Neymar provided the game’s spark. Exchanging neat one-twos with Rodrygo and then Lucas Paqueta, he was a flash of yellow darting through the Croatia defence, rounding Livakovic to finish. It was the goal Brazil craved and the goal to take him level with the great Pelé for all-time goals for the Brazil men’s national team. It was also the goal to send Brazil through.

Except Croatia never die. Modric, making his 30th major tournament appearance, the first player to hit that total for Croatia, was everywhere. He completed the most passes and had the most touches of anyone on the pitch. His swansong continues.

Modric started the move that led to Bruno Petković, with what was Croatia’s first shot on target in the entire game, pull them level with a deflect strike at the death.

Croatia are deadeye when it comes to penalty situations, and they were again. Brazil made the rookie error of leaving their best penalty taker, Neymar, last and he wouldn’t even get the chance to have a go, with Rodrygo’s opening penalty miss proving crucial.

The entire population of Croatia would only be third-highest populated city in Brazil. How they keep churning out results like this is unfathomable. But on they go, and they’ll meet the winner of tonight’s Netherlands vs. Argentina match in the semi-final.