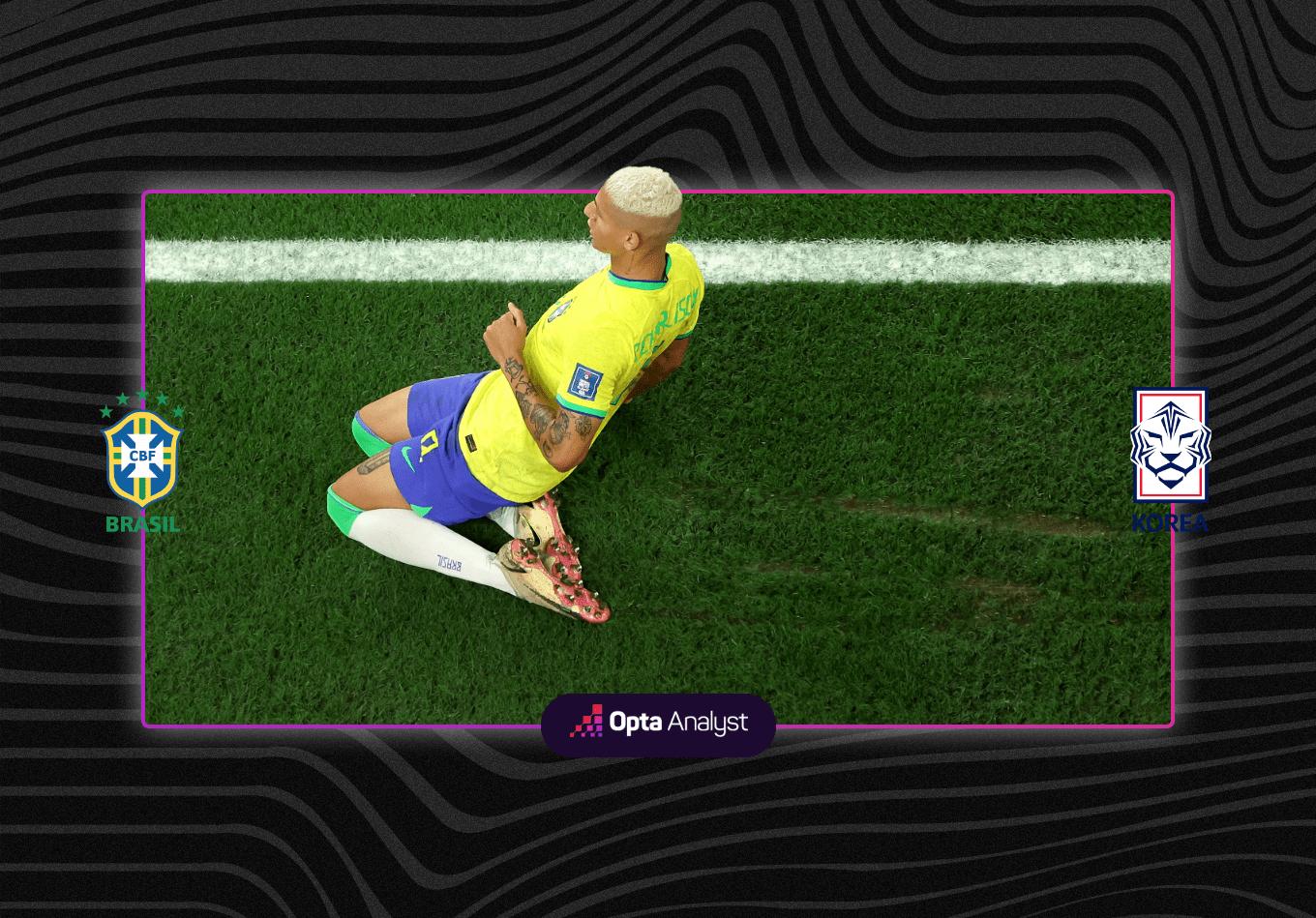 It doesn’t matter whether you’re the five time world champions [hi, Brazil] or a nation whose best performance in the World Cup is reaching the semi-finals on home soil in 2002 [hey, it’s South Korea], witnessing your star man and national icon suffering a nasty injury is a worrying scenario. Korea Republic had to wait nervously to see if Son Heung-Min would be fit for Qatar 2022, while Brazil lost Neymar to a full-scale Serbian ankle assault in their opening game of the tournament. Fortunately both men lined up for their nations in this last 16 ties. Brazil were huge favourites to progress to a quarter-final against Croatia but some fancied South Korea as a potential banana skin for the tournament favourites. They were wrong.

Brazil led by two goals only 13 minutes into the game. The first was an aesthetically wondrous finish from Vinícius Júnior after electric work from Raphinha on the right flank. The second came from the penalty spot after a reasonably soft decision based a kick on Richarlison’s foot. The restored Neymar duly rolled home the spot-kick; no signs of discomfort, plenty of ecstasy. At 12:17 it was the second earliest Brazil had led 2-0 in a World Cup. Had Neymar run up to the penalty at pace like, say, Dean Saunders in the early 1990s, then it could have broken their record of 12:16 set against Costa Rica in 2002. But whatever your views on stuttered runs and/or Dean Saunders, it took Neymar one goal nearer a major milestone.

Before the half-hour it was 3-0, Richarlison finishing a breathtaking one-touch move that started with him juggling the ball on his head and ended with a goal that ensures Thiago Silva is oldest player to assist a goal in World Cup history. At this point Richarlison could be well on the way to contesting the goal of the tournament competition all by himself. This was the sort of hyper-Brazilian action you were told about ahead of World Cup 94 by people who could remember Spain 82, but didn’t get to see. The Korean defence seemed intent on engaging in a risky role-playing game called “what happens if we defend one-on-one against arguably the most talented front four in international football?” Yeah, not so well.

Want another goal? Fine. It’s the 36th minute and even 1966 World Cup winners West Ham United are getting in on the action, Lucas Paquetá stroking home another beautifully developed move, but another instance of the Korean defence being ripped apart at will. It was only the second time that Brazil had ever scored four goals in the first half of a World Cup game, and they had three decent chances in injury time to make it five or six. Brazil danced, miserablists bristled.

In the stadium made out of shipping containers it was an absolute bin fire of a first half from South Korea.

Would the subsequent 45 minutes live up to the first? What’s Korean for “go and win the second half lads?”

Incredibly, South Korea would go and do just that. Unless you’re Arsenal playing at Newcastle in February 2011 there’s little concern when defending a 4-0 lead and, despite some occasional but typically dreamy moves, Brazil were happy to see the game out, getting a bit of rest ahead of their Croatian encounter on Friday. The Koreans even scored one of the best consolation goals you’ll ever witness, Paik Seung-Ho lashing in a left-footed screamer from outside the box.

Their advantage reduced to three goals, Brazil reacted in the most sensible way imaginable, substituting Alisson for third-choice goalkeeper Weverton, meaning they became the first team to use 26 different players in a single World Cup, and the ninth nation to use three goalkeepers in a single edition of the Global Jamboree™️.

In the end, the second half was a process for Brazil, a period to get through without picking up injury or suspension and they did just that. The first half, though, will live on as a vivid memory of just what this team can do when they ease through the gears. They can expect Croatia to approach the quarter-final in an entirely different way to South Korea, but the 2018 World Cup runners-up will be playing on a knife-edge. One slip against this Brazil team and they can ruin you in an instant.