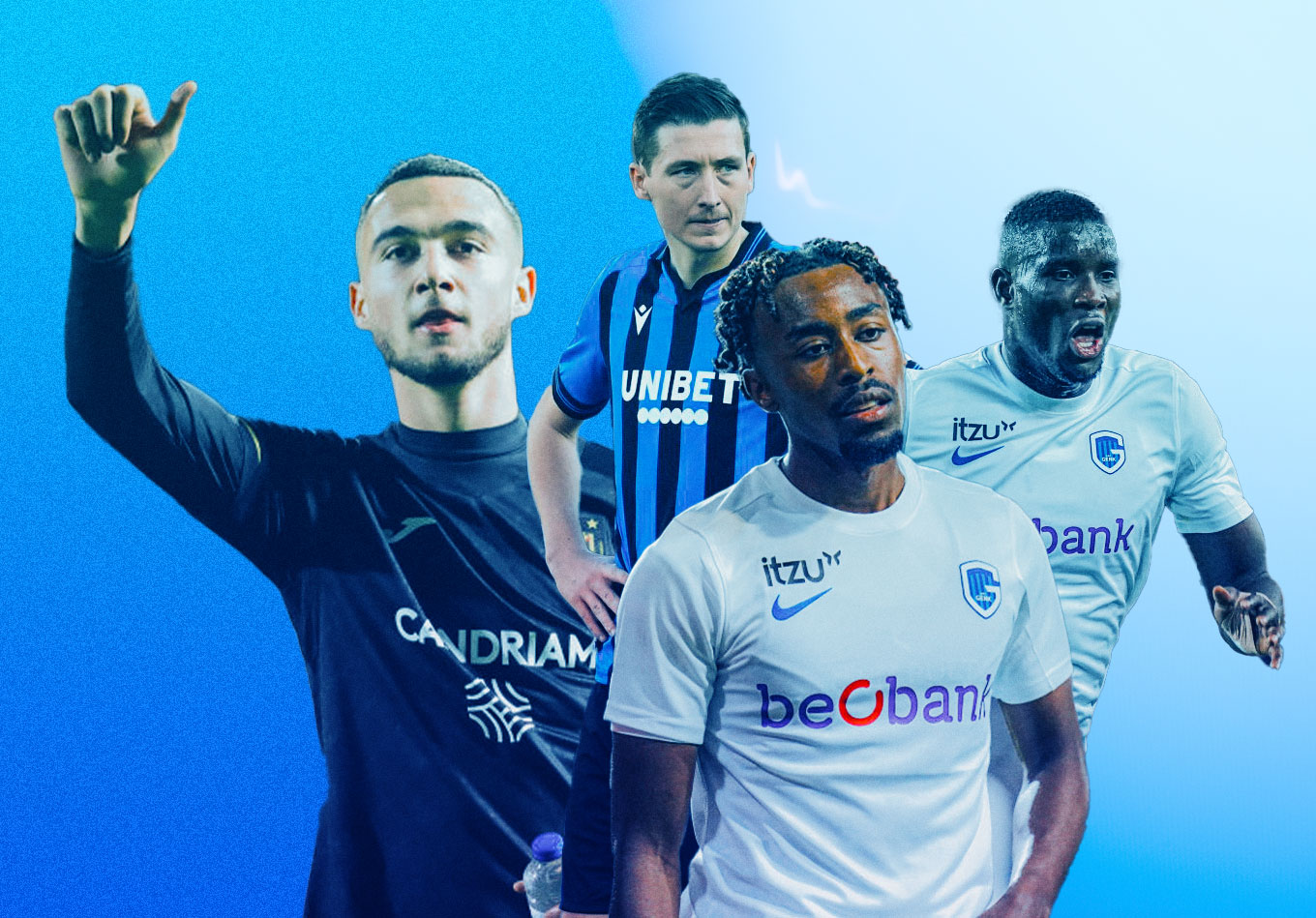 With the Belgian Pro League set to resume after a mid-season break for the World Cup, our esteemed team of Opta data editors look back at the major talking points ahead of its return.

These are the memorable lyrics of one of the most popular Belgian songs of all time: ‘Mia’ by Gorki. Elvis could easily be replaced in these lyrics by Belgian Pro League stalwart Hans Vanaken.

Year after year, Vanaken is linked to high-profile moves away from Belgium, like the rumours of a move to Serie A giants Internazionale in 2016, Lazio in 2018, Spanish club Sevilla in 2019 and Bundesliga team Borussia Mönchengladbach in 2020. But those moves never materialized, and the 30-year-old remains a Pro League player at Club Brugge, the club he joined from Sporting Lokeren in 2015.

After 351 Belgian top-flight league appearances, he has scored 104 goals, making him the highest scoring midfielder in the competition across the 21st century, while only five players – all strikers – have scored more than he has, overall.

The 2022-23 campaign is his 10th in the Belgian top-flight, and it’s been another vintage Vanaken season so far.

As well as contributing five goals, Vanaken has completed the fourth-most passes in the competition this season (967) but the most by any player that’s not a centre-back. He covers vast areas of the pitch with the ball at his feet, with a league-high 519 ball carries and the highest carry distance of 4,787m of any central midfielder.

His involvement in Club Brugge’s attacks is also more prolific than any other Pro League player in 2022-23 so far. He’s created the most open-play chances in the competition (29), the most secondary chances created (24) and has played a part in a league-high 101 unique open-play sequences that have led to a shot. In comparison, world class Belgian star Kevin De Bruyne has tallied 95 involvements in the Premier League for Manchester City this season. Will Vanaken ever follow his lead and move across to one of Europe’s top five leagues before it’s too late?

It could be argued that the Belgian top-flight is one of the best known to produce young talent across Europe, with now-renowned stars like Thibaut Courtois, Kevin De Bruyne, Youri Tielemans and Romelu Lukaku coming through the ranks of Belgian clubs in the past. More recently, we’ve seen players such as Arthur Theate (Rennes), Anass Zaroury (Burnley) and Charles De Ketelaere (Milan) move across to other European clubs.

However, the same can not really be said for Belgian coaches. Across the last few years, just one Belgian coach of note has made the successful step from the Pro League to one of Europe’s big five European leagues – Phillippe Clement joining Monaco in January 2022 after two back-to-back Pro League titles with Club Brugge.

This issue is two-fold. On one hand, managers aren’t given a lot of time to impress in the Belgian top-flight, while on the other hand there seems to be a lack of originality or new ideas when appointing a new head coach. The current Pro League campaign has resembled a merry-go-round when it comes to the appointment of men in charge of clubs.

So far in 2022-23 we have seen Bernd Storck, Dominik Thalhammer, Felice Mazzu and Edward Still all given new jobs within the Pro League after being fired by other Belgian clubs earlier in the campaign.

KV Kortrijk’s board have been particularly ruthless when it comes to head coaches. Karim Belhocine, who was KVK manager for just 30 games, was replaced after six matchdays by Adnan Custovic, who himself got fired and replaced by Storck during the World Cup break, meaning that Kortrijk will be led by at least three different managers this season – their highest over a single campaign since 2015-16 when Johan Walem, Patrick De Wilde and – surprise, surprise – Belhocine were all given a chance to lead the club.

There will undoubtedly be more movement on the merry-go-round before the 2022-23 season ends, but we await to see who’s next to move.

After three seasons of black-and-blue reign from Club Brugge, the Pro League looks set for a new champion at the end of this season. KRC Genk are clear favourites for the 2022-23 title, with them holding a 10-point lead at the top of table at the halfway point of the regular season, while breaking all sorts of records.

Their 46-point tally after 17 league games thanks to 15 wins and a draw (with one loss) has only been achieved on six occasions by clubs before this season in the Belgian top-flight since 1948. The last team to do so were RSC Anderlecht in 2003-04.

It’s hard to overstate how dominant Genk have been in the first half of this Pro League season. They’ve found themselves in a losing position for just 30 minutes across the whole of 2022-23, they won their final 10 league games before the break, smashing their own club record in the process, while they are now 15 games unbeaten in the competition before the resumption of action this month. Genk themselves were the last time to go on such a run in the competition back in 2018.

Although manager Wouter Vrancken plays a big role in this success, there is plenty of quality in the squad and there have been two standout players…

Nigerian striker Onuachu is the current top scorer in the Pro League, continuing his excellent form from the last two campaigns in Belgium. At 6-foot-7, he’s a physically imposing forward who’s netted 76 goals in 109 league appearances for Genk so far, including 13 in 14 in 2022-23. This is the third successive season that Onuachu is Belgium’s most prominent attacking force.

The last two seasons have seen Onuachu’s form in front of goal make people stand up and notice, with an above average shot conversion rate and outperformance of expected goals, but 2022-23 is even more remarkable.

The Genk striker has scored an astonishing 42% of his shots (13/31) and is averaging 1.37 goals per 90 minutes (1.06 excluding penalties). Nine players have attempted more shots on target than he has (15), while he’s outperformed his non-penalty xG by nearly four (3.8) – last season he scored four goals less than his npxG suggested he should have (15 goals from 19 npxG).

Arguably the biggest sensation in the Pro League this season has been Mike Trésor, a Belgian-born midfielder who started his career in the Netherlands and returned to his home country in the summer of 2021. Although his first season wasn’t bad with seven assists in 30 games, he’s blossomed into a revelation in 2022-23.

Trésor has already registered an incredible 13 assists this season, more than any other player across the 10 biggest UEFA-ranked leagues. In fact, the only players that have come close to him are Cody Gakpo (12) and Lionel Messi (10) – not bad company to keep. Whilst he also leads the expected assists ranking (5.8), his overperformance of just over seven suggests a mix of fantastic finishing and a lot of good luck on his side.

It’s very well possible that Trésor will finish this season as Europe’s assist king, as he’s consistently been creating chances for team-mates and is Genk’s set-piece taker. He’s created 59 chances in the Pro League this season – at least 20 more than any other player, with over half of these coming from set play situations (31).

Mark van Bommel is certainly a man that powers the ‘new-manager-bounce’ theory. After a fantastic start at clubs he manages, he looks like the ideal man to help a team surge up the table with a run of strong results. Then the bounce stops, and the decline begins.

The three appointments of Mark van Bommel look all quite the same; at PSV, VfL Wolfsburg and now Antwerp, he starts amazingly well but when the wins go away there’s not much left to be enthusiastic about. His spell at PSV ended up stretching to 18 months, but he was to oversee Bundesliga club Wolfsburg for only 13 games and three months.

At PSV, van Bommel started with a phenomenal 13 wins in his first 13 games in charge and orchestrated eight clean sheets and 3.5 goals per game over this run. However, he oversaw the same tally of wins (13) in the remaining 21 league games of the Eredivise season (D5 L3). The fans weren’t happy with the style of play that Van Bommel forced the side to play, with the ex-midfielder very defensively-minded. He was to last just 17 games into the 2018-19 season before being removed from the role.

His next job came at Wolfsburg in Germany, where he led his new side to four wins in his first four Bundesliga games in charge of the club and to the top of the table. However, the cracks soon began to appear and after a run of one point in five games (D1 L4), Van Bommel was sacked just 115 days after his appointment.

Van Bommel would have been hoping for a case of third time lucky in Antwerp, and his tenure began in the best possible way with nine successive victories. However, since then, Royal Antwerp have won just one of their following seven matches (D3 L4).

The opening nine games that produced nine wins also saw them outperform their xG at both ends – an xG overperformance of 7.3 in attack and 3.2 in defence. Since then, both have swung the other way and the inevitable relapse has begun. You can’t outrun xG forever…

They might be the record champions of Belgium, but 2022-23 certainly isn’t a season that Anderlecht will be adding to their tally of 34 top-flight league titles. They currently find themselves in 11th place in the Pro League, and much closer to the bottom of the league (nine points) than they are the top (26 points).

Despite Jan Vertonghen’s return to Brussels to lead the Anderlecht defence, it’s a youth product of the club that looks the new natural leader of the Purple and White central defence: 19-year-old Zeno Debast.

Anderlecht have produced a host of exciting talent from their academy in recent years, with Romelu Lukaku, Youri Tielemans, Leander Dendoncker, Jérémy Doku and Albert Sambi Lokonga the most notable examples. With the majority of their products to make it onto the big stage being midfielders and forwards, developing defenders to step up and become European powerhouses hasn’t been such a regular occurrence – the last most probably being Vincent Kompany in 2006.

Of course, the ‘new Kompany’ label is one that’s already been attributed to Zebast by many, but so far, he’s looking like a potential national team star for years to come.

Just like Kompany, Debast excels in possession of the ball. Of players to play at least 1,000 minutes of Pro League football for Anderlecht in 2022-23, only defensive partner Wesley Hoedt (60.9) averages more successful passes per 90 minutes than he does (50.1), while he’s among one of the best ball carriers in the competition.

Debast has progressed the ball further upfield with ball carries than any other player in the competition this season (4,718m) while only Boris Lambert at KAS Eupen (264) has embarked on more progressive carries over five metres in distance than he has (259).

The Anderlecht youngster was unsurprisingly called up to the Belgium squad for the 2022 World Cup in Qatar, but unfortunately couldn’t get any playing time before they exited at the group stage. With Belgium’s ‘golden generation’ now nearing the end and Vertonghen (35 years old) and Toby Alderwerield (33 years old) unlikely to play in another tournament, Debast could be the future of Belgium’s central defence.

Until then, Debast will be hoping to make an even bigger name for himself at Anderlecht, following in the footsteps of the player he has so often been compared to: Kompany. Back in 2003, Kompany made his RSC Anderlecht debut at 17 years, 121 days old, while Debast did so at 17 years, 190 days in May 2021. The manager who gave him his first minutes in the Belgian Pro League? None other than Kompany himself.