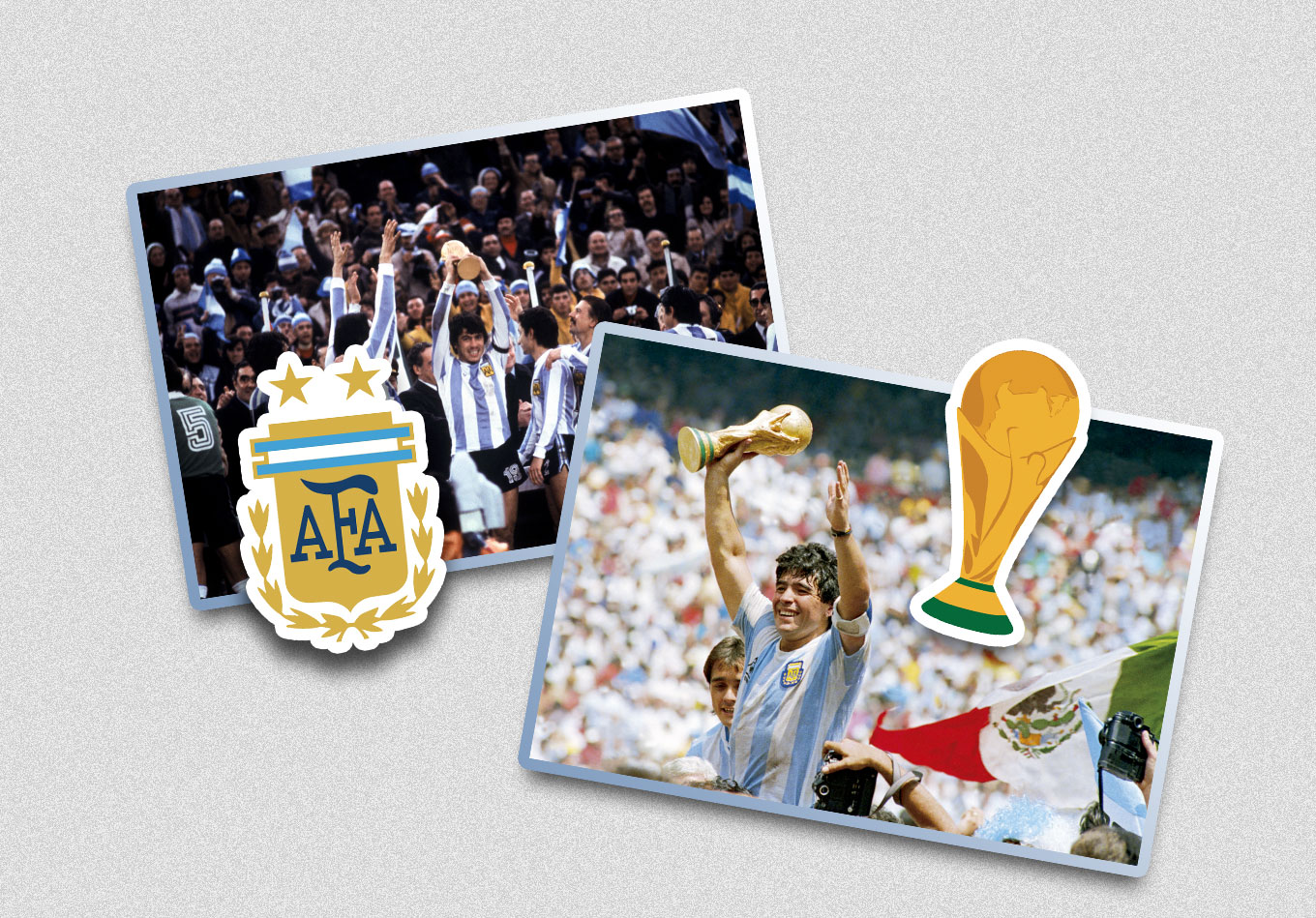 Looking Back: The Data Behind Argentina’s World Cup Wins and Heartaches

Known as one of the great entertainers of the tournament, Argentina have won two FIFA World Cups and played in three other finals. Through a deep dive into the data, we look back at Argentina´s five best World Cup performances.

Argentina and Uruguay confirmed their pre-tournament favourite tags by reaching the final, winning all their matches along the way, including resounding semi-final victories (Argentina beat USA 6-1 and Uruguay beat Yugoslavia by the same scoreline).

By 1930 the duel between the two Rio de la Plata teams was already a derby. The first international match between Argentina and Uruguay was played in 1902, and they faced each other almost every year thereafter. Between 1916 and 1929, they contested most of the finals of the first twelve editions of the South American championship, now known as the Copa América.

Uruguay had enjoyed recent international success, having won the gold medal at the 1924 Paris and 1928 Amsterdam Olympic Games, beating the Argentinians in the final of the latter.

A unique disagreement clouded the build-up to the final of World Cup 1930, with both teams wanting to play with their own ball. Referee Jean Langenus diplomatically intervened, perhaps aided by his experience as a journalist for the German magazine Kicker. The first half (in which Argentina took a 2-1 lead) was played with a ball chosen by the visitors, while the second half (in which the home side came from behind to win 4-2) was played with the Charrúa ball.

Although they lost the final, the 1930 World Cup was Argentina’s most productive World Cup in terms of goals. They scored 18 in five matches, averaging 3.46 per game.

Ball-based disputes aside, the first World Cup was not without further controversy. The Argentinian midfielder Luis Monti later confessed that he had received death threats ahead of the final from the Uruguayans. Interestingly, in the next World Cup, Monti would star for Italy as a nationalized Azzurri as they won the tournament, alongside fellow compatriots Atilio Demaría (who also played in the 1930 final), Raimundo Orsi and Enrique Guaita.

The Long and Winding Road

The Albiceleste had shown regional power by winning 12 editions of the Copa América and even some minor international tournaments, such as the 1964 Nations Cup where they beat Pele’s Brazil and Bobby Moore’s England. They needed a World Cup, however, to prove their status as a footballing power, and hosting the tournament provided the perfect opportunity.

Argentina had a tough route to the final, beating Hungary and Platini’s France in the first round. Despite this, they had to move from Buenos Aires to Rosario after being defeated 1-0 by Italy, who finished top of Group 1.

With four goals in three matches, Mario Kempes came into his own. He scored two goals in a 2-0 win over Poland and another two in a 6-0 win over Peru, which was crucial because anything less than a four-goal winning margin would have eliminated the hosts.

The final against the Netherlands was as tough as it was vibrant, with 43 shots and 64 fouls between the two sides. Kempes gave Argentina the lead in the first half, but the visitors equalised in the second half through Dick Nanninga and could even have won it in the last minute of regular time when Rob Resenbrik’s shot hit the post. In extra-time, it was Argentina who cut loose with goals from Kempes and Daniel Bertoni, as they claimed the trophy for the first time in their history. In doing so, they became the fifth team (after Uruguay, Italy, England, and West Germany) to be both hosts and world champions and the third team from South America to win a World Cup.

Despite not scoring in his first three games and taking 19 shots, Kempes topped the 1978 World Cup scoring charts with six goals in his final four games and 22 shots in total (1.7 xG).

Although historically criticized for not keeping pace with the European game, the Albiceleste won the tournament and led the competition in several key metrics. Off-the-ball, they were first in ball recoveries (55 per game), and second in PPDA (7.4, compared to the tournament average of 8.8).

Going forwards they ranked second for expected goals (1.4 xG per game, compared to 1.1 on average), second in aerial duels in attacking areas (59%), second in average possession (53%) and first in possession of the ball with the game tied (54%).

Argentina left qualifying for the 1986 World Cup until the last minute, only securing their place at Mexico ’86 on the last day of the CONMEBOL qualifiers. Once they were there though, Carlos Bilardo’s team were peerless, becoming the first Argentine team to remain unbeaten in a World Cup (5W 1D) on their way to lifting the Jules Rimmet trophy.

In fact, Bilardo’s team only trailed for 27 minutes (against Italy in the group stage) across the entire tournament.

No matter how you look at it, the 1986 World Cup in Mexico will be remembered for the historic performance of Diego Maradona who after a two-year stint at Barcelona, was now firmly entrenched at Napoli.

However, Diego was surrounded by a supporting cast, with key contributions coming from Jorge Valdano (one assist and four goals on 1.6 xG), Jorge Burruchaga (two goals and two assists) and José Luis Brown who averaged 8.4 clearances per game and led the tournament ranking in that category among those who played at least four games.

Maradona’s influence on his country’s World Cup success in 1986 cannot be overstated though – of Argentina’s 14 tournament goals, he either scored or assisted ten of them. He remains to this day the only player in the history of the World Cup to score and assist at least five times during a single edition of the competition.

In addition, Maradona topped the 1986 charts for chances created (27), shots (26), dribbles completed (53 – second was the Soviet Union’s Ivan Yaremchuk with 16) and assists with five.

The incredible thing is that he did all this while being the most fouled player all-time in World Cup history. Maradona was fouled 53 times across the seven matches (7.6 average).

If we add up all of the fouls Maradona suffered across the course of his World Cup career, we get to 152 fouls suffered across 21 games, at an average of just over seven per game.

To put that number into context, Brazil’s Jairzinho, who is the second most fouled player since World Cup records began, drew 64 fouls across 16 matches, at an average of four per game.

Mexico 1986 is the Albiceleste’s second, and so far, last World Cup glory.

Argentina travelled to Italy looking to defend their title as world champions, but things were difficult for them from the beginning. A 1-0 defeat to Cameroon stunned them in their opening match. This was no smash-and-grab performance either: the Cameroonians outshot Argentina 15 to six and accumulated more expected goals (0.8 to 0.3 xG).

Argentina bounced back with a 2-0 win over the USSR and ended up qualifying as the best third-placed after drawing with Romania (1-1). In the round of 16, they beat Brazil thanks to a goal from Claudio Caniggia after a Maradona assist, in a match in which La Canarinha were superior (13 to six in shots, 61% to 39% possession).

Argentina’s backup goalkeeper Sergio Goycochea stole the show in the quarter-finals. Replacing Nery Pumpido who was injured against the USSR, Goycochea was the hero in the penalty shoot-out against Yugoslavia, saving two.

The Notti Magiche (Magic Night) came against Italy in the semi-finals. The Tifosi whistled the Argentine anthem and the Azzurri took the lead with a goal by Toto Schillaci (the tournament’s top goalscorer with six goals). With the Italian goalkeeper Walter Zenga holding the World Cup record for the most minutes without conceding, it was set to be an uphill battle for the Albiceleste.

The final between Germany and Argentina is often cited as the most cynical and lowest-quality of all World Cup Finals.

With a team ravaged by injuries and suspensions, Argentina came out to defend against Germany, playing for penalties. They managed just one shot to Germany’s 23, and the only goal of the contest arrived in the 85th minute when Mexican referee Edgardo Codesal awarded a penalty to Germany, after a foul on Rudi Völler by Roberto Sensini. Argentina would have to settle for runners-up medals this time.

The fact that Argentina reached the final was an achievement in itself. They only led for 85 minutes across their seven games, accumulated just 3.0 expected goals across 72 shots (10.3 per game, the fifth lowest-scoring average in the tournament) and scored just five goals in seven games.

“We have to cross the Rubicon” was coach Alejandro Sabella’s message to his players before the quarter-final against Belgium. Argentina had not been able to advance from that stage since Italia ‘90.

In the group stages, Lionel Messi had top-scored for his team with four goals, including one from an impossible 0.03 xG shot against Iran that helped his side top Group F:

In the last 16, Argentina were forced into extra-time against Switzerland, but Messi delivered his only assist of the tournament to Angel Di Maria, a driving run at the heart of the Swiss defence opening up space for Di Maria on the right to sweep home.

Sabella’s side then crossed the Rubicon against Belgium, thanks to an early goal from Gonzalo Higuaín and their third clean sheet in five games. Belgium had few very few chances across the 90 minutes, accumulating just 0.4 xG from ten shots.

The semi-final encounter against the Netherlands was a cagey affair, ending 0-0 and going to penalties. “Today you’ll become a hero,” Mascherano prophetically said to goalkeeper Sergio Romero.

The 2014 Argentina team was more solid in defense than it was effective in attack, something that is reflected in the data. Javier Mascherano would end up as the player with the most tackles (30), Ezequiel Garay the most clearances (71) and Romero would enter the top three for goals prevented (+3.1). Argentina’s run to the final was an undefeated one, and they never once trailed in any game.

Argentina’s opponent in the final was a familiar foe: Germany, the same side they’d faced in their previous two finals. This time the prospect was more daunting than ever, with Germany fresh off the back of a 7-1 humiliation of hosts Brazil in the semi-final.

The match was even, both teams had chances (ten shots per side) although Argentina were slightly more dangerous (1.4 vs. 1.2 xG), including three chances that Argentines will never forget: a shot by Higuain after a defensive error in the first half (0.26 xG), a shot by Messi in the second (0.33 xG), and an attempted lob by Rodrigo Palacio in extra-time (0.40 xG), that really should have gone under the onrushing Manuel Neuer. In the end, Mario Götze won the contest with the game’s only goal in the second period of extra-time.

Messi had to settle for the Golden Ball as a consolation prize. He was directly involved in five of his team’s eight goals (four goals and one assist), while he topped the tournament rankings for dribbles completed (46) and chances created (23).