Argentina vs France Prediction and Preview | The Analyst 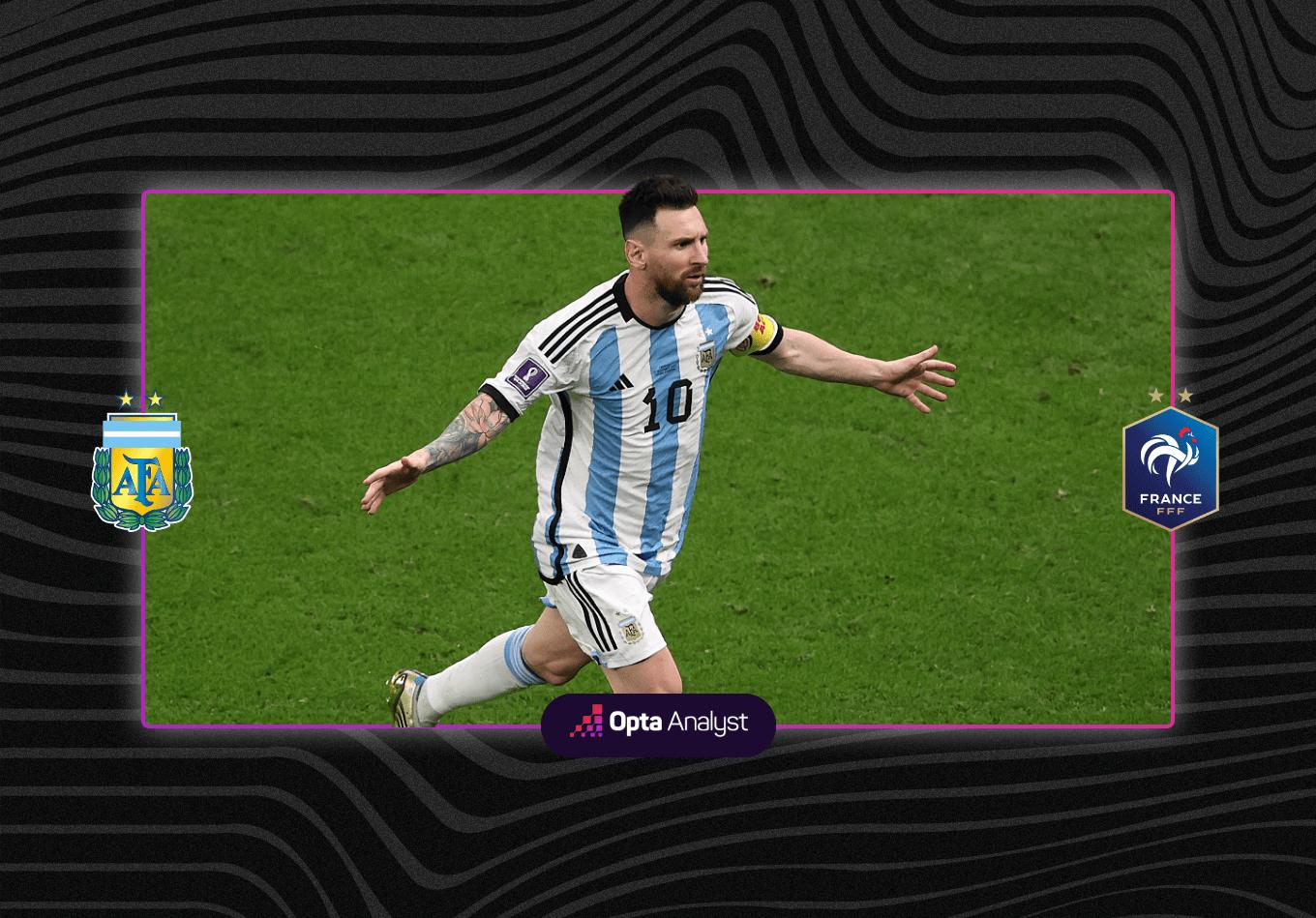 Lionel Messi is already set to make history in Sunday’s World Cup final. It is up to France to ensure he does not also take home the trophy.

Messi, in likely his last World Cup match, will set the outright record for finals appearances (26) as he gets his second shot at glory.

The Argentina captain was part of the team defeated 1-0 by Germany in the final eight years ago. Their title tilt at Russia 2018 then ended in the last 16, beaten by France.

But Messi has guided his side through to kickoff at the Lusail Stadium showpiece this time, where France are again their opponents.

France’s head to head against Argentina isn’t that pretty, having won only three of 12 meetings against them in all competitions and losing two of three World Cup clashes, but that epic 4-3 victory at the previous World Cup set Didier Deschamps’ men on course for the title.

Indeed, Les Bleus have won seven World Cup knockout games in succession – two shy of Brazil’s record – as they look to become only the third side (after Brazil in 1962 and Italy in 1938) to successfully defend their title. Hugo Lloris could become the first player to captain a team to triumphs in consecutive finals, while Didier Deschamps could become the first coach to do so since Vittorio Pozzo oversaw both Italy successes in the 1930s.

Make four predictions on the final to win $500

Other omens are more positive for Argentina: the last time the two World Cup finalists had both lost earlier in the same campaign – Messi and Co. were stunned by Saudi Arabia, while France lost to Tunisia – the Albiceleste beat the Netherlands to the 1978 title. Cesar Luis Menotti, in charge of Argentina in 1978, was the last coach younger than Lionel Scaloni to lift the World Cup.

But it is the other Lionel who is understandably hogging the limelight.

Messi would be a popular winner just about everywhere – except in the country where he plays his club football with Paris Saint-Germain.

“We are the team of France in the final of the World Cup. We fight for our team, our country,” said Ousmane Dembele of the possibility of he and his team-mates playing the role of party poopers.

Dembele also spoke of the importance of France keeping the ball away from Argentina’s “exceptional” talisman, someone he knows well from Messi’s time at Barcelona.

Antoine Griezmann, another of their then Barca team-mates, may have a key role to play in that sense, although his new posting in midfield has done little to slow his productivity in the final third.

Griezmann has created more chances (21) with a higher expected assists value (3.5) than any other player at this World Cup. The midfield delivered two crucial assists in France’s quarter-final win over England and put in an incredible defensive shift against Morocco in the semi-final. He has been vital to France’s tournament-leading non-penalty expected goals total of 11.9, although Argentina have allowed just 5.7 shots worth 0.4 xG on average in Qatar – two 2022 lows – as a backline marshalled by the likes of Cristian Romero and Lisandro Martínez has proven combative and strong.

There can only be one man, so influential has Messi been for La Albiceleste to this point. His five goals and three assists, including that beautiful assist for Julian Alvarez against Croatia last time out, at this tournament have boosted the 35-year-old to a joint-record 19 goal involvements across his World Cup career. Do not count against the Argentine reaching a landmark 20 with a goal in the final; he would become the first player ever to score in every round at a single World Cup. He’ll look to exploit spaces in the French backline left by the marauding Theo Hernandez. Raphaël Varane and Ibrahima Konaté will have their work cut out managing the space in behind as Messi looks to thread balls through for Alvarez.

Whatever Messi can do, PSG club-mate Mbappe will hope to do also. Of course, unlike Messi, he has won a World Cup, scoring in the final against Croatia in Russia. Should Mbappe net again, he would become the youngest player to get on the scoresheet in multiple finals at 23.

Either Griezmann or Mbappe have the opportunity to become the fifth man to score in two finals and the second (after Brazil’s Vava in 1958 and 1962) to score in two in a row.

One of these two players, unless Olivier Giroud is a goalscorer, is likely to finish with the Golden Boot, and probably the Golden Ball as well – the prize for the tournament’s best player.

It is very, very nearly too close to call. Just 0.1% splits the two teams, according to our prediction model, which probably matches the public perception of the fixture.

The supercomputer gives Argentina the slightest of edges at 35.1%, with France rated at 35.0%. With that in mind, do not discount extra time and penalties, with the draw considered a similarly strong 29.9% shot.