The Yays and Nays: Our Fantasy Football Rankings, Projections and Top Plays for Week 15 | The Analyst 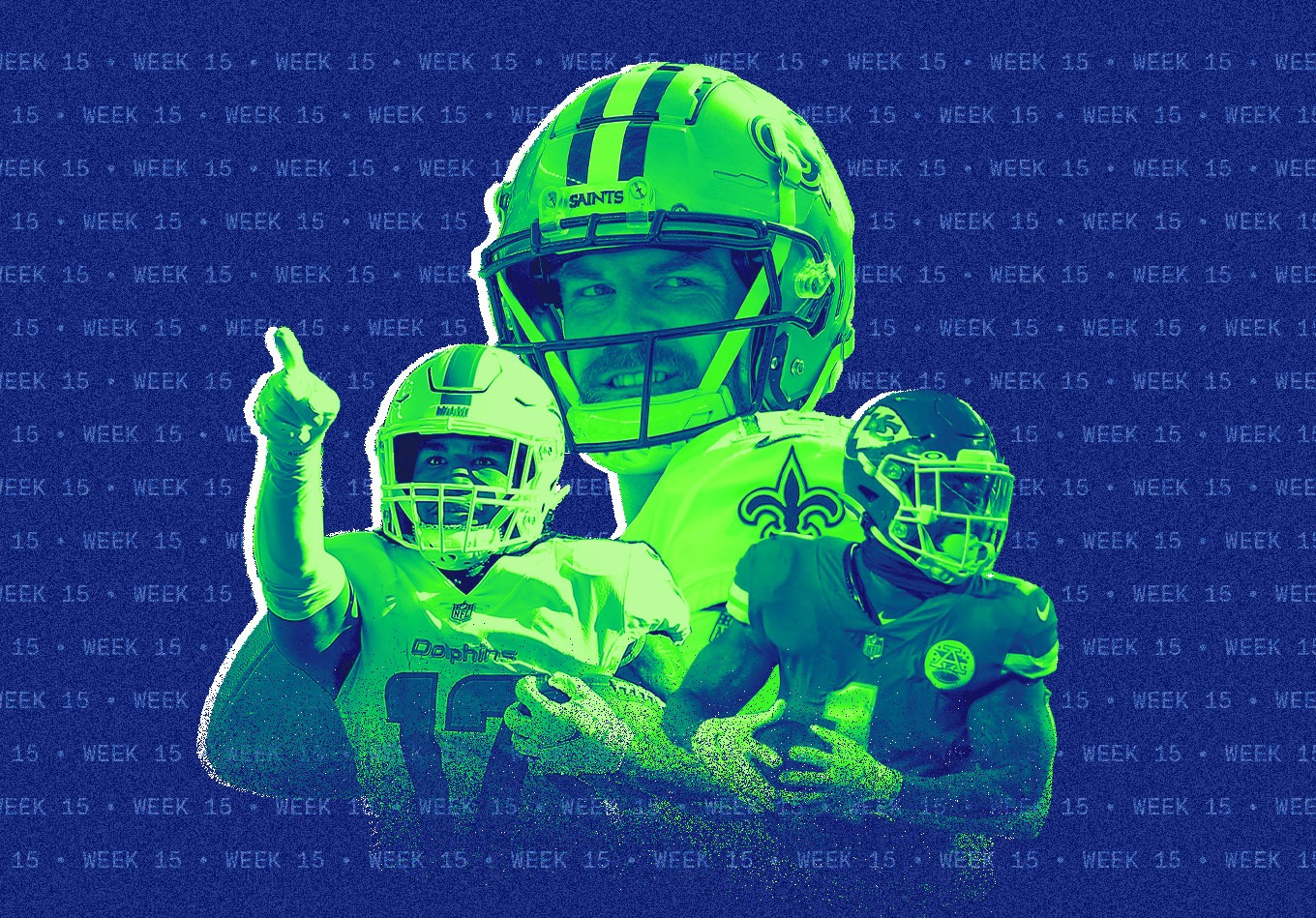 What are those numbers you ask? Well, 104 yards is how many passing yards Baltimore Ravens quarterbacks Tyler Huntley and Anthony Brown combined for last week. Sam Darnold had 120 passing yards. Josh Allen had 147 passing yards. Brock Purdy had 185 passing yards.

And those teams all won! Do you know who else had fewer than 150 passing yards last week? Derek Carr in the Las Vegas Raiders’ disastrous loss to the Baker Mayfield-led Los Angeles Rams and Tua Tagovailoa in his team’s loss to the Los Angeles Chargers.

In Week 13, Deshaun Watson threw for 131 yards. The Cleveland Browns won. Kirk Cousins threw for 172 yards as the Minnesota Vikings were victorious. Kenny Pickett, Aaron Rodgers and Huntley all threw for fewer than 200 yards in Week 13 wins. And the cherry on top? Dak Prescott only managed 170 passing yards in a game the Dallas Cowboys scored 54 points.

In total, 12 quarterbacks threw for fewer than 200 yards last week. Eleven quarterbacks failed to reach that benchmark in both Week 11 and 12.

Why do we bring this up? Because this has been a season-long trend that may only become more prominent as the schedule is now firmly in the cold months. Teams are only averaging 222.2 passing yards per game. That is the lowest figure since 2010 (221.5) and just two years ago, the average was 240.2 yards per game.

And this trend has rendered some good players unplayable as we reach the fantasy playoffs. Anyone thinking about playing Drake London might want to reconsider. The Atlanta Falcons haven’t thrown for 200 yards in a game since October and they’re starting rookie Desmond Ridder this week in a must-win divisional showdown against the New Orleans Saints.

D.J. Moore fantasy managers? The Carolina Panthers, riding running back D’Onta Foreman, have only thrown for 200 yards once in their last eight games and are averaging 147 passing yards over the past four.

Or how about the Detroit Lions? They have been a fantasy revelation the past couple of weeks, with Jared Goff throwing for at least 330 passing yards and multiple touchdowns in Weeks 13 and 14.

However, they’re playing the New York Jets in New Jersey this week. So not only are Goff and the Lions losing the comfy confines of their dome, but they’re playing in a cold weather game against a defense that has, get this, only allowed one quarterback to throw for at least 200 yards and one touchdown in a game since Week 4.

Therefore, even though the Lions had four wide receivers score at least 10 PPR points last week, our model is only projecting Amon Ra. St. Brown to reach that mark this week. And he’s doing it on the back of 10.2 projected targets – almost double the next closest Lion.

It’s a good bet that there will be more than a few teams throughout the rest of the season that don’t pass the ball with enough success to reliably have viable fantasy receiving options. So the key to selecting your lineups will be choosing players that receive a hefty number of targets and are playing in both fantasy-friendly offenses and matchups.

As always, let’s jump around and evaluate some Week 15 projections gathered from some of the top data-driven projections available using several of our AI-powered models. Refer back to our fantasy football rankings for any questionable waiver wire or lineup decisions.

Note: We’re comparing our rankings to the expert consensus rankings (ECR) from Fantasy Pros. Our rankings here may not match those on our rankings page, which is updated throughout the week. (We pulled these numbers from Thursday.) Once again, we are using PPR unless noted otherwise.

This week, we start our Yays and Nays with a banger. That’s right. Not only does our model have Dalton firmly in the Yay category this week, but our model is optimistic about his chances of providing QB1-type value.

For starters, he’s got a great matchup against the Falcons, who allow the fourth-most yards per pass play and let teams score on 45% of their drives – the worst rate in the NFL.

All the way back in Week 1, when Jameis Winston was still the starter for the Saints, he produced a QB7 finish – throwing for 269 yards and two touchdowns. Our model is optimistic that Dalton can replicate that performance, so he finds himself in the same tier as more elite quarterbacks like Joe Burrow and Justin Herbert.

Our whole intro was about the passing epidemic in the NFL this season. Well, luckily for fantasy managers, that hasn’t made its way to Patrick Mahomes yet. He’s the only quarterback to not have a game with fewer than 200 passing yards this season (his worst passing output this season is 223 yards).

That success, in turn, benefits everyone on that offense, including the Jet, who is the preferred option in the backfield for the Kansas City Chiefs on passing plays. Mahomes dropped back to pass 44 times last week and McKinnon was on the field for 28 of those snaps, including three of Mahomes’ four red zone pass attempts.

McKinnon is only projected for 7.4 carries this week. In fact, our model is projecting Isiah Pacheco for real success on the ground (15 carries, 74.8 rushing yards and the seventh-highest touchdown projection) but it doesn’t matter. McKinnon has at least eight targets in three of his last six games and with that passing volume, McKinnon is our model’s preferred Chiefs running back for the week.

Would it surprise you to know that Cooper is WR12 this season? Or that he’s 10th in the NFL in targets (109)? Or that he’s sixth in the NFL in burn yards, which measures how many yards are gained on burns – how often a targeted receiver does his part to achieve a successful play (significant gain towards a first down or touchdown) – regardless of the quality of the throw by the quarterback.

The reason for bringing up those season-long stats is to highlight that even though the last few weeks have been a struggle for the Browns offense, Cooper has averaged 10 targets per game in his last four outings. His breakout with Watson at quarterback is coming.

Against a team that he averaged nearly 25 yards per catch back in Week 7, our algorithms like his matchup again this week. He’s got a strong chance of finishing as a top-10 wide receiver.

Pittman’s average draft position (ADP) was 33rd, going off the board as WR13. Expectations might have even been higher than that, as he was one of the preseason fantasy darlings. Which makes his current position as WR22 disappointing.

However, he’s experienced subpar quarterback play and has only hit paydirt twice, so it’s actually quite impressive that he’s still delivering low-end WR2 value. Consistency has been his greatest asset – he has at least six receptions in eight games this season – but this is the week he has a chance for a big game.

The Minnesota Vikings have been simply unable to stop elite wide receivers this season. Garrett Wilson recorded 162 receiving yards against the Vikes two weeks ago. DeAndre Hopkins had 159 yards and a touchdown, Stefon Diggs notched 128 yards, and both Tyreek Hill and Jaylen Waddle surpassed that number earlier this season.

As the clear top receiving option for the Indianapolis Colts, it’s Pittman’s time to shine. He’s a legit WR2 this week with WR1 upside.

It’s been a rough season for Brady, there’s no other way to say it. In his previous two seasons with the Tampa Bay Buccaneers, Brady had recorded at least two touchdown passes in over 75% of games and at least 300 passing yards in 48%. This season, he only has multiple passing touchdowns in four games and has only surpassed 300 passing yards three times.

Unfortunately, things are unlikely to get better this week. The Cincinnati Bengals are fifth in opponent passer rating and have yet to allow a quarterback to throw for 300 yards. So, despite being second in projected passing attempts (tied with Mike White!), Brady is nothing more than a low-end QB2 this week.

He’s still a better option than other quarterbacks that have struggled this season like Daniel Jones, Ryan Tannehill and Taylor Heinicke, but he’s nowhere near the elite tier he’s used to occupying.

Dobbins was phenomenal in his first game back from injury last week, rushing for 120 yards and a touchdown. Josh Jacobs and Saquon Barkley are among the 23 other starting running backs that Dobbins outgained last week. However, there are two reasons why he likely won’t come close to replicating his performance.

First, the Ravens attempted 42 runs and only 17 passes against the Pittsburgh Steelers last week – a ratio that is not likely to be repeated this week or again the rest of the season. Secondly, Dobbins has played 20 games in his NFL career. In 10 of those games, he’s been the recipient of one or zero targets, including last week.

Without any sort of passing volume, Dobbins is merely a touchdown-dependent Flex play. And with Gus Edwards also in the backfield, it’s anyone’s guess as to how the red zone carries will be split. Fantasy managers can likely do better than Dobbins this week.

We mentioned Waddle’s Week 6, 129-yard performance against the Vikings earlier. But did you know that since that game, Waddle’s only averaging 6.4 targets per game, a shade over four receptions per game, and has only surpassed 90 receiving yards in a single game once?

For the season, Waddle is now 27th in targets per game and 35th in receptions per game. Hill, by the way, is third and first in those categories respectively.

This week, facing a Buffalo Bills defense that already held the Miami Dolphins and Tua Tagovailoa to 186 passing yards in their first meeting, Waddle’s unlikely to see a desirable amount of passing volume.

Especially with only three total receptions in his last two games, Waddle falls more into the boom/bust grouping of wide receivers than normal. Our model expects him to struggle to deliver anything more than Flex type of value. 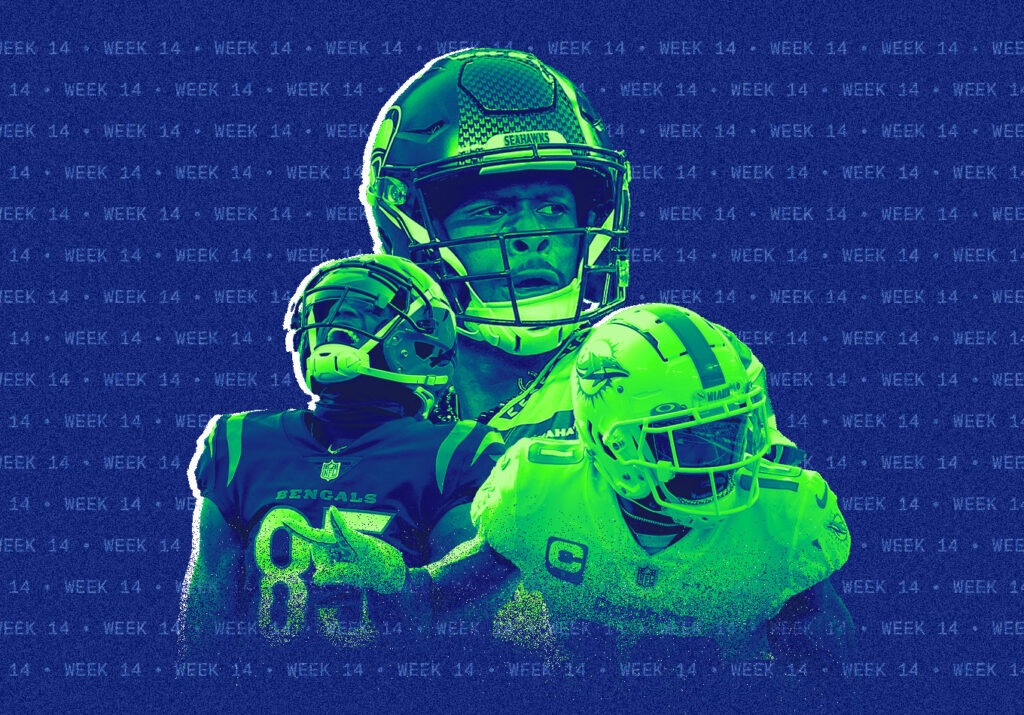