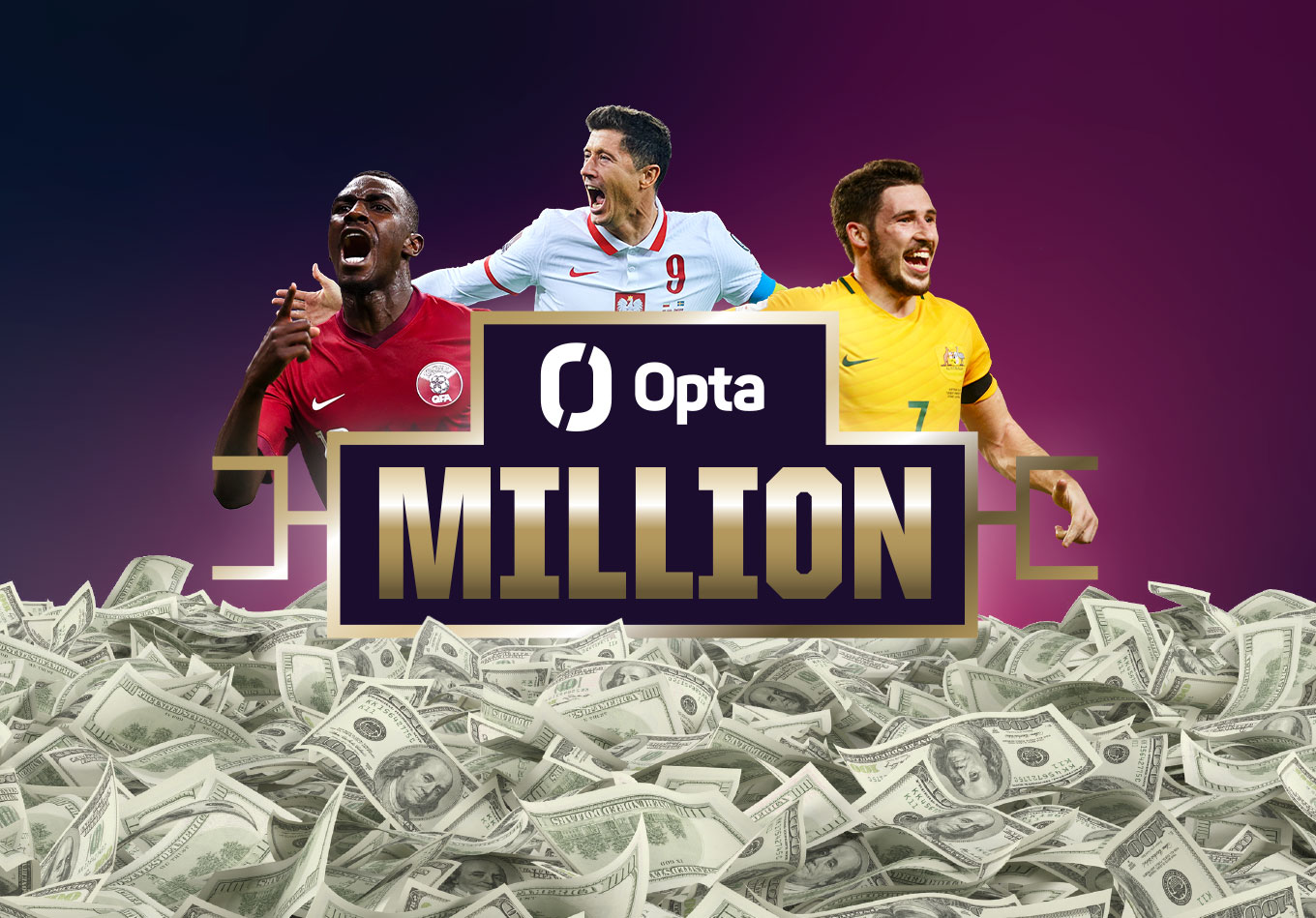 Destiny is in your hands. Play the Opta Million, predict your bracket correctly and you could win $1 million. To give you an idea of how you could fill out your Opta Million bracket, Lewis Ambrose takes us through his own predictions about what he expects will happen at the 2022 World Cup in Qatar.

The World Cup group stages always throw up a surprise, right? The holders have been sent home before the knockouts begin in four of the last five finals. France might escape that fate this time around, having suffered it back in 2002 (and again in 2006 as reigning runners-up, if that’s a thing) but Les Bleus will be the victims of a small shock as they only manage to finish second behind Denmark.

The Danes were impressive at last summer’s Euros and are a well put-together team capable of playing compact and on the break or with more possession and that will bodes well for any tournament run.

Unfortunately, that is the closest I think we will come to any real shocks. There are vulnerabilities across the big-name sides — Germany and Spain both lack a regular source of goals, England don’t but regularly fail to score all the same, the golden generations of Croatia and Belgium are fast approaching golden retirement homes — but the lack of an obvious ‘Group of Death’ means they should all make it through.

The biggest name group stage exit is probably Robert Lewandowski, who failed to score in his three appearances at his only World Cup to date (2018). That won’t happen again, not with Poland facing Saudi Arabia, but they don’t have the strength of Argentina or Mexico.

If you want a really big scalp in terms of teams Portugal look the most likely to bow out for me, though I think they’ll make it through. The 2016 European champions sit in what looks like a fairly even group and posed with the question of whether Cristiano Ronaldo is still someone you can build an attack round rather than a goalscorer teams increasingly have to accommodate, but they don’t have any single team to fear in their group and have more than enough talent to pick up enough points even if they struggle to gel as a team.

England have been hideous for months now, failing to win any of their six games and keeping just one clean sheet as they suffered Nations League relegation, but their group looks fairly kind. Gareth Southgate’s side will do enough, by hook or by crook, to win their opener against Iran, putting them in a position so commanding that even one slip-up (and I expect one!) against the USA or Wales would not be fatal.

Germany have not quite clicked under Hansi Flick just yet but have shown some nice patterns of play, with a back four that morphs into a back three as one wing-back, usually Robin Gosens or David Raum on the left, drives forward and the defender on the opposite side, almost exclusively Thilo Kehrer, tucks inside. The tactic gets the best out of Germany’s lack of obvious options at fullback in a back four but has also led to a reliance on playing the versatile Kehrer, who has far from impressed in the Premier League at West Ham since his summer move from PSG. The solutions to both that and Germany’s age-old striker problem could lie at Borussia Dortmund, where Niklas Süle has lined up at right-back of late and Youssoufa Moukoko, who turns 18 the day the opening game of the finals is played, has become first choice centre-forward and directly contributed to a Bundesliga goal every 75 minutes so far this season.

Spain have had no such luck finding a regular source of goals out of thin air so, if Moukoko goes and plays, that should seal top spot for Germany.

Other group winners should include Brazil and Argentina, who look good enough to sail through, and the Netherlands in Group A, though Senegal might give them a run for their money, and a Darwin Núñez powered Uruguay as he is freed from the scrutiny of the English press.

That all leaves us with an obvious tough side of the and an obvious weak side of the draw, at least historically speaking, with just one team able to reach the final from three enormous R16 games. One side has 22 World Cup final appearances. The other, containing England, has just four, with only one of those (Spain 2010) coming since 1966.

And this is where I think England get stung. Senegal weren’t rewarded for a positive approach four years ago but they are even better now and have everything to sting Gareth Southgate’s side on the break. That everything includes an intimate knowledge of the England backline: Sadio Mané and Ismaïla Sarr will be licking their lips if the England boss continues to persist with long-term lieutenant Harry Maguire. Senegal’s reward will be a quarter-final with Denmark because the Danes are good but also because Mexico only ever reach the last 16 — they have lost at this stage in all of the last seven World Cups. They are destined to always escape the group but never win a knockout game again.

Argentina’s now record-breaking unbeaten run will continue against France as they avenge their 2018 exit. The game back then looked and felt like the passing of the torch from Lionel Messi to Kylian Mbappé but only the former has picked up a Ballon d’Or since and this could be his last shot at the world’s biggest team prize, he won’t be knocked out without a fight. Unlike the French, where in-fighting is something of a tournament tradition and could marr their chances of retaining the title, with Mbappé likely forced to the strengths of Karim Benzema, stretching play, just weeks after complaining he was not being allowed to be more involved in Paris Saint-Germain games. Argentina will face the Netherlands next after they do what England couldn’t and play patiently but not pragmatically against the USA, seeing them off in a low-scoring affair.

Germany should have too much for Belgium, who are no longer anywhere near as star-studded as you might expect and need Eden Hazard and/or Romelu Lukaku to somehow be fully fit so everything isn’t left to Kevin De Bruyne. That win would see them take on Brazil, who will brush Portugal aside, the difference being that one side looks like a real team playing to its strengths and the other is just an assembly of players looking to keep it tight despite an embarrassment of technical talents. The selfless Diogo Jota will be a big miss.

The last clashes will see Spain dominate possession and beat Croatia — though there’s nothing like a repeat of the incredible 5-3 the teams played out at Euro 2020 — while Aleksandar Mitrović beats Darwin Núñez in the battle of the enormous Premier League number nines to send Serbia into a first ever World Cup quarter-final.

Argentina roll on against the Netherlands. Lionel Scaloni’s side have the patience, the organisation, and the pressing game to completely shut down Louis van Gaal’s favoured back three, forcing the ball wide, away from Frenkie de Jong, before waiting for their chances and attacking space at speed after turnovers.

A dream semi-final against Brazil is set up after the Seleção beat Germany. With Casemiro and Fred, Brazil have a midfield that can match the intensity Germany try to play with but pair it with pragmatism. Ultimately games are won in the boxes and Brazil have players who you can absolutely rely on for consistent end product at any level, Germany do not, and Neymar could be set for a field day if Germany line up their regular duo of Thilo Kehrer and Jonas Hofmann on the right.

Senegal, it feels so cruel to write this, become the first African nation to reach a second World Cup quarter-final after doing the same in 2002, making it a fourth appearance for African teams in total, but also a fourth defeat as Denmark’s back three and combative midfield pairing of Pierre-Emile Højbjerg and Thomas Delaney succeeds in shutting down Sadio Mané. Denmark will take on Spain in the semi-finals as their possession proves too much for Serbia.

Argentina-Brazil has everything to be a classic but two questions dominate.

Something will have to give… and it’s Neymar. Brazil haven’t scored in any of the last three meetings between the sides and that will continue, with Argentina yet again sitting tight and choosing their moments to pounce. If a team can do the defensive part successfully and contains Lionel Messi, it’s almost always going to be game over.

Spain will reach the semi-final having not ever truly impressed — we’ve seen that before — while running Pedri into the ground as their only player consistently capable of magic. By now there will once again be so many minutes in his legs and Denmark, buoyed by motivation not to suffer a second successive major finals defeat at this stage, will make it over the line with their directness out wide and physical frontline perfectly matched up against Spain’s most obvious flaws out of possession.

Brazil go on to beat Spain in the third place game but all eyes are on the final and its narratives.

Denmark, the architects of the biggest shock Euros win of all time, against Argentina, the only previous World Cup winner to have a worse than 50% record in World Cup finals.

Will Lionel Messi win the World Cup at last? Can Christian Eriksen deliver the most Hollywood of endings after the horror of his Copenhagen collapse just 18 months earlier?

It’s Messi. It was always going to be Messi. He has been in stunning form since the summer and his role at PSG, where there is less of a burden on him than there was at Barcelona, combined with a winter World Cup, has allowed him to finally enter a tournament relatively fresh, not carrying the physical and mental exertions of an entire club campaign with him.

He is also no longer carrying Argentina. In 2006 they were figuring him out. In 2010 they didn’t know how best to use him along with a ridiculous number of star forwards. In 2014 they relied on him entirely. And in 2018 they were wide open at the back and squeezing attackers into the side once more. Now, 17 years on from his international debut, Argentina are finally a team that accommodates Messi without forcing everything through him.

There’s a balance to the team that allows them to play against any opponent. They can be organised and sting you on the break, they can crack open a stubborn defence. That’s the only way you can go unbeaten this long at this level. They play with Messi, not for him and not around him, and that is what will finally see him and them win the World Cup.