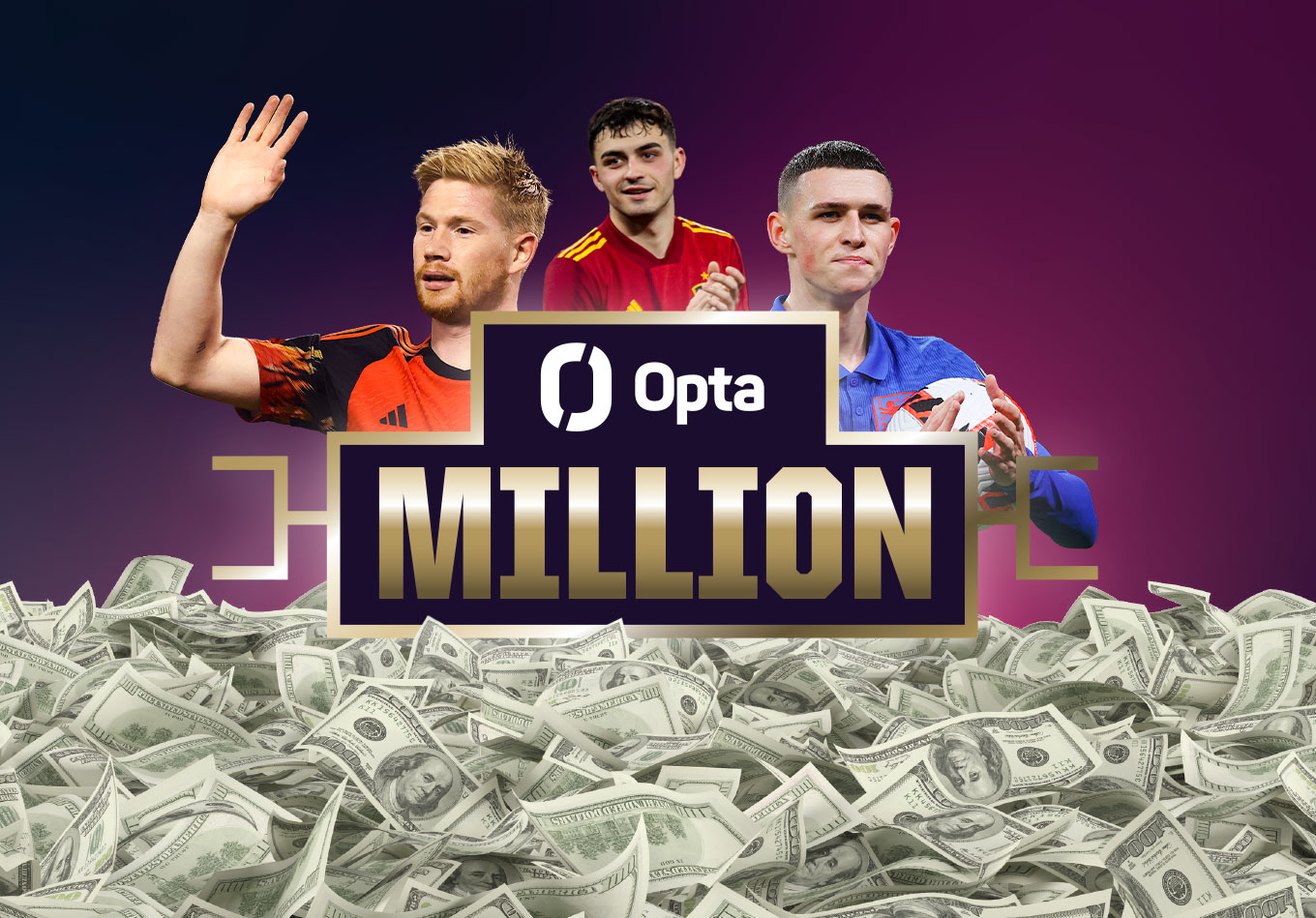 Destiny is in your hands. Play the Opta Million, predict your bracket correctly and you could win $1 million. To give you an idea of how you could fill out your Opta Million bracket, Owuraku Ampofo takes us through his own predictions about what he expects will happen at the 2022 World Cup in Qatar.

The 2018 World Cup in Russia was full of bliss as fans all over the world were treated to some thrilling games. There were goals aplenty – 122 scored in 48 games – with the only goalless draw coming after 36 games, which was the latest in World Cup history.

The opening day of the tournament saw Russia, the competition’s lowest-ranked football team, smack Saudi Arabia 5-0. With their victory over Colombia, Japan became the first Asian team to overcome a South American opponent in a World Cup match.

Argentina came into the tournament as the runner up from 2014 and needed a third group game to pick up their first win against Nigeria.

Perhaps the biggest shock of the tournament was when defending champions Germany were eliminated at the group stage after losing to South Korea. But history suggests that maybe it wasn’t such a surprising occurrence.

In recent times, winning the World Cup has come at a cost. The defending champions have embarrassingly failed to go past the group stages in the subsequent tournament: Italy in 2010, Spain in 2014 and Germany in 2018.

So far, everything suggests that France will fall victim to ‘the World Cup champions’ curse. The form of Les Bleus has been a mixed bag since being crowned champions in Russia. Didier Deschamps’ side crashed out of Euro 2020 at the round of 16 stage and although they won the 2021 UEFA Nations League months later, they’ve since won just 50% of their games.

This France squad demonstrated their lack of ability to defend titles after they bowed out of the 2022-23 UEFA Nations League at the group stages after picking up just one win. Coincidentally, France were paired with Denmark – a team in their World Cup group – in this season’s Nations League and lost both games. In the last World Cup, both teams were paired in the same group and played out a goalless draw.

France will begin their World Cup campaign against Australia just like they did in 2018 when they needed a late own goal by Aziz Behich to secure all three points. The Socceroos are currently on a five-game winning streak and haven’t conceded in their last three games. If France, who will be without Paul Pogba and N’Golo Kante, fail to win that, they will head into the second game against Denmark – their bogey side – under pressure before playing Tunisia. In my World Cup bracket, I predict a disastrous campaign for Les Bleus with a dreadful group stage performance culminating in a third-place finish in Group D.

The USA return to the World Cup after their absence in the 2018 edition. That was just the second time they missed the quadrennial event since 1986. Gregg Berhalter’s men narrowly booked their place in Qatar after picking up the final automatic qualification slot from North and Central America. The USA are a young, energetic side but their lack of experience will make it difficult for them to navigate through a tricky Group B which includes England, Wales and Iran. It is the type of group that I anticipate will be decided on the final day, and in the last minute. USA recently failed to impress in their friendlies against Saudi Arabia and Japan and I see them finishing bottom in Group E with Wales being the surprise pick.

I predict Africa having its largest representation in the round of 16 with Senegal, Morocco and Ghana to qualify.

Nigeria were the last Africa Cup of Nations winners to participate in the World Cup which was back in 2014. Senegal will be looking to emulate Nigeria’s success by also reaching the knockout stages. The Lions of Teranga have lost just once in their last 25 games under Aliou Cissé and are ranked 18th in the world – their highest rank ever.

Cissé has been in charge of the team for seven years and the majority of the squad have also been playing together for a while. With Édouard Mendy, Kalidou Koulibaly, Idrissa Gueye, Cheikhou Kouyaté, and Sadio Mané playing at their peak, it is now or never for Senegal. There have been many similarities drawn between the recent Senegalese team and the 2002 team that reached the quarter-finals of the World Cup. In 2018, Senegal became the first side to be eliminated from the World Cup via the fair play decision and I believe luck will shine on them this time.

Morocco were the first African team to go beyond the first round of the World Cup, reaching the round of 16 in 1986. The North African side have since failed to light up the global stage, only qualifying for four editions since. Their previous three attempts ended at the group stages but the performance in 2018 was particularly impressive albeit finishing bottom.

The appointment of Walid Regragui meant that Hakim Ziyech returned to the national team for the first time in two years after a dispute with former coach Vahid Halilhodžić. The Atlas Lions have underperformed at the Africa Cup of Nations recently and time seems to be running out for the golden generation. Belgium are outright favourites in Group F and the first game for Morocco against Croatia will be the tiebreaker for the African side.

After missing out on the 2018 edition, Ghana make a return to the Mundial. The West African country head into the tournament as the lowest ranked (61st) team. But this won’t be the first time the Black Stars will be perceived as underdogs. In 2006, Ghana surprised the world by reaching the knockout stages on their first attempt despite being drawn alongside Italy, USA and Czech Republic. Four years later and they made history by reaching the quarter-finals of the competition. The 2014 edition was Ghana’s poorest performance at the World Cup but the team still managed to draw with eventual champions Germany.

Ghana’s form has been shaky with Otto Addo picking up just two wins in his first eight games in charge – a record which could improve or worsen with Ghana set to take on Switzerland a week before playing Portugal. Portugal have three wins in their last 14 World Cup games and Ghana could cause an upset considering poor form of Fernando Santos’ men this year.

Brazil head into the World Cup as one of the favourites – they probably go into every tournament with that tag. They are the most successful country at the World Cup, winning the trophy on five occasions. Brazil are currently ranked number one in the world and with Tite announcing he will leave after the World Cup, the South Americans will desperately be after a happy ending. Since losing the 2021 Copa América final, Brazil haven’t lost a single game and look better after each progressive match.

Neymar needs just three goals to surpass Pelé’s record of 77 goals for Brazil. I expect the PSG star to reach that feat in the group stages with Brazil finishing with a 100% record at the group stages for the seventh time in their history.

England’s failure to top group B means that they set up the tie of the round of 16 against an in-form Netherlands side.

Netherlands will stretch their unbeaten run to 19 after they brush aside a subpar England side. A result that could lead to the sacking of head coach Gareth Southgate. The Dutch will play Argentina, who easily dispatched Australia, in the next round.

Brazil will meet Ghana in the round of 16 just like they did in 2006 and the result will be similar with the South Americans cruising to victory. The world number one will then play another African country in the quarter-finals as they face Morocco, who pulled off a surprise victory against Spain in the last 16.

Although Cristiano Ronaldo will become the only player to score in five World Cups, he will exit the tournament still without a goal in the knockout stages of the competition. His Portugal side will fall at the round of 16 hurdle for a second successive World Cup, this time to a spirited Serbia team.

Denmark will look to recreate their impressive Euro 2020 performance after they comfortably beat Mexico. In the way of the Danes will be Senegal, who narrowly snuck past Wales in the round of 16.

This will be a repeat of the 2014 semi-final but this time Argentina will have it a lot easier and won’t need penalties as they end Netherlands’ unbeaten run.

Brazil will reach their 12th World Cup semi-finals after beating Morocco in a very one-way affair. Tite will be glad his side played Ghana and Tunisia in the pre-tournament friendlies.

Senegal will make history as they beat Denmark in a tightly contested game. I expect the game to go all the way with Mendy becoming the hero of a shootout.

Serbia’s fairytale run will come to an end when they meet a talented Belgium side. Romelu Lukaku will extend his record as the country’s all-time top scorer and surpass the 70-goal mark.

Familiar rivals Argentina will once again stand between Brazil and silverware. In the 2021 Copa América final, Brazil would have felt hard by after losing the game despite dominating and outshooting Argentina 13-6.

It will be feisty like any typical South American battle, but Brazil will edge Argentina, ending Lionel Messi’s dream in the process. Neymar will be crucial in this game pulling the strings in the middle of the park.

It’ll be Brazil’s eighth final – the joint highest in the competition alongside Germany – and they will play Belgium who will break Senegal’s resolve. It will be the culmination of steady progression for the Red Devils who reached the quarter-finals in 2014 and finished third in 2018.

Argentina will still feel the effect of their painful semi-final defeat and that will allow Senegal to make history by becoming the first African country to finish third in a World Cup.

Although the final will be a meeting between the two best ranked teams in the world in Brazil and Belgium, there will be gulf in class in terms of experience.

Whilst Brazil will be playing in their eighth final, Belgium will be making their debut. Brazil will have the upper hand thanks for their final experience – the Seleção boast a 71.4% win rate in World Cup finals.

Brazil will take an early lead through Neymar and go on to preserve their clean sheet to win a record-extending sixth World Cup in Qatar.

Neymar will end the tournament with the golden ball and golden boot. In Brazil, he will be regarded as an undisputed great as he has now won a World Cup whilst being the highest goal scorer and assister in the country’s history.