World Cup 2022 Guide to Each Group | The Analyst 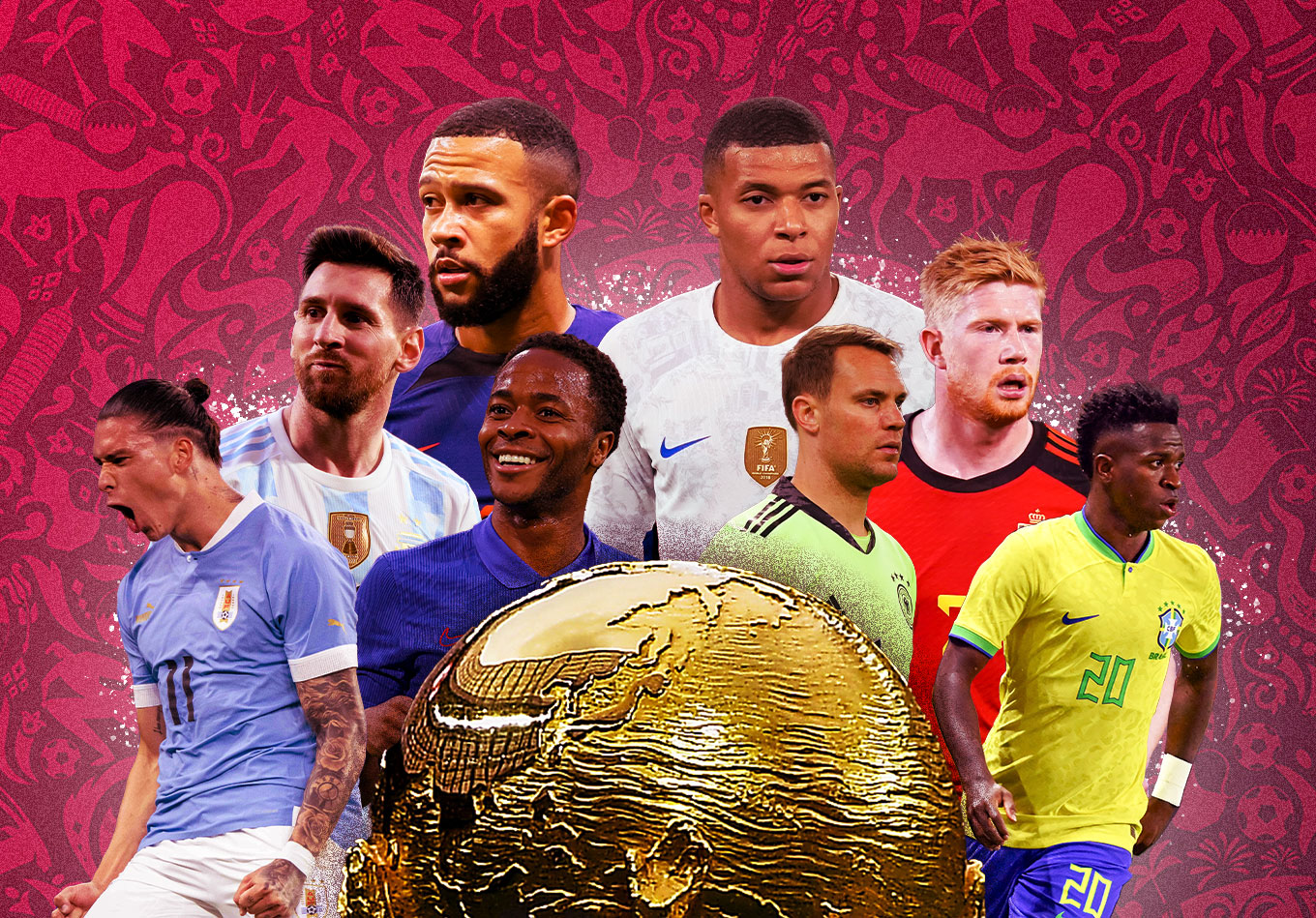 World Cup 2022 Guide to Each Group

A whistle-stop tour of every group at the 2022 FIFA World Cup in Qatar.

This will be a tournament of firsts for host nation Qatar, whose opener against Ecuador will be their World Cup bow.

While a run to the latter stages is probably beyond the reigning Asian Cup holders, they’re in a group that should provide a real possibility of reaching the knockouts.

That would be an achievement and it’d see them avoid becoming only the second hosts to be eliminated at the first hurdle after South Africa in 2010.

The Netherlands, back after missing out in 2018, are expected to top the group and will hope to finally end their curse – they’ve finished as runners-up more times (three) without winning the World Cup than any other nation.

But otherwise, it looks likely to be a shootout for second.

Ecuador will be an intriguing watch after tallying their highest-ever goals tally (27) during an eye-catching qualification campaign despite having comfortably the youngest average starting XI (25 years, 334 days) in the South American section.

And Africa Cup of Nations winners Senegal are only the team to reach the World Cup as African champions in the 21st century – they’ll hope to emulate the Nigeria side that got out of their group in 2014.

There is an air of familiarity surrounding Group B, and the three so-called lesser sides will hope that plays in their hands.

For England, this may be trickier than some fans expect.

Gareth Southgate has led the Three Lions to at least the last four in each of his two major tournaments as boss, a record only Sir Alf Ramsey can match, but recent performances have attracted significant criticism and Nations League relegation has them looking vulnerable. Captain Harry Kane will be looking to break records this winter, as he not only seeks to become the first player to finish as top (or joint-top) scorer at two different World Cup tournaments, but also looks to break Wayne Rooney’s scoring record for the men’s national team.

The USA will be considered England’s biggest threat. Their young squad is packed with potential, though Gregg Berhalter’s side arguably underachieved in qualifying as they only came third.

Wales’ inexperience at this level – Qatar 2022 will be only their second World Cup – could translate to a fearless approach just as it did at Euro 2016. England were in their group then, a group that Wales topped, before memorably reaching the semi-finals. Rob Page’s side qualified for the tournament after beaten Ukraine 1-0 in the European Play-Offs.

Fairly or not, few will expect Iran to get out of the group. After all, they’ve never reached the knockouts in five previous attempts, with only Scotland (eight before 2022) featuring at more World Cups without getting beyond the first round.

This may not be the most talented squad Argentina have ever had, but it’s arguably the most unified they’ve been in years following Copa America success in 2021.

That ended a 28-year trophy drought in major competitions, with Lionel Scaloni managing to find the balance between collective strength and getting the best of Lionel Messi.

Qatar will be Messi’s last World Cup and therefore the final chance to score a knockout goal, as all six of his goals in previous tournaments have been in the groups.

But Messi isn’t the only attacker defences will be worried about in this group. Robert Lewandowski had a hand in 13 goals in qualification – including a penalty in their 2-0 play-off victory over Sweden – with Poland’s haul of 32 bettered only by England (39), Germany (36) and the Netherlands (33) in Europe.

Poland will expect to battle against Mexico for second in Group C, with El Tri having reached the knockouts in each of their previous eight World Cup appearances, last failing in 1978.

For Saudi Arabia, the opportunity is there to cause a major shock, though they have only won three of their past 16 World Cup games – expectations will be low.

While some might ponder if France can be the first side since Brazil in 1962 to retain the World Cup, others will have an entirely different perspective of their pre-tournament aim.

That’s because each of the past three – and four of the previous five – defending champions have been eliminated in the group stage. Granted, France have been to more World Cup finals (three) than any other team since 1998, but the last time they went into a World Cup as holders, they finished bottom of their group.

Denmark beat France 2-0 back then and head Qatar as a team to watch. They won nine out of 10 in qualifying, kept more clean sheets (eight) than any other European side and reached the Euro 2020 semi-finals last year.

Kasper Hjulmand’s side will fancy their chances of reaching the knockouts for the fifth time in six tournaments, while Tunisia have never got out of the group in six previous qualifications.

Russia 2018 was the first time since 1950 – when they didn’t participate – that Germany failed to get past the first round. That was a major blemish on an otherwise exceptional record this century, having reached at least the semi-finals in every other World Cup.

Die Mannschaft provided an efficient response in qualifying, becoming the first team to secure their place at the finals after hosts Qatar as they won nine of 10 matches.

Spain will expect to run Germany close, however. La Roja’s 2018 campaign wasn’t much smoother than the Germans’, with Julen Lopetegui sacked on the eve of the tournament.

But in Luis Enrique, they’ve got a coach who has successfully re-established the brand of football we’ve come to expect from them. They averaged 76% possession and faced the joint-fewest shots (38) during the European qualification.

Japan will be the side most likely to challenge the two European heavyweights, though if they do reach the knockouts at back-to-back World Cups for the first time, it’ll be a massive shock.

Similarly, Costa Rica will be under little pressure. They sprung a surprise in 2014, though they head into this edition winless in six World Cup games. Los Ticos qualified via the inter-confederation play-offs after overcoming New Zealand.

Belgium’s ‘Golden Generation’ have done a good job of establishing Belgium as a threat at recent World Cups – they are one of three teams to reach the quarter-finals at the past two tournaments.

But many of their best players are arguably on the decline. Their hopes will likely fall on Kevin De Bruyne and Romelu Lukaku, whose 11 major-tournament goals since 2014 is bettered by only Cristiano Ronaldo (13) among European players, though the Inter striker has struggled for fitness this term.

Beaten finalists last time, Croatia will expect to challenge for top spot, though their track record at the World Cup is rather erratic. In their previous five appearances, they’ve either not got out of the group (three times) or reached the semis (twice).

Similarly unpredictable in that sense are Canada. Appearing at the World Cup for the first time since 1986, it’s difficult to predict how the Canucks will adapt to their situation.

Yet, they impressed as they won the third section of CONCACAF qualifying, scoring more (23) and conceding fewer (seven) than anyone else.

Morocco are appearing at consecutive World Cups for only the second time. If they’re to get out of the group for the first time since 1986, they’ll need to cut out the late concessions after two of their four goals against four years ago came after the 90th minute.

Bookmakers’ favourites and record-winners Brazil have continued their run of reaching every World Cup, but by their own standards it’s been a while since they last won it (2002).

If they aren’t successful in Qatar, their drought will extend to 24 years by the time 2026 comes around – that’d be their joint-longest dry spell since their first title in 1958.

Nevertheless, their 15-match unbeaten run in World Cup group games stands them in good stead to reach the last 16, and Switzerland will be confident of joining them after reaching the knockouts of each their past four tournaments – France and Belgium are the only European sides who can match that. The Swiss topped their qualification group ahead of Italy, dumping Roberto Mancini’s side into the play-offs where they would subsequently get shocked by North Macedonia.

In contrast, Serbia have lost more World Cup games (seven of nine) than any other European nation since 2006 and haven’t been past the group in their three appearances as an independent country.

The Indomitable Lions will be hoping to prove much has changed since their last appearance in 2014.

Considering the talent they routinely produce, Portugal’s record of just three wins in their past 14 World Cup games is far from spectacular.

Fernando Santos will hope Cristiano Ronaldo’s found some form by kick-off. Like Messi, Ronaldo also has never scored in the knockout stages of a World Cup (something that Matthew Upson has over the pair of them), so that’s one feat he’ll aim to achieve.

Similarly, Ronaldo will be only the player to net in five World Cups if he does score.

But should Portugal focus too much effort on helping Ronaldo tick things off his bucket list, they find themselves surrounded by three teams capable of capitalising.

Uruguay have won six of their past eight World Cup games and progressed from the group in five of their previous seven appearances, while Ghana have caused plenty of sides issues at the tournament before. Those two sides will also meet for the first time since Luis Suarez’s infamous handball in 2010.

South Korea’s record when not co-hosts is poor, winning only three of 27 such World Cup games, but let’s not forget it was their brilliant 2-0 win that eliminated Germany four years ago.