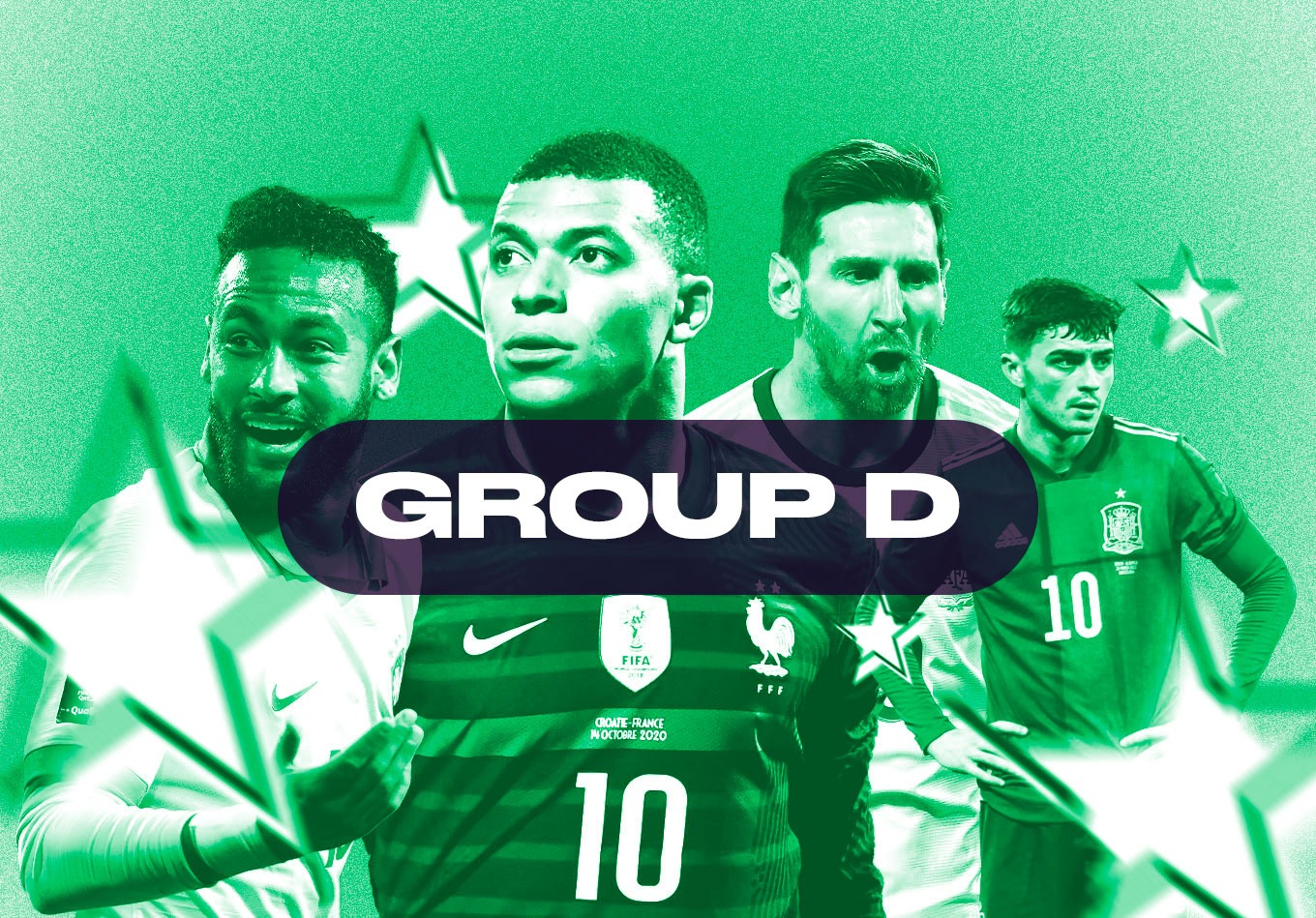 Group D at the 2022 World Cup consists of the current world champions, a team that’s defeated them twice recently and two teams with a lot of work to do if they’re going to get a fourth match in Qatar.

If this tournament happened when World Cups typically happen, France would have entered as our 2022 World Cup favourites. Back on 15 June when we released our first simulations, the supercomputer pegged France as the team to beat with nearly an 18% chance of lifting the trophy.

That’s now dipped to 12.04%. The supercomputer doesn’t take UEFA Nations League matches as seriously as others might, but it doesn’t ignore them. Les Bleus won one of six in League A Group 1, and they’ll now have a familiar opponent chasing them for the top spot in Group D in Qatar.

Neither of the Nations League matches against Denmark went particularly well for France – a 2-1 defeat in June followed by a 2-0 defeat in September – but the supercomputer doesn’t overreact to a few months of uninspired football. It considers the bigger picture – perhaps it should run for office – and that still belongs to the defending world champions. France trailed for under 10 minutes in the 2018 edition, so it’s going to take something drastic for them to not be a force in Doha (and if you want to know what that force will be, read to the end).

Their 61.8% chance of topping the group is strong but not bulletproof. Three other sides have a higher likelihood of topping their groups – Argentina (69.3), Brazil (67.7) and England (62.9) – but none of those teams have a group-mate the supercomputer rates as highly as Denmark.

The Danes are 10th favourites to win the tournament at 3.32%, and that puts them ahead of 2018 runners-up Croatia. They’re also 10th to reach the last 16 at 72.13%. They proved themselves at an emotional Euro 2020, and it would be less of a shock for them to win the group than if either Australia or Tunisia were able to displace them in the last 16. That said, Denmark haven’t been perfect either. They lost both of their Nations League matches to group winners Croatia, and before that competition picked back up in June, they lost 4-2 to the Netherlands in a March friendly.

Denmark don’t always qualify out of UEFA – it’s known to be difficult, just ask Italy – but when they do, they tend to stick around for a bit. This is their sixth qualification in the last 10 World Cups. In those previous five World Cup appearances, they’ve reached the round of 16 or quarter-finals in four, only going out in the groups in South Africa in 2010.

France-Denmark is the title bout of Group D, but we’re not going to see it until the second matchday on 26 November. Instead, they ease into it with France opening against Australia and Denmark facing Tunisia. With a major tournament comparatively close in the rearview mirror and plenty of difficult competition since then for France and Denmark, it’s difficult to see any surprises on that first matchday.

The bottom half of the group can’t say the same.

Australia got here in the most elongated of routes, needing their playoff against Peru to go to penalties before advancing 5-4 after a goalless 120 minutes and plenty of strange goalkeeper dancing. AFC qualifiers in general were a bit of a struggle against decent competition. They cruised through the second round, but the third was a different story. They won four, drew three and lost three in Group B and were beaten out for direct qualification by Saudi Arabia and Japan. Critically, they didn’t beat either of those teams with a draw and a goal to show for it across the four matches. An 84th-minute winner earned them a 2-1 victory over the United Arab Emirates in the fourth round to get them their playoff shot against Peru. Nevertheless, it’s five straight World Cups qualified for, but Australia haven’t won a match since 2010. So it wasn’t easy, and the supercomputer isn’t particularly impressed, giving them a 43.5% chance of finishing last.

That’s still slightly higher than Tunisia (45.4%), a country still looking for their first taste of the knockout rounds and their third World Cup match won in total. One of those did come in a promising 2018 showing. They opened the tournament with a 2-1 loss to England, and that required a Harry Kane stoppage-time winner. Tunisia then followed a 5-2 defeat to Belgium with a 2-1 win over Panama. More recently, they’re coming off a 5-1 defeat to Brazil, but that was preceded by seven unbeaten including a 2-0 win over Chile and a 3-0 win over Japan to win the four-team Kirin Cup earlier this year.

You hate to predict exactly what the predictor says – the supercomputer doesn’t need any additional ego boosts.

France are going to get it together and win this group, but they’re going to lose in the round of 16 to surprise second-place Group C finishers Argentina. Denmark are going to progress with two wins. But, sorry supercomputer, Tunisia are finishing third after beating Australia. It’s not going to be a tournament to remember for the Socceroos. That Australia-Peru match back in June was brutal to watch, and they’ve got a lot of convincing to do to prove they belong here.