The Most Fouled Player in World Cup History: Diego Maradona | The Analyst 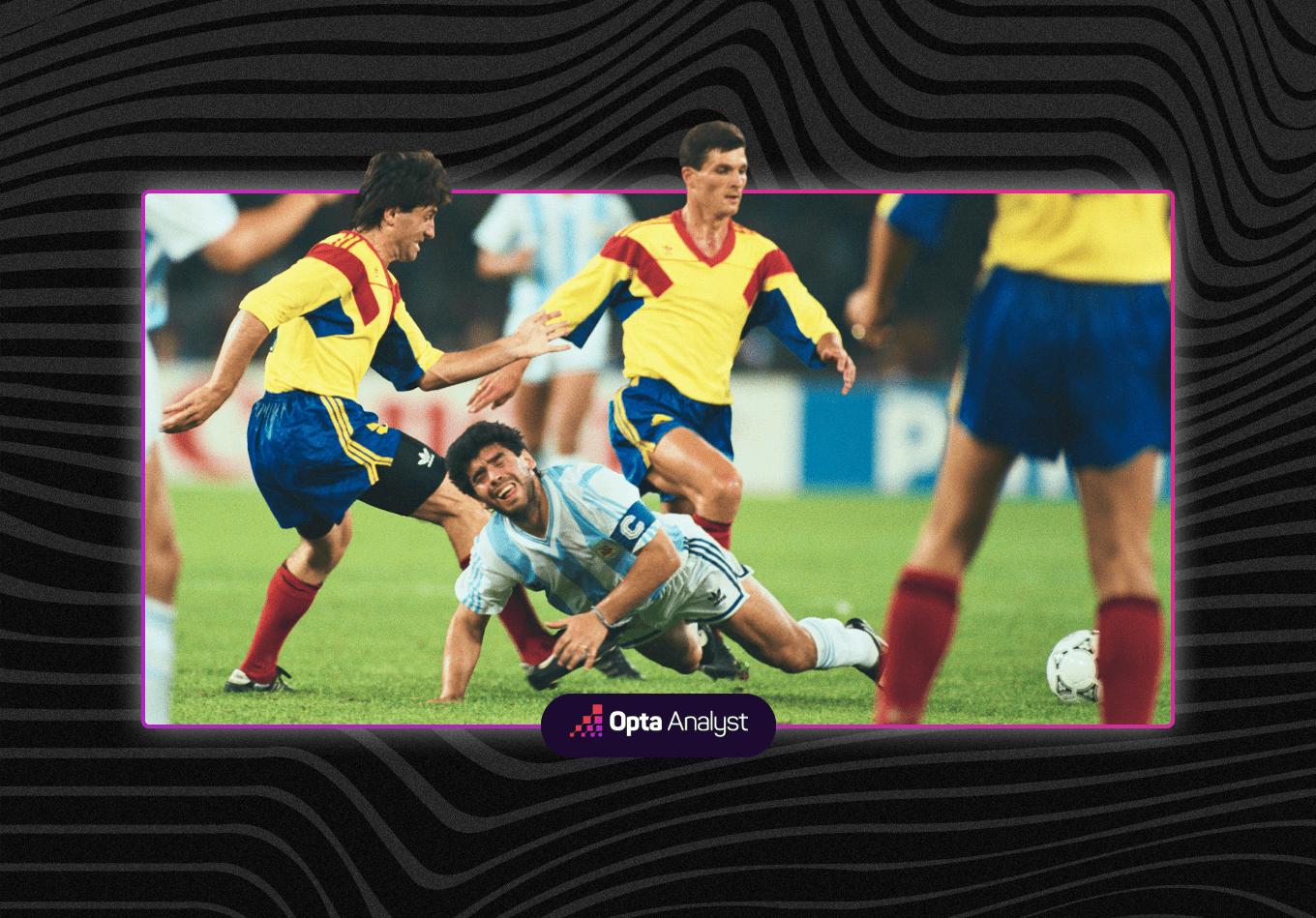 The Most Fouled Player in World Cup History: Diego Maradona

When the jersey that Diego Maradona wore in Argentina’s win against England at the 1986 World Cup sold for more than £7m earlier this year [you’d need to win the Opta Million more than seven times to raise enough cash to match the bid], Peter Shilton — the goalkeeper beaten twice by Maradona in that iconic game — was not impressed. “I wouldn’t even use it around the house, not even to clean the dishes in my bungalow”, the glovesman seethed. In the Shilton household, memories of Maradona outleaping the goalkeeper to score with his hand in the 1986 quarter-final is an unforgivable offence, a crime that echoes down the ages, a blatant robbery. But that day Maradona went on to score another goal, arguably the best goal in World Cup history, an aesthetic marvel that must at least even out the naughtiness of his first goal. Maradona’s goals against England in 1986 come as an indelible pair, like a sort of footballing double album. There’s something for everyone there, unless you’re a member of House Shilton.

Perhaps you’re not quite ready for the Diego Maradona redemption arc but delve into the data a little deeper and you can see why the Argentine might have felt within his rights to bend the rules a little, because no-one else respected the rules when it came to dealing with him. On that hot afternoon in the Estadio Azteca, seven of the 16 fouls that England conceded were on Argentina’s iconic number 10, so hard was he to deal with, and so hard did opponents go in on him. And it wasn’t just England who targeted Maradona. Across the entire 1986 World Cup, he was fouled 53 times, a record total in any World Cup between 1966 and 2018.

Four years later, as a semi-shambolic Argentina somehow reached the final once again, Maradona clocked up another 50 fouls won and — incredibly — the third highest total of fouls on a player at a single World Cup is 36 on, yes, Diego Maradona at Spain 82, a tournament in which he featured in only five games. Let’s put it a bit more simply: in the three World Cups between 1982 and 1990, 2.5% of all fouls made anywhere in the tournament, in any game, were on Diego Maradona. It’s a level of punishment that justifies a hat-trick of handball goals at the very least.

The 1986 World Cup also contained the infamous Mexico vs. Paraguay game that was paralysed by a record 78 fouls, a haunting snapshot of just how negative the game had become and how the overworked officials of the 1980s were whistling like ravers from the following decade. Combine that with time-wasting and a goals-per-game-rate that reached a grim World Cup nadir in 1990 and it is clear that this was a sport in need of a major reboot. Maradona would return to Italy after the 1986 World Cup and lead Napoli to their first ever Serie A title in 1986-87 but almost as impressive was Como finishing in ninth place with a record of 16 goals from 30 games. That Maradona was able to weave his magic in a footballing environment as airless as this is a true marvel.

Every footballer is a product of their era but it would be fascinating to see Diego Maradona play a World Cup under modern conditions. On Tuesday Lionel Messi begins his fifth World Cup having been fouled a total of 53 times, as many as Maradona was subjected to in 1986 alone, yet it is Messi who is still waiting for his iconic World Cup moment. Right now no-one is claiming they wouldn’t clean dishes in a bungalow with a Messi shirt but there’s still time for him to create magic — and enemies — at Qatar 2022. Let’s hope he can.