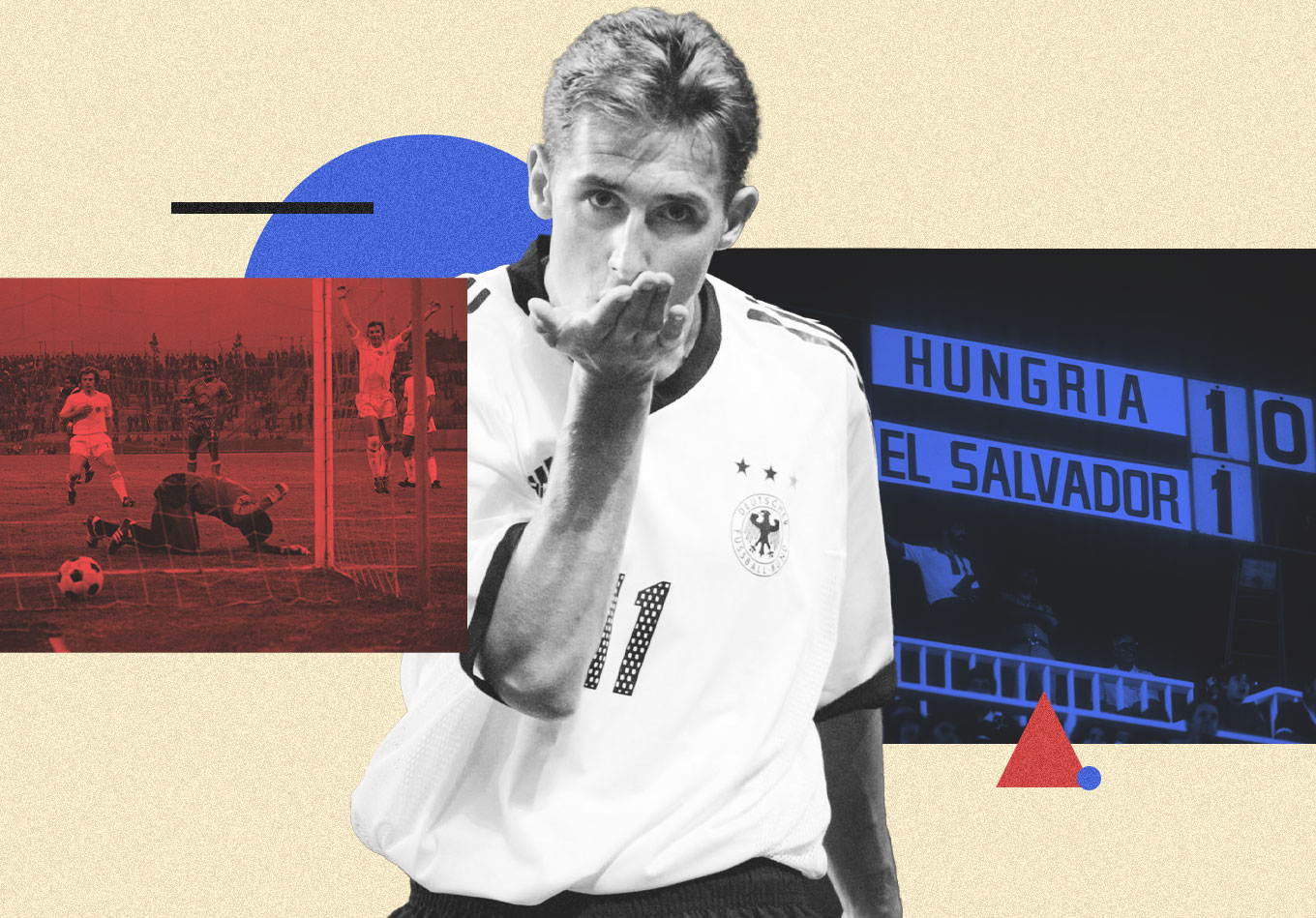 As the 2022 World Cup in Qatar creeps ever closer, we look back at some of the most lopsided matches in the history of the men’s World Cup.

That honour is jointly held by Hungary and Yugoslavia, who have each recorded nine-goal victories. The record in the Women’s World Cup is held by the United States, who beat Thailand 13-0 in the group stage of the 2019 FIFA Women’s World Cup.

POV: You’re the Hungarian national team and you’re the only side to score 10+ goals in a single men’s World Cup game. It follows that you’re the only team to register a double-digit win in World Cup history, and the eventual winning margin of nine goals is a joint World Cup record.

But, after losing to reigning champions Argentina in your following match – a game in which, somehow, Argentina are allowed to take both the first-half and second-half kick-offs – you face Belgium. A 1-1 draw in that final game and you, Hungary, are eliminated at the group stage of the 1982 World Cup in Spain, despite registering a historic victory.

In that mauling against El Salvador, it was Hungarian substitute László Kiss that stole the show. Coming off the bench in the second-half Kiss scored a hat-trick. Not only is his treble the only World Cup hat-trick by a substitute, but it’s the fastest ever hat-trick in a World Cup, grabbing his three in the space of seven minutes.

Team-mate Laszlo Fazekas bagged himself a brace, as Kalaman Meszoely’s side put El Salvador to the sword.

Italy would eventually win this World Cup, beating West Germany in the final 3-2.

The Hungarians had been no strangers to huge World Cup wins, dishing another one out 28 years earlier against South Korea. This one came courtesy of Hungary’s Golden Team of the 1950s, built around a core of six key players: Ferenc Puskás, Sándor Kocsis, Nándor Hidegkuti, Zoltán Czibor, József Bozsik and Gyula Grosics.

Gusztav Sebes’ side were huge favourites to win the tournament in Switzerland, and they opened the competition is superb style, smashing South Korea 9-0.

Puskas – a year after his dissection of England at Wembley – netted twice, but it was Kocsis who exploded out the blocks. He scored a hat-trick in this game and then went on to score four in Hungary’s 8-3 group stage win over West Germany to become the first player to score multiple hat-tricks in a single World Cup.

With two more goals in each of Hungary’s quarter-final and semi-final wins, Kocsis took his tournament tally to 11 – at that time a record for the highest number of goals scored in a single tournament.

But despite coming up against a West Germany side in the final that they had beaten 8-3 during the group stage, the Magical Magyars were to lose the reverse fixture 3-2 in what became known as the Miracle of Bern.

Hungary’s 1954 World Cup performance is record-breaking. They hold the record for the most goals in a single edition, the highest aggregate goal difference, and the highest goals per game rate. The only thing they didn’t win was the trophy…

Group 2 of the 1974 FIFA World Cup was a strange one. The pool comprised of defending champions Brazil, alongside Scotland and Yugoslavia, as well as first-time qualifiers Zaire.

Brazil, Scotland and Yugoslavia drew their games against each other, so the key to qualification rested on goal difference. Basically, how much could each of them beat Zaire by.

Scotland managed a 2-0 victory, but Yugoslavia’s 9-0 victory saw them top the group table with a huge +9 goal difference.

Yugoslavia raced out into a three-goal lead in the first 20 minutes. In response, Zaire’s manager Blagoje Vidinić – a former Yugoslav international himself – decided to substitute his goalkeeper. Off came Kazadi Muamba and on came 5-foot-4 Dimbi Tubilandu.

Within a minute he’d conceded himself. He’d have to pick the ball out of his net a further five times that evening.

The Yugoslavs were six goals to the good at half-time – the most goals scored in the first half of a World Cup game in history – and Dušan Bajević helped himself to a treble.

However, despite topping their group in the first round, Yugoslavia lost all three of their matches in the second group phase, scoring just two goals in the process.

In a nice twist, Yugoslavia are actually on the receiving end of the joint-biggest defeat in European Championships history (a 6-1 loss against the Netherlands in Euro 2000), and to date they’re the only side to concede six or more goals in a single Euros game. With the average age of their starting XI just 25 years and 351 days old against Zaire, the Yugoslavia side are the youngest team to appear on our list.

Back in the days when the World Cup was a straight knockout affair, this quarter-final tie between Sweden and Cuba is technically the biggest World Cup win to take place outside the group stages.

The Swedes progressed through their last-16 tie with Austria thanks to a walkover, while Cuba beat Romania following a replay.

A 7,000-strong crowd in Antibes watched Sweden put eight goals passed Cuba. Both Gustav Wetterström and Harry Andersson helped themselves to a hat-trick, and this fixture remains the only match in World Cup history where two players from the same team have scored a hat-trick in the same game.

France had to play seven matches to win the 2018 World Cup in Russia. In 1950, Uruguay only had to play four on the way to securing their second World Cup win.  In fact, their first triumph in 1930 only required four games as well. Both tournaments are the fewest matches required for a team to lift the Jules Rimet trophy.

Uruguay’s first and only group game in 1950 came against Bolivia. France were meant to join the pair in Group 4, but had withdrawn after the draw, citing the amount of travel that would be required to play their group matches.

So, while the likes of Brazil, Yugoslavia, Spain and England needed to battle it out in four-team groups, where only the top team went through, Uruguay had a one-off game against Bolivia.

It ended up being a routine victory. With four goals in either half, Juan Lopez’s side were comfortable 8-0 winners. Oscar Miguez helped himself to a hat-trick, one of only three Uruguayan players to achieve this feat.

1950 was the only World cup tournament not decided by a one-match final, with Uruguay winning a final group stage against the Brazilians, Swedes and Spanish.

Germany’s 8-0 victory at the 2002 World Cup against Saudi Arabia is the biggest World Cup win in the 21st Century.

After 20 minutes, Miroslav Klose opened the scoring on his World Cup debut, stooping low to head in a skidding cross from the left.

It was his first World Cup goal, and it wouldn’t be his last. Just five minutes later he’d added a second with a trademark bullet header. The World Cup’s leading goalscorer completed his hat-trick and Germany’s fifth midway through the second half, with his third header, turning in Bernd Schneider’s cross.

Not only has Klose scored more World Cup goals than any other player, he’s also scored more headers than anyone else as well, ahead of compatriot Gerd Müller.

Across his career, Klose scored 16 times in 24 appearances across four separate tournaments. The only other players to score in as many as four World Cup tournaments are compatriot Uwe Seeler, Portuguese Cristiano Ronaldo and Pelé.

Less than 12 months after their 5-1 humbling by England in Munich, Germany would reach the World Cup final in South Korea and Japan, where they would finish runners-up to Ronaldo’s Brazil 2-0 in the final.

The Next Biggest World Cup Victories:

Biggest Win in a Third-Place Playoff:

Biggest Win by a Host Nation:

Biggest Win Against the Eventual Champions: